Cremona: City gave birth to Stradivari and his violin 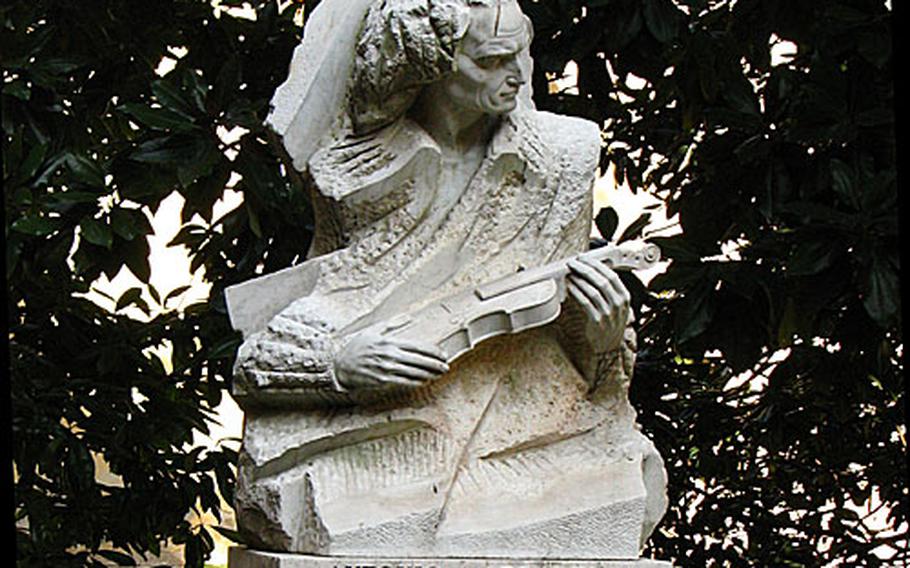 A statue of Antonio Stradivari stands outside the Museo Stradivariano. Visitors can see how violins are made. They can also hear a Stradivarius violin played by going to the Palazzo del Comune. (Mary Kieran / Special to S&S)

A statue of Antonio Stradivari stands outside the Museo Stradivariano. Visitors can see how violins are made. They can also hear a Stradivarius violin played by going to the Palazzo del Comune. (Mary Kieran / Special to S&S) 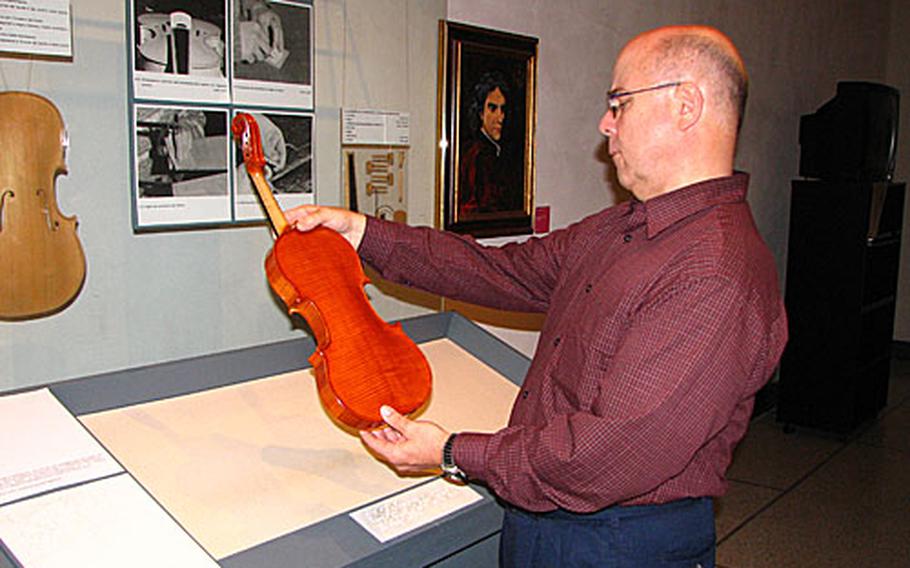 At the end of the demonstration at the Museo Stradivariano, visitors can assemble the pieces of a finished violin under the watchful eye of Stradivarius himself, as he watches sternly from a nearby portrait. (Mary Kieran / Special to S&S) 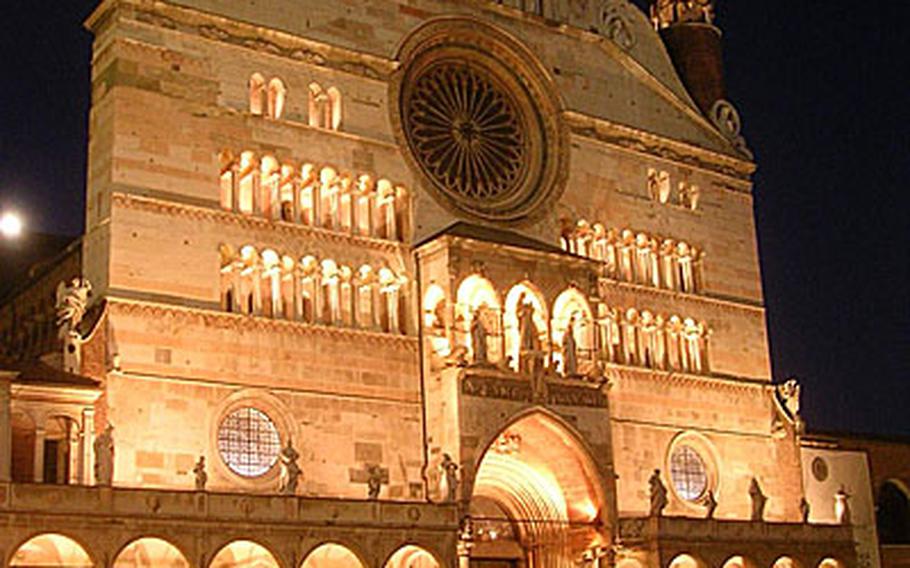 Cremona’s Duomo is a fine example of Lombard Romanesque architecture, with its graceful scrolls decorating its marble front. It is one of the sights on the city&#39;s walking tours. (Mary Kieran / Special to S&S)

The sounds shimmering off the strings of the 280-year-old Stradivarius violin held each member of the audience in rapt attention.

I sat among them, clutching a 1.50-euro ticket that had admitted me to the Saletta dei Violini in Cremona &mdash; the former home of Antonio Stradivari &mdash; for this rare listening experience.

There are three main reasons for visiting Cremona, Italy, a picturesque medieval town on the banks of the Po River about an hour from Milan. It is the birthplace of Antonio Stradivari and the violin, it has the tallest bell tower in Italy and it is believed to be where the white nougat candy with nuts called torrone originated.

We were eager to see the city and buy its candy, but foremost was the chance to hear one of the world&rsquo;s greatest musical instruments being played. It has been said that these violins must be played several times a year or they will lose their sound and quality.

At about noon, we joined about 30 people in a long narrow room in the Palazzo del Comune, waiting for something (we were not sure what) to happen.

We were asked to take a seat on heavy wooden chairs at wooden tables. A distinguished-looking man with gray hair entered the room carrying a violin. He made a brief announcement in Italian and then began to play.

The violin has been called the instrument that comes the closest to the human voice. During our mini-concert, the violinist played snatches of several pieces, giving us a roller-coaster ride through the emotions that the violin&rsquo;s range of high and low notes can evoke.

With eyes closed, I was easily transported by the rich sound through time back to the age of white-powdered wigs and intimate chamber orchestra recitals.

After the 15-minute performance, we filed into the violin museum next door. Glass cases protected an impressive collection of 18th-century instruments, including the violin, called Vesuvius, that we had just listened to. It was crafted in 1727 by Stradivari himself.

Today, there are about 600 Stradivarius instruments in existence, down from the 1,100 he created during his lifetime. Last year, one made in 1707 was auctioned for $3.54 million, making it the most expensive musical instrument ever sold at auction.

For more than 250 years, others have tried to discover the secret of what makes the uniquely beautiful sound of a Stradivarius violin. Some say it is the quality of wood that was hand-picked by the master violin-maker, much like Michelangelo chose just the right marble for his sculptures. Others are sure it comes from the secret ingredients that made up the varnish that was applied, coat by coat, at the end of construction. Still others wonder if it was the hardened insecticide used to treat the wood to protect it from pests.

Nineteenth-century violin virtuoso Nicolo Paganini was said to claim once that Stradivari&rsquo;s beautiful sound must have come from &ldquo;the wood of trees on which nightingales sang.&rdquo;

The tradition of making high-quality violins continues in Cremona today. The International School of Violin Making trains people from around the world in the art of making exceptional violins with beautiful sound. There are about 50 violin shops in Cremona using the same techniques from centuries ago to produce top-of-the-line handmade violins.

You can go to Museo Stradivariano in Cremona to find out more about violin making. There you can walk yourself through the production process in a hands-on demonstration.

Displays show how the instrument starts from a solid block of wood. Maple, pine and spruce are used for different parts of the construction. These pieces of wood are carefully dried, carved and shaped to produce the quality sound that the world has come to expect from Cremona violins.

At the end of the demonstration, you can assemble the pieces of a finished violin under the watchful eye of Stradivari, as he looks down on you sternly from a nearby portrait. If the master is not smiling in his picture, it is possibly because he had to wait a century after his death for his violins to receive the praise and popularity they deserved.

After visiting the museum, try one of Cremona&rsquo;s historic walking tours, as detailed on a map from the tourist office in Piazza del Comume. We enjoyed visiting the flamboyant Palazzo Trecchi with its decorative &ldquo;trompe l&rsquo;oeil&rdquo; and sipping coffee in its sunny courtyard.

Then climb to the top of the Torrazzo in the medieval Piazza del Comune for a panoramic view from the 370-foot-tall bell tower. The tower, built in the 1260s, is nearly as tall as Milan&rsquo;s Gothic cathedral.

The 502 steps to the vista point start out as a wide stone stairway in spacious stairwells. Window openings along the way show random views of the smaller church towers and the roofline below.

The views off to the horizon are thrilling for those who don&rsquo;t suffer from vertigo and are brave enough to look down from the equivalent of a 30-story building. Red-tiled rooftops zigzagged off in all directions. People the size of ants crawled along in the streets far below. All street noises disappeared, as we stood high above the Saturday-morning market.

Back on earth, don&rsquo;t leave for home without trying some of Cremona&rsquo;s heavenly &ldquo;torrone.&rdquo;

The story goes that this concoction of egg whites, honey and almonds was invented in the 13th century to celebrate the wedding of Bianca Maria Visconti to Francesco Sforza. Its name and shape are said to have been inspired by Cremona's very own Torrazzo.

Mary Kieran is a freelance writer living in Italy. Write her at wordsforsale@hotmail.com.

Know & Go&bull; Visitors can pick up a map of Cremona at the tourist information office in the Piazza del Comune across from the Torrazzo. It includes tours of the town with varied themes: city and music walk, Renaissance walk, Roman walk, Middle Ages walk and Spanish 18th-century walk. It also shows where to find parking.

&bull; The Palazzo del Comune is open 8:30 a.m. to 5:15 p.m. Tuesday through Sunday and 9:15 a.m. to 12:15 p.m. and 3-6 p.m. on holidays. It is open Mondays from April 1 through June 30 and Sept. 1 to Oct. 31; closed Mondays rest of the year. Admission is 6 euros for adults, 3.50 euros reduced rates (including children, students and groups), and free for children younger than 6. A spokeswoman for the city tourist office said tickets to hear a Stradivarius violin played can be purchased at the bookshop in the city hall. She said reservations are required and recommended calling at least 15 days in advance. The number is (+39) 0372-20502.

&bull; Warning: Watch where you park on Friday night to avoid being towed Saturday morning before the city&rsquo;s market, 6 a.m. to 2:30 p.m. It cost me 112 euros and most of a Saturday morning to get my car back. Ignore warning signs in Italian at your own peril.

&bull; For more information on Cremona, see the following Web sites: www.italyworldclub.com/lombardia/cremona/cremona.htm (in English) and http://www.rccr.cremona.it (in Italian).