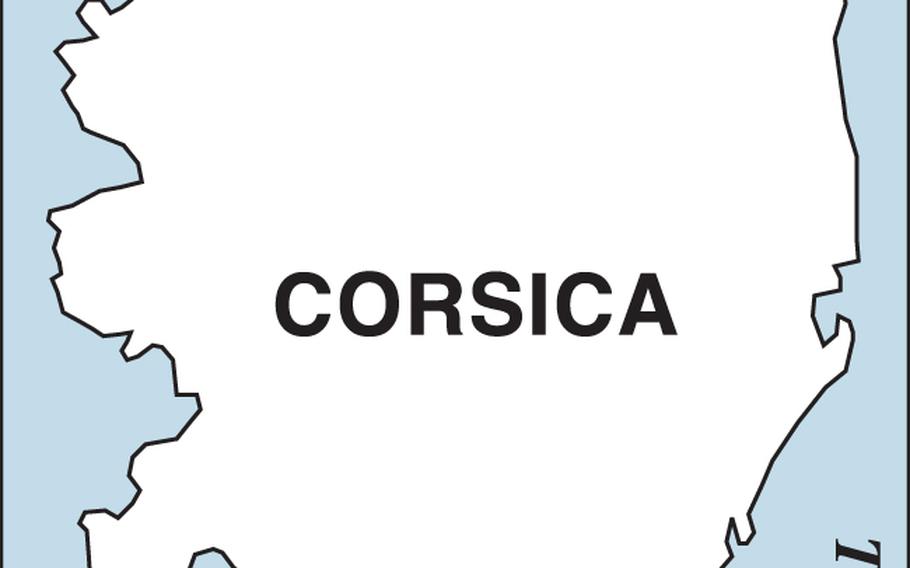 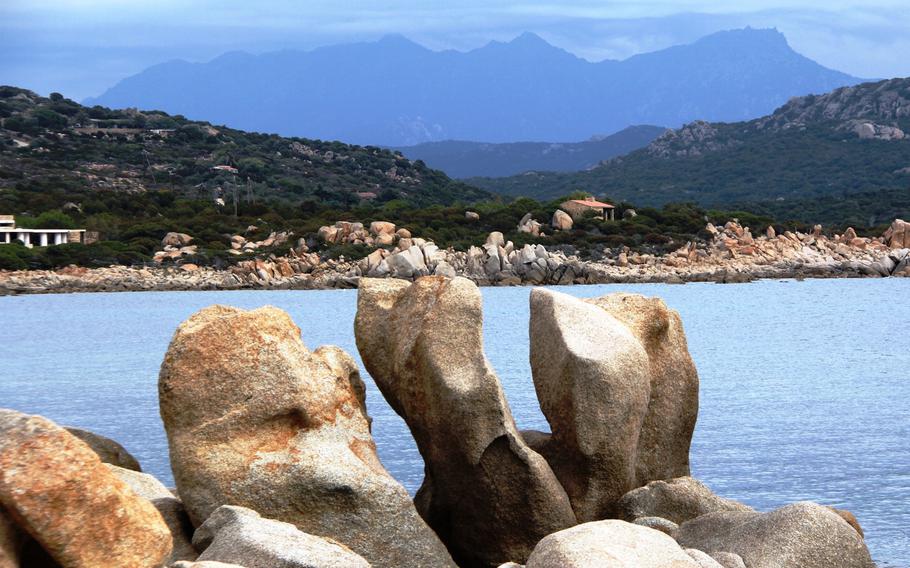 On the French island of Corsica, rocky fingers along the coast seem to grow out of the sea. (Leah Larkin/Special to Stars and Stripes) Rocks that have been amazingly sculpted by centuries of wind and water abound in Corsica. ( Leah Larkin/Special to Stars and Stripes) Steep stairs at the Escalier du Roi d'Aragon in Bonifacio offer adventurers a breathtaking descent to the sea. (Leah Larkin/Special to Stars and Stripes) After descending the 187 steps of the Escalier du Roi d'Aragon (King of Aragon's Stairway), it's still wise to watch your step as you walk along a rocky path near the water's edge. ( Leah Larkin/Special to Stars and Stripes) 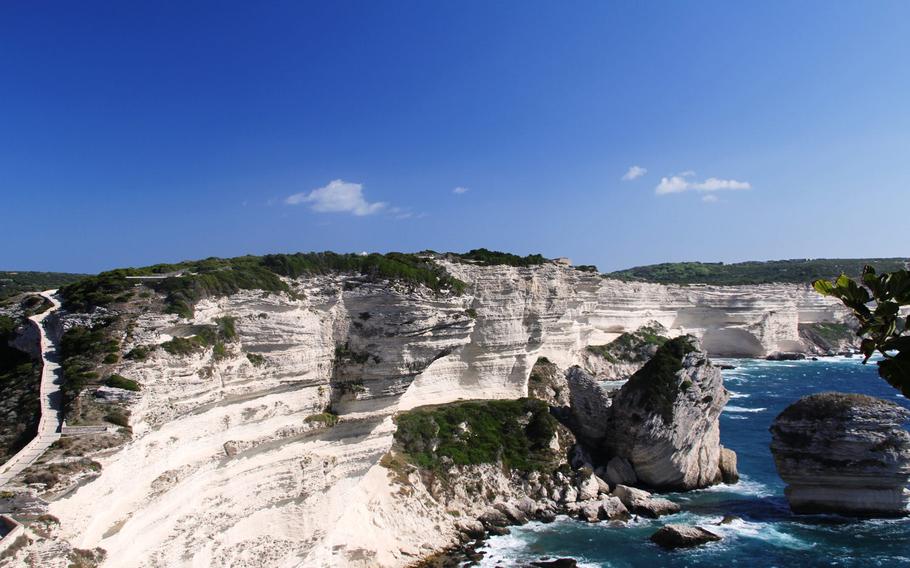 The dramatic coastline near Bonifacio, a city with an Italian flair and southern Corsica's star attraction. (Leah Larkin/Special to Stars and Stripes) 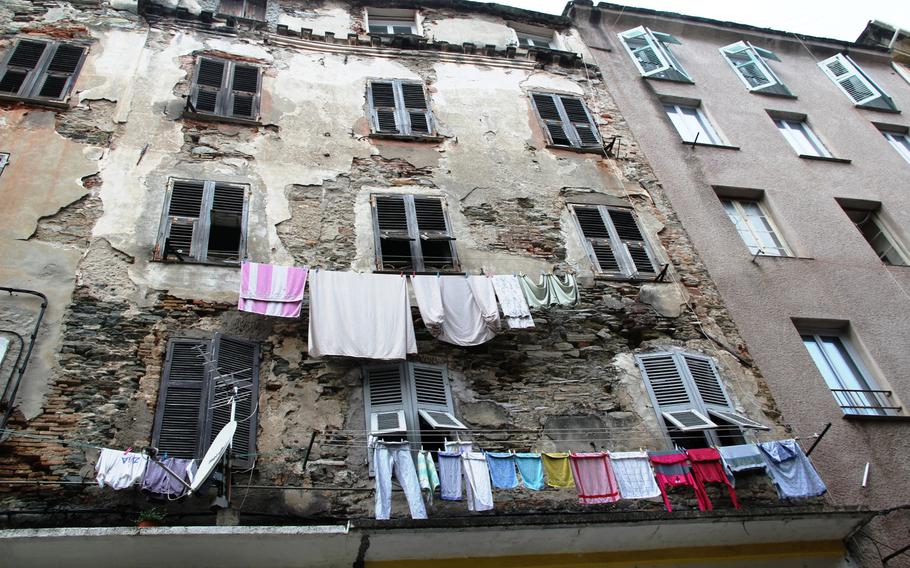 Laundry day in the town of Bastia, on the island of Corsica. (Leah Larkin/Special to Stars and) 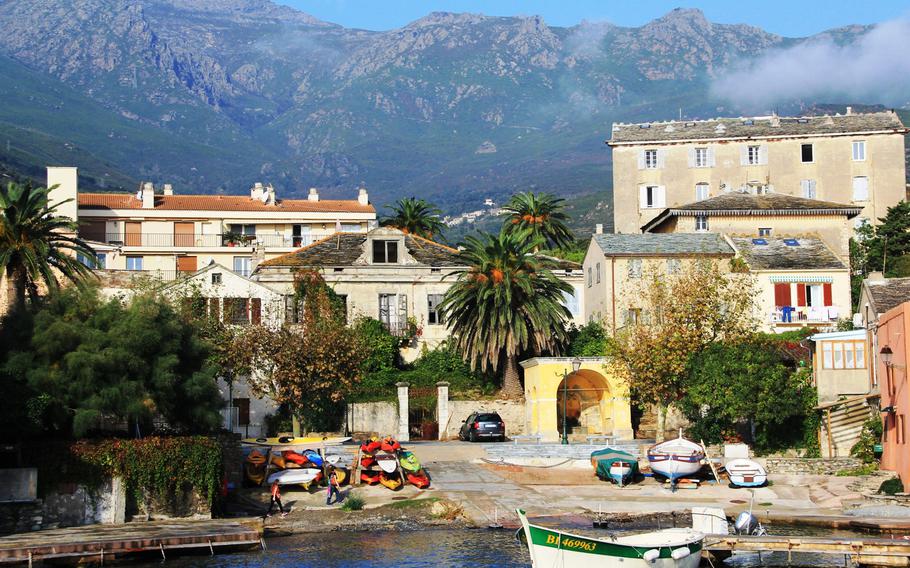 The picturesque harbor at Erbalunga, an old fishing village on Cap Corse, which was once an artists colony on Corsica. ( Leah Larkin/Special to Stars and Stripes) Lac de Melu is in the Vall'e de la Restonica, a pretty river valley amid Corsica's gray-green mountains. According to the guidebook, the lake was a one-hour trek away, but we scrambled over rocks for more than two hours before reaching it. (Leah Larkin/Special to Stars and Stripes)

It was idyllic. A small hotel perched on a ridge at the edge of the sea with the Mediterranean waters gently slapping the rocks directly below the balcony of our room. After arrival, I immediately changed into my bathing suit and dashed to the hotel beach, just a miniscule patch of sand. The water was perfect. I swam and swam and swam, with no one in sight.

The Mediterranean island of Corsica is known for its beaches — much bigger than the tiny one adjacent to our hotel. Glorious expanses of golden sand interrupted by jagged, rocky cliffs stretch for miles along the east and west coasts of the land mass, the fourth-largest island in the Med and 110 miles south of mainland France. Secluded, romantic coves beckon — places where you are alone with nature.

Nature seems untarnished in Corsica. Both along the coast and in the mountainous interior are vast, pristine areas bordering on desolate: no towns, no hotels, no commerce. Of course, there are some lively and fun coastal cities.

But it’s nature that attracts. Gil Chopin, proprietor of the coastal Hotel du Golfe in Tizzano, where we stayed, told me he was born in the town but worked in Paris and other cities. “I missed nature, the sea.”

“We live in harmony with nature here,” he said. “Each day is different. Each day I am astonished. For me, this is paradise.”

Tizzano, our home for five days in early October, is indeed a bit of paradise, one winding road down the mountain from the inland town of Sartène. Winter Tizzano population: 30 humans and lots of felines. In summer: 3,000 tourists. In October: husband Bicycle Bob and me, the locals, a few other tourists and the friendly cats. All four of the town’s restaurants were shut. We made do with picnics on the hotel balcony, enjoying soothing views of the Med.

That was the downside of an October visit. Many shops, hotels and restaurants had already closed for the season. However, we were blessed with still warm weather and mostly blue skies — and tranquility.

Besides all the water activities — swimming, sailing, surfing, kayaking, diving — Corsica gets top ratings for hiking. It is one of few places where you can conquer a mountain trail in the morning, then cool off in crystal seas the same afternoon.

The Grande Randonnée 20 is the island’s famous trek, a 110-mile trail that takes at least 15 days to complete. But there are many shorter, spectacular hikes, as well as opportunities for more challenging adventure, such as canyoning, rock climbing, mountain biking, zip lining and rafting.

We set off to Lac de Melu in the Vallée de la Restonica, a pretty river valley amid gray-green mountains near the interior town of Corte. According to my “Lonely Planet” guidebook and the sign posted at the beginning of the trail, it was a one-hour trek to the lake. Maybe for Himalayan Sherpa. We scrambled over rocks huffing and puffing for more than two hours before reaching the elusive mountain lake.

Rocks abound in Corsica—not just on mountain trails. Fantastic, futuristic rock formations sculpted by centuries of wind and water seem to grow out of the sea. We hiked past many on a walk from the edge of Tizzano through the coastal maquis, where thyme, lavender and sage flourish.

There were even more rocks at the Filitosa archaeological site, where we stopped en route to Tizzano after disembarking from our overnight ferry ride at Ajaccio, Corsica’s largest town and the birthplace of Napoleon Bonaparte. Artifacts dating to as early as 3300 B.C. have been found at Filitosa, where ancient civilizations lived in caves. During the megalithic period they erected menhir statues, granite monoliths, carved to represent human faces or entire figures.

Bonifacio, an amazing two-level town in the far southwestern corner of the island, perches precariously atop a rock cliff on a thin peninsula. Skinny streets twist past ancient buildings, including numerous churches, in the haute ville, or upper town. We took on the challenge of the

Cap Corse, the island finger at the northern tip, was our destination for three days before we boarded the ferry in Bastia, a city at the base of the finger, for the trip back to Toulon, the French coastal town where our Corsican journey began.

We drove along the Cap coast and through the middle of the peninsula over roads that averaged more than a dozen curves per kilometer and led past the island’s grape-growing area. Wine is the island’s principal export.

Bastia, a town of crumbling splendor, is fun to explore, including a busy harbor, imposing citadel, inviting hillside park, ancient churches — and shops that were open. Throughout the trip I had been searching for stores where I could purchase Corsican delicacies — cheese, sausage, honey, jams. No luck. In Bastia’s thriving shopping district, I found my treasures at last.

Years ago I visited Corsica with friends. We traveled around the island by Zodiac, a big rubber boat with an outboard motor, and camped on shore at night. Back then, I met a German resident of the island.

“We don’t have what Majorca offers, such as bratwurst and English breakfast,” he said. “People either like it here the way it is or never come again,” he said.

I loved it and am glad I finally had the opportunity to return to marvel at Corsica’s dramatic scenery and enjoy its untamed, rugged splendor.

Getting there Flights to Corsica’s principal cities (Ajaccio, Bastia and Figari) are available from many European cities. From Nice, Toulon and Marseille in France, as well as Genoa, Livorno and Savona in Italy, ferry service is offered, both overnight trips and faster voyages on high-speed hydrojets. Ferries also run between Corsica and Sardinia.

Accommodations Besides hotels, Corsica offers gites d’etape (hikers lodges), chambres d’hôtes (bed and breakfasts), and camping sites. Prices for all are higher in July and August.

Recommendations: • Hotel du Golfe, Tizzano (www.hoteldugolfetizzano.com). A perfect coastal retreat. The simple but comfortable rooms all have balconies above the Med.

More information Tourist season runs from March through October, although we found much was already shut down for the season in October. July and August are high season.