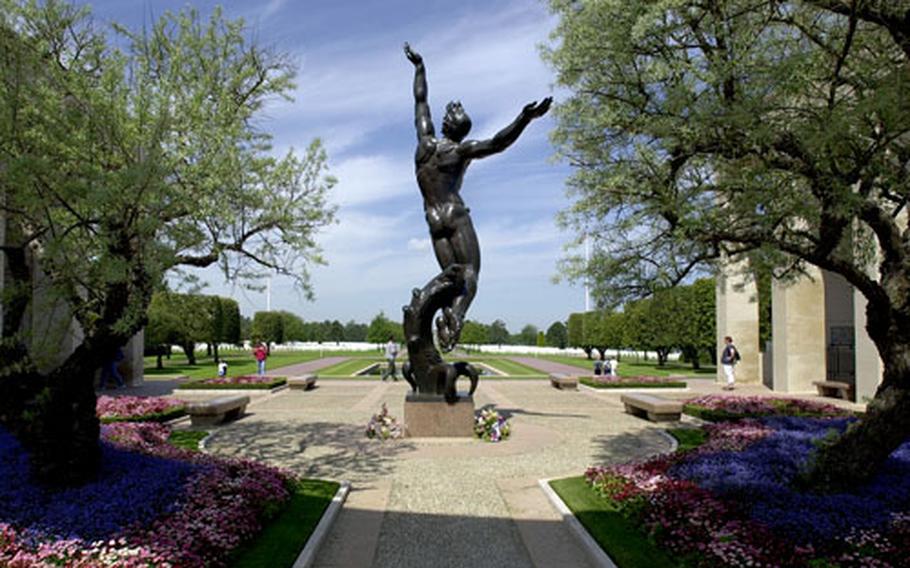 The statue "Spirit of American Youth" rises up from the memorial at Normandy American Cemetery, above the D-Day landing sites at Omaha Beach. It is one of the American cemeteries in Europe that will be holding Veterans Day ceremonies this weekend. (Michael Abrams / S&S)

The statue "Spirit of American Youth" rises up from the memorial at Normandy American Cemetery, above the D-Day landing sites at Omaha Beach. It is one of the American cemeteries in Europe that will be holding Veterans Day ceremonies this weekend. (Michael Abrams / S&S) 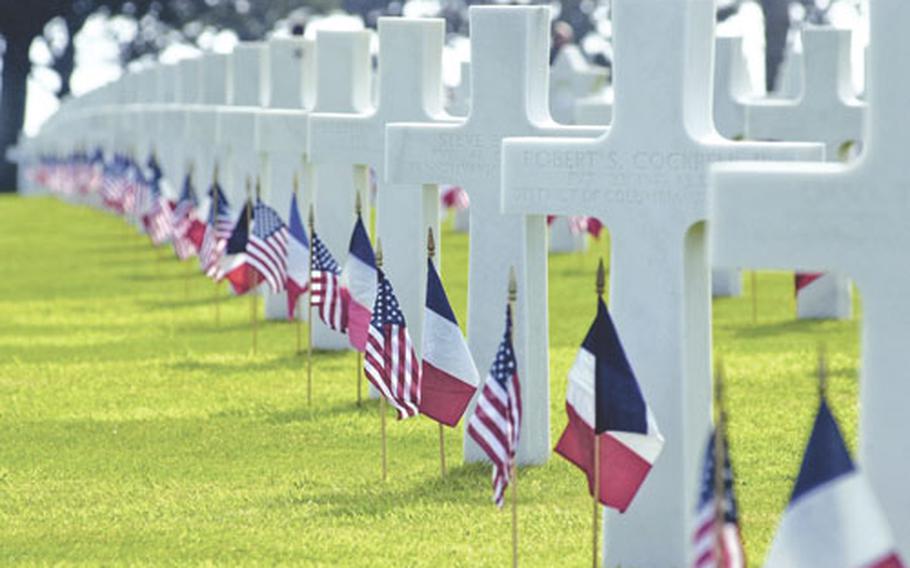 A row of crosses decorated with American and French flags for Memorial Day at Normandy American Cemetery. The cemetery, where 9,387 American war dead are buried, is on a cliff overlooking the D-Day landing sites at Omaha Beach. (Michael Abrams / S&S)

All American military cemeteries under the direction of the American Battle Monuments Commission will hold Veterans Day ceremonies this weekend. Most will include a reading of President Bush&#8217;s proclamation of Veterans Day and a wreath-laying, a commission spokesperson said.

For more information about these and other American cemeteries and monuments throughout the world, see the Web site of the American Battle Monuments Commission at www.abmc.gov. Click on &#8220;Commemorative Events&#8221; for a complete list of cemeteries and ceremonies. Click on &#8220;Cemeteries&#8221; for information on each location, including directions. The cemeteries are open 9 a.m. to 5 p.m. daily, except Christmas and New Year&#8217;s Day.

Some of the planned observances in Europe are:

&#182; Lorraine American Cemetery and Memorial, St. Avold, France: The observance begins at 11 a.m. Saturday. The presidential proclamation on the observance of Veterans Day will be read and a wreath laid by the American Legion.

The cemetery is just off the St. Avold exit from Autoroute 6, about three-quarters of a mile north of town and about three miles from the rail station.

&#182; Cambridge American Cemetery and Memorial, England: The 423rd Air Base Group of the U.S. Air Force at RAF Alconbury sponsors the Veterans Day commemoration each year. The observance begins at 11 a.m. Friday and will include a band and vintage aircraft flyovers as well as laying of wreaths and participation by local veterans groups.

The World War II cemetery is three miles west of the city of Cambridge. There are frequent trains to the city, and taxi service to the cemetery.

&#182; Flanders Field American Cemetery and Memorial, Waregem, Belgium: Beginning at 11 a.m. Saturday, the ceremony at this World War I cemetery will include a wreath-laying by the American Battle Monuments Commission and a reading of the presidential proclamation.

The World War I cemetery is on the southeast edge of town of Waregem, just off E-17, about 45 miles west of Brussels. Taxi service is available from the station in Waregem.

Transportation is available to military members and dependents on a space-available basis; the bus departs the Spangdahlem Commissary at 8:15 a.m. The cemetery is within the city limits, about three miles from the city center.

The cemetery is in the village of Margraten, six miles east of Maastricht.

&#182; Normandy American Cemetery and Memorial, Colleville- sur-Mer, France: A wreath will be laid by local officials and the presidential proclamation read beginning at 9 a.m. Saturday. The World War II cemetery is just east of St. Laurent-sur-Mer.

&#182; Suresne American Cemetery and Memorial, France: The observance will begin at 10:15 a.m. Saturday with the wreath- laying and proclamation at this World War I American cemetery. It will proceed to Cemetaire Voltaire in the city of Suresne to honor veterans of the French military.

Suresne is a Paris suburb, about four miles from the city center and a 10-minute walk from the Suresne Mont Valerian station. The Eiffel Tower is visible from the mountaintop cemetery.