Carnival in Belgium a celebration of silliness 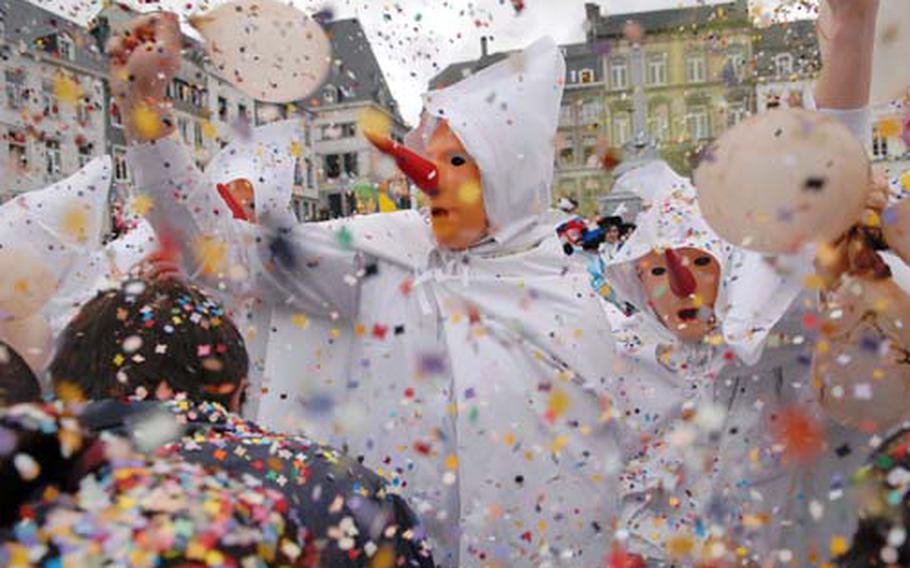 Blanc Moussis slap spectators with bladders and throw handfuls of confetti on Stavelot&#39;s Saint Remacle Square. The Round of the Blank Moussis, a sort of dance on the square, is the climax of the Laetare Sunday parade. (Michael Abrams / S&S)

It was because a prince-abbot denied his monks the enjoyment of a festival, that Stavelot, Belgium, has become the center of mid-Lent carnival fun, featuring perhaps one of the most distinct carnival characters, the Blancs Moussi.

More than 500 years ago, or so the story goes, the jovial monks were barred from festivities by the abbot. The townsfolk missed their presence, and in protest dressed in white hooded robes and strapped on pointy red carrot-shaped noses to protest their absence. And thus, the Blancs Moussis were born.

Throughout the centuries, the popularity of the festival, known as Laetare after the fourth Sunday in Lent, and the characteristic costumes ebbed and flowed. But after World War II, both were revived. Today the festival is three days of raucous mid-Lent partying.

Festivities get under way with a parade Saturday night. The Blancs Moussis &#8212; which means "clad in white" &#8212; do not make an appearance, but it seems most everyone else does. After the parade, the party continues in the festival tent at the Stavelot abbey.

On Monday afternoon, the folklore and musical societies make an appearance, and in the evening there is a closing ball at the abbey.

Sunday is the day of the Blancs Moussis.

They carry dried pig bladders used to bop people on the head, dangle dried fish in spectators&#8217; faces and stuff confetti down the backs of unsuspecting bystanders. They make a half-grunting, half-laughing sound as they do this.

Not surprisingly, this secret brotherhood seems to have no trouble recruiting.

The parade is about more than the Blancs Moussis, however. It is estimated that every third citizen of Stavelot is involved in it. Also organized in cliques and clubs, they march through the streets as clowns, penguins and pirates or in traditional dress of the area. They are joined by floats and marching bands.

At the end of the parade come the Blancs Moussis, bonking, stuffing and grunting, followed by cannon floats, blasting tons of confetti into the air, covering all in its way.

The culmination of this madness is the Round of the Blancs Moussis on St. Remacle Square. As the parade participants and spectators fill the square, the Moussis form a giant circle,striking the multitude with their bladders and fish while the confetti cannons continue to fire their paper salvos.

Know & goGetting there: Stavelot is in eastern Belgium, about 55 miles northwest of Spangdahlem, taking Autobahn 60, which turns into A27 in Belgium. Coming from the Schinnen area, take A79 and A2 in the Netherlands, which turns into A25, then A3 and A27. From Brussels, take A3 then A27. Exit at Malmedy and follow signs to Stavelot.

Trains arrive from various Belgian towns at nearby Trois-Ponts, with shuttle buses to Stavelot.

Dates and times: This year&#8217;s Laetare festival, the 507th, with the Blancs Moussis takes place March 21-23. The big event is the Grand Folk Parade, starting at 2 p.m. Sunday. The parade makes its way through the center of town, passes through the main St. Remacle square, and ends there about two hours later with the Round of the Blancs Moussis.

Admission: About 3 euros at entrance points on the edge of the city. There is parking on the outskirts of town.