Capri: Island visitors don’t have to be wealthy, but it wouldn’t hurt 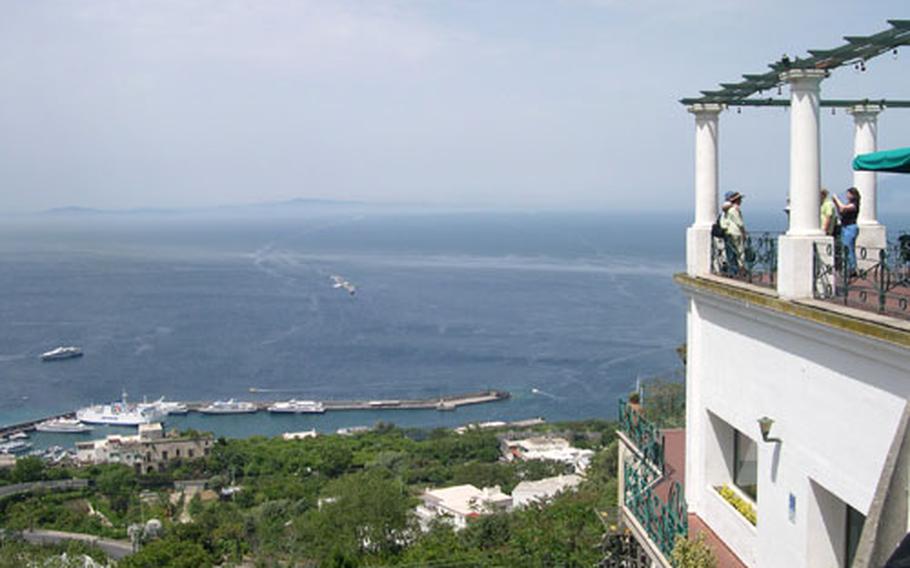 The views from many of Capri town’s streets are lovely, such as this one from near the bus stop from the port. In the distance is Naples. (Jason Chudy / S&S)

The views from many of Capri town’s streets are lovely, such as this one from near the bus stop from the port. In the distance is Naples. (Jason Chudy / S&S) 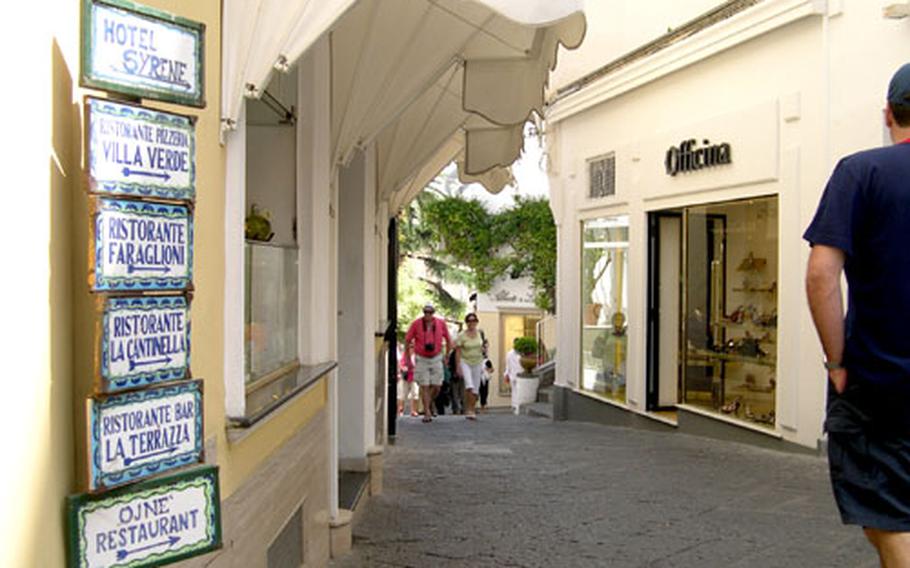 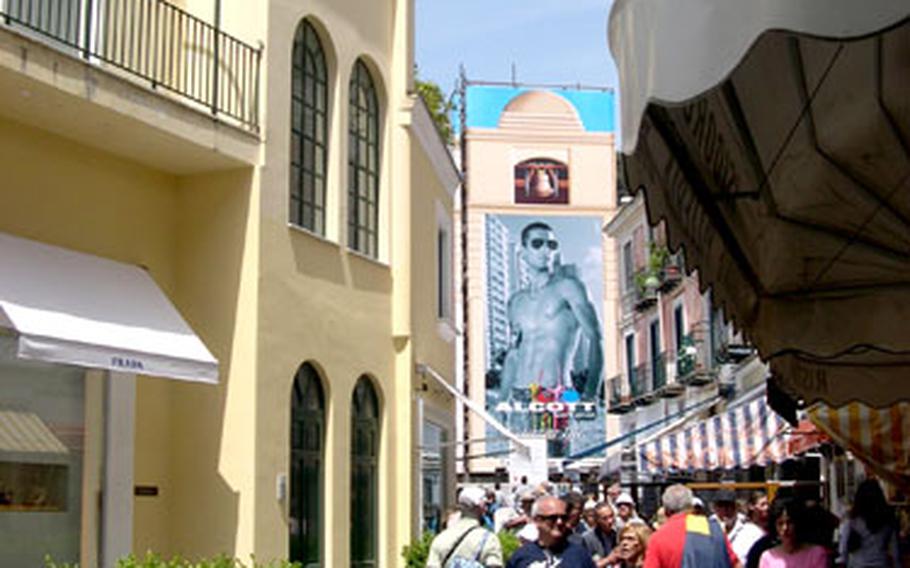 A view of a narrow Capri street. (Jason Chudy / S&S) 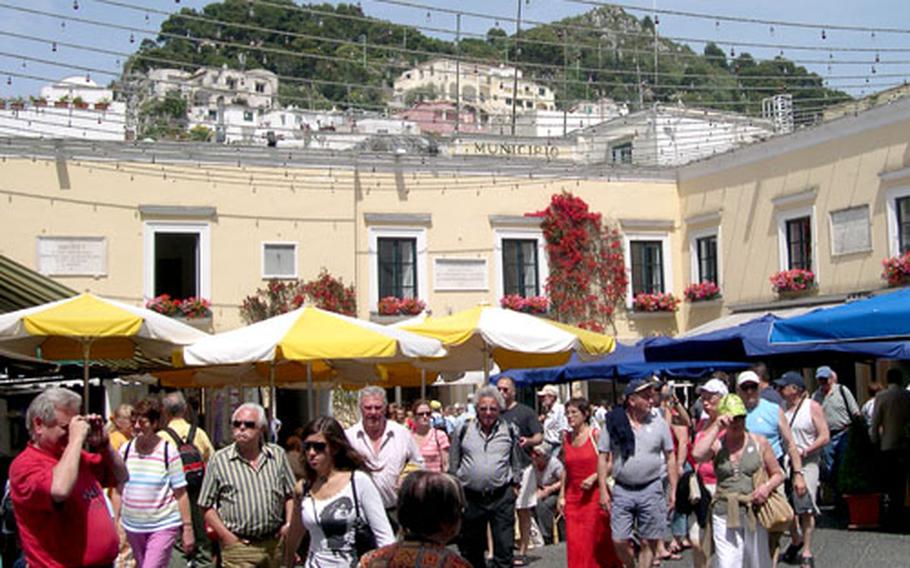 The Municipio, basically the town hall for Capri town, is a few dozen meters from the funicular station. The town’s main square is quite small and can fill up quickly, but many of the main streets radiate out from here. (Jason Chudy / S&S) 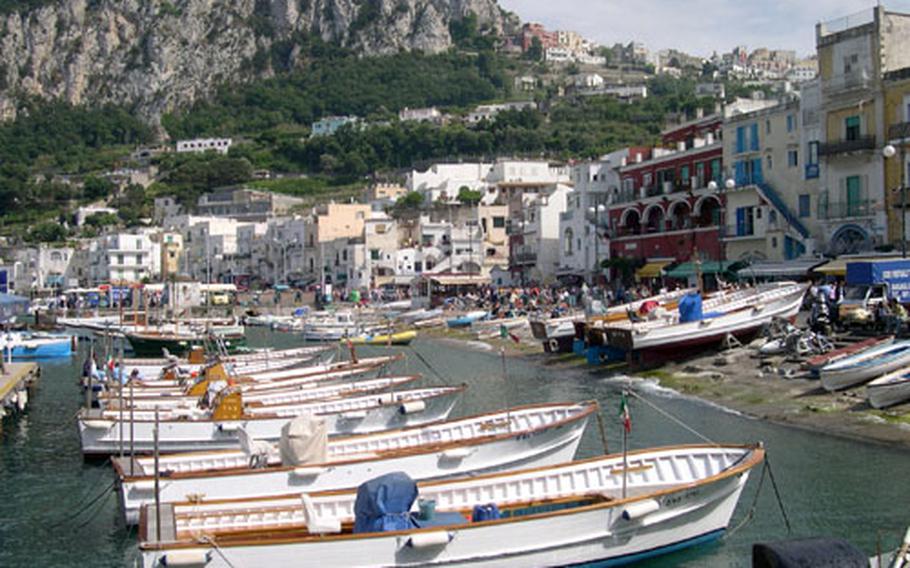 Small boats sit at anchor in Capri’s grand harbor. A hillside railway — funicular — travels between Capri Town and the port, but only when workers aren’t on strike. The boats are available to hire for trips around the island or to the famed Blue Grotto. (Jason Chudy / S&S)

Capri is probably Italy&rsquo;s best-known island, a playground for the world&rsquo;s rich and famous.

But on a recent trip to the island, located at the southwest edge of the Bay of Naples, there were more cruise-ship tourists than celebrities, and we, at least, sure weren&rsquo;t rich.

Add in a transportation strike that closed the famed funicular railway up to Capri town, and our day trip was more four-letter word than five-star paradise.

After a quick 40-minute hydrofoil ride from downtown Naples, we queued up with dozens of visitors in the bus line, waiting more than 30 minutes to catch the first one available, which in our case was to Capri town. Convertible taxis also ply the route between the port and two main towns, but for financial considerations, we stuck with the bus.

Capri is definitely at the cutting edge of fashion and high finance, but it also has a solid anchor in the past. The Villa Jovis on the island&rsquo;s eastern point, for example, was built for the Roman emperor Tiberius and covers more than 75,000 square feet. Some Roman remains still exist in the town of Capri, notably just outside of the funicular station.

The town of Capri sits centered on the long, narrow island, with views of the sea from two sides and steep mountain slopes on the other two. It&rsquo;s surprisingly small and dense, with narrow streets capable of carrying only foot traffic and small electric carts bustling back and forth with supplies or visitors&rsquo; baggage.

The streets were crowded and the stores exclusive and expensive. Grand hotels with swimming pools that overlook the sea lined one road we walked down, drawing envious glares from passers-by staying elsewhere.

Still, it&rsquo;s an incredible place to see. The grandeur and scenic beauty of Capri brings as many &ldquo;oohs&rdquo; and &ldquo;aahs&rdquo; as &ldquo;excuse me&rdquo; and &ldquo;oops, sorry&rdquo; as we wandered into other gawking tourists. The views are free and magnificent, when we could see through the throng of tourists.

A trip to Capri can be affordable. Hydrofoils from the Molo Belvedere terminal are around $28 round trip. Add 1.30 euros for a ticket on the funicular &mdash; or in our case, bus &mdash; to either Capri or Anacapri towns, and travel is relatively inexpensive.

We made it even cheaper with a special ticket from the base USO office that offered both the round-trip hydrofoil ticket and a multiple-course lunch at one of three restaurants in either town.

But it&rsquo;s the incidentals that will nickel-or-dime visitors to death.

A boat trip to the famed Blue Grotto costs 10 euros, and some Naples residents said they were told &mdash; once they were floating outside the grotto &mdash; that it costs extra for the driver to actually take the boat inside.

And it&rsquo;s not just nickels and dimes the merchants are after &mdash; they&rsquo;re after paper money, too. While waiting for the hydrofoil to start boarding at the port, we sat at a sidewalk cafe and ordered two small plastic bottles of water and a dish of gelato.

Our bill: 14 euros. We boarded the boat a few minutes later, poorer but wiser.

Capri is a once-in-a-lifetime trip for some people, and it is worth one visit, not only to say you&rsquo;ve been there, but also for the scenery and the history.

And if you&rsquo;re rich and famous, that would help, too.

On the QTCapri is located off Italy&rsquo;s Sorrentino Peninsula, about a 40-minute hydrofoil ride from downtown Naples.

TIMES: You can go any time of the year, although spring is probably best, before it gets too hot or too crowded. Avoid weekends, especially during tourist season.

COSTS: Round-trip hydrofoil tickets on the LN Navigazione Libera del Golfo lines are 28 euros. On Capri, one-way bus or funicular tickets are 1.30 euros, and a day pass is about 7 euros. Combination tickets for a round-trip hydrofoil ride with a multiple-course lunch at one of six restaurants on the island are available at the Naples USO for 39 euro.

FOOD: There are plenty of places to eat on the island. Most restaurants are open for lunch and dinner &mdash; and are expensive.

INFORMATION: The best thing to know about Capri is that it&rsquo;s pronounced differently in Italian. Americans accent the final syllable while Italians accent the first. So, Ca-PRI in English becomes CA-pri in Italian. The Web site www.capri.net has Italian and English sites with everything from history to hotels.