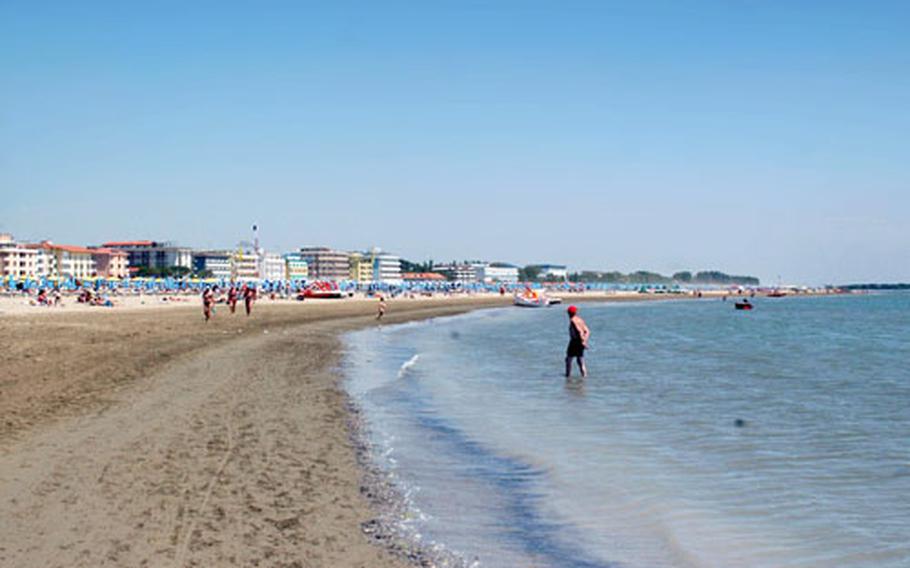 There’s plenty of sand to spare when the beaches aren’t crowded at Caorle. It’s generally packed on the weekends and holidays. (Kent Harris / S&S)

There’s plenty of sand to spare when the beaches aren’t crowded at Caorle. It’s generally packed on the weekends and holidays. (Kent Harris / S&S) 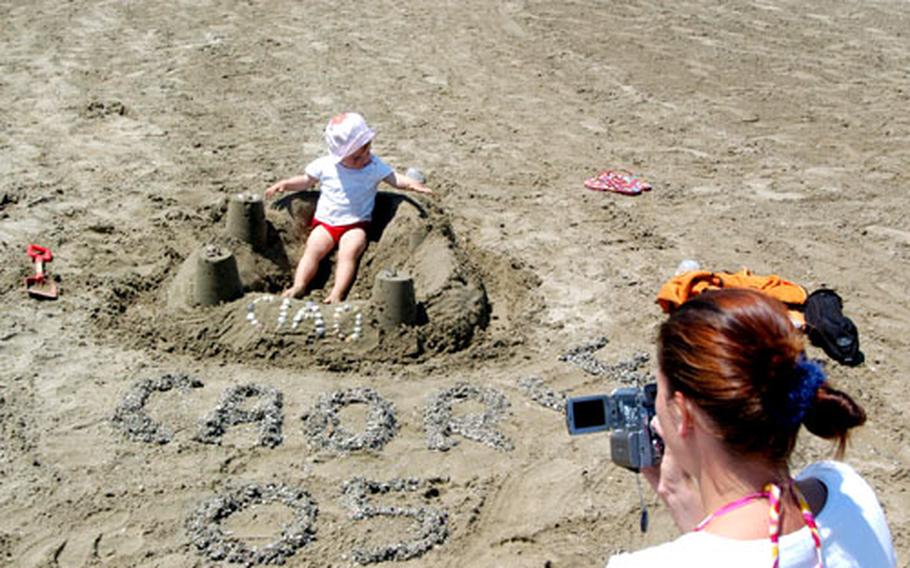 Sandra Stross films her 15-month-old daughter, Miriam, tearing down the sand castle that she and her husband, Wolfgang, made on the beach at Caorle, Italy. (Kent Harris / S&S) The bell tower of the 12th century Duomo Santo Stefano can be seen from just about everywhere in Caorle, Italy. It’s a good landmark for those wishing to visit the old part of town. (Kent Harris / S&S) This smiling face is one of dozens carved into rocks along the protective barrier that separates the two main beaches at Caorle. (Kent Harris / S&S)

When temperatures get warm in northern Italy, the locals head to the beach. Often by the thousands.

For those not afraid to brave the weekend crowds — or those lucky enough to take a day off during the week — the Adriatic Sea is a short drive from U.S. bases in northern Italy. A handful of beach resorts to the east of Venice heat up during summer months, attracting not only Italians, but also tourists from Austria and Germany.

Americans are welcome as well, says Gabriele Callagari, a lifeguard who spends six days a week working on his tan on the public beach at Caorle.

Especially if they fly F-16s. Callagari said he makes the trip up to Aviano Air Base — less than an hour most of the time — occasionally to watch the planes take off. Of course, the drive might take about twice that long on weekends because of the traffic.

“On the weekends, there are many, many people,” Callagari says, gesturing toward the great expanse of white sand dotted with hundreds of blue umbrellas.

But on this Friday, most of the umbrellas are furled. There is plenty of beach to go around. And there’s another large stretch of sand on the other side of the downtown area. Take your pick.

Be warned: Kids are everywhere, but clothing for both sexes on the upper body is optional, as is the case at many European beaches.

Admission is free. The costs come if you want to rent a beach chair and umbrella. If you don’t, however, you’re restricted from pitching your own setup anywhere near the water — though from elsewhere on the beach it is still an easy walk to get your feet wet. Most people in the rented seats seem to have deals worked out with the local hotels that line the edge of the beach, separating it from the rest of town.

And, yes, unlike some of the beach resorts in the area, there is an actual town.

Daniela Zamarian, who works at the local tourist office, says Caorle dates to at least 800 when records show an influx of people seeking safety from a series of barbarian invasions.

“Caorle is not only a tourist resort, but it has its own history and fishing industry,” she says.

There are plenty of restaurants and shops catering to tourists in the old town. English is common on menus and in shops, but those with some knowledge of German can fare even better.

One of the better places to get out of the sun for a while is the Duomo di Santo Stefano, a church that dates to the 12th century. It’s in the old town, about five minutes away, and its bell tower can clearly be seen from the beach.

But don’t walk straight toward it. Take a detour at the small church — Madonna Dell’ Angelo — that’s right next to the beach. Circle around the back and walk along the rocky breakwater on the way to the downtown. Every two years, Italians and foreigners come to town and engage in a sculpture contest, carving up the rocks.

Those interested in getting out on the water can rent kayaks on the beach or take a cruise on the Caorle lagoon.

Everyone else will be hanging out at the beach.

On the QT ...Directions: From Aviano, take A28 and exit at Portogruaro. Pass through the town and follow the signs to Venice or Caorle. It’s about 45 minutes with light traffic. From Vicenza, take the A4 through Venice and head toward Trieste. Exit at Santo Stino di Livenza or Portogruaro. The last 15 miles are on narrow roads, often lined with trees.

Times: Lifeguards are on the beach from 10 a.m. to 7 p.m. daily during the summer; hours change during off-season. The tourist office is open 8 a.m. to 10 p.m. daily.

Costs: Park in one of the lots on the outskirts of town. Those closest to the beach are a few blocks behind all the hotels that face the beach. Meters close to the beach love to eat your euros. Daily cruises on the lagoon, lasting about two hours, cost 14 euros for adults, 8 for children. Kayaks can be rented for 5 or 6 euros per hour, depending on the size.

Food: Each hotel facing the beach seems to have its own restaurant on the bottom floor. There are lots of eateries specializing in seafood and/or pizza in the old town. Gelato stands are there also.

Information: The tourist office is in town, a few blocks on cobblestone streets from the church bell tower that marks the downtown area; telephone (+39) 0421-81085; e-mail info@caorleturismo.it; Web site www.caorleturismo.it.