Cambridge, England, gets its own Jamaica Blue 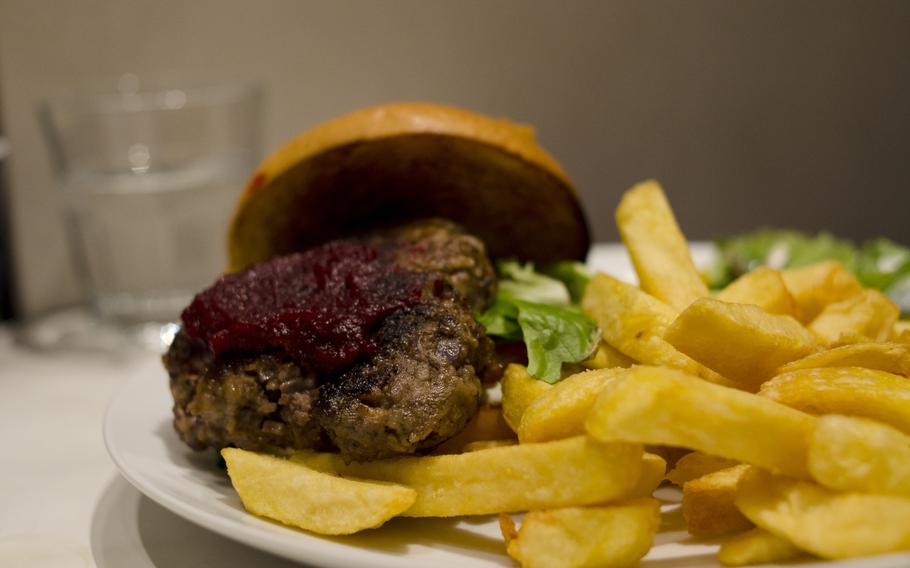 A hamburger with beetroot jelly is one of the more hearty sandwiches on Jamaica Blue's menu. The restaurant also offers dishes such as pasta and lasagna. (Adam L. Mathis/Stars and Stripes)

A hamburger with beetroot jelly is one of the more hearty sandwiches on Jamaica Blue's menu. The restaurant also offers dishes such as pasta and lasagna. (Adam L. Mathis/Stars and Stripes) 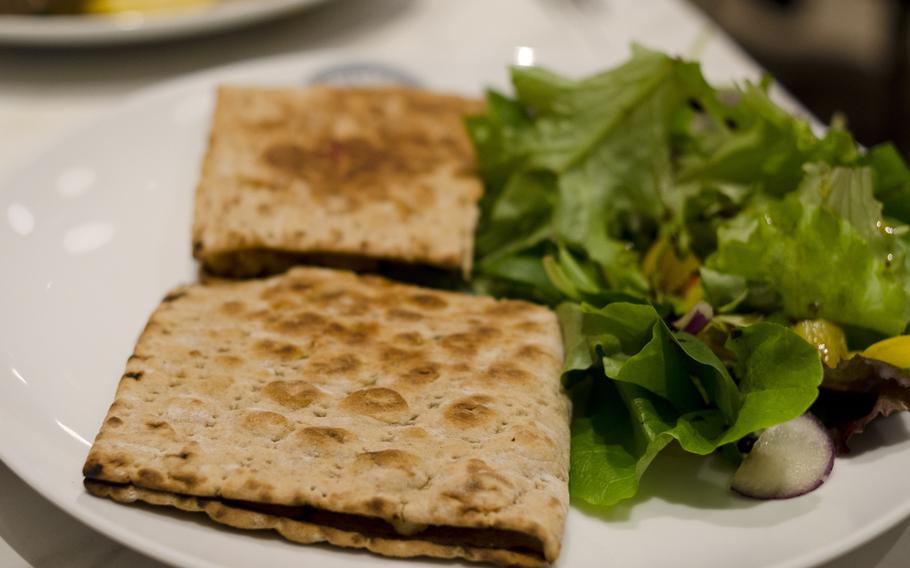 The chicken, almond and herb flatbread is one of several sandwiches offered by Jamaica Blue. The menu also includes an all-day breakfast. (Adam L. Mathis/Stars and Stripes) 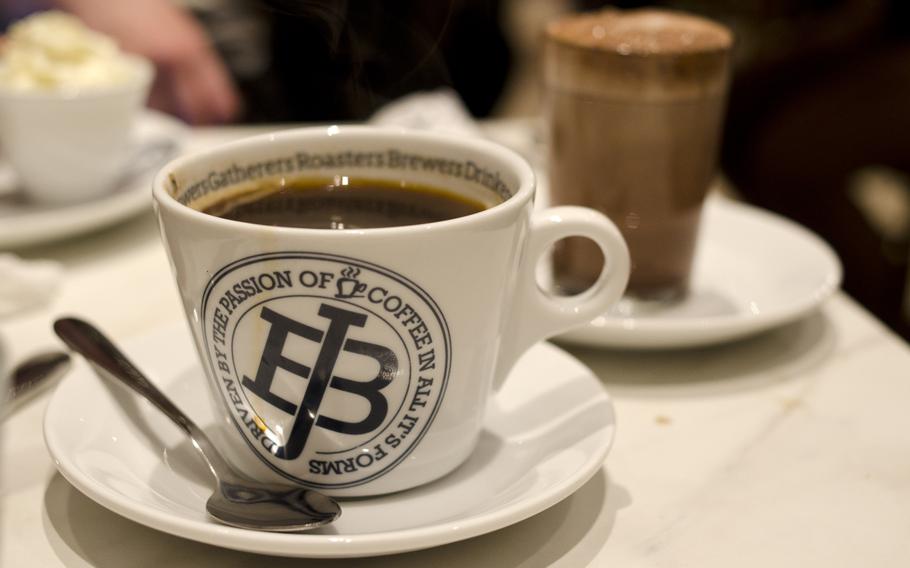 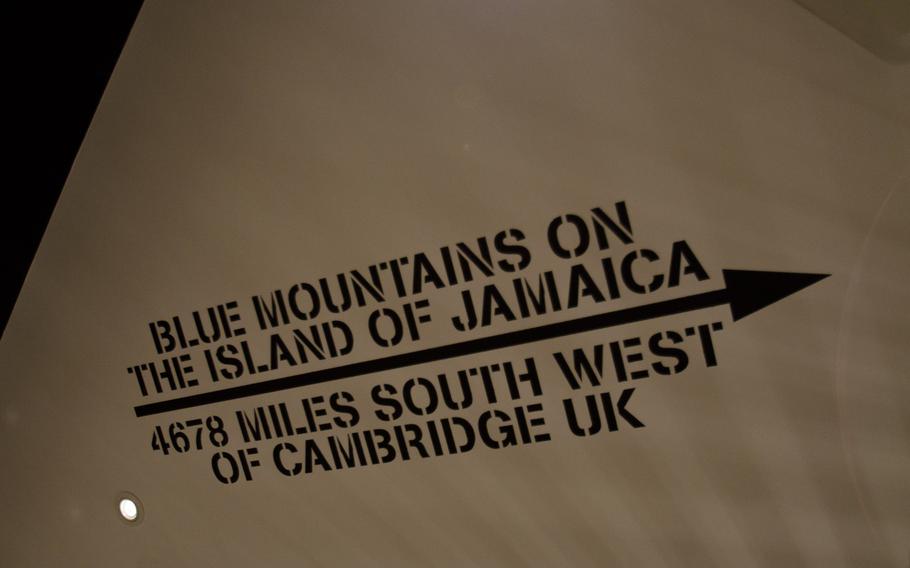 Jamaica Blue in Cambridge, England, pays homage to its coffee's origin with a note on the roof. The restaurant opened its doors in December. (Adam L. Mathis/Stars and Stripes) 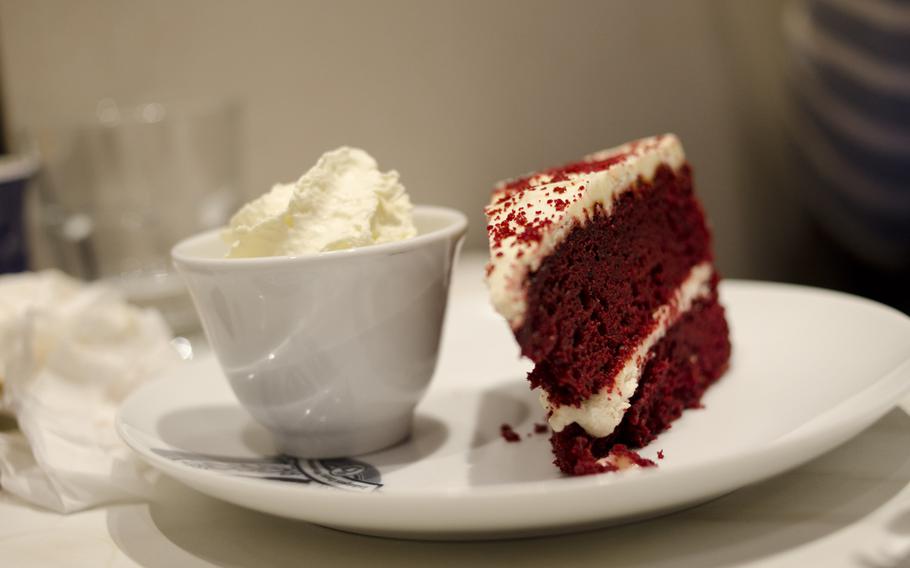 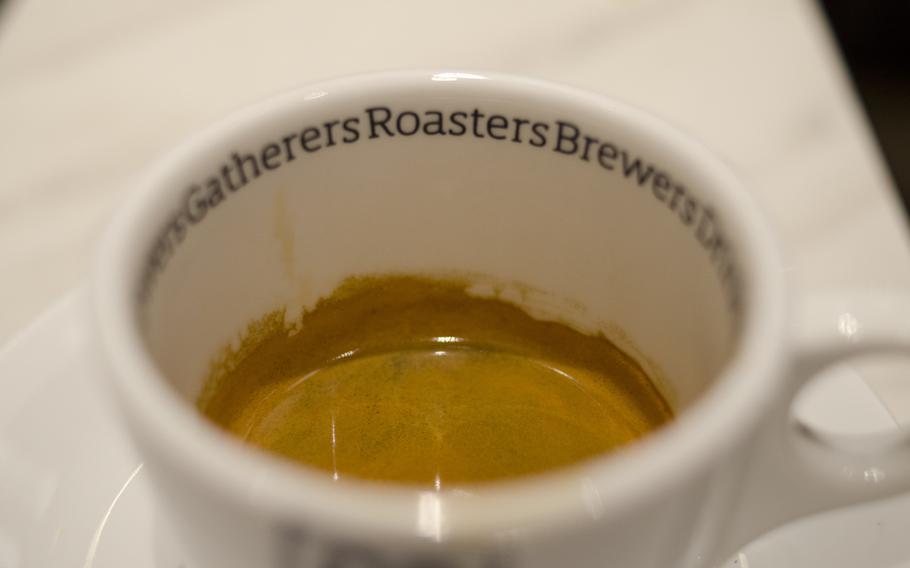 Despite the coffee’s worldwide fame, it’s difficult to find a cafe that serves it. Perhaps because Jamaica exports more than 80 percent of its Blue Mountain coffee to Japan or because most cafe owners feel that customers would not be willing to pay for coffee from beans that can cost more than $50 a pound. Jamaica Blue, a restaurant chain based in Australia, opened a location here last month partly on the bet that there were enough java lovers aching to try the Caribbean coffee.

Jamaican Blue Mountain coffee may be world-famous, but it is not impossible to botch. Blue Mountain beans are sought after because they can produce a cup of coffee devoid of bitterness, but the first time I ever tried the Blue Mountain in London, it tasted of cardboard and cost $15. Jamaica Blue’s baristas in Cambridge have restored some of my faith in this type of coffee. My first cup from the cafe was smooth, with a chocolate flavor that lingered on the palate. It was also about one-third of the price of what I tried in London.

Coffee isn’t the only thing that Jamaica Blue serves. It offers an extensive, cafe-style menu. A full page is dedicated to an all-day breakfast, and its lunch and dinner menu favors sandwiches.

A sandwich of chicken, almonds and herbs, which cost 5.9 British pounds (about $10), seems to be one of the healthier options. It’s a combination of chicken, the right amount of parsley and a welcome bit of crunch from the toasted flatbread.

Not everything on the menu succeeds like their coffee and chicken sandwich. The hamburger with beetroot jelly is an interesting idea, but the meat suffers from a lack of seasoning. The jelly cannot do all of the work, and my wife described the bland sandwich as “boring.” At least the fries were good.

The dessert somewhat redeemed the restaurant in my wife’s eyes. She ordered the classic red velvet cake, which hit all the right notes, and a hot chocolate, which was thick and rich. My white chocolate and pistachio pie was good. But the chocolate was particularly pungent, so do not order it if you are on the fence about white chocolate.

While the all-day breakfast has its appeal, Jamaica Blue’s greatest selling point in the Cambridge market is its coffee. The city has numerous coffee shops but few in the specialty and artisan end. Offering Jamaican Blue Mountain coffee may create an itch local shoppers may not even know they had to scratch.

Costs: Some breakfast dishes run as low as 2.90 pounds (about $4). The most expensive lunch/dinner entree is about $17.