Cambodia rises above its troubled past 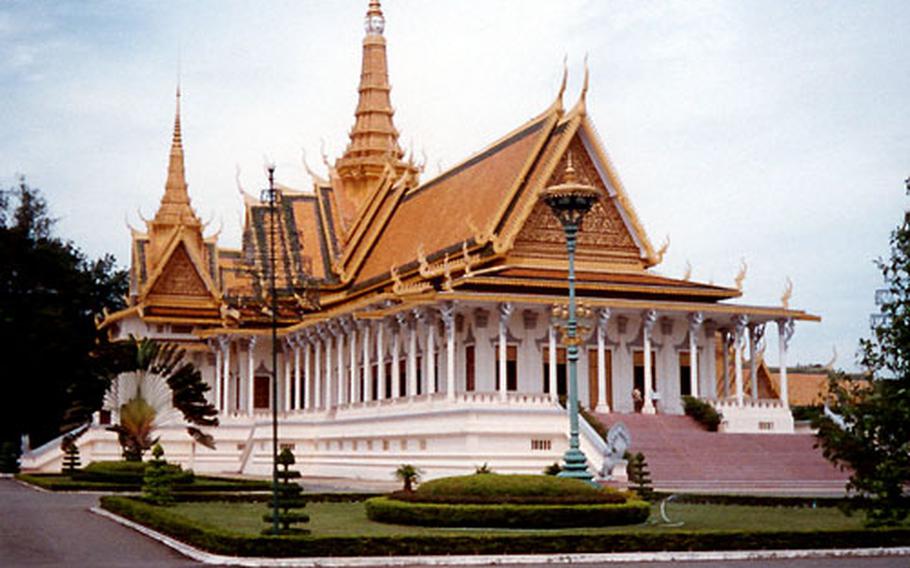 The Throne Hall of the Royal Palace in Phnom Penh is only used during coronation ceremonies, a rare event. (Jeremy Kirk / S&S)

The Throne Hall of the Royal Palace in Phnom Penh is only used during coronation ceremonies, a rare event. (Jeremy Kirk / S&S) 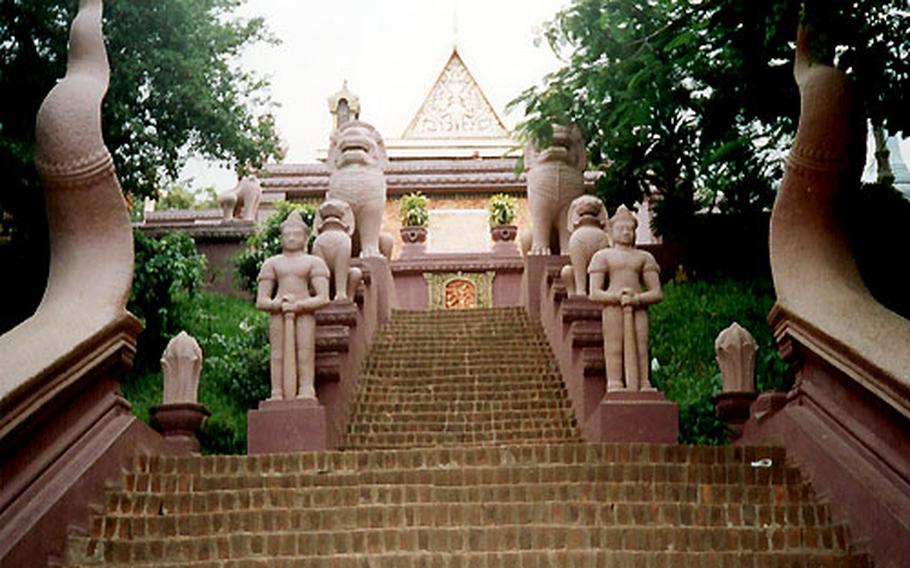 The stairway leading to Wat Phnom, a temple on the tallest hill in in Phnom Penh. (Jeremy Kirk / S&S) 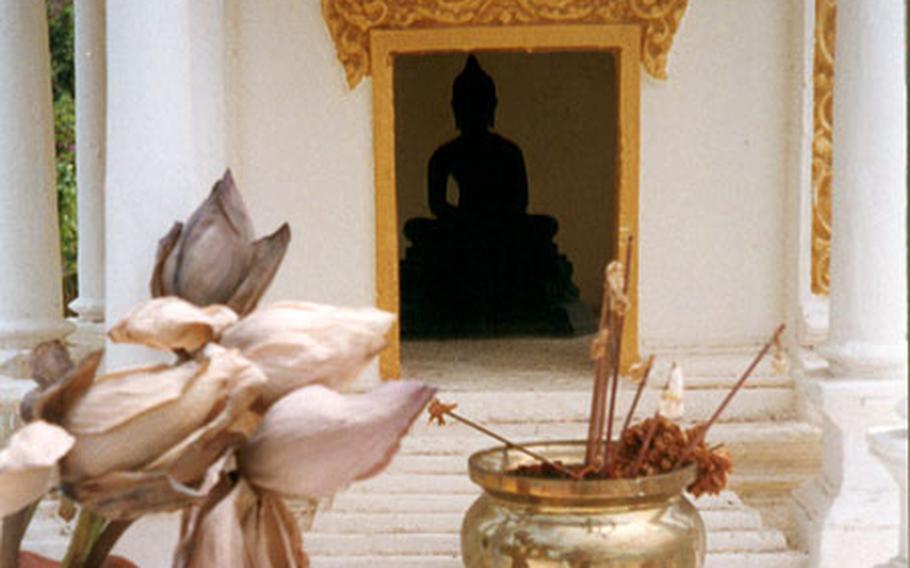 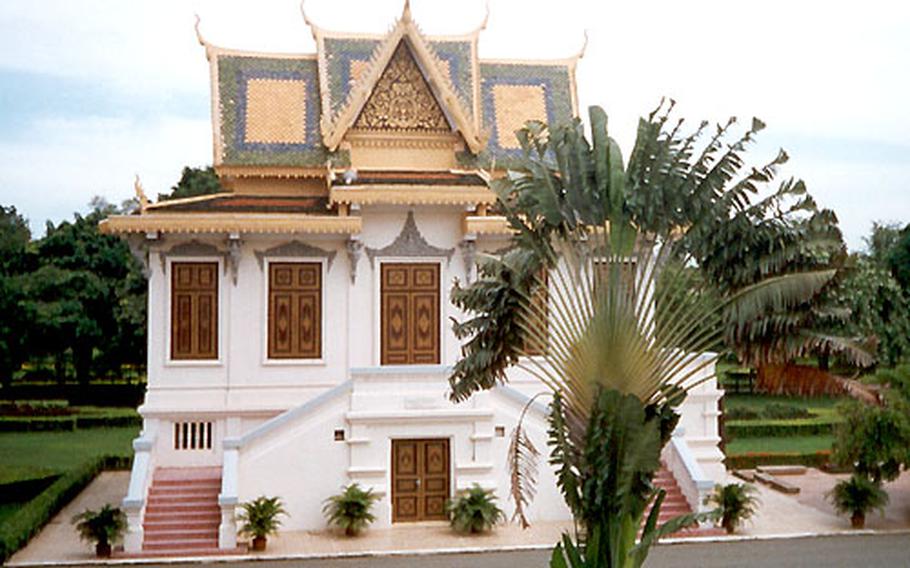 The grounds of the Royal Palace have Khmer architecture along with elements of its French influence. (Jeremy Kirk / S&S)

For a country rich with Buddhist and Hindu history and marvelous temples, Cambodia unfortunately retains a common, macabre image: rows of skulls from its ferocious 1970s revolution.

But the war stories and violence are now buried behind warm smiles. The Cambodia portrayed in the movie &ldquo;The Killing Fields&rdquo; has long since passed. Pol Pot &mdash; the notorious leader of the Khmer Rouge &mdash; is dead, and the group itself is scattered and disarmed.

While Cambodia&rsquo;s democracy is tenuous, the country has enjoyed four years of relative peace and stability. Tourists have trickled back for a few years now, albeit not in great numbers. But if peace continues, its reputation &mdash; bolstered by fabulous places such as the Angkor temples &mdash; likely will grow.

Phnom Penh &mdash; a city graced with French colonial architecture but plagued with a developing nation&rsquo;s woes &mdash; has few paved streets but a charming character &mdash; in part of because of its slow decay.

Its main streets are wide and royal, often landscaped with blooming tropical plants and Buddhist ornaments. But down side streets are shanties, shoeless children and clear evidence of the Cambodian people&rsquo;s struggle to survive.

But for many Cambodians, comfort is a chimera. Packed into a country roughly the size of Missouri, they endure one of the world&rsquo;s lowest living standards. Average per capita income is $275 per year.

Throughout the capital city of Phnom Penh, English signs advertise places such as &ldquo;Seeing Hands Massage,&rdquo; an organization providing jobs for the blind. Silk and craft shops set up by aid organizations help tap into the tourist market.

It&rsquo;s recovery, one person at a time.

The Great Wall of China is an unimaginative zipper of dull rocks when compared to the mystical temples of Angkor, the most popular of Cambodia's attractions.

Built over 600 years, the temples are spread over 77 square miles north of Siem Reap, a small town near Tonle Sap Lake. The decaying temples are spectacular evidence of Khmer architectural feats, hubs of religious and cultural finesse.

From Phnom Penh travelers have two options: a jarring, 10-hour car ride on some of the most hellish roads in the world or a boat. The boat is a smooth, $25 speedy cruise up the Tonle Sap River, a vital vein of life for Cambodians who use it for transportation and food.

It leads to the freshwater Tonle Sap Lake, where much of Cambodia's population is centered. The boat ride is a blast: you can sit on top of the boat with a brisk, muggy 45-mile-per-hour breeze through your hair under the hot jungle sun.

The boat ride is lively, with Khmer movies playing below in the air-conditioned cabin. Many tourists prefer lounging on deck.

Near Siem Reap, the boat slinks through a narrow causeway where people live on bobbing wooden boats. Children wave to throngs of tourists. The muddy shore is packed with guesthouse hawkers and moto drivers, a virtual refugee camp of entrepreneurs.

Siem Reap is a small town that has mostly geared itself for tourism.It's entirely a service economy boosted by its greatest jungle resource: the temples.

Angkor Wat - the most well-visited site - is the largest temple. It been restored and was featured in the 2000 movie "Tomb Raider." Surrounded by an enormous moat and short-trimmed grass, Angkor Wat's stone spirals jut heavenward.

It's an awesome feeling, bridging the moat to the main complex and walking on stones nearly 1,000 years old. Young Buddhists with smooth shaved heads and orange robes circulate through the temple's grounds.

Pictorial bas-reliefs line four sides of the temples, intricate stone carvings depicting Hindu and Buddhist epics. The bas-reliefs come from Angkor's heavy influence from the two religions, which were modified according to the prevailing rulers of the time.

Angkor Wat is perfectly modular. Shafts of light from overhead light the inside where aging Buddhists worship. It's respectful if you light incense and give a donation.

It's hard to feel closer to an Indiana Jones fantasy than touring throughout the Angkor temples. Dozens are scattered through the jungle, and many have only been made accessible in the last few years by removal of land mines and aggressive jungle growth.

Gnarled, fat banyan and fig trees grip the temple named Ta Prohm in a slow wrestling match. The huge stones resist, but the tree wins, dislodging them and augmenting its raw, undiscovered look.

Archeologists have debated what to do with the encroaching jungle and how to preserve the temples. The foliage has such as foothold between crevices and stone that it's impossible to remove roots without major damaged to temples.

Ta Prohm was built around 1186 as the royal temple center for ruler Jayavarman VII. At its height, his kingdom encompassed more than 3,000 villages, 80,000 temple workers and 600 dancers.

But the meshing jungle holds the ruins in a loving but eventually fatal grip. Although tourist numbers are rising, it's easy in places such as Ta Prohm to find a silent spot among the soft buzz of insects.

The temple's nooks and crannies are rough: some signs warn of falling rocks, and one must progress with ease on the damp, jumbled stones.

A thriving service industry has popped up outside each of the vtemples grounds, with dozens of children rushing to tourists with trinkets along with older women aggressively hawking food. The appeals underscore the country's dire financial situation.

Tuan, a 20-year-old Buddhist-in-training, recently lurked near theTerrace of the Elephants temple group, undergoing restoration compliments of Japanese donations. He stood near laterite stone that is used to replace broken sandstone. It was a Sunday, and Tuan said he had the day off from studying.

On his off days, he sells postcards and books to tourists while also walking them around the ruins for a tip. He said his four brothers died during Pol Pot's regime, and now it is just him and his 84-year-old father.

Outside Banteay Kdei, another temple, the poverty is highlighted again by a police officer lounging on a stone. He flicked his shiny police badge, saying "Do you want a souvenir?"

"All the police, they have to find some other job to get money,"said Pahn Phal Cahouk, a 30-year-old policeman outside Banteay Kdei. "If they had no tourists come here, it would be very difficult."

A one-day pass to Angkor is $20, although even a blitzkrieg tour can't cover all the territory, let alone enough time to afford a casual pace. The best way is to get a moto driver for the day who can take you on popular routes where you can see the most. A moto driver is about $7 a day and taxis - while fewer in number - cost more.

Siem Reap has dozens of hotels and guesthouses, varying in price from $2 up to $300 a night for extremely luxurious conditions. Clean, air-conditioned rooms with a television can run between $10-$15 a night and are more than adequate for most adventurers.

Back in the capital

In a couple days, it's easy to cover most of the sites in Phnom Penh, which has a mix of the beautiful and the horrid.

On the dark side, the Tuol Sleng Prison has a depressing museum showing how the Khmer Rouge systematically tortured thousands during their 1975-1978 rule. They sought to convert the country into an agrarian-based society, banning education and money.

Known as S-21, about 18,000 people were tortured and killed at the site, formerly a school but seized by Pol Pot's security forces in 1975. From the outside, Tuol Sleng barely looks like a dingy concentration camp; it still has a nice grassy lawn with palm trees.

But inside cells with peeling paint, metal torture devices are shown along with graphic photos of victims. Room after room is lined with mug-shot photographs of the imprisoned, many barely adolescents. The final room of Tuol Sleng has a glass display cabinet filled with human skulls.

Prisoners at Tuol Sleng ended up in the famed Killing Fields of Choeung Ek, where they were bludgeoned. The fields are open for touring, and human remains are still evident.

A much less gruesome tour are the grounds of Wat Phenom, a temple on the tallest hill in the capital city. Guarded by stone lions, the temple site looks over a huge park. Admission is $1.

The Royal Palace is an amazing collection of architecture and still today is the official residence of King Samdech Norodom Sihanouk. Sihanouk, who lived through events from the French occupation to the Vietnam War to Pol Pot, is highly respected along with his wife. Their pictures are displayed side by side throughout the country.

Even though much was looted during the Khmer Rouge, the Royal Palace's buildings contain extensive collections of Buddhist metalworking and figurines. The Silver Pagoda features 5,000, two-pound silver tiles along with a 180-pound solid gold Buddha in a display case.

The Throne Hall has two royal chairs that are only used when a new king is coronated. The hall has an enormous French-made rug spanning its length.

Cambodia's safety for foreign travelers has improved much over the last few years, but guns and robberies are not uncommon. As in any city, be careful about late-night travels.

Scooter travel is common. Moto drivers cost around $7 a day. Riding by scooter without a helmet is inherently dangerous, but your driver may have an extra one if you ask.

Many restaurants cater to foreigners, and meals can range from $2 to $7 for decent meal. Regular Cambodians can eat for much cheaper at food stands, and the food can be very tasty.

Hygiene standards are low. Don't panic if you get the inaugural intestinal illness. You can avoid the water, but most veggies and meats may be washed with it. Don't drink beverages with ice.

Take some medicine with you, as common over-the-counter Western medicine is unavailable. It will also be overpriced and could be expired.

The Royal Palace, an amazing collection of architecture, today still is King Samdech Norodom Sihanouk&rsquo;s official residence. This 80-year-old patriarch &mdash; who endured French occupation, the Vietnam War and Pol Pot &mdash; is highly respected, as is his wife. Their pictures are displayed side by side throughout the country.

Even though much was looted during the Khmer Rouge reign, the Royal Palace&rsquo;s buildings contain an extensive collection of Buddhist metalworking and figurines. In the Silver Pagoda, a building with 5,000, two-pound silver tiles, a 180-pound solid gold Buddha is in a display case.

The Throne Hall has two royal chairs used only when a new king is crowned. As in all of the Royal Palace&rsquo;s buildings, you must remove your shoes before entering.

A must-see is the Russian market, where prices on clothing and trinkets are very low by developed country standards. T-shirts, Khmer-style dress and wood carvings are sold, but be skeptical of anything labeled an antique.