Calabria: In Italy’s ‘toe,’ eyes grow weary from looking at the seamy side 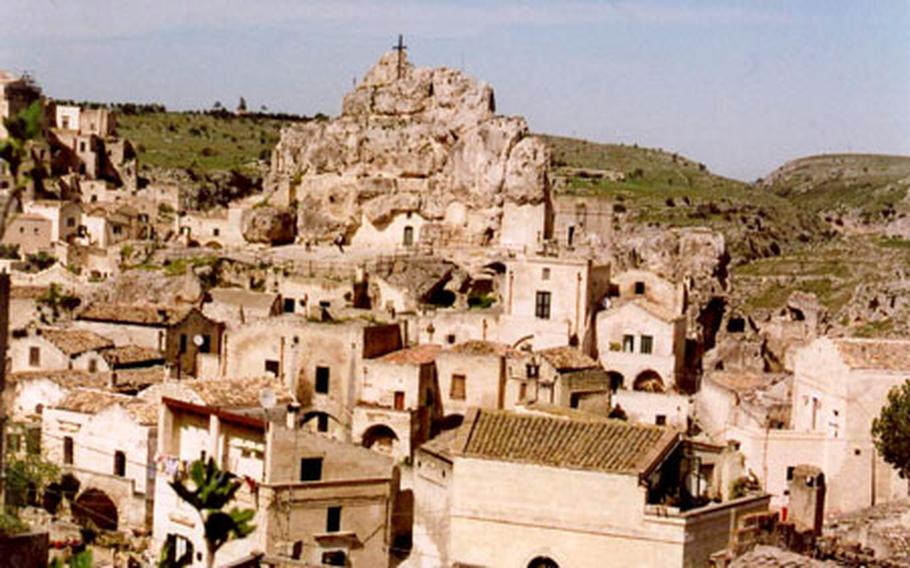 Matera, a town in Basilicata, is known for its “Sassi,” tiers of dwellings, many carved into its rock ravine. Until 40 years ago, as many as 15,000 of the city’s poor lived in this troglodyte village. (Leah Larkin / Special to S&S)

Matera, a town in Basilicata, is known for its “Sassi,” tiers of dwellings, many carved into its rock ravine. Until 40 years ago, as many as 15,000 of the city’s poor lived in this troglodyte village. (Leah Larkin / Special to S&S) 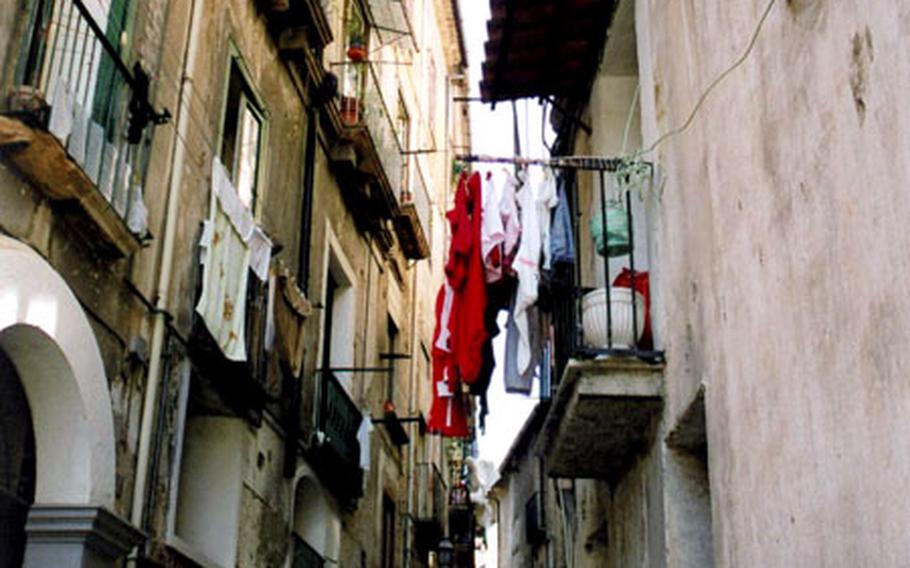 The old town of Cosenza in Calabria is downtrodden, with crumbling buildings and dark alleyways. (Leah Larkin / Special to S&S) 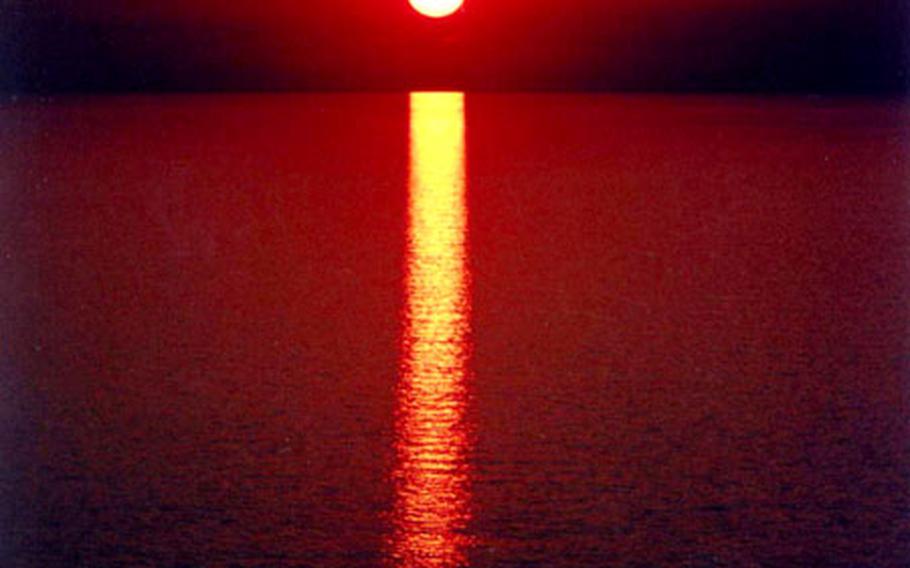 A rare moment of joy on a trip to Italy’s toe region, a gorgeous sunset along the Calabrian coast. (Leah Larkin / Special to S&S)

Our visit to Apulia, Italy&rsquo;s heel, wasn&rsquo;t that exciting. Maybe Calabria, the toe, would be, even though it&rsquo;s one of Italy&rsquo;s poorest regions.

Calabrian landscape varies from a harsh, mountainous interior to seaside beaches on both sides of this narrow stretch of land between the Ionian and Tyrrhenian Seas. As part of Magna Graecia, Calabria was prosperous with flourishing cities, but frequent earthquakes through the years have destroyed most of its past treasures.

Before entering Calabria, we drove northwest and inland from the coast of Apulia through a small part of the province of Basilicata. Matera, one of its main towns, was our goal. It was a long drive through towns congested with too many cars and trucks.

Matera sits on the edge of a ravine of rock and is known for its Sassi, strange habitats, most cave-like and carved out of the stone in tiers forming an intriguing troglodyte village. Until some 40 years ago, as many as 15,000 of the city&rsquo;s poor lived in the Sassi. Under the protection of UNESCO, some Sassi are now being restored, but most are abandoned.

We walked up and down the steps of the steep cliff clustered with these bizarre, dilapidated dwellings, stopping in one where a film, offered in numerous languages, gives a history of the area. It&rsquo;s all very curious, if not a bit surreal.

Leaving Matera, we proceeded to the Calabrian coast and another agriturismo, the Masseria Torre de Albidona, near the town of Trebisacce. It is more like a small hotel hidden in the hills overlooking the coast, and is very difficult to find. Although our dinner was mediocre, we had a good bottle of wine to accompany it. And, its swimming pool, location and views are special.

We weren&rsquo;t eager to drive the tortuous mountain roads of Calabria&rsquo;s interior. Fortunately an autostrada leads inland, offering views of snow-capped peaks as it slices down the east side of the province past a major town, Cosenza, where we stopped.

As usual, we looked for the old town. It was depressing &mdash; run down and filthy with overflowing garbage cans. I was about to take a picture of an alley with laundry stretched across the crumbling buildings when a man washing his car stopped me. He wanted to know where I was from, then invited me inside his apartment building to take a picture to show the people in America &ldquo;a beautiful&rdquo; Italian house.

I immediately realized he was being sarcastic. He wanted me to photograph the decrepit staircase. He ranted on and on in Italian. I did not understand everything, but enough to know that he was complaining about the corrupt city government that he said takes care of its own but provides no funds for restoring old buildings.

It was Sunday and Cosenza&rsquo;s cathedral was not only open, but a Mass was about to start. We stayed for the service, then found a trattoria for lunch.

From Cosenza, the autostrada leads to the eastern coast. But we wanted to drive along the coast on the other side, the west, to the very tip of the toe and then to Reggio Calabria, the province&rsquo;s chief city. This meant we had to cross Calabria, but at least in this area the mountains aren&rsquo;t so steep and the roads more forgiving.

Our destination in the interior, the agriturismo I Basiliani, is an enormous old house surrounded by gardens and trees and decorated with precious antiques. Four friendly dogs greeted us. Before dinner, we took the dogs for a walk through the fields and woods. Four boys playing in a creek insisted on showing us the way back to our &ldquo;home.&rdquo;

Again we were the only guests, but our hostess, Marina Maretelli, a friendly, motherly type, treated us to a good dinner and the best breakfast yet. Until now, breakfast was usually bread, butter, jam and coffee. Here we had a feast: eggs, yogurt, cereal, homemade fruit juices, cheese and a special Calabrese cornetto, a type of cream-filled croissant.

We left the hills and picked up the coastal road. It was a laborious drive through congested cities. And it was disappointing. No slopes of grapevines in the countryside and no wine shops in the towns. The Ionian Sea, sparkling in the distance, was pretty, but not worth a special trip.

As we approached Reggio Calabria we could see Sicily&rsquo;s Mount Etna on the horizon with snow still clinging to its peak. According to our guidebook, the only real attraction in Reggio is its museum, the Museo Nazionale della Magna Grecia, with a set of famous statues: the Riace Bronzes, &ldquo;among the very few surviving examples of Classic Greek bronze statuary.&rdquo;

Our guidebook said the museum should be open. The doors were open and people were milling around, but an official insisted it was closed. I protested in my rudimentary Italian and pointed to the book, to no avail.

We quickly left Reggio and headed north on the east coast, stopping in Sylla, a pretty village on the shore, for a midday meal. We wanted to spend the night in Tropea, at first glance a lovely fishing village with nice beaches, but we could not find an open hotel.

So we drove along the coast until we found one that was. We had a room with a balcony overlooking the sea &mdash; perfect for watching a glorious sunset. But, again, it was lonely as we were the only guests. The friendly proprietor fixed us dinner with products from his garden. The only good thing about it was the price &mdash; 14 euros for four courses.

We decided we had seen enough of Calabria. On the way home we drove via the Amalfi Coast, a part of southern Italy we had visited before and loved. We reserved a room in Positano, a town hugging a cliff, and chilled out there for two nights, enjoying delicious seafood, spectacular scenery and a swim in the sea.

Calabria and Apulia are far from central Europe, so perhaps we made a mistake in trying to see it all, or most of it, in a short trip. If we had traveled later in the season, more places would have been open. And we definitely should have done more research on its wine.

But we still had to drive through Tuscany on our way back to our home in southern France. Why not stop there and buy wine? I got out the guidebook, found an agriturismo in the Chianti region, and off we went. There&rsquo;s no shortage of places to taste and buy wine in Tuscany.

My husband was in his glory.