Bus tour lets riders get a good view of Frankfurt 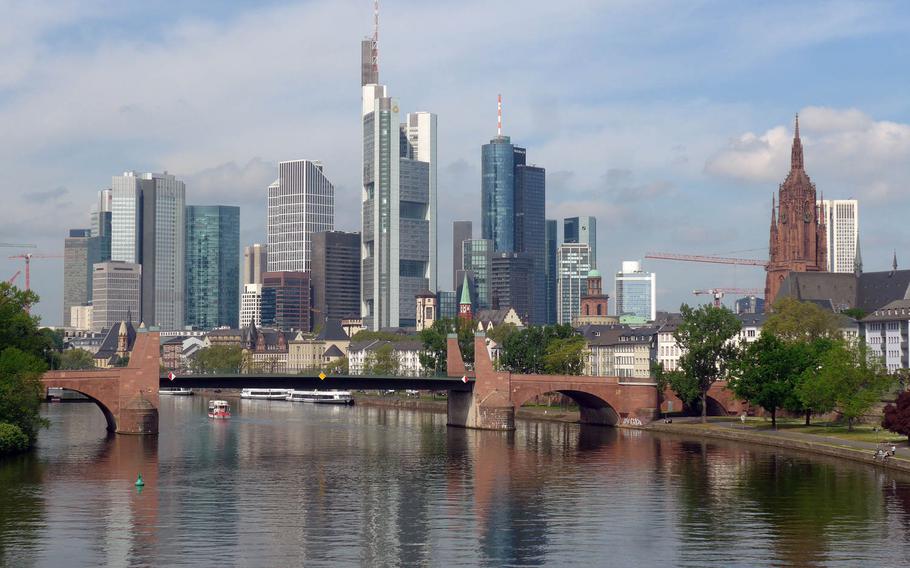 A view of the Frankfurt skyline from one of the bridges spanning the Main River. At center is the Commerzbank Tower. At about 850 feet, it is the second tallest building in Europe after The Shard in London. At right is the Dom, Frankfurt's cathedral. (Michael Abrams/Stars and Stripes)

A view of the Frankfurt skyline from one of the bridges spanning the Main River. At center is the Commerzbank Tower. At about 850 feet, it is the second tallest building in Europe after The Shard in London. At right is the Dom, Frankfurt's cathedral. (Michael Abrams/Stars and Stripes) 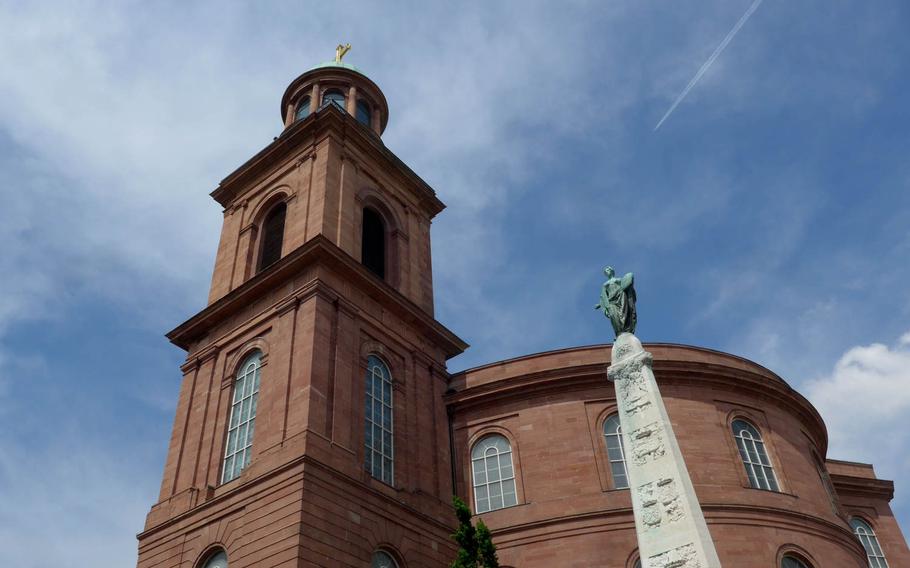 The Paulskirche on Paulsplatz in Frankfurt, Germany. Many of the bus sightseeing tours leave from near here. Once a Lutheran church, it was the site of the first German National Assembly. Destroyed in World War II, it was one of the first buildings in Frankfurt to be rebuilt. Today it is used for events and is where the Peace Prize of the German Book Trade is awarded annually during the Frankfurt Book Fair. (Michael Abrams/Stars and Stripes) 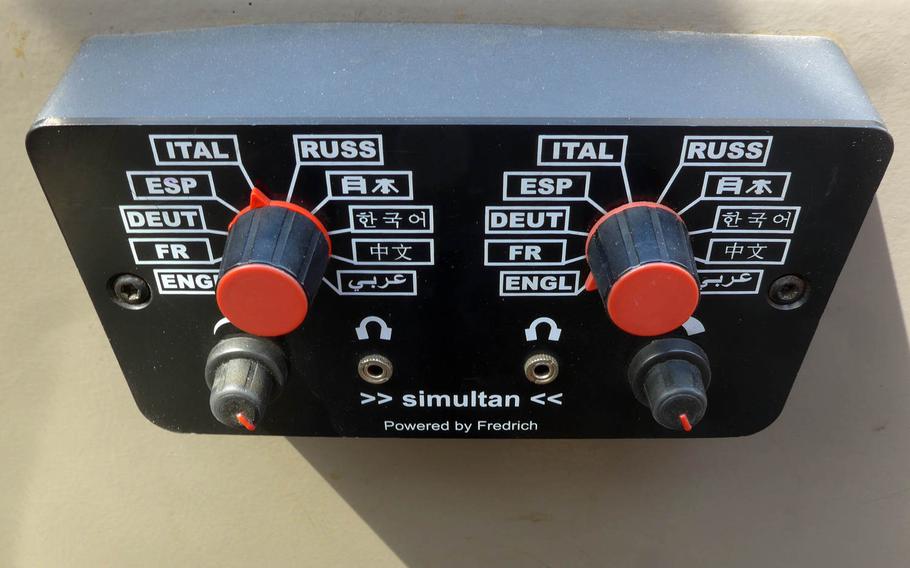 Bus tours of Frankfurt are offered in 10 languages. Just plug in the free earbuds and select your language. (Michael Abrams/Stars and Stripes) Driving through a valley of Frankfurt skyscrapers on a bus tour of the city. The reddish building is the Japan Center, the cylindrical building at right is the Main Tower. It was the first skyscraper in Europe with a facade made completely of glass. It has a popular viewing platform at the top with a fantastic view of the city and its surroundings. Michael Abrams/Stars and Stripes (Michael Abrams/Stars and Stripes) 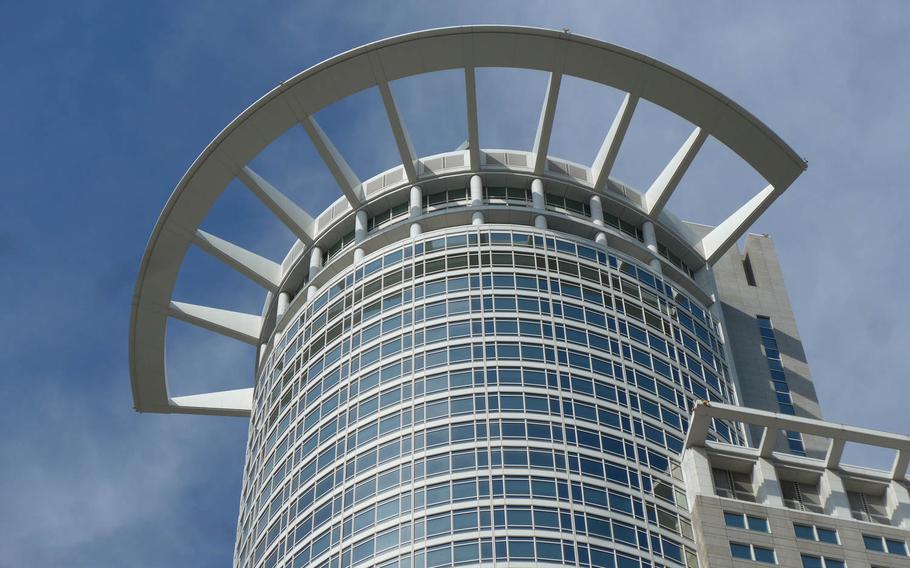 The Westend Tower with its crown-like profusion at the top. The crown is a nod to Frankfurt's history as the city where German emperors were crowned. It points in the direction of the cathedral where the coronations took place. The crown is heated in winter to prevent ice from forming. (Michael Abrams/Stars and Stripes) A view from a tour bus of the Frankfurter Dom, the city's cathedral. Officially the Kaiserdom St. Bartholomaeus, emperors of the Holy Roman Empire were crowned here from 1562 to 1792. (Michael Abrams/Stars and Stripes) 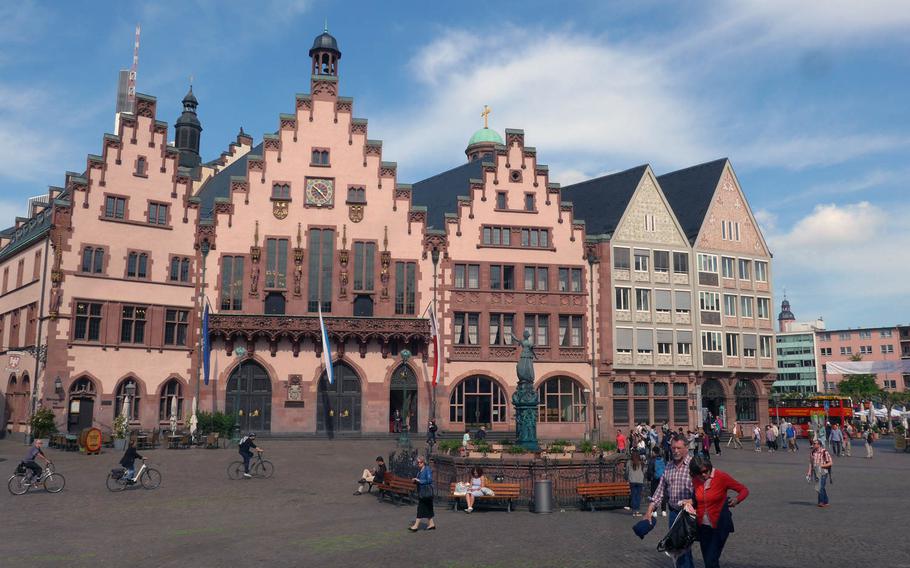 You only get a glimpse of the Roemer, Frankfurt, Germany's town hall, from the tour bus, but a stop on the route is nearby. One of the buses can be seen in the background at right. (Michael Abrams/Stars and Stripes) 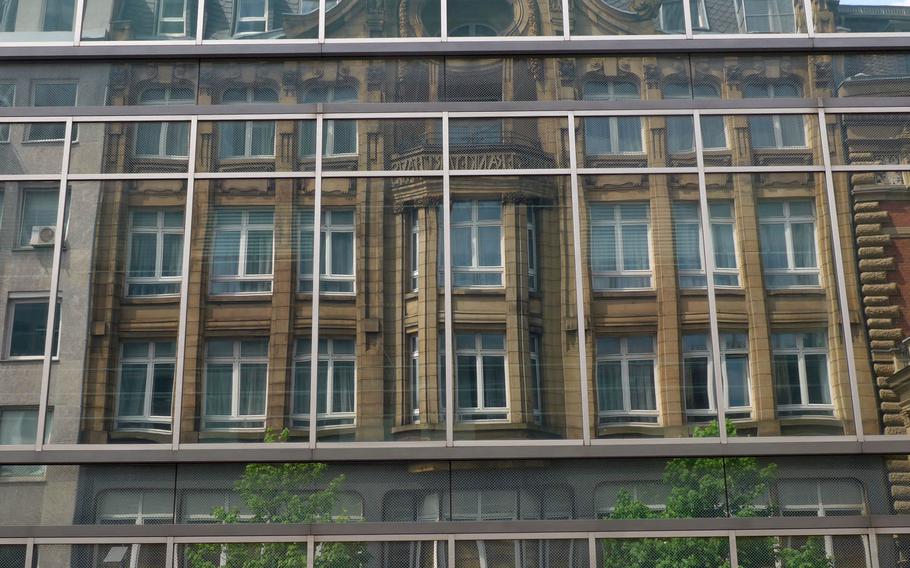 The facade of an old Frankfurt building is reflected in the glass facade of a modern building, as seen from a sightseeing tour bus through the city. (Michael Abrams/Stars and Stripes) The sun reflects off of one of the Deutsche Bank building's twin towers. They are referred to locally as Debit and Credit. (Michael Abrams/Stars and Stripes) 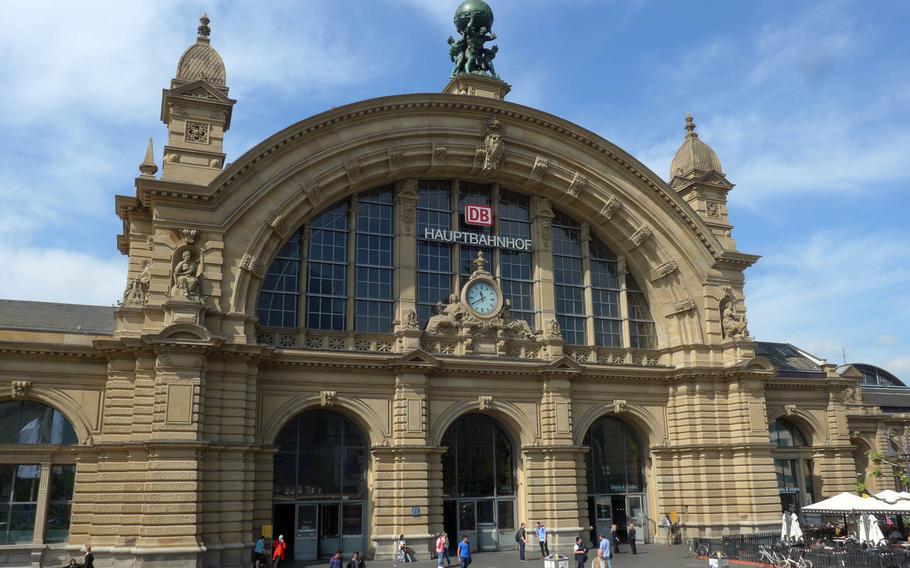 The Frankfurt Hauptbahnhof, or main train station. Opened in 1888, it was once the largest train station in Europe. With its 24 platforms it is still one of the biggest and busiest on the continent. There is a tourist information office inside, and most of the city sightseeing busses stop here. (Michael Abrams/Stars and Stripes) 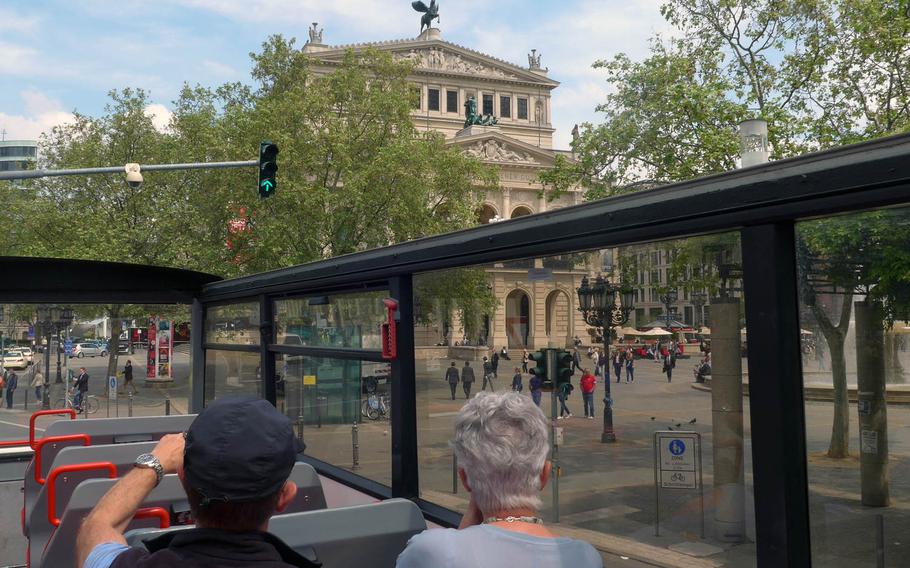 From the top deck of the tour bus, tourists take a look at the Alte Oper, Frankfurt's old opera house. The concert hall opened in 1880, but was nearly completely destroyed in World War II. It stood in ruins for years, a reminder of the war, but was finally rebuilt and reopened in 1981. (Michael Abrams/Stars and Stripes) 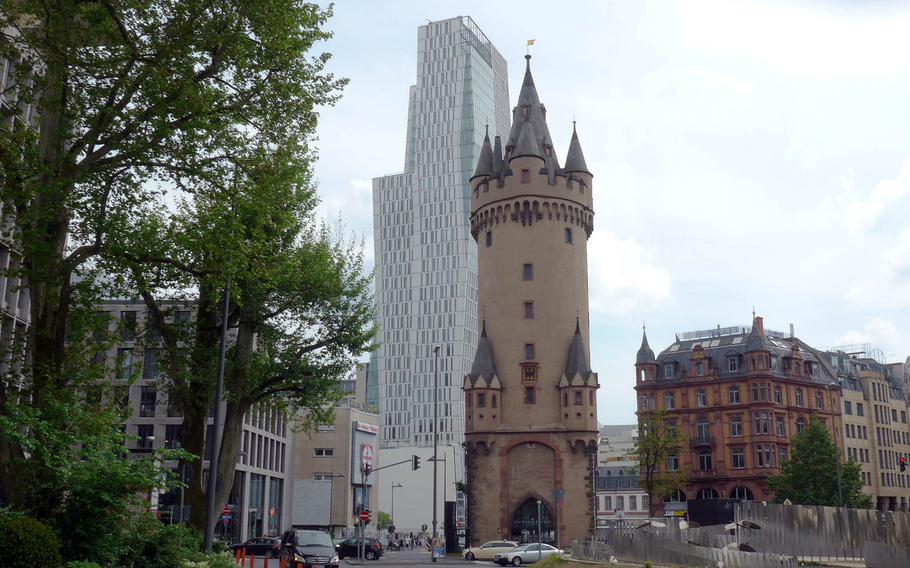 The Eschenheimer Tor was once part of Frankfurt's medieval fortifications that surrounded the city. A major trading road once ran through its gates. Behind it is the modern 443 foot-tall Nextower. (Michael Abrams/Stars and Stripes) 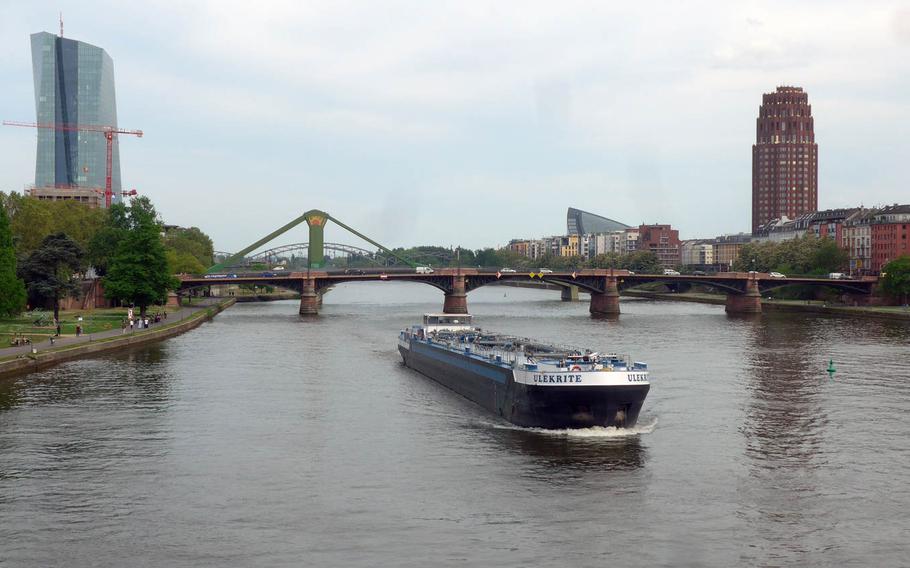 A freighter plies the Main River with two of Frankfurt's distinctive high-rises on each bankof the river. At left is the new European Central Bank Headquarters that opened last year, and at right the Main Plaza, built in the architectural style of early 20th-century New York high-rise buildings. (Michael Abrams/Stars and Stripes) 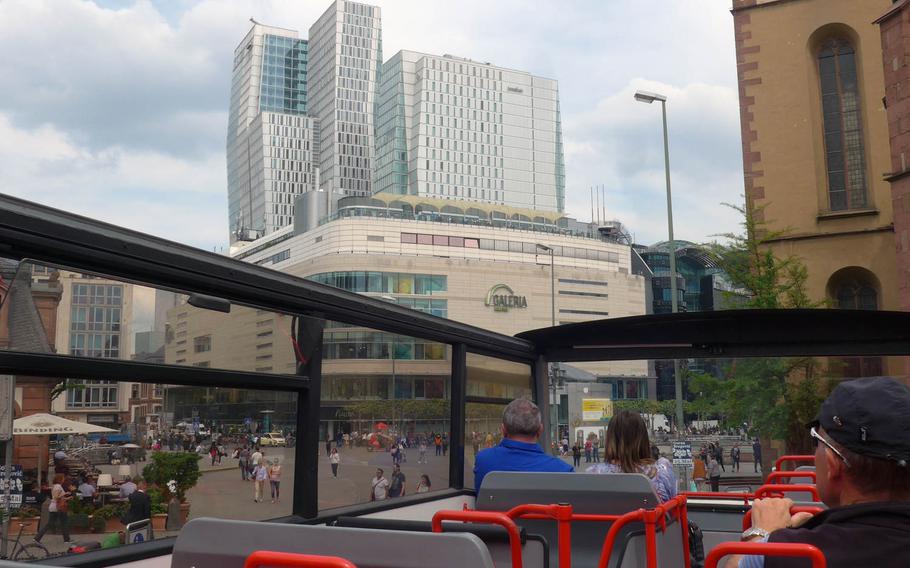 A view of part of the Hauptwache square in Frankfurt, with the Galeria Kaufhof department store with its rooftop restaurant in the foreground and the modern Nextower, left, and the adjoining Jumeirah hotel, right, behind it. (Michael Abrams/Stars and Stripes) 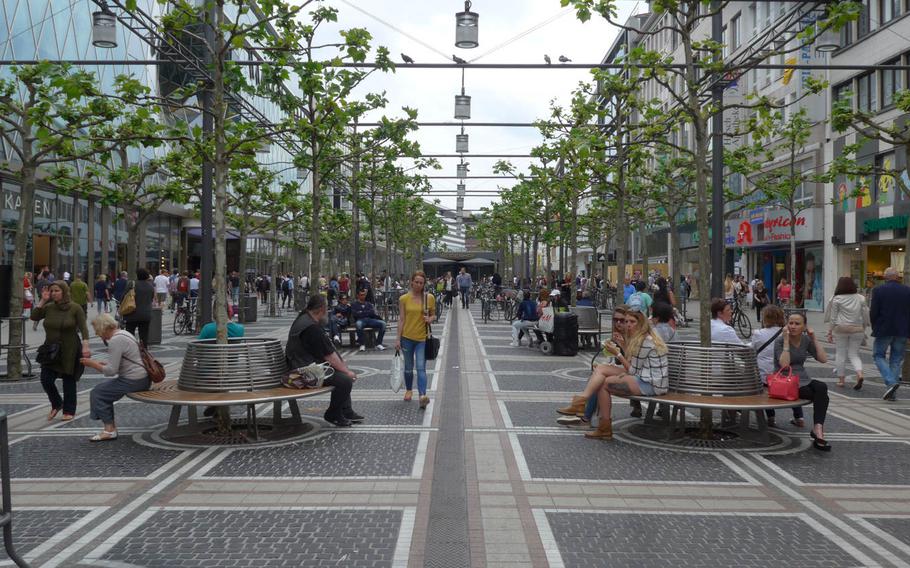 Another place you don't see on bus tours of Frankfurt is the Zeil, one of Germany's longest, and busiest, pedestrian shopping streets. (Michael Abrams/Stars and Stripes)

I know my way around Frankfurt pretty well. I went to Frankfurt American High School, I’ve had friends who work or live in the city, and I’ve spent weekends visiting its museums, shops and markets.

Still, I thought it would be fun to take a bus tour of Germany’s financial capital and fifth-largest city to see what I had missed over the years.

There are a couple of companies offering tours, so I chose one that had excursions on double-decker buses with open top decks.

It offered a hop-on, hop-off daily pass that included both a City Tour of the city’s main sights and the Skyline Tour, featuring Frankfurt’s high-rise architecture. Both included audio guides in 10 languages.

First up was the Skyline Tour.

For years, Frankfurt was the only city in Europe with high-rise buildings defining its downtown. Recently, London has almost caught up with Frankfurt, and with The Shard, the English capital now has Europe’s tallest skyscraper.

But Frankfurt’s skyline gave the city on the Main River one of its nicknames, “Mainhattan,” with a nod to the crowded skyline of New York City.

The tour led through the high-rise canyons of businesses and banks. The city is one of the financial capitals of Europe, and the number of banks gave Frankfurt another of its nicknames — “Bankfurt.”

The tour passed interesting architecture, including the Japan Center and the Main Tower, the first skyscraper in Europe to have a facade made completely of glass. The tour also provided interesting facts, such as that the soil here is mostly sand, requiring the buildings to have very deep foundations.

We passed through one of Frankfurt’s newest districts, the Europaviertel, with its high-tech high-rise office and apartment buildings, and near the Westend Tower, with its crown-like profusion at the top. The crown is heated in winter to prevent ice from forming, and with its warmth is popular with the city’s birds.

The tour led along the Main and made a stop in the middle of a bridge to offer an imposing view of the skyline and two of the city’s distinct high-rises, the new European Central Bank and the Main Plaza, built in the architectural style of early 20th-century New York high-rises.

Traveling along the outline of the city’s former medieval fortifications, the tour offered a view of old and new with the Eschenheimer Tor, an ancient city gate tower, juxtaposed with the modern 443-foot-tall Nextower

The City Tour offered a little more about the history of the city. It passed by the Alte Oper, which opened in 1880, was nearly completely destroyed in World War II and was rebuilt in 1981, and the Senckenberg Museum of natural history.

The tour drove along the south bank of the Main, the Museumsufer, with its long row of popular museums, then continued farther into Sachsenhausen, the district popular for its apple wine taverns.

Both tours start and finish at Paulsplatz, site of the Pauls-kirche, where the first German National Assembly met.

There are many stops on both tours where riders can get off and explore, including one near the zoo, and at the Hauptbahnhof.

Not all sites are visible from the bus, including the Roemer, Frankfurt’s city hall, and the Zeil, one of Germany’s longest — and busiest — pedestrian shopping streets. Neither tour passed close to the I.G. Farben building — later known as the Abrams Building — once the U.S. Army’s V Corps headquarters, or Frankfurt American High School, nearby.

Although the bus tours are interesting and worth the time, some things must be discovered on foot.

Frankfurt is about 25 miles from Wiesbaden and 60 miles from Kaiserslautern. The best places to catch the bus are at Paulsplatz in the city center or at the Hauptbahnhof, the main train station.

Prices vary by vendor and tour. We bought a day ticket on CitySightseeing that included its regular City Tour and the Skyline Tour for 20 euros (about $23) for adults and 9 euros for children. Prices are cheaper if you order on the web.

None served on the tours, but there are plenty of places to eat in all price classes in downtown Frankfurt.

Go to www.citysightseeing-frankfurt.com for the tour we took. Check http://tinyurl.com/j3pudpg for various tours of the city. Go to frankfurt.de and click on the British flag for the English-language version of the city’s website.