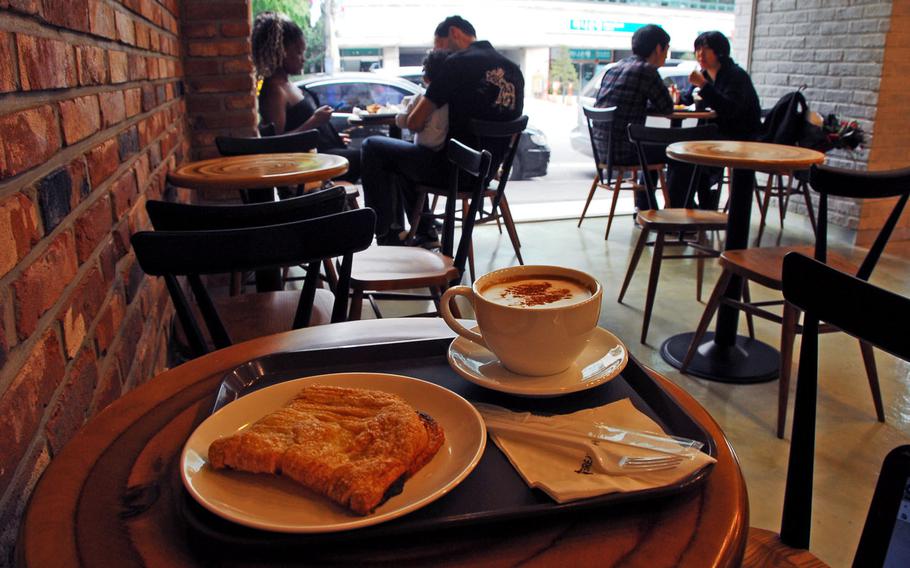 Customers sip coffee and eat freshly made breads and pastries at Bread Show, a French-style bakery and cafe in Itaewon. In the foreground are a cappuccino and a pastry with a lemon-flavored filling. (Photos by Ashley Rowland/Stars and Stripes)

Customers sip coffee and eat freshly made breads and pastries at Bread Show, a French-style bakery and cafe in Itaewon. In the foreground are a cappuccino and a pastry with a lemon-flavored filling. (Photos by Ashley Rowland/Stars and Stripes) 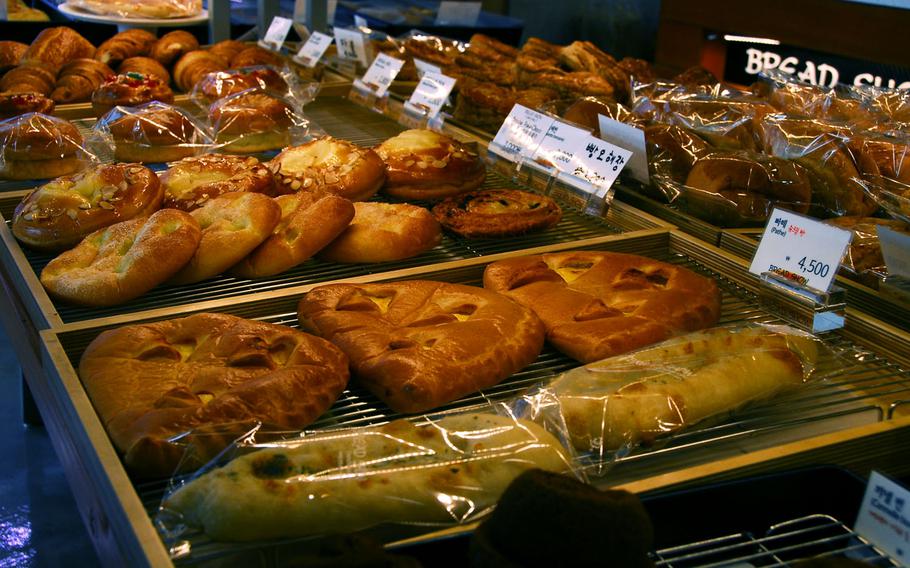 A selection of pastries on sale at Bread Show in the Seoul neighborhood of Itaewon, which makes breads and pastries on site. (Photos by Ashley Rowland/Stars and Stripes) 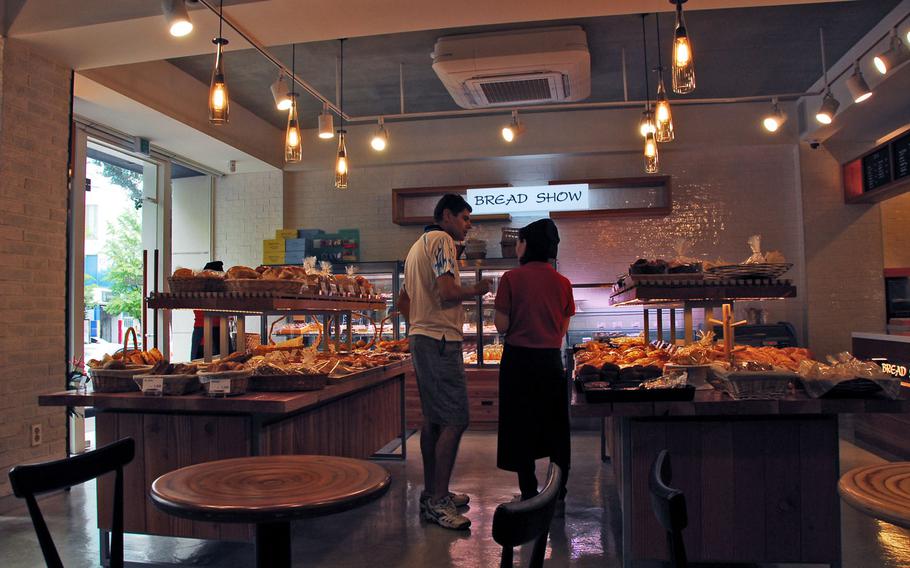 Bread Show is located a 10-minute walk from U.S. Army Garrison Yongsan and run by a French chef. (Photos by Ashley Rowland/Stars and Stripes)

Autumn has arrived in Seoul, and as the temperatures drop, Itaewon turns inward, with its trendy restaurants — many of which turn into open-air cafes in the warmer months — moving their tables back inside for the long winter.

For a cozy place to get a cup of coffee and a quick bite to eat, try Bread Show, a popular bakery and cafe that bills itself as “the one and only French style bakery” in Itaewon.

Located a 10-minute walk from U.S. Army Garrison Yongsan and run by a French chef, Bread Show certainly beats its “French” competition down the street — the ubiquitous South Korean chain Paris Baguette — in freshness and quality. You can even peer through a window into the kitchen and watch the chef at work.

The offerings at Bread Show range from savory to sweet. There are egg tarts and walnut tarts, slices of chocolate marble cake, ciabatta rolls, a variety of loaf breads and baguettes.

On a recent morning, I ordered a cinnamon-dusted cappuccino and a flat, fan-shaped pastry with a mildly tart lemon curd filling, crispy on top and sweetly gooey on the bottom, folded inside a flaky, croissant-like dough.

I took home a plain baguette and two pastries — a simple but delicious glazed pinwheel studded with raisins, and a pain chocolat, a traditional, buttery French croissant with a small stick of chocolate tucked inside — intending to eat them for dessert that night. But both had disappeared by lunchtime, along with half of the baguette, which was addictively crusty on the outside and soft yet chewy inside.

If you’re looking for a light meal instead of something guaranteed to give you a sugar or carb rush, Bread Show also offers sandwiches, most priced at 5,000 won (about $5), and pizza breads sized for a single serving.

You can eat inside the small, sun-filled cafe to the sound of soft K-pop or Western pop or have your breads sliced to go. Bread Show has strong Wi-Fi signal for those looking for a place to surf the Internet.

Bread Show also offers drinks, including teas, fruit ades and juices. There’s also a standard selection of coffee drinks, from Americanos to espressos and lattes. Most drinks are priced from 3,700-6,000 won.

Bread ShowLocation: Itaewon, near a three-way intersection and across the street, catty-corner, from the IP Boutique Hotel.

Directions: Take exit three at Itaewon station and walk straight for about five minutes. Bread Show will be on your right, shortly before you reach the Cheil Building and a three-way intersection.