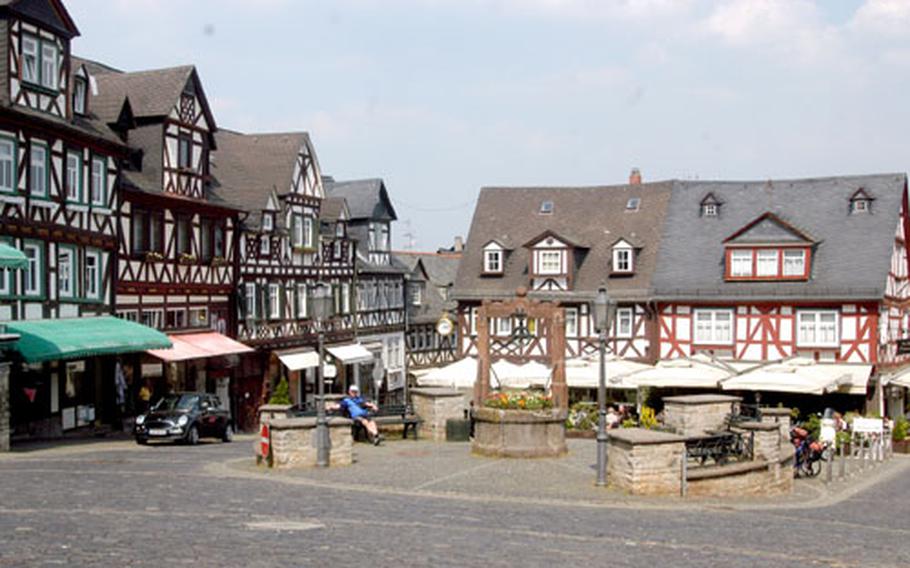 The houses adjacent to the marketplace in Braunfels, Germany, date to the early 1700s. (Kevin Dougherty / S&S)

The houses adjacent to the marketplace in Braunfels, Germany, date to the early 1700s. (Kevin Dougherty / S&S) 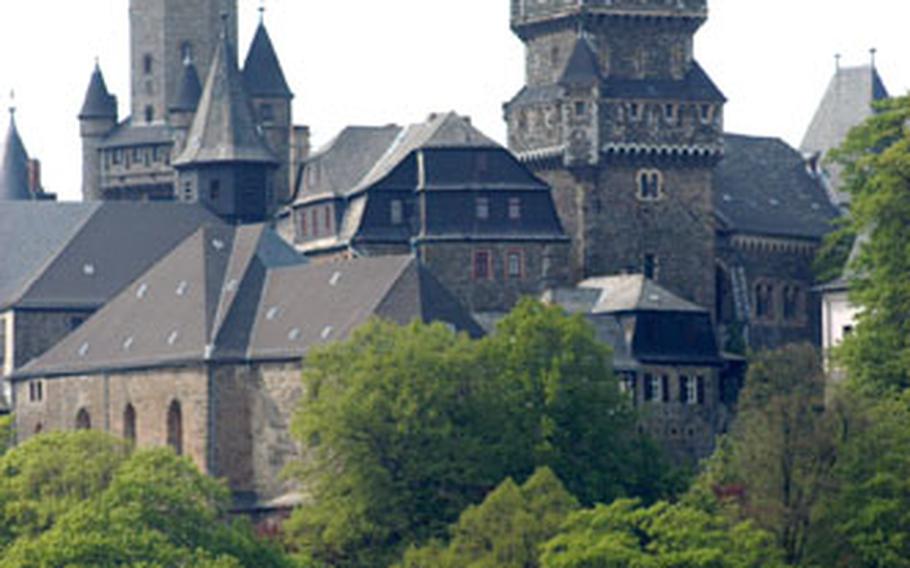 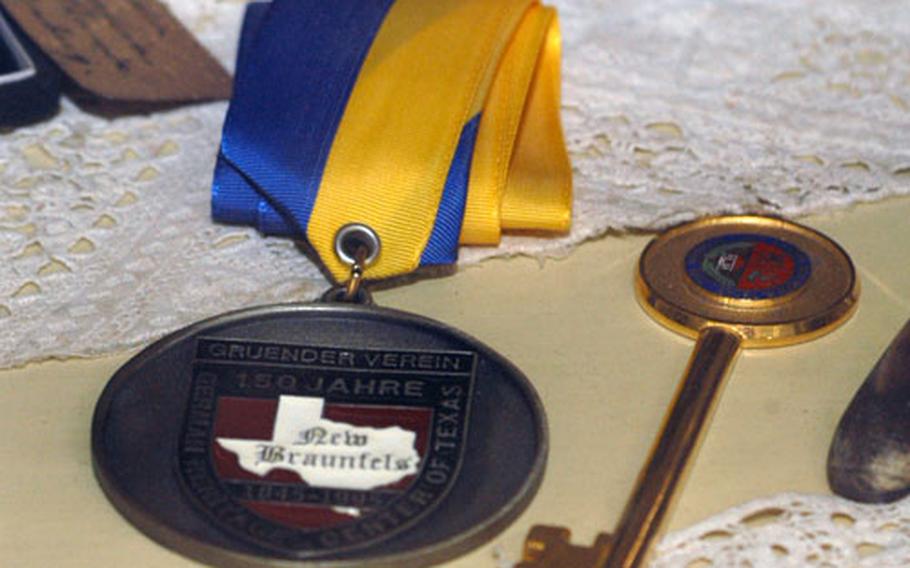 The ties between Braunfels, Germany, and New Braunfels, Texas, continue through visitors and gifts, such as this medal. (Kevin Dougherty / S&S) 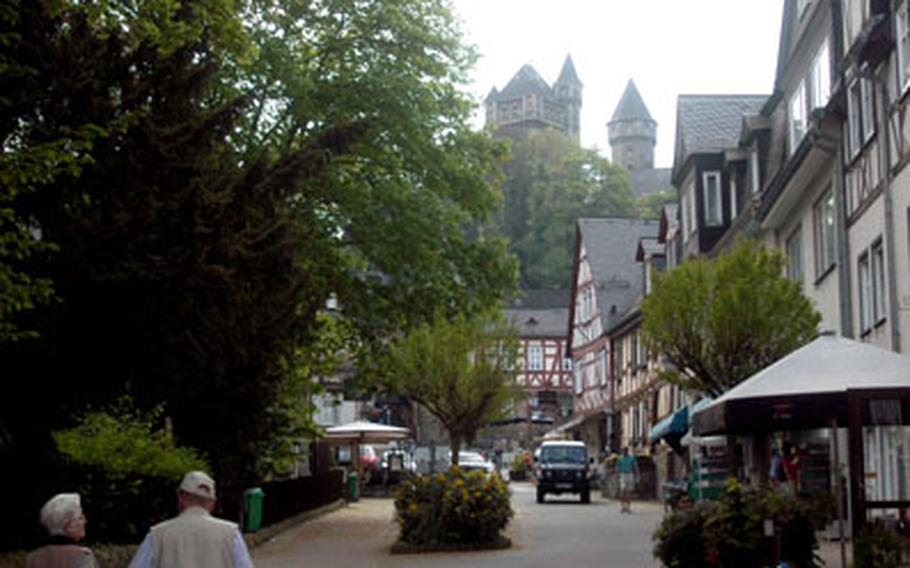 Schloss Braunfels looms over the market square and the rest of the old town. (Kevin Dougherty / S&S)

There once was a handsome young prince known to many as Texas Charlie.

He loved horses, lived in a castle and led men in combat. Viewed by his contemporaries as independent and idealistic, the prince once traveled afar to acquire land and establish a city in honor of his ancestral home.

And then Prince Carl returned to his roots, back to where this tale now leads us: Braunfels, Germany.

There is probably no village in Germany with stronger ties to a U.S. city than Braunfels, located southwest of Giessen.

&ldquo;There is a deep friendship,&rdquo; said Gerhard Adam, a resident of Braunfels. &ldquo;It is unbelievable.&rdquo;

Long after Prince Carl&rsquo;s trip to Texas in 1844-45, New Braunfels adults continued to speak Deutsch to their kids. Church services, Sunday school and public notices were said or written in German well into the 20th century.

Situated between San Antonio and Austin, New Braunfels today might be the only U.S. town with as many German restaurants &mdash; three &mdash; as Chinese. There&rsquo;s a German-language newspaper and a Texas draw called the Schlitterbahn, rated as the best water park in America. And there are annual events with a distinctly German flavor, from the Wein and S&auml;ngerfest in May to the Wurstfest in November.

In Braunfels, Germany, the ties between the two cities are less overt.

Everything a visitor would want to see is in the city center, the old part of town. It features Carl&rsquo;s family castle and a public square of half-timbered homes and shops. But there is no obvious sign of the enduring bond between this 760-year-old city and the settlement on the Guadalupe and Comal rivers.

&ldquo;I wouldn&rsquo;t have noticed [the connection] if it weren&rsquo;t for me coming here to live,&rdquo; said Danne Raborn, who works for the Army and Air Force Exchange Service in Giessen.

On this day, Raborn was walking around the market square with his father, who traveled to Germany to meet his new granddaughter. As fate would have it, the Raborns hail from Texas.

&ldquo;Everybody is friendly,&rdquo; Raborn said of Braunfels. &ldquo;You can even get a tour of the castle in English, if you set it up ahead.&rdquo;

There is an area within the castle museum that celebrates the relationship between Braunfels and New Braunfels. It includes various mementos, from medallions to an 1881 map of New Braunfels.

The 161-year bond is &ldquo;the oldest connection between an American [town] and German town,&rdquo; said Adam, who has visited Texas more than 20 times.

In addition to the castle and square, which is enchanting during the Christmas season, there are other points of interest in and around Braunfels.

Just up the road from the square is the Schloss (Castle) Hotel, briefly used as an Army headquarters after World War II. Long before the war, prior to becoming president, Franklin D. Roosevelt stayed in the hotel after spending time at a spa in nearby Bad Nauheim.

The town also has a nice public park for picnics and open-air concerts, a deer reserve and a network of bicycle and hiking paths. Since the village was not damaged during WWII, the old part of town is roughly as it was when Prince Carl departed on his yearlong trip to the Lone Star state.

On the QTDIRECTIONS: Using Frankfurt as a reference point, head north on Autobahn 5 to the juncture with Autobahn 45, then take A-45 toward Giessen and Wetzlar. Pass the main exits for Giessen. Exit shortly thereafter at Highway 49 and proceed toward Wetzlar. Just beyond Wetzlar there will be signs for Braunfels.

TIMES: Guided tours of the Braunfels castle are given 9 a.m. to 6 p.m. daily (last tour is at 5 p.m.). Shops on the market square close for a couple of hours at midday. The annual Christmas market is the second weekend of December.

COSTS: Prices for the castle tour vary, ranging from 2 euros for children to 12 euros for families. The regular admission fee is 4 euros. A tour that includes the castle tower costs more.

FOOD: There is a nice Italian restaurant on the left as you approach the castle on Am Kurpark. At least three other restaurants are on the square, ranging from Greek to traditional German.

INFORMATION: The tourist office is at F&uuml;rst- Ferdinand-Strasse 4A, on a small plaza just behind the Sparkasse branch bank. Literature is available in English, and someone inside usually speaks English. Requests for tours by Gerhard Adam can be made here. Its Web site is: www.braunfels.de/touristinfo.