The Brauereigaststaette in downtown Stuttgart, Germany, is connected to the Dinkelacker Brewery, one of the main beermakers in the region. While the restaurant serves plenty of food, the big attraction is the beer. (John Vandiver/Stars and Stripes)

The Brauereigaststaette in downtown Stuttgart, Germany, is connected to the Dinkelacker Brewery, one of the main beermakers in the region. While the restaurant serves plenty of food, the big attraction is the beer. (John Vandiver/Stars and Stripes) 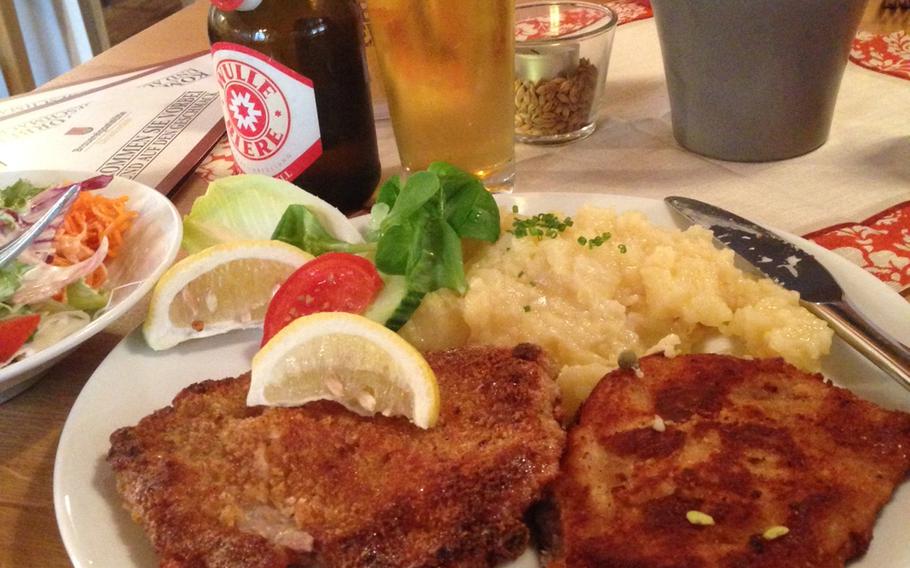 The Brauereigaststaette menu includes what you'd expect at a traditional brewery: lots of schnitzel, served in large portions. (John Vandiver/Stars and Stripes) 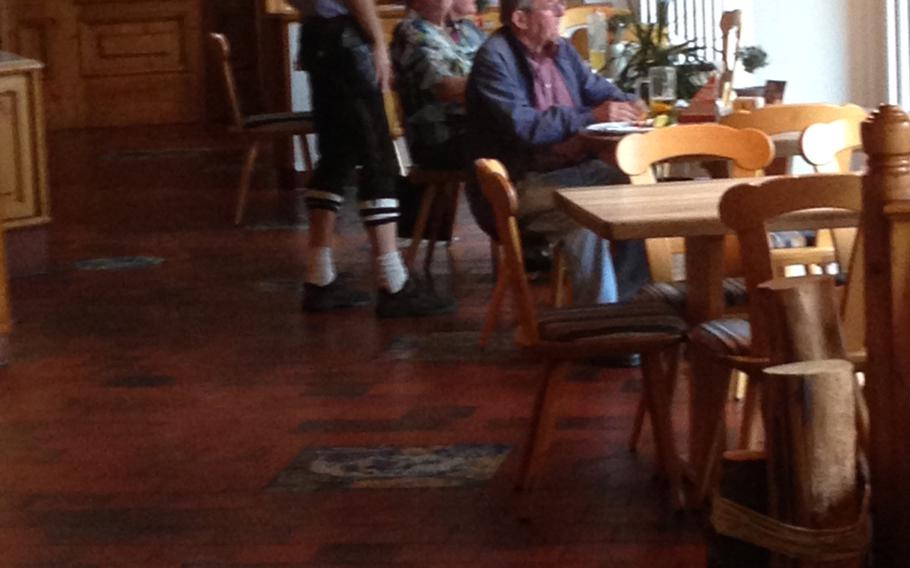 A waiter in lederhosen serves customers at Brauereigaststaette in Stuttgart, Germany. The lederhosen just adds to the rustic flavor of the restaurant. (John Vandiver/Stars and Stripes) If the restaurant is full, you can always find a seat at the little bar at the Brauereigaststaette in Stuttgart. (John Vandiver/Stars and Stripes)

It’s odd that a foul, yeasty, rotten-egglike odor can serve as appetizing ambrosia.

Yet that’s just what occurs if you walk down Tübinger Strasse in downtown Stuttgart, Germany, where a stroll past the Dinkelacker Brewery means an encounter with boiling hops and the stink it produces.

The smell of beer in the making led me into the Brauereigaststaette, a rustic restaurant attached to one of the biggest regional beer makers in the Stuttgart area.

Inside, waiters wear traditional German lederhosen, a signal that the place also is serious about the German national drink: beer.

There also is a rock-solid menu of down-home German cooking: schnitzel, Maultaschen (raviolilike pasta), spaetzle (a type of egg noodle) and meat roasted in beer sauce are among the offerings.

On a recent visit, I ordered the schnitzel seasoned with horseradish, which came with a heaping helping of potato salad and a green salad. To my surprise, the plate was presented with not one, but two, cutlets. That, with a beer, cost 18 euros. Not cheap, but at least the serving was generous, bordering on overflowing American-style excess. It was delicious and filling.

And since the restaurant is connected to a brewery, there are naturally lots of beers to choose from, all connected to the Dinkelacker brand: Sanwald, Wulle and Cluss, to name a few. With rooms that can seat at many as 60 people, it also is a great place to have a big party, though a reservation is required to book a private room.

Strangely, the usually hopping restaurant was mostly empty during my visit, but I suspect that had something to do with my timing: the Cannstatter Volksfest, Germany’s second-biggest beer fest, was going on just a couple miles away.

But fest season will soon pass, so if you’re looking to re-create the magic that is Germany in October, consider heading to the Brauereigaststaette for old-fashion cooking and beer that is always on tap.

Directions: The restaurant is located just off the B-14 before reaching the Heslach tunnel near the square at Marienplatz.