It’s a Slovak tradition to begin a meal with a shot of brandy served in a mini bottle. Slivovica (plum brandy) is the local favorite. (Leah Larkin / Special to Stars and Stripes)

It’s a Slovak tradition to begin a meal with a shot of brandy served in a mini bottle. Slivovica (plum brandy) is the local favorite. (Leah Larkin / Special to Stars and Stripes) 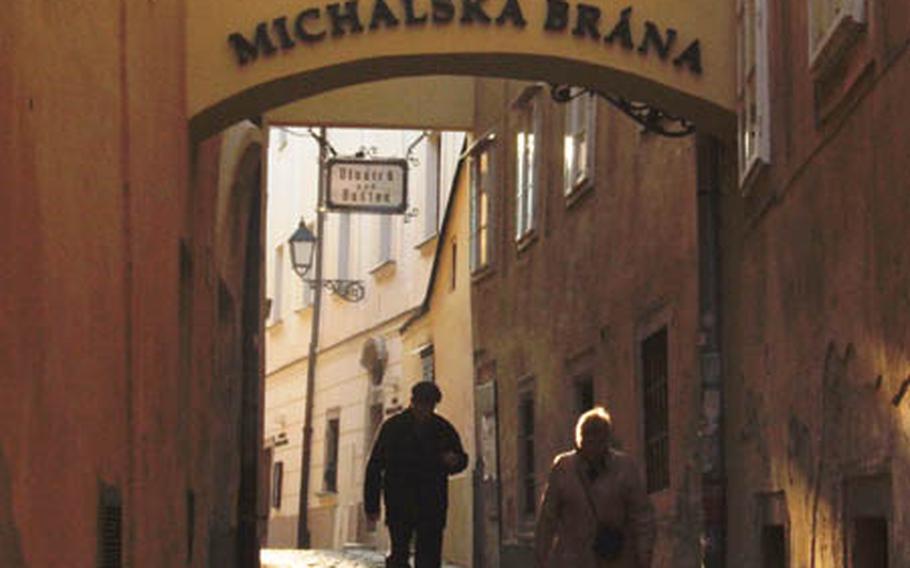 Bratislava’s old town is reminiscent of Prague&#39;s with its narrow alleys and medieval ambience. (Leah Larkin / Special to Stars and Stripes) Wander through Bratislava and you’ll come upon fun and whimsical statues, such as this Napoleonic soldier leaning over a bench.Tourists love to pose next to him. (Leah Larkin / Special to Stars and Stripes) Tourists like to snap pictures of Cumil, a bronze statue of a man playfully peeking out from under a manhole cove supposedly so he could look up the skirts of passing women. The statue has become one of the city’s chief attractions. (Leah Larkin / Special to Stars and Stripes)

Bratislava is booming. The Slovak capital of 450,000 inhabitants has undergone extensive renovation in recent years and is becoming a hit with foreign visitors.

"Bratislava offers lots of amusement, good cuisine, relaxation and a wealth of history to tourists," says Dana Madunicka, public relations manager of the city&rsquo;s airport. He said the airport anticipates an increase in traffic of 10 percent to 12 percent this year as people learn more about the city.

Since Czechoslovakia overthrew communism in 1989 and Slovakia split with the Czech Republic in 1993, there have been major changes and improvements throughout the country. But progress has been fastest in the capital city, which is spread out on the banks of Europe&rsquo;s second longest river, the Danube.

Viera Norisov&aacute; of the Slovak Tourist Board says that 90 percent of the houses in the historic city have been rebuilt, to go along with the "new streets, new exclusive shops and shopping centers open 24 hours." She also said that most young Slovaks speak English, which they learn in school and like to use with foreign visitors.

While not quite in the same league as Vienna, Prague or Budapest, Bratislava is a pleasant, lively place to visit. And it's an easy excursion by bus or hydrofoil to nearby Vienna (40 miles away) and/or Budapest (116 miles).

We started a recent city visit with an uphill trek to the city&rsquo;s castle. Bratislava was the capital of the Kingdom of Hungary under the Hapsburg monarchy from 1536 to 1783. Under Maria Theresa (1740-1780), the city became the largest and most important city in the territory of present-day Slovakia and Hungary. But the glory began to fade when Maria Theresa&rsquo;s son Joseph II took over and the crown jewels were moved to Vienna in 1783 in an attempt to strengthen the union between Austria and Hungary.

The castle, first mentioned in recorded history in 907, underwent numerous architectural changes through the ages. It burned down in 1811 and remained a hulk of empty ruins until 1953. when renovation began, continuing until 1968. From far off, it looks like an upside-down table &mdash; four towers (legs) extending from the building (the table top).

Unfortunately, the interior of the castle, which houses the Slovak National Museum, was closed for extensive renovation and will remain so for several years. But the views of the town and surroundings from atop the castle walls are superb.

At the foot of the castle is the charming old town with a labyrinth of twisting streets and cobblestone squares. St. Martin&rsquo;s cathedral, where 11 Hungarian kings and eight royal wives were crowned, sits at the edge of the old town and was once part of the city&rsquo;s walls.

Wandering through the narrow alleys behind the cathedral is reminiscent of Prague with a Middle Ages ambience. Watch for St. Michael&rsquo;s Gate, the only preserved gate of the medieval city fortifications. Despite the changes to its appearance through the ages, its 168-foot tower still dominates the area.

I made a delicious discovery just down from the gate: Cokol&aacute;dovna pod Michalon, a chocolate caf&eacute; with what must be the world&rsquo;s best hot chocolate. It had 44 kinds, most with liqueurs &mdash; dark, thick and sinfully delicious. I went for Indian hot chocolate, flavored with rum, cloves, cinnamon, orange peel and whipped cream.

I found more places for edible treats on the city&rsquo;s main square, Hlavne Namestie, where architectural gems have been restored and now house embassies, and Maximilian&rsquo;s, a pastry shop/caf&eacute; with a fountain flowing with liquid chocolate. Opposite is the Caf&eacute; Mayer, another noted cafe and pastry shop famous for its razky, the city&rsquo;s signature pastry, crescent-shaped with a tasty filling of ground walnuts or poppy seeds.

But the best culinary experience was a meal at the Slovensk&aacute; Re&scaron;taur&aacute;cia, a restaurant with old Slovak d&eacute;cor and cozy wooden booths separated by lattice panels.

My friends and I went for broke, choosing the "Stroll Through Slovak Gastronomy" five-course menu. A waiter came by with a cart laden with bottles &mdash; numerous kinds of brandy. It&rsquo;s a Slovak custom to begin the meal with a shot. Everyone chose a different flavor, from peach to blackberry. I went for the local staple, slivovica (plum brandy).

Slovakia makes excellent beer, which was the recommended beverage for this hearty feast of smoked trout, garlic soup with fried bread, goose liver in red wine sauce, a farmer&rsquo;s platter of grilled meats, and the fabulous finale, a choice of several types of homemade strudel.

I was lucky during a visit to the Primate&rsquo;s Palace, an elegant, classical palace from the end of the 18th century that was once the archbishop&rsquo;s winter palace and is now the mayor&rsquo;s office. Its lavishly decorated rooms were not in use for an official ceremony, so tourists could visit the Hall of Mirrors with its series of six stunning English tapestries from the 17th century illustrating the legend of Hero and Leandros.

I followed up with a stroll along Hviezdoslavovo Namestie, a long mall-like boulevard with the Slovak National Theater on one end and a small square near the city&rsquo;s famous New Bridge on the other. Trees, fountains, a gazebo, cafes and the American Embassy line the boulevard.

The bridge, a futuristic suspension bridge built in 1972 with a single pylon, is a city symbol. I rode the elevator to the top of the bridge tower where there is a viewing platform and the panorama UFO restaurant, so named because of its flying-saucer shape.

The city is also known for its whimsical statues. One on the main square depicts a Napoleonic soldier leaning over a bench. Tourists love to pose next to the fellow, who was said to have been left behind by the French after they besieged the city in 1809.

Another is of a man peeping out of a manhole. They say the character, known as Cumil, is trying to look up the skirts of passing women.

More of these surprises are spread throughout the city. They&rsquo;re all part of the old city&rsquo;s new spirit.

$1 equals around 20 Slovak koruna (SKK). Due to the weakness of the dollar, Bratislava is no longer the bargain for Americans it once was. Yet, it&rsquo;s not as expensive as most European capitals.