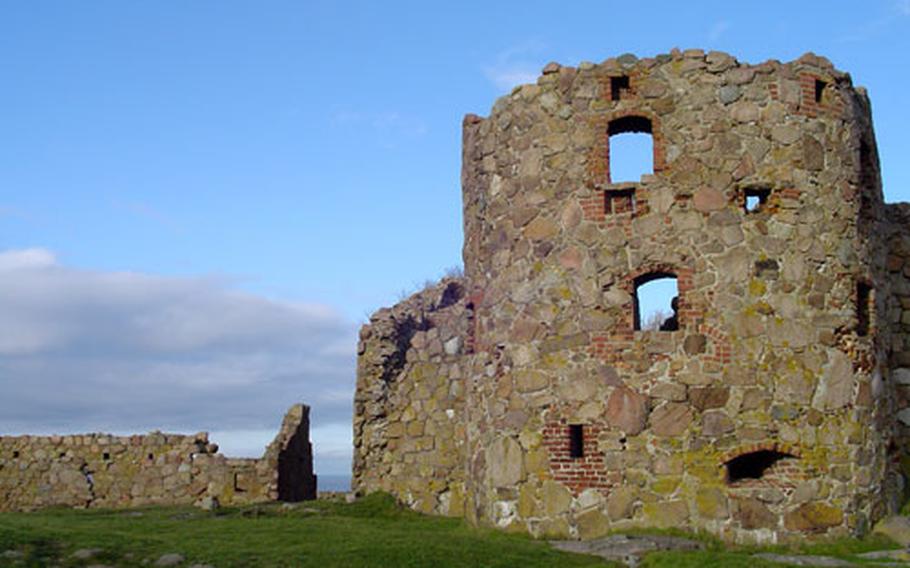 The ruins of Hammershus Slot, on the northwest corner of Bornholm, is a good place to explore or relax, depending on the weather and your mood. (Nathan Saunders / Special to Stripes)

The ruins of Hammershus Slot, on the northwest corner of Bornholm, is a good place to explore or relax, depending on the weather and your mood. (Nathan Saunders / Special to Stripes) A lone fisherman braves the chilly Baltic Sea waters along a rocky stretch of Bornholm’s west coast. The island’s shores — many popular swimming and sunbathing attractions in the summer — transform into quiet, calm seascapes in the winter. (Nathan Saunders / Special to Stripes) 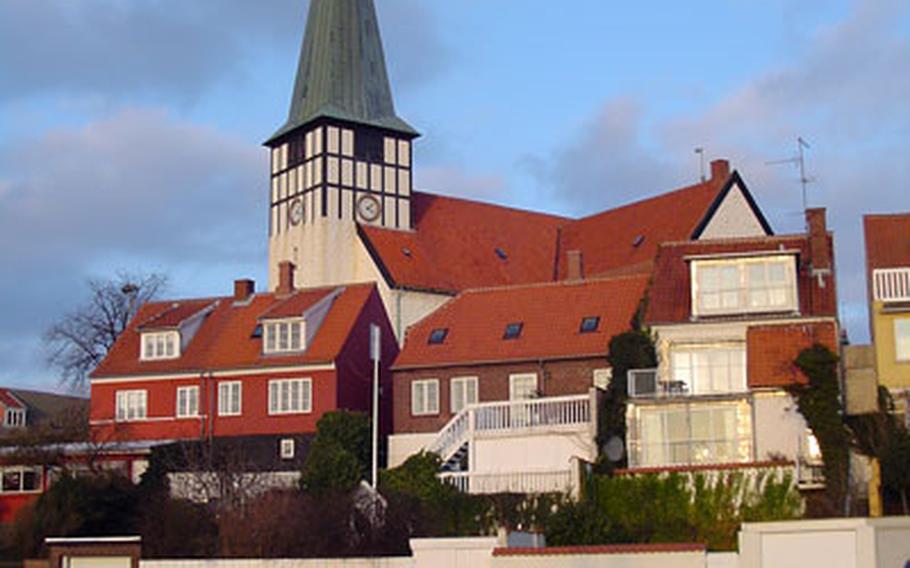 Bird-watchers take a break on the island of Frederiks∅, one of the tiny Ertholmene islands north of Bornholm. (Nathan Saunders / Special to Stripes) 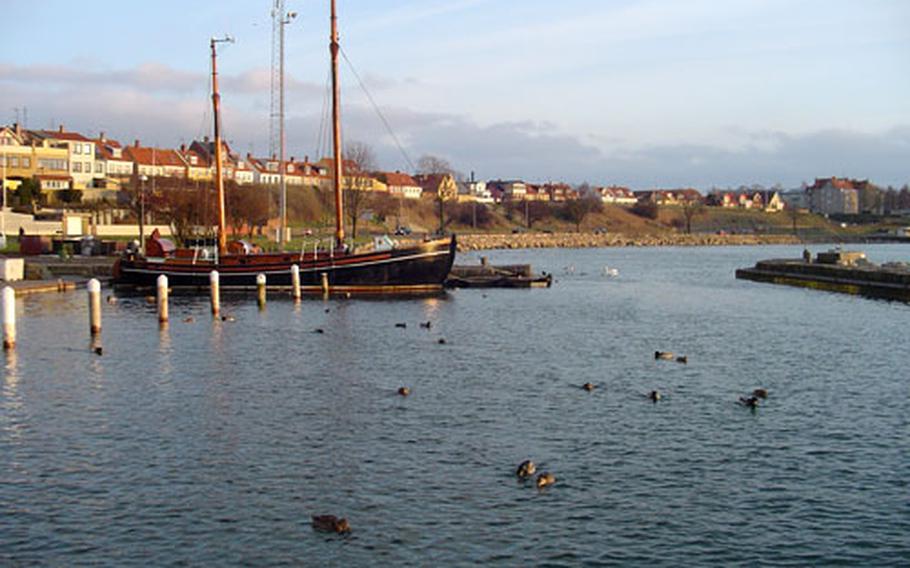 On an island replete with harbor towns, R∅nne is Bornholm’s busiest as well as one of the most beautiful. Passenger and cargo ships stop at the port, as do fishing and pleasure boats. (Nathan Saunders / Special to Stripes)

I think it might be the free spirits of the inhabitants that make islands such desirable destinations.

Whatever it is, Bornholm and nearby Ertholmenes &mdash; Danish islands in the Baltic Sea 140 miles east of the rest of the country &mdash; have plenty of it.

The sun had already set before I flew in from Copenhagen on a February afternoon. Although I couldn&rsquo;t make out details in the darkness, the sea breeze and the cawing of the gulls indicated that my room in R&empty;nne, Bornholm&rsquo;s largest town, was only minutes from the water.

When I awoke, I could see the water glistening through the window in my room. As swans, smews and gulls chased one another across the round harbor, I devoured my breakfast, eager to explore the island.

Following the edge of the harbor to the center of town, I rented a five-speed bike at the first cycling shop I found. Bornholm is shaped like a parallelogram: the east and west coasts are about 14 miles long and the north and south shores each about 20 miles. It&rsquo;s also fairly flat and crisscrossed with well-maintained cycling routes, making biking a fairly easy and cheap way to get around year round.

After picking up a map at the welcome center, I started north along a path that roughly followed the island&rsquo;s western shore. My goal was the ruins of Hammershus, a 12th-century fortress.

Thick, piney woods concealed campsites, no doubt popular places in the summer, and signs pointing to bathing beaches made me wish for warmer weather. When I reached the village of Hasle, the forest gave way to farmland and the path began to cling to the coastline. Without the wind-blocking trees, riding became difficult.

Still, the salty sea breeze and the indigo-blue Baltic made up for the harder riding and rain droplets that materialized on my glasses. A few kilometers later, the trail cut inland, steep stretches of the path straining my quadriceps as I worked back into the woods.

Three hours and 12 miles from R&empty;nne, I reached a clearing with a view of my destination &mdash; Hammershus, a fortress dominating Bornholm&rsquo;s northwest promontory. A colossal conglomerate of brick and stone, the expansive remnants of the fortress provided a stunning setting for lunch.

A vine-covered wooden fence bordered the path to the castle, which offered remarkable views of the island&rsquo;s west coast, as well as glimpses of the southern tip of Sweden. To the northwest, a ferry coasted south, probably headed to R&empty;nne, reminding me that it was time to head back myself.

The next day, I took a bus to Bornholm&rsquo;s north shore. Gudhjem, a cozy and quiet harbor town with a windmill and lots of sea on the horizon, deserved a visit of its own. But on this day, my reason for going there was to get a ride to the Ertholmene islands, a set of rocky outcroppings 12 miles north of Bornholm.

This tiny archipelago, home to countless waterfowl as well as roughly 100 people, was settled in 1684 when Christian V decided to build fortifications there to monitor Swedish shipping and to serve as a forward naval base. The Danes erected towers, barracks, and cannons on the two largest islands, Christians&empty; and Frederiks&empty;, which are connected by a simple footbridge. Graesholmen, a third island, was literally left to the birds and is today an aviary off limits to visitors.

For over an hour I sipped coffee and sat on the side of the deck of the ship, letting the sun and its white reflection in the sea warm my hands and face. The towers on the little islands were visible in the distance. Upon arrival, the mail boat glided into a natural harbor &mdash; the channel separating Christians&empty; and Frederiks&empty;.

As the ship&rsquo;s crew unloaded its mail and supplies from Bornholm, I headed for the far side of Frederiks&empty;. From there I scrambled along the slippery shore outside the fortress walls where eider ducks build their springtime nests. Squinting, I looked for puffins on nearby Graesholmen.

Crossing back to Christians&empty;, I walked down The Street, the cobblestone path lined with yellow barracks and a couple of shops above the harbor. I&rsquo;d hoped to send my parents a postcard, but was too late; the post office (open 10:30 a.m. to noon on weekdays) had closed. I settled for a quiet walk along the cannon-fortified walls, past officers&rsquo; quarters that blended into the landscape as if they had emerged there instead of having been built.

Such co-existence fits into the lifestyle on the Ertholmenes, where pets and cars are prohibited in deference to nature. The activities of the eiders, guillemots and razorbills are well monitored; unsurprisingly, birds made for quick conversation with the people I encountered there.

But something about the place was unsettling. A fascinating, improbable location, but there was so much seclusion &mdash; even on such a small land mass, there were still times during my visit that I felt entirely alone.

When it was time for the ferry to head back to Bornholm, the ship&rsquo;s captain suggested I stay the night. Mesmerized, I respectfully declined.

Over breakfast the next morning, I heard that there was once an old woman on Frederiks&empty; who has never left, not even to cross the footbridge to Christians&empty;. It sounded like the kind of tale that could have been embellished over time. But nonetheless, I can imagine that woman strolling on the green grass, watching the birds, admiring the sea and the waves, her spirit living in blissful tranquility.

Nathan Saunders is a freelance writer based in Berlin. E-mail him at: nathan.saunders@yahoo.com.

Know and GoDestination: Bornholm and the Ertholmene Islands.Getting there: From mainland Europe, it&rsquo;s easiest to reach Bornholm via Copenhagen. Cimber Air (www.cimber.dk) flies several times a day directly to Bornholm from Copenhagen&rsquo;s main airport southeast of the city. Flights are 45 minutes and can cost as little as $95 per person round trip when booked in advance.Other options from Copenhagen include bus- boat (www.graahundbus.dk, Danish only) and train-boat (www.dsb.dk), combinations that connect in Sweden. Either route costs about $45 and lasts three to four hours each way.

From Germany, the only direct sea route to Bornholm runs from Sassnitz to R&empty;nne and operates seasonally from late March to mid-November. A one-way, 3&frac12;-hour crossing costs 24 euros (about $35) during high season (June 21 to Aug. 31) and 16 euros otherwise. For more information, see the Web site www.bornholmstrafikken.dk.

Getting around: In good weather, a bicycle is an excellent option for transportation. Visitors can rent bikes from cycling shops in R&empty;nne for around $15 per day. The local bus system (www.bat.dk) covers the island extensively and fares are reasonable. Ferries leave to the Ertholmene islands year-round from Gudhjem, and seasonally from Allinge and Svaneke. A round-trip fare is about $35.Where to stay: R&empty;nne provides the widest selection of accommodations on the island, from campsites ($12 per adult, www.gallokken.dk) to plush hotels (www.bornholmhotels.dk). The welcome center (www.bornholm.info) also will book rooms in private homes. Hostelling International (www.hihostels.com) endorses a number of facilities across the island at typically affordable rates.

It&rsquo;s also possible (although pricey) to spend the night in Christians&empty;. The hotel Christians&empty; Gaestgiveriet offers doubles for about $150 a night. Get reservation details from the Bornholm welcome center.

Currency: Denmark&rsquo;s currency is the Danish kroner. $1 equals about 5.1 kroner; 1 euro is worth about 7.5 kroner.&mdash; Nathan Saunders