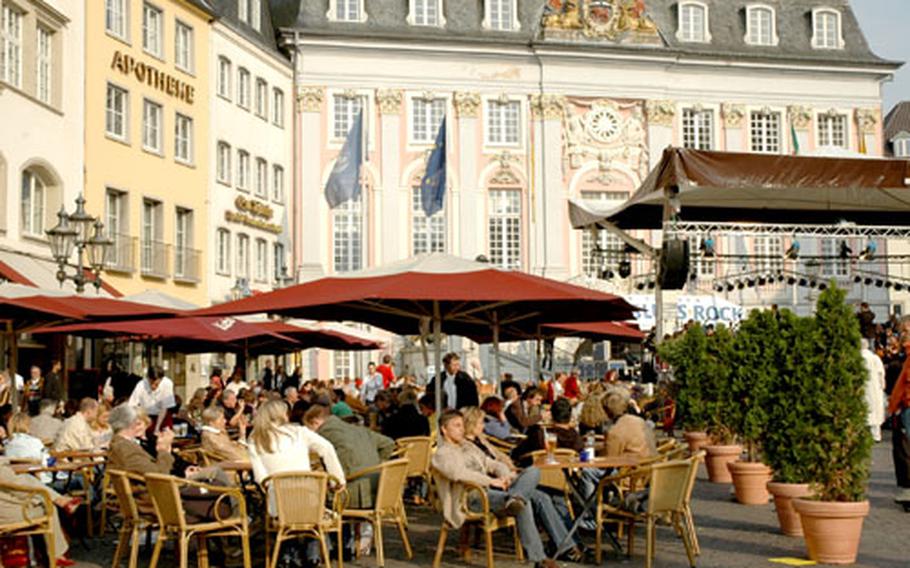 Patrons enjoy a few beers and some live music in front of the town hall in downtown Bonn, Germany. The city is known for its music and hosts open-air concerts throughout the summer. (Robin Hoecker / S&S)

Patrons enjoy a few beers and some live music in front of the town hall in downtown Bonn, Germany. The city is known for its music and hosts open-air concerts throughout the summer. (Robin Hoecker / S&S) 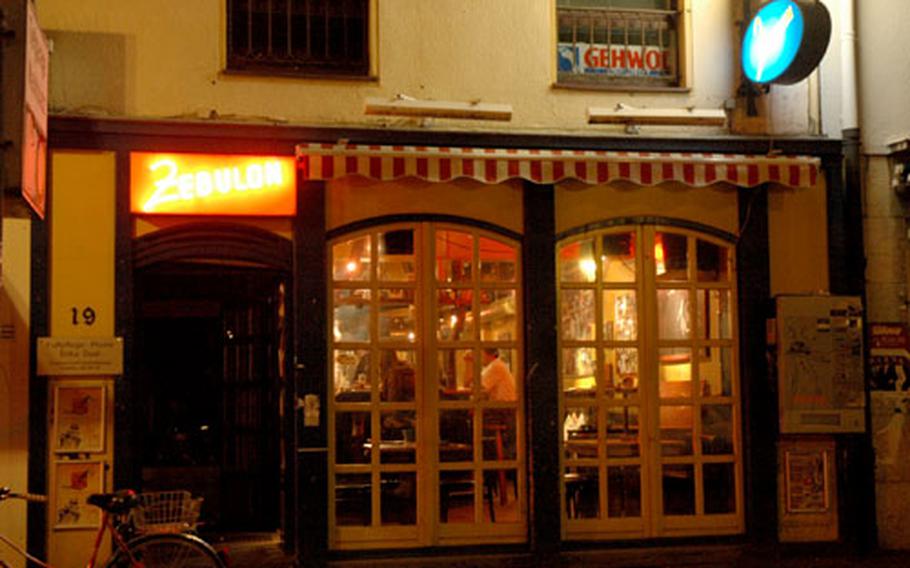 Zebulon bar draws a diverse crowd, including at least a handful of Americans on any given night. The friendly staff and good musical playlist make it a popular hangout. (Robin Hoecker / S&S) 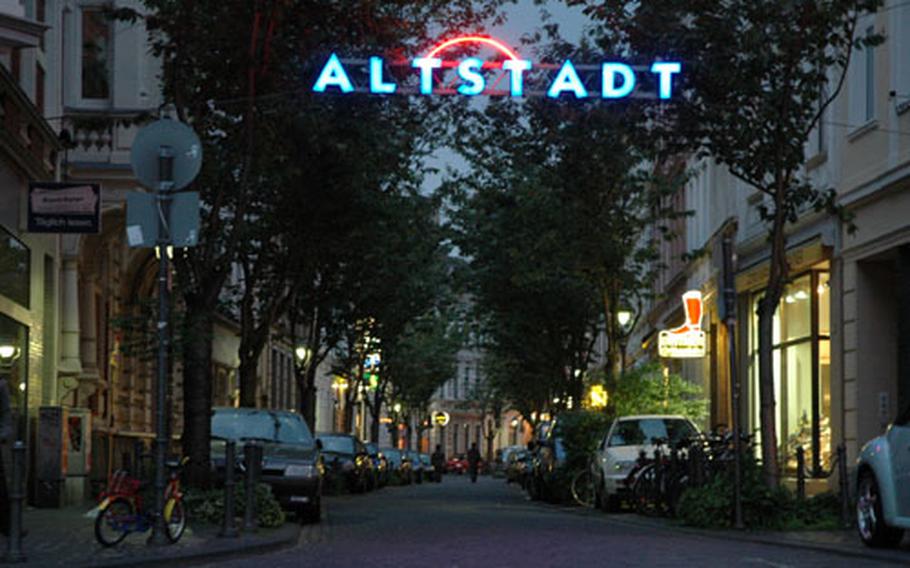 The narrow streets of the Altstadt, or old city, are lined with restaurants and bars. The area is busiest on weekends. (Robin Hoecker / S&S) 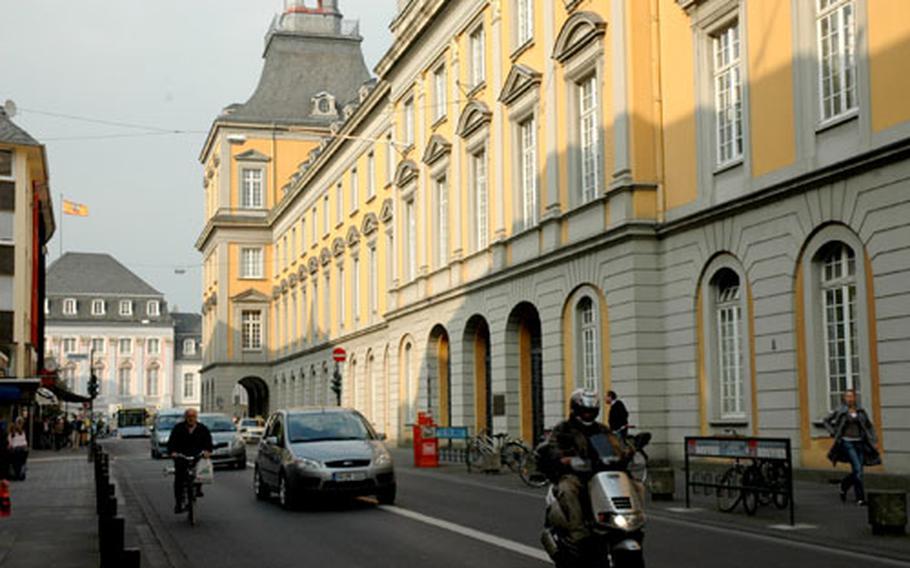 The yellow classroom building at the University of Bonn is one of the city’s most easily recognizable landmarks. (Robin Hoecker / S&S) 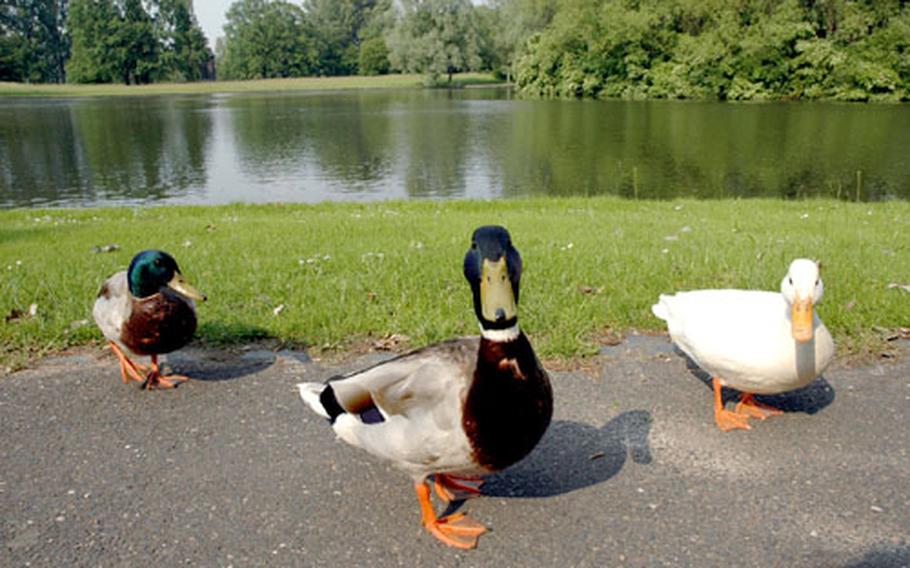 Bonn may have lost its star on the map, but it hasn&rsquo;t lost its luster.

The capital of West Germany until reunification in 1990, Bonn has the culture of a capital city &mdash; minus the bureaucrats.

Bonn is perhaps most famous for its music. Ludwig von Beethoven was born and reared in the city, a fact visitors cannot forget. Schools, boats, streets and buildings bear Beethoven&rsquo;s name, and the musician&rsquo;s stern face and sea-urchin hairdo are stamped all over the city.

These days, the musical tradition continues. Beethoven wannabes sometimes play in the streets for money, offering a nice soundtrack to a stroll past downtown&rsquo;s candy-colored buildings. The city also hosts open-air rock concerts throughout the summer. Some are free and others can cost up to 50 euros.

If the weather is nice, don&rsquo;t miss the Rheinaue, a 400-acre park on the outskirts of town. There is enough to do in the park to keep a family occupied for a day. In addition to the nearly 30 miles of paved paths, the Rheinaue contains miniature golf, multiple playgrounds, flowerbeds and a Japanese garden, not to mention several ponds and waterfalls. There are also paddle boats for rent for use on the ponds.

With its expansive grassy fields, Rheinaue is a great place to toss a Frisbee or have a picnic. Beware of the slightly aggressive ducks looking for crumbs.

For those who don&rsquo;t want to pack a lunch, there are two cafes and a beer garden in the park. The beer garden is up on a hill and has a spectacular view of the flower garden, the Rhine valley and the famous Siebengebirge, or seven hills.

Tour boats frequently travel up and down the river and leave from the Alter Zoll downtown. Trips can last anywhere from 10 minutes to three hours. You can visit the Siebengebirge and its Drachenfels castle by car, bike, streetcar or boat.

If the weather is bad, no worries. Bonn is full of theaters and nearly 40 museums. Five clustered together make up the Museum Mile.

The Museum Mile is also the site of a series of open-air concerts, beginning Thursday with Deep Purple and Alice Cooper. Other performers include: John Fogerty on July 2; the Who, July 11; Juanes, July 12; and Seal, July 21.

If you&rsquo;re looking for a fun place to hang out and grab a beer, head back downtown to the Zebulon bar. Zebulon, at Stockenstrasse 19 near the Rathaus and across the street from the canary yellow university building, attracts plenty of students and the young at heart who go to enjoy the flowing beer, friendly atmosphere and a great assortment of recorded music ranging from Bob Dylan to Rage Against the Machine. It&rsquo;s the kind of place a person can go to alone and find people to chat with until the small hours.

For more bar and cafe alternatives, walk 10 minutes to the Altstadt, just north of the center of town. A neon sign marks the beginning of the district and a host of restaurants and bars.

On the QTDirections: Bonn is on the Rhine River between Koblenz and Cologne. It is accessible via Autobahn 61, south of the Rhine, or A-3, north of it. Exit A-61 at the juncture with A-585 and follow it north into the city. From A-3, exit at A-580, follow it to A-585 and take that across the Rhine to Bonn; or follow A-585 to A-59 and take that into Beuel and across a bridge into downtown Bonn. The city also can be easily reached by train.

Times: A good time to visit would be during a city festival: the Bierb&ouml;rse, with more than 600 kinds of beer, July 21-23; or the R(h)einkultur, a huge outdoor rock concert, July 1. The Rheinaue, a park on the outskirts of town, and museums are open year round, although most museums are closed Mondays.

Costs: Admission costs for the museums vary, but many are free for those with the Bonn Welcome Card. The card is a great deal and covers public transportation and entrance fees to more than 20 museums, plus discounts on ferry rides and other activities. It is available for 24, 48 or 72 hours. Tickets for the Museum Mile concerts typically range from 20 to 40 euros; for details see www.bonnticket.de. A round trip by boat to Koenigswinter and Drachenfels castle is 12 euros; details at www.b-p-s.de.

Food: Food of all kinds is available throughout the old town.

Information: The city tourist office, at Windeckstrasse 1/am M&uuml;nsterplatz, is open 9 a.m. to 6:30 p.m. weekdays; 9 a.m. to 4 p.m. Saturdays; and 10 a.m. to 2 p.m. Sundays and holidays. Its Web site is www.bonn.de. For details on the city and the welcome card, available in English, see www.bonn-regio.de (under travel information).