The "Fabulous Break" combo at Birdy's Bakery in Naples, Italy, matches French toast and jam with a brioche draped in whipped cream, Nutella and cookie crumbles. ( Steven Beardsley/Stars and Stripes)

The "Fabulous Break" combo at Birdy's Bakery in Naples, Italy, matches French toast and jam with a brioche draped in whipped cream, Nutella and cookie crumbles. ( Steven Beardsley/Stars and Stripes) The American-style breakfast at Birdy's Bakery in Naples, Italy, is perhaps the closest thing to a hearty breakfast to be found in a southern Italian city that prefers a single, sweet pastry to start the morning. ( Steven Beardsley/Stars and Stripes) Forget the drip coffee and stick with cappuccino at Birdy's Bakery, a trendy brunch joint in the Chiaia neighborhood of Naples, Italy, that offers an American-style breakfast. (Steven Beardsley/Stars and Stripes) 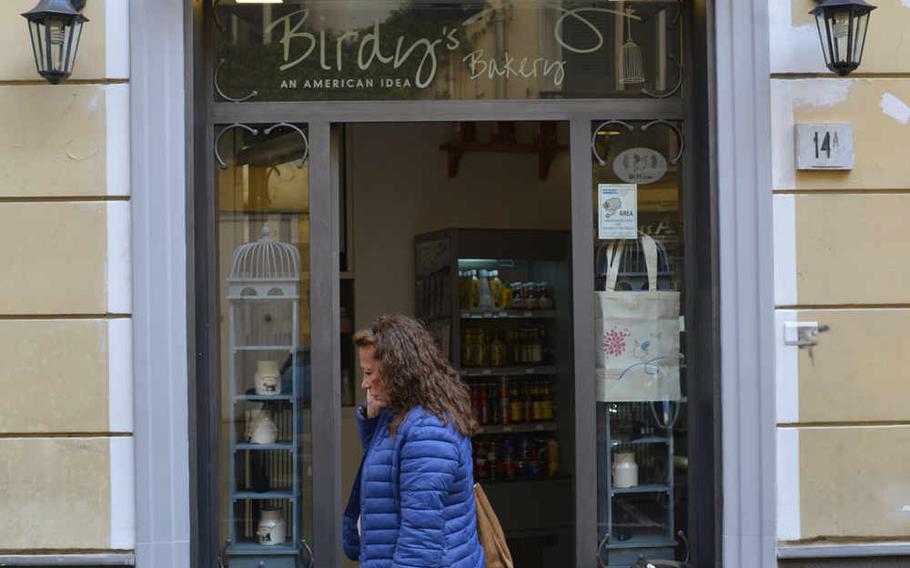 Birdy's Bakery, a trendy brunch joint in the Chiaia neighborhood of Naples, Italy, is brunchy cute. But the food makes up for that. (Steven Beardsley/Stars and Stripes)

What’s a mug of drip coffee worth in this espresso-crazy town?

Birdy’s Bakery, a trendy little brunch place in Naples’ Chiaia district, charges 2.50 euros (about $2.75) for a single, mediocre cup of joe. No refills. That’s a good reminder of just how foreign the American style of breakfast — and its bottomless cup of coffee — remain in this region, where a cappuccino and a pastry are the most typical starters.

Birdy’s tries hard, nevertheless. Between the omelets and the hash browns, it’s the closest thing I’ve found to the hearty, grease-infused breakfast most of us miss from home.

This isn’t the Denny’s Grand Slam, to be sure. Birdy’s is brunch-y cute, from the immaculate cupcakes and muffins displayed at the front to the rose-colored interior and faux-antique decor.

The food makes up for Birdy’s preciousness. The American breakfast combo comes with scrambled or fried eggs, toast, hash browns and seared prosciutto (sorry, no bacon here). The omelet is a fair replica of what can be found stateside, although a bit simpler.

Lighter options include oatmeal or a yogurt and granola combo. Those with a sweet tooth can indulge in the French-toast banana-and-brioche combo, although we found the whipped cream and Nutella topping on the brioche a bit much.

Birdy’s hits a few false notes. You’ll pay extra to smear butter or jam on your toast. The lack of bacon or sausage takes some steam out of the American breakfast combo. And where are the grits?

Those criticisms are mostly unfair. Naples isn’t known for culinary diversity, and breakfast ranks low on the list of priorities (Asian? Indian? Continental European?). And Birdy’s shines more than it misses. The hash brown triangles are terrific. The bagel sandwiches are even better, each arriving hot and with a small side of fries. Those who like their tea and fancy cakes are also in luck.

The weekend brunch menu will clinch it for others, mixing up savory-sweet items like smoked salmon, hamburger and pancakes.

American coffee comes with some orders, but diners should consider swapping it out for a cappuccino. Birdy’s drip coffeemaker doesn’t appear to get much use—for good reason.