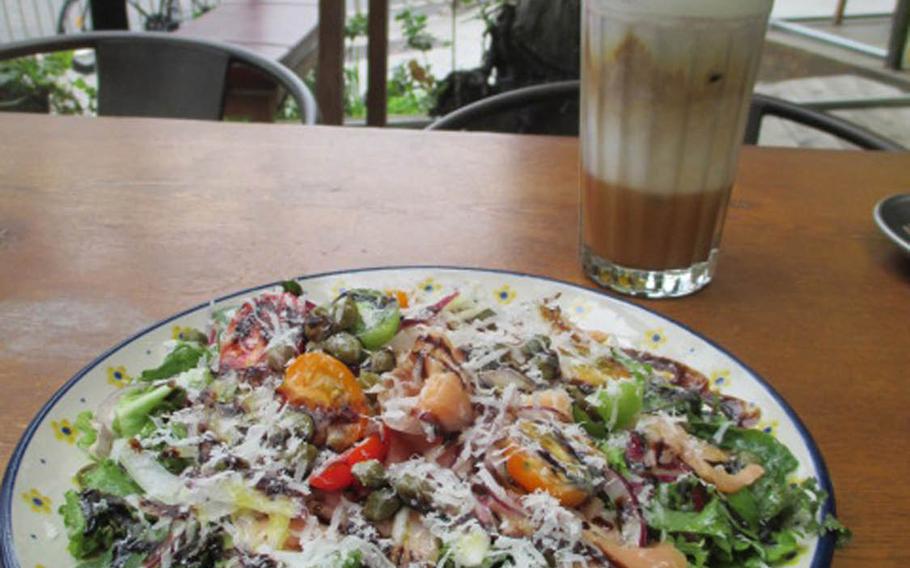 A salmon salad, a caramel macchiato and a view from the patio at Bermuda, a bar-restaurant in Itaewon across the street from U.S. Army Garrison Yongsan in South Korea. (Ashley Rowland/Stars and Stripes)

A salmon salad, a caramel macchiato and a view from the patio at Bermuda, a bar-restaurant in Itaewon across the street from U.S. Army Garrison Yongsan in South Korea. (Ashley Rowland/Stars and Stripes) 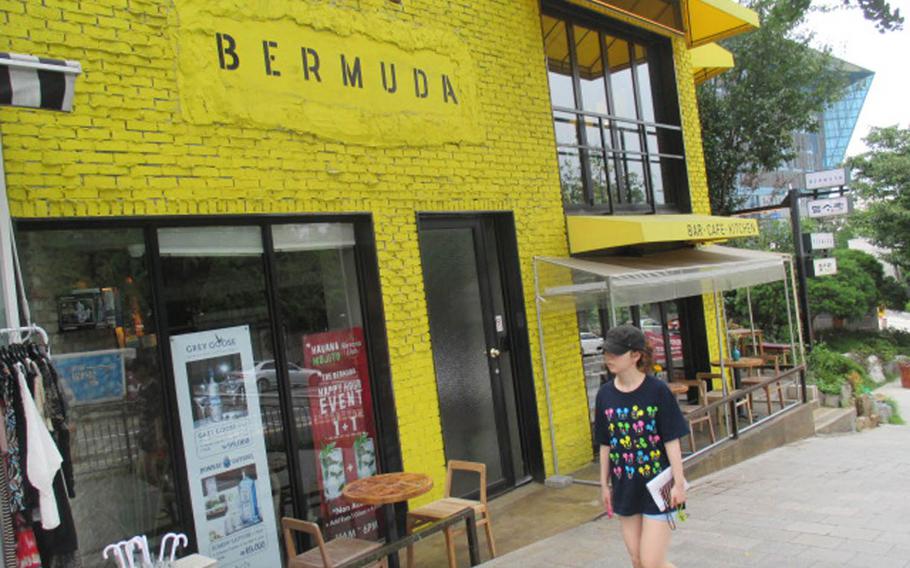 Bermuda's bright yellow exterior stands out in Itaewon and can been seen from U.S. Army Garrison Yongsan's Gate 5 in South Korea. (Ashley Rowland/Stars and Stripes)

A yellow brick exterior caught my eye in a sea of drab buildings as I searched for a place to eat just outside U.S. Army Garrison Yongsan.

That, and a place I could dash to quickly without worrying about getting drenched by rain on an overcast day.

Bermuda, within sight of Yongsan’s walk-in Gate 5, is a self-proclaimed bar-cafe-kitchen. Depending on your point of view, it’s either a cool drinking spot with hearty food to soak up the alcohol or a restaurant with a prominently featured, well-stocked bar.

A visit to Bermuda feels a bit like going to your favorite Mexican restaurant in the states, minus the tacos and kitschy sombreros. There are sunflowers on the tables and strings of lights throughout the restaurant, which also has patio seating.

During my visit on a weekday in the early afternoon — not exactly prime-time bar hopping hours — club music thumped loudly, though not obnoxiously.

I took a seat outside where I had a view of several lanes of heavy traffic, but that was far less bothersome than the Korean man who wandered from the sidewalk to my table to try to practice his English.

I ordered a salmon salad, which came with a generous portion of fish on a bed of lettuce topped with capers, a tart-sweet balsamic sauce, cherry tomatoes and a dusting of grated cheese.

I finished my meal with a sugary iced caramel macchiato (7,000 won).

Service was quick during my visit; however, the restaurant was empty aside from a few tables of 20- and 30-somethings lingering over a leisurely meal.

Directions: Near the blue archway that marks the entrance to Itaewon. Go to the crosswalk near Yongsan’s Gate 5, cross the street and turn right. Walk for about a minute and Bermuda will be on your left.