Berlin: The story behind a famous and weird photograph 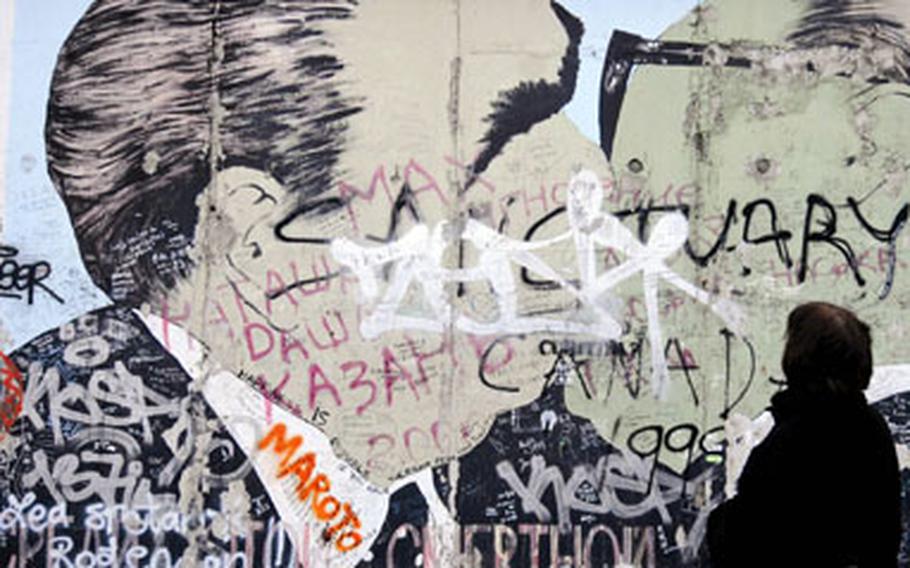 Buy Photo
The original Dmitri Vrubel painting of the “The Kiss,” created in 1990 at the East Side Gallery, has been badly damaged by weather and graffiti artists. (Photos by Peter Jaeger/Stars and Stripes)

Buy Photo
The original Dmitri Vrubel painting of the “The Kiss,” created in 1990 at the East Side Gallery, has been badly damaged by weather and graffiti artists. (Photos by Peter Jaeger/Stars and Stripes) 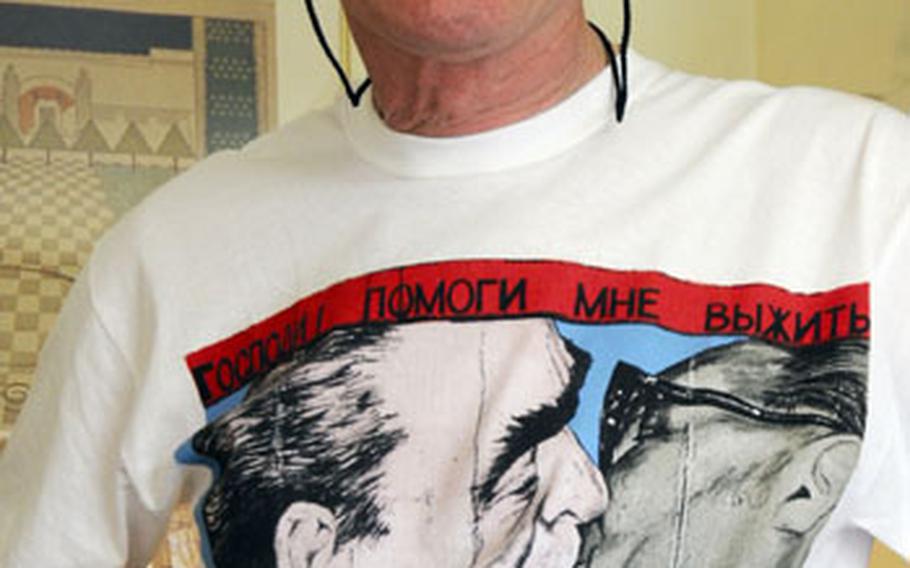 French photographer Régis Bossu proudly wears a T-shirt showing the painting based on his photograph. The shirt was sold at Berlin souvenir shops. () 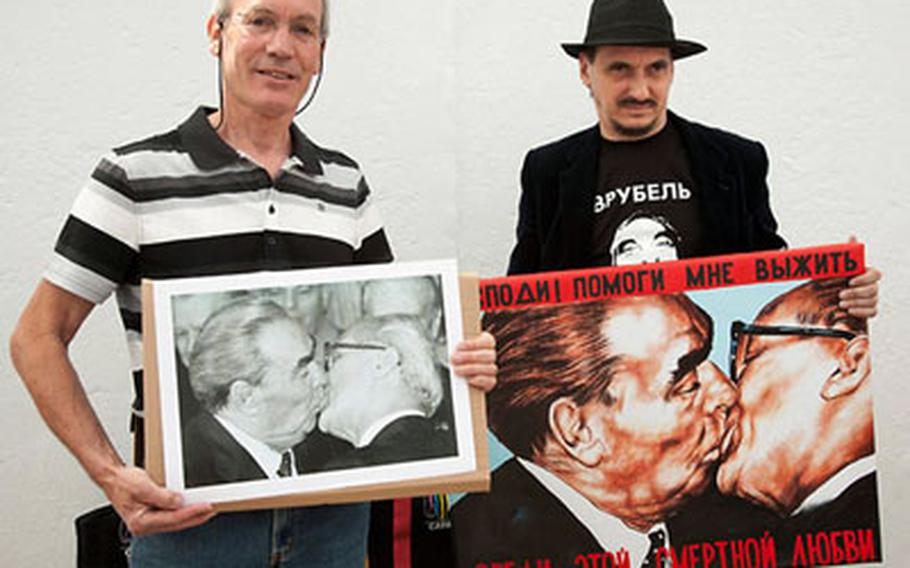 Bossu, left, and Russian artist Dimitri Vrubel meet in in front of the East Side Gallery. Bossu holds a copy of his photo while Vrubel has a copy of the painting based on the photo. () 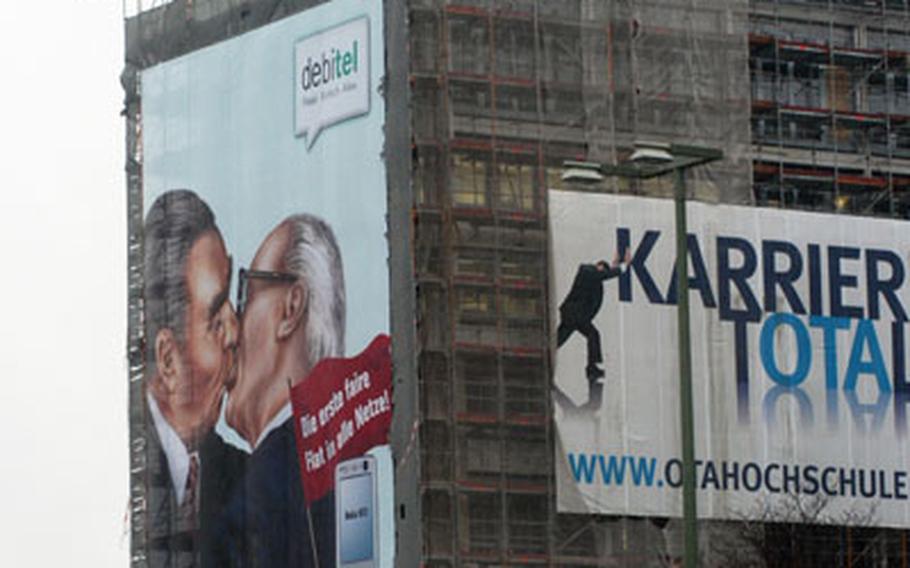 A German telecommunications firm used “The Kiss” in huge posters without permission. Bossu filled a lawsuit and won. ()

The most-popular and oft-photographed mural of the East Side Gallery in Berlin is a close-up of two men kissing.

It is known as "The Kiss" or "Brother Kiss" and was first painted by Russian artist Dimitri Vrubel in 1990. This is the story behind the famous image.

My friend, R&eacute;gis Bossu, is a Frenchman born in Verdun. He has many talents: He can cook and iron like an expert; is an experienced plumber, carpenter and bricklayer; he knows how to handle dogs, drive fast, speak slowly and charm les dames. He looks easygoing, but is tough and determined when working. But mainly, he is a great photographer.

I met R&eacute;gis in 1970 at European Stars and Stripes, where he worked on the photo staff. After four years, he decided to photograph on his own. He shot freelance photos for the German magazines Stern and Spiegel, and signed a contract with the noted French photo agency Sygma.

In 1979, R&eacute;gis was sent to East Berlin to photograph the festivities of the 30th anniversary of the Deutsche Demokratische Republik &mdash; East Germany &mdash; featuring its guest of honor, Soviet leader Leonid Brezhnev, the most powerful man in the Eastern bloc.

When Brezhnev finished his speech, East German President Erich Honnecker opened his arms to congratulate him with a big kiss, a normal ritual for socialist buddies. A dozen photographers opened a fire of flashes. R&eacute;gis, standing in the back row, had his camera equipped with a 80-200 mm telephoto lens. He pressed the shutter release of his Nikon camera at the decisive moment and caught the embrace as a close-up on Kodak Tri-X black-and-white film.

Major magazines used it immediately. Paris Match played it prominently on double pages and labeled it like a painting: "The Kiss."

Eleven years later, Vrubel, saw "The Kiss" in an old Paris Match and used it as a model for his painting on the remains of a section of the Berlin Wall. The already well-known photograph gained celebrity status when Vrubel&rsquo;s painting was repeatedly photographed and published, and the image was copied and printed on T-shirts, towels and other memorabilia. A Berlin hotel, the East-Side Hotel, even took it as its logo.

But only some insiders know the source of the famous image, which Barbara Klemm, the distinguished German photographer, has called "an icon of the 20th century." R&eacute;gis didn&rsquo;t get rich or famous from the photo, although he got, and still gets, a small but steady income from his agency whenever "The Kiss," which has been published more than 500 times, is printed.

This year, 30 years after the photo was shot, R&eacute;gis got some justice from the organizers of the East Side Gallery restoration project. He was invited to Berlin, had an exhibition of his photographs at the East-Side Hotel and finally was introduced to Vrubel.

The German media reported on the unusual meeting between the lean, easygoing Frenchman and the wild, gloomy-looking Russian. They couldn&rsquo;t communicate &mdash; neither spoke the other&rsquo;s language &mdash; but they did pose for photos.

R&eacute;gis hopes the meeting and increased attention will produce one other thing: Whenever the wall painting is restored again, a little credit underneath will say "Painted after a photograph by R&eacute;gis Bossu."