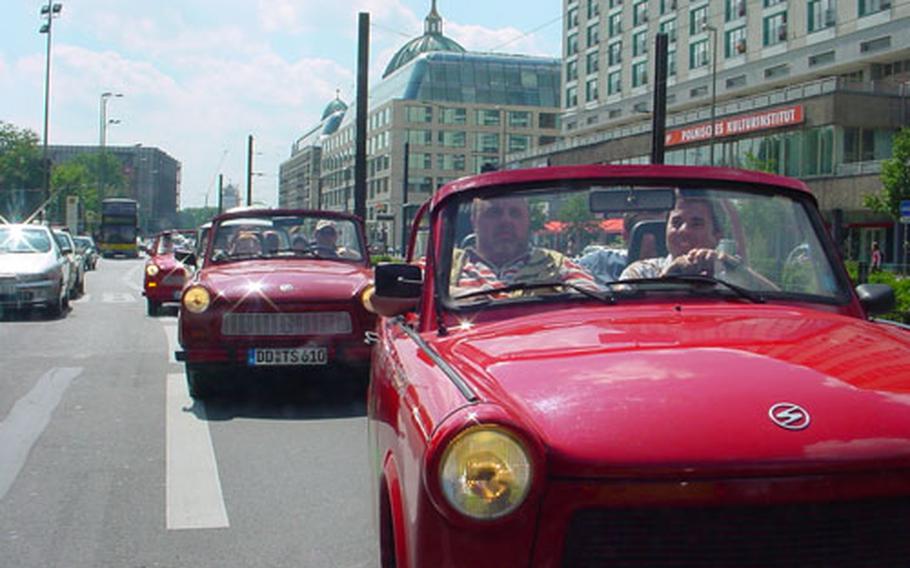 A group of Trabants filled with tourists heads out on a Trabi-Safari through the streets of eastern Berlin. The self-drive tours, coordinated over the cars&#39; radios by a guide, takes participants past sights in the formerly Communist-ruled part of the city. (Alfred Kueppers / S&S)

A group of Trabants filled with tourists heads out on a Trabi-Safari through the streets of eastern Berlin. The self-drive tours, coordinated over the cars&#39; radios by a guide, takes participants past sights in the formerly Communist-ruled part of the city. (Alfred Kueppers / S&S) 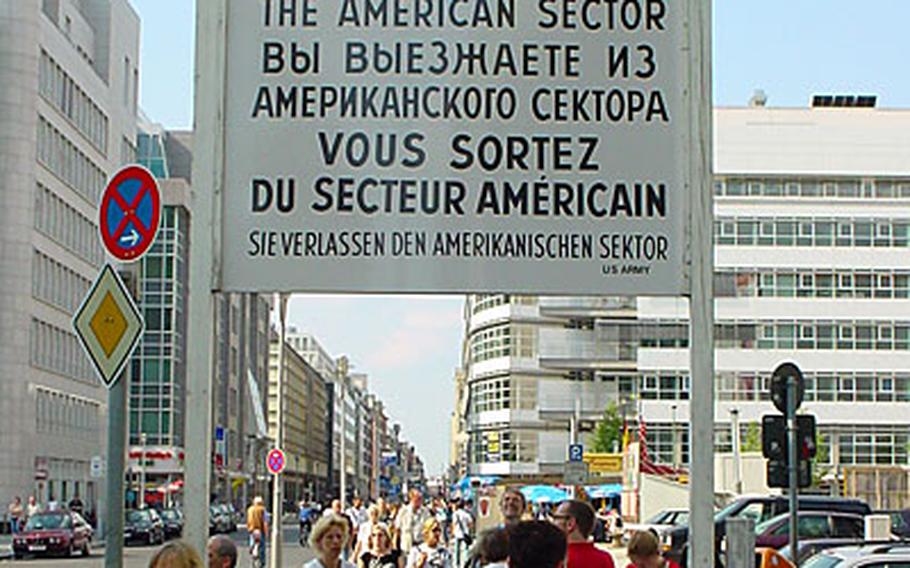 The former Checkpoint Charlie border crossing on Friedrichstrasse is marked by a sign. (Alfred Kueppers / S&S)

Almost two decades ago, I crossed over the Berlin Wall. It was no cinematic cloak-and-dagger escape from the Communist East, but a teenage day trip with my father, a West German citizen.

Still, there was plenty of drama, from the scowling border guard I could barely make out behind the dark glass at the crossing point, to the East German soldiers goose-stepping down a central street of pockmarked buildings scarred with shell and bullet holes from World War II.

Those days are gone. The station at Friedrichstrasse, where I entered Berlin&rsquo;s Soviet zone, is now a subway stop. Developers swooped in shortly after the wall came down and replaced the shelled ruins with glass and steel, Starbucks and Dunkin&rsquo; Donuts.

As a consequence, many Berliners miss the bad times, the dark, romantic world of John Le Carr&eacute;&rsquo;s spy novels &mdash; if only because they are sure they won&rsquo;t return.

&ldquo;I don&rsquo;t want the Cold War back,&rdquo; a German colleague told me. &ldquo;It&rsquo;s just that it all meant something back then &mdash; Reagan, Gorbachev. Now all they ever talk about here is pension reform.&rdquo;

Walking around unified, sanitized Berlin, it is easy to understand where she is coming from.

I will never forget the cheap tar melting on the streets like chewing gum under the summer sun, or the sugary soda pop my father and I shared at a cafe with an East German woman who assured us life was good under the Communists.

A few hours later, back on the west side of the wall, my uncle scoffed. &ldquo;You think you just happened to meet a nice, happy Communist at a cafe?&rdquo; he shook his head at the naivete of his American relatives. &ldquo;Believe me, she was Stasi!&rdquo;

The Stasi were the secret police, who, according to historian David Large, had about 1.5 million full- or part-time informers.

&ldquo;Who knows?&rdquo; we shrugged. But ever since we have wondered if he was right.

On a recent day, visitors in search of this lost Berlin gathered on the 18th-century Gendarmenmarkt square where Rico Heinzig lines up his collection of Trabants, East German cars whose name is German for Sputnik. Each day he sends visitors out on &ldquo;Trabi-Safaris&rdquo; through East Berlin&rsquo;s urban jungle.

The tiny four-seater is a symbol of the failings of Eastern European communism. The Trabi runs on a mixture of oil and gasoline that is converted into clouds of thick blue smoke by its two-cylinder engine. Top speed is 62 mph. Much of the body is made of heated and compressed cotton fiber. Rust, at least, is not a problem.

&ldquo;I wanted to do a tour that really stirs people&rsquo;s emotions and shows them what life was like,&rdquo; Heinzig said. &ldquo;Now I&rsquo;ve found that it brings people closer together. Westerners hear about it and say, &lsquo;OK, let&rsquo;s do it,&rsquo; and after the tour they really understand a little bit more about life on the other side of the wall.&rdquo;

I hop into the lead vehicle of a five-Trabi convoy, and sputter out of the square, once considered one of the most beautiful in Europe. Soon we pass the iconic TV tower and roll into the communist heartland, a time warp of a neighborhood that has remained stubbornly unchanged and off the tourist trail despite its central location.

A bust of Karl Marx welcomes us onto the street named after him. It is lined with eight-story Stalinist &ldquo;wedding cake&rdquo; apartments. It feels like Minsk, Kiev or Moscow. Suddenly, the Cold War is very close at hand.

To my right, a customer emerges from the Karl Marx bookstore. We cross Paris Commune Street and instead of a Starbucks I spot the Ilya Ehrenburg cafe, named for the Soviet propagandist and Pravda correspondent.

We wheeze down Warsaw Street, make a right and drive by one of the few remaining sections of the Berlin Wall. Finally, we hit Checkpoint Charlie, the border point in the heart of the city where Soviet and U.S. tanks once faced off.

After the safari, I take the subway to the former French sector where I experience one of the divided city&rsquo;s darker realities.

I join a crowd of about 30 that has gathered outside an unobtrusive green door near the Gesundbrunnen station. A neon orange- vested guide from the Berlin Underworlds Association arrives and we follow him down stairs for some 25 feet and enter a Cold War-era bomb shelter.

We take turns pumping air from above ground into the hideout, while our guide explains that the municipal authorities provided only enough food and water for two days.

&ldquo;After that, everyone figured the Warsaw Pact armies would have taken control,&rdquo; he says.

Though the Cold War never turned hot, there were plenty of real horrors above ground. One was an unremarkable 14-story gray-and-brown complex that blends unnoticed into the surrounding residential neighborhood of Lichtenberg.

It was the Stasi headquarters. Now a museum and research center, the building has been preserved as it was when the spooks were chased out by a mob of angry East Berliners in 1990.

I walk through room after room of upholstered brown chairs facing brown tables. The curtains are always drawn.

Every once in a while, something strange and shocking juts out from the darkened rooms. A ghostly white death-mask of Lenin lies under a glass case on the Stasi director&rsquo;s desk. &ldquo;Scent jars,&rdquo; small glass bottles with scraps of cloth torn from dissidents, are displayed one floor down. If the dissidents tried to escape, the theory went, dogs could pick up the smell from the jars and hunt them down.

Finally, I ride the subway back to Alexanderplatz, where the TV tower becomes the last stop on my tour. A high-speed elevator shoots me up 670 feet in just 40 seconds.

From this height, the city appears much as it did during the Cold War. I even think I can make out a line of Trabis far below, inching their way through the streets of East Berlin.

It&rsquo;s probably just the Trabi- Safari, but it could just as easily be Berliners lost in another time.

Alfred Kueppers is a journalist based in Frankfurt, Germany. E-mail him at akuep1@yahoo.com.

&bull; Customers on Trabi-Safaris drive themselves, receiving information from guides over the radio. Tours, about 90 minutes long, can accommodate groups of up to 16 and cost 25 euros per person.

Tours in English are available if arranged in advance.

&bull; Berlin Underworlds&rsquo; Association offers four tours, each costing 9 euros per person. English-language tours must have a minimum of five participants; they are available Wednesday through Friday between April and October, and by reservations the rest of the year.

For more information, see the Web site www.berliner- unterwelten.de; it has an English version. You can also get details by e-mailing vorstand@ berliner-unterwelten.de, or calling (+49) (0) 30-4991-0517.