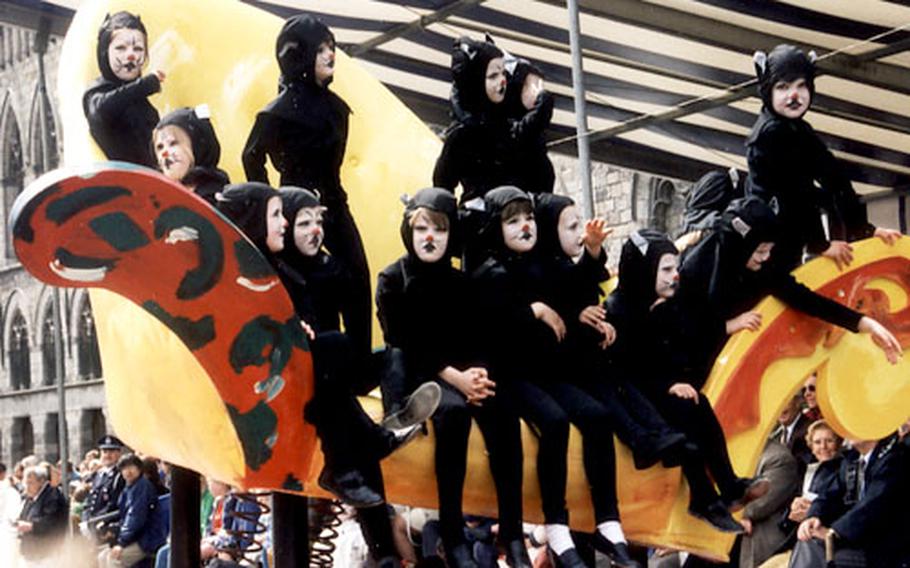 “Kittens” (children dressed as cats) ride through the streets of Ypres, Belgium, during a past Cat Parade. (Jayne Traendly / Special to S&S)

“Kittens” (children dressed as cats) ride through the streets of Ypres, Belgium, during a past Cat Parade. (Jayne Traendly / Special to S&S) 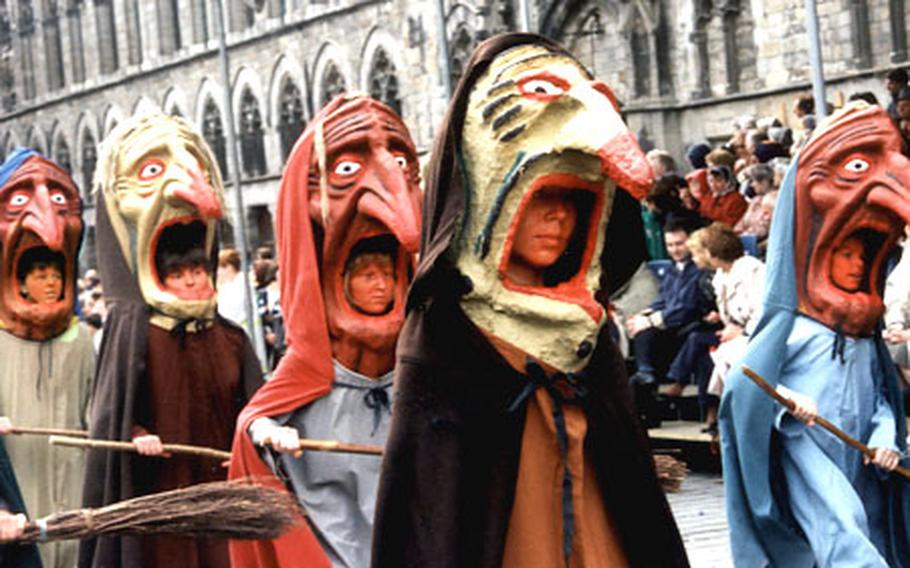 Medieval witches, also part of Ypres’ folklore, will march in this year’s parade on May 14. (Jayne Traendly / Special to S&S) 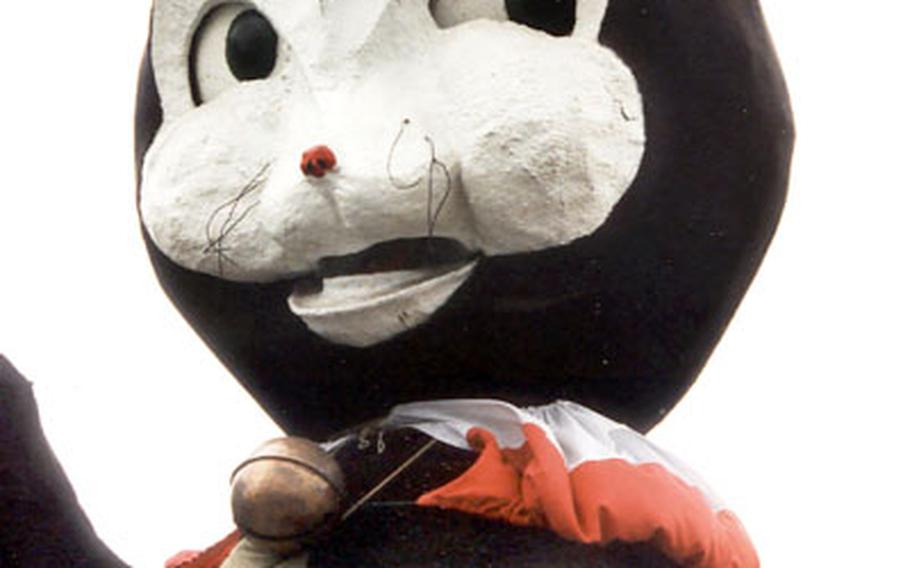 Cieper, king of the cats, marches every year in the parade. He is usually joined by his wife, Minneke Poes, and their kitten, Piepertje. (Jayne Traendly / Special to S&S)

Hissssss! Be warned. Another element has been added to this year&#8217;s Cat Parade in Ypers, Belgium: a 130-yard-long cage of wild cats.

Every three years since 1955, the residents of this Belgian town have celebrated the cat by transforming themselves into human-sized felines for a festival weekend that includes art, music, folklore activities and the parade. But it&#8217;s a wonder Ypres&#8217; cats haven&#8217;t let loose with this wild side before, considering their tragic history in Belgium.

The story didn&#8217;t begin so grim. In fact, legend has it that in pagan times, a giant statue of a cat god stood where the Cloth Hall in the town center now is located. But this cat adoration turned to fear when the locals converted to Christianity and the once-honored figure was transformed into a symbol of the devil.

It was all downhill after that. Throughout the Middle Ages in Europe, the cat was associated with witches and demons, suffering a list of atrocities too numerous to mention. And Ypres&#8217; populace was no kinder.

The town&#8217;s history records show that a cat festival was celebrated in the 15th century, closely related to the Ash Wednesday fair. But this event was no fun for felines. The highlight involved the town jester hurling live animals out of high towers, an act that symbolized the exorcism of demons. At some point, this tossing was officially transferred to the Cloth Tower belfry.

Unfortunately, this flinging of felines lasted for centuries. It wasn&#8217;t until 1817, according to a 19th-century Ypres archivist, that the last cats were thrown and the pitiless practice was banned.

Since its earlier days, the cat parade has grown, this year so much that part of it will be on Saturday, May 13, starting at 8:30 p.m. This shorter spectacle will feature the sections about the city&#8217;s history and the witch trials.

On Sunday at 3 p.m., the cats break loose for the grand procession. The wild cats join the traditional cast of cat characters: Cieper, wife Minneke Poes and their kitten, Piepertje, towering above the crowd. Exotic Egyptian cats ride in painted boats carrying Egyptian worshippers to the cat sanctuary in the town of Bubastis. Giant wild cats draw the German goddess Freya in her heavenly carriage. Black cats curl around their witch companions.

Cats from the musical &#8220;Cats&#8221; dance along the route. Other felines march in formation and ride horses in a cat cavalry, hiss and spring into the crowd and schmooze with the audience. Litters of kittens prance among the adults.

At the end, the jester arrives on his float in a flurry of confetti to ascend the steps of the Cloth Hall&#8217;s 230-foot belfry and carry out the traditional tossing of the cats &#8212; using plush animals. In former years, these toys were filled with money, but the practice was discontinued when the fights among the scrambling crowds got too wild.

&#8220;Humans call this fighting wild?&#8221; the Ypres cats must have said in disbelief. No ears back? No snarls? No extended claws?

Jayne Traendly is a regular contributor to Stripes&#8217; Travel columns and a freelance writer living in Germany.

Know and go ...The feline fun runs the entire weekend.

On May 13, beginning at 2 p.m., children can join a mouse treasure hunt along the city ramparts. Information is in the Cloth Hall. In the evening, the first parade begins at 8:30.

On May 14, the parade begins at 3 p.m. It&#8217;s best to arrive early, however, not only to get a closer parking spot but also to enjoy the atmosphere, which includes listening to folklore music, drinking Belgian beer, getting your face painted like a cat&#8217;s and buying cat souvenirs.