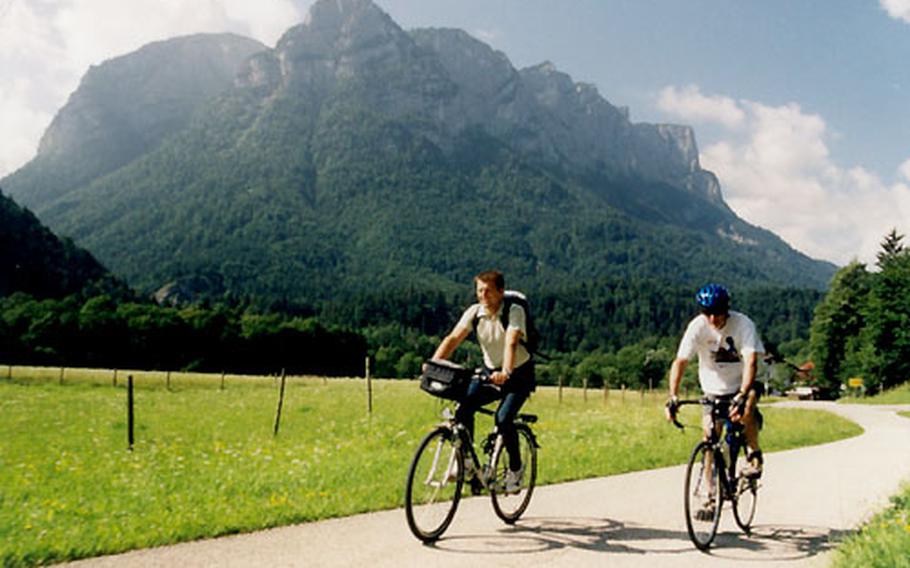 Pedaling into Bad Reichenhall is smooth sailing on a flat path with the mountains in the background. (Leah Larkin / Special to S&S)

Pedaling into Bad Reichenhall is smooth sailing on a flat path with the mountains in the background. (Leah Larkin / Special to S&S) An extension loop of the Mozart Radweg leads to St. Gilgen with its picturesque Rathaus or town hall. From the town there are boat excursions on the beautiful mountain lake, the Wolfgangsee. (Leah Larkin / Special to S&S) 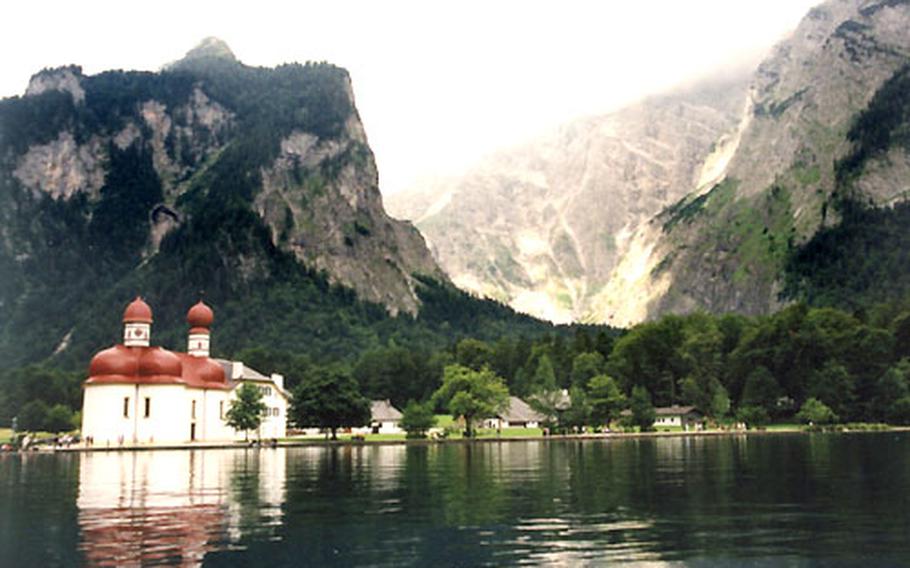 Boat trips on the Königsee make a stop at St. Bartholomä with its onion-domed church. (Leah Larkin / Special to S&S) 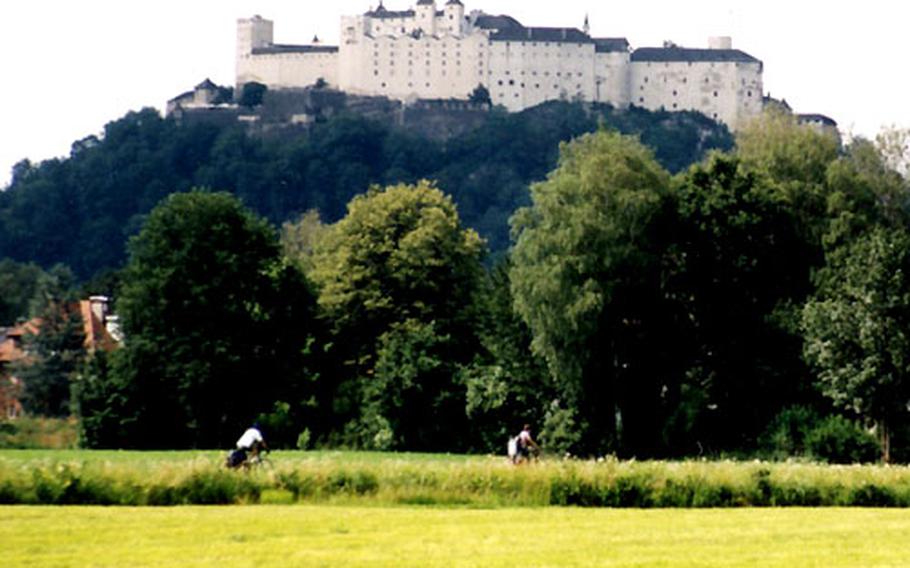 The route ends back in Salzburg with cycling beneath the Hohensalzburg fortress, which dominates the city. (Leah Larkin / Special to S&S) It&rsquo;s time to put the skis away and haul out the bikes. Europe is splendid for pedaling, as my husband, Bicycle Bob, a cycling fanatic, and I have discovered. We love taking the marked bike routes in Germany, Switzerland and Austria, setting out with our gear for jaunts of several days.

Last summer we cycled parts of the Mozart Radweg, or bike route, for 4&frac12; days, visiting two countries, Austria and Germany. The route, which opened last May, leads past places prominent in the composer&rsquo;s life. The entire route, beginning and ending in Salzburg, is about 250 miles long. Due to rain and lack of time, we biked about half of it.

The scenery &mdash; mountains, lakes and undulating valleys &mdash; is stunning. We especially enjoyed visits to Salzburg and the town of St. Gilgen on the Wolfgangsee in Austria, and, in Germany, the Seeon monastery, Bad Reichenhall, Berchtesgaden and a boat trip on the K&ouml;nigsee.

The route is well marked with &ldquo;Mozart Radweg&rdquo; signs, although there were a few times when we came to intersections and had to guess or ask directions. We used the bikeline series &ldquo;Mozart-Radweg&rdquo; guidebook. Its strip maps are invaluable, as are the symbols on the maps indicating elevation change.

The route goes on bike paths for the most part. There is one nasty section on a heavily trafficked road leading up a long hill and down into the town of St. Gilgen, but most of the roads on the route have few cars. Long stretches of pleasant, flat pedaling along rivers and lakes and through lush fields and pretty towns are interspersed with some hilly treks. However, we found nothing to be super strenuous.

Before setting out from Salzburg, where we left our car, we visited two Mozart highlights: the site of his birth and where he lived.

The latter is fascinating. Headsets are provided so you can listen to famous operas and minuets. Musical instruments, musical scores, family portraits and a map of Mozart&rsquo;s travels are on display. Mozart spent one-third of his 35 years on the road. At the huge map, you can press buttons to learn more about trips he took. The museum/house visit winds up with a wonderful film on his life, which includes an English- language soundtrack.

Mozart&rsquo;s birth house provides an idea of what life was like in his day. It&rsquo;s fun to wander through. The old kitchen is especially interesting.

Had there been more time, we might have taken Fr&auml;ulein Maria&rsquo;s Bicycle Tour, which visits the main locations from &ldquo;The Sound of Music.&rdquo; But no doubt Mozart would have been insulted had we given Julie Andrews equal time, so we got on the bikes and pedaled out of town along the Salzach River. Our destination was St. Gilgen, some 29 miles away on a loop off the main route.

We left the river and headed through green fields with mountains in the background and villages with onion-domed churches. It was cloudy when we left Salzburg, and soon the rain started. The light morning drizzle turned into an afternoon downpour. We had to reach St. Gilgen that night, and the last two miles were the worst part of the entire trip &mdash; cycling up a long hill on a busy road with monster trucks roaring by, their spray adding to the water falling from the sky.

We arrived in St. Gilgen drenched and distraught. The friendly woman who runs the Haus Schernthaner, where we stayed, gave us a warm welcome and refreshments, lifting our spirits.

By evening the rains had let up so we could walk around this picturesque burg. The flower- decked waterfront is a gem. Boat trips around the Wolfgangsee, an idyllic mountain lake, depart from St. Gilgen.

The next morning we made a quick visit to the house where Mozart&rsquo;s mother was born and learned that she had seven children. Only two survived &mdash; Mozart and his beloved sister, &ldquo;Nannerl,&rdquo; who was also a child prodigy and gifted pianist overshadowed by her brother. When Nannerl married, she moved into the same St. Gilgen house where her mother was born.

Unfortunately the rains had returned. We were not anxious to pedal back uphill out of town on that terrible road in the rain. We did some research and learned we could take our bikes on a bus back to Salzburg. This cut out much of the loop that allowed us to visit St. Gilgen, but we&rsquo;d had enough rain.

Back in Salzburg, we hung out at the rail station, waiting for the rain to stop. It never did, but we decided we could pedal north to Anthering, where we had reservations at the Hotel im Wald Hammerschmiede. The welcoming crew at this delightful hideout in the woods &mdash; peacocks, geese, rabbits, chickens and cats &mdash; made us forget the rain.

The trek to Anthering was a mere eight miles, but that was enough in the rain. We spent the rest of the day lounging at the hotel, resting and hoping for sunshine the next day.

We were blessed. There was no rain on Day 3 when we pedaled into Germany and rode 54 miles. More pretty scenery. Some hills. And frustration in the town of Waging, where we had lunch. We couldn&rsquo;t find our way out. We even encountered other lost cyclists who asked us directions. Finally, a Dutch woman on a bike who was staying at a nearby campsite set us back on course.

We biked along the lake, Chiemsee, stopping at the town of Chieming for an ice cream break on the beach. This was a crowded area with lots of bikers and pedestrians on the path bordering the lake. There was also one frantic little girl who asked us if we had seen her goats. She explained that her two new, &ldquo;very expensive&rdquo; goats had gotten loose. We looked for them, without success, as we continued on our route.

The monastery at Seeon was our destination that day. It is on a mini island on a tiny lake, the Kloster See, near Chiemsee. After a long day&rsquo;s ride, it was delightful to sit in the late afternoon sun on the terrace above the water and indulge in our favorite after-bike treat, a cold beer.

Mozart spent time at the Seeon monastery, composing and playing the piano. His family is said to have enjoyed the beer, for which the monastery is famous.

Because we did not have enough time to ride the entire Mozart Radweg, we arranged transportation to Schneizlreuth on the southern portion of the route loop for our bikes and us. This put us back along the Salzach River, which we followed to Bad Reichenhall, a lovely spa town where we took time out for some sightseeing.

We rode &mdash; without bikes &mdash; a 75-year-old cable car to the top of a mountain for some spectacular views. We pedaled through the town&rsquo;s pedestrian zone, through its beautiful park to the Jugendstil Kur house with its amazing open-air inhalatorium: a 568-foot long, 46-foot high wall composed of 90,000 bundles of blackhorn and hawthorn twigs. Salty water from the mountains runs over the wall of branches emitting fumes, which are said to be healthy to inhale.

Mozart visited Bad Reichenhall, a city that has a passion for music and stages a Mozart Week every March with performances of some of the composer&rsquo;s best works. We did not have time for any Mozart music, but we did visit the city&rsquo;s Mozart caf&eacute;/konditorei all decked out with displays of Mozart Kugeln. These are the famous candy made of chocolate, marzipan and nougat.

The candy was invented in Austria, and the Austrians claim they make the best, with the Bad Reichenhall company Reber saying its is the tops. Since we&rsquo;re not fans of marzipan, we could not judge.

Berchtesgaden was our next stop, but it was not easy getting there. The bike route took us through a forest on an uphill path of stones, terrain better suited to mountain bikes. With our hybrid bikes, it was too tough. We got off and pushed. When we finally left the woods, we met a couple on bikers poring over instructions. They asked if we spoke English. They were British, 74 years old, and on their fifth bike tour of Bavaria with a British company. We compared maps and set off in the same direction. Fortunately, it was in the right direction.

In Berchtesgaden we enjoyed a fun Bavarian evening, dining outside to the sounds of a nearby oompah band. There&rsquo;s a lot to do near Berchtesgaden &mdash; visit the salt mines, Adolf Hitler&rsquo;s Eagle&rsquo;s Nest, the K&ouml;nigsee, hike in the mountains and more.

We opted for a boat ride on the beautiful lake, the K&ouml;nigsee, surrounded by sheer walls of rock and mountain peaks. There are no powerboats on the lake, so it&rsquo;s serene, peaceful and totally relaxing in a magnificent setting.

We then pedaled back into Austria and on to Salzburg. As we neared the town, we became confused by signs for many bike routes. A friendly local saw us stopped at an intersection consulting our book. She asked if she could help. She was going in the same direction, so she told us to follow her. She seemed delighted to speak English, and as we rode she told us about her relatives in the States.

But it was what we saw and learned about Mozart&rsquo;s surroundings that interested us the most.

&ldquo;We put all the important Mozart points on the map and decided to make a Radweg,&rdquo; said Oswald Pehel of Chiemgau Tourismus, a national tourist company tht operates in the region. &ldquo;There's a lot of interest in this mix of culture and scenery.&rdquo;

We found it a great mix, and plan to go back and pedal the section we missed soon.

You can order the Mozart Radweg bikeline book from bookstores on the economy, or through its Web site: http://www.esterbauer.com/. Click on &ldquo;Radtouren-b&uuml;cher&rdquo; for a list of available books, then &ldquo;Kontakt&rdquo; to order online