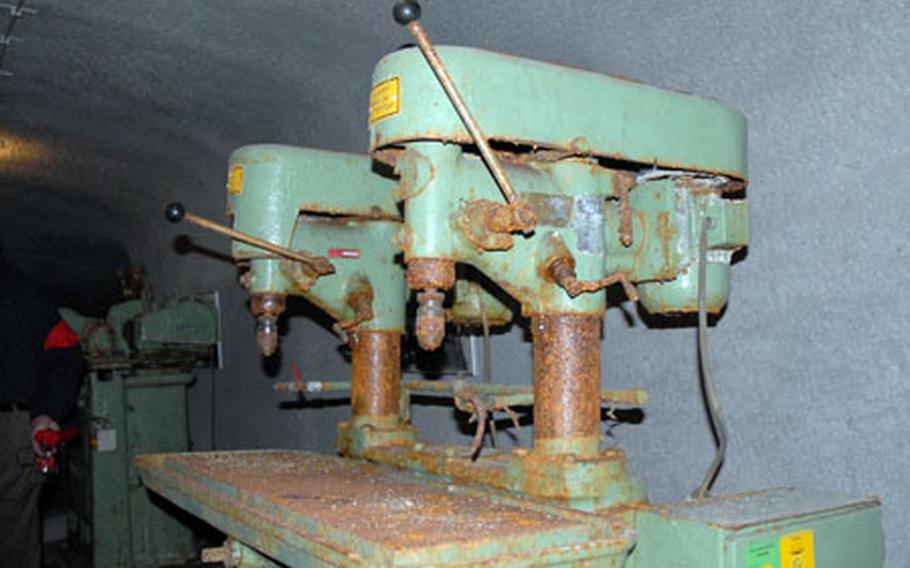 Machinery such as this drill press was used during World War II in the tunnels under Bamberg. Thousands of German workers pulled 24-hour shifts, coming and going only at midnight, all throughout the war, manufacturing things such as spark plugs and electronic parts for companies such as Bosch. (Mark St.Clair / S&S)

Machinery such as this drill press was used during World War II in the tunnels under Bamberg. Thousands of German workers pulled 24-hour shifts, coming and going only at midnight, all throughout the war, manufacturing things such as spark plugs and electronic parts for companies such as Bosch. (Mark St.Clair / S&S) 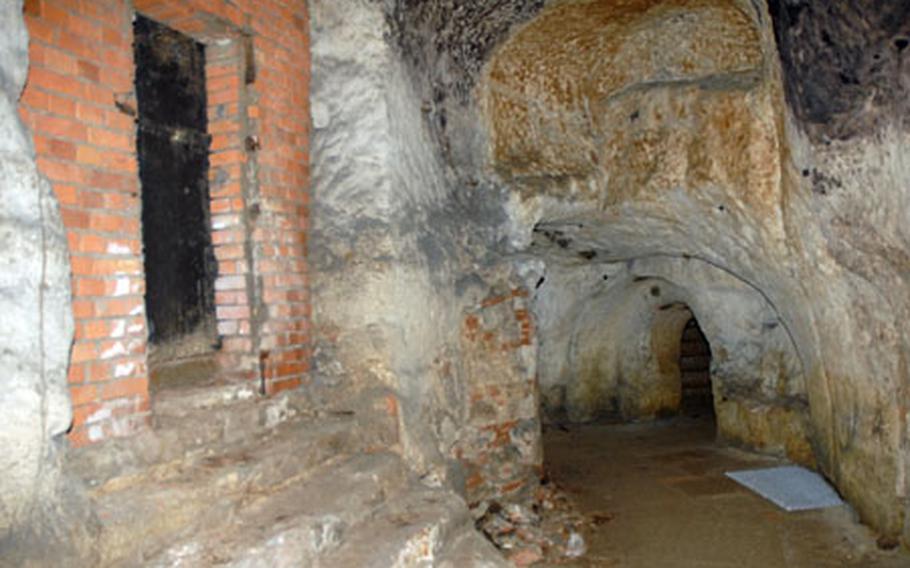 The modern brickwork on the left lies in stark contrast to the nearly 1,000-year-old chisel marks in the sandstone ceiling on the right in this small portion of the 7 1/2 miles of tunnels under the city of Bamberg. (Mark St.Clair / S&S) 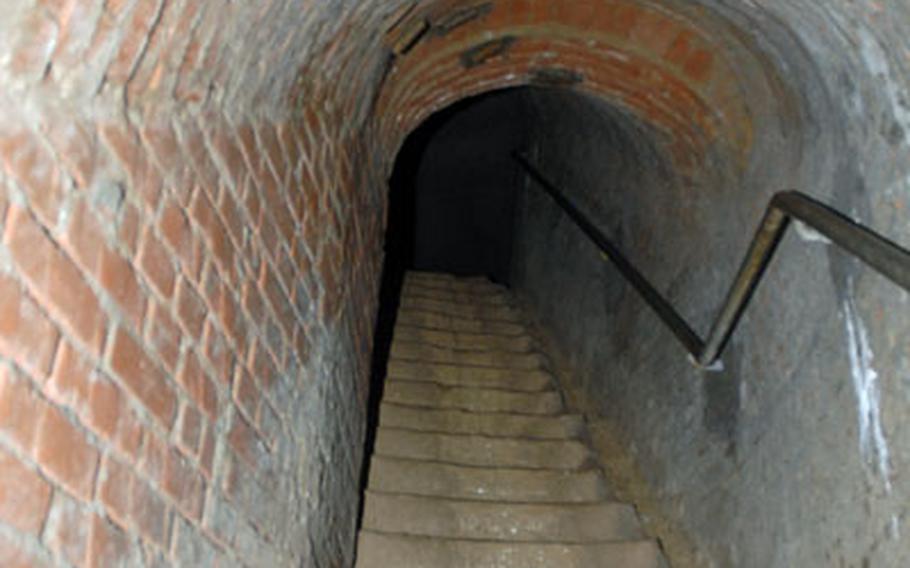 While taking the Tour Under Bamberg, you&#39;ll go down these stairs all the way to river level. Built out of brick instead of the usual sandstone, the entrance into the tunnels was made during World War II for the thousands of workers pulling 24-hour shifts underground. (Mark St.Clair / S&S) 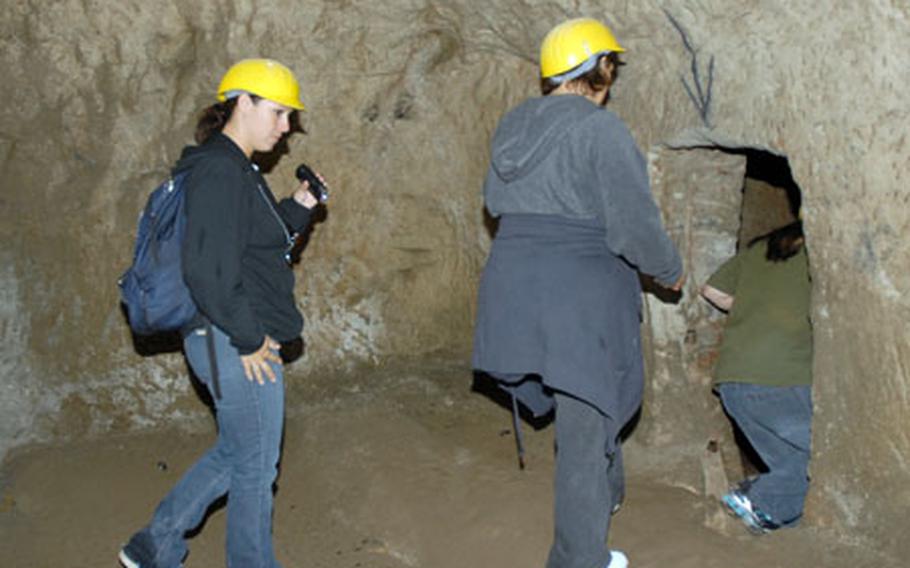 Members of the Bamberg military community squeeze through a small opening while on a tour of the sandstone tunnels underneath the city. (Mark St.Clair / S&S)

For nearly 1,000 years they used pickaxes and shovels, digging deep into the hills around the city, helping to fill the city coffers one sandstone-filled backpack at a time.

The soft rock they removed was used for building and in an abrasive cleaner for floors, tables and fabrics before modern detergent. It helped pay for many of the beautiful buildings and unique treasures Bamberg has to offer. It also explains why the word &ldquo;sand&rdquo; is found in the names of many things in the city.

Once the digging stopped in 1920, about 7 1/2 miles of tunnels wound under six of Bamberg&rsquo;s seven hills. Today, about 1 1/2 miles of those tunnels &mdash; called Die Katakomben by the locals &mdash; are open for guided tours.

Visitors can enter the tunnels through the side of Stefansberg Hill. Armed with a flashlight, hard hat and the willingness to get a little dirty, the curious can see chisel marks more than four times older than the United States, breathe air so healthy it could be used for an asthma rehabilitation center and experience what the term &ldquo;pitch black&rdquo; really means in areas nearly 90 feet underground.

Near the beginning of the tour, large machinery is on display, much like the type used in World War II. Then thousands of Germans pulled 24-hour shifts underground, entering and exiting at midnight and manufacturing spark plugs and other electrical parts for companies like Bosch.

Nearby, there&rsquo;s a small cross placed in remembrance of workers killed when a bomb collapsed a portion of the tunnels in 1945. Bamberg made it through the war relatively unscathed, partially because the items being made were not used for weaponry.

During the war, the tunnels were used as an air raid shelter and could hold 20,000 people. If a disaster occurred today, more than 40,000 could seek safety underground.

About halfway through the tour, a 350-year-old beer barrel serves as an example of the hundreds once stored there. In the 16th century, there were 65 active breweries in Bamberg, and though there are only 10 today, it&rsquo;s still the largest concentration of breweries in the world.

Giant blocks of ice were hauled from the river in winter and dropped through holes in the ceilings. The tunnels had a constant 46-degree temperature, which meant the ice melted slowly enough to keep the beer cool through the summers before modern refrigeration.

Also near the midpoint of the tour is a small chapel, where workers would pray to St. Barbara, the patron saint of miners.

One portion of the tour goes down more than 60 narrow brick steps, all the way to river level. On the wall near the end of that branch of tunnels is a carving saying, Gluck Auf &rsquo;83 &mdash; &ldquo;Good luck in &rsquo;83.&rdquo;

It was put there for luck when repair work on portions of the tunnels began in 1983. Spraying liquid cement on the ceilings, workers used reinforced steel and iron to strengthen the tunnels. The walls and arches are checked regularly to see if they need further reinforcement. The methods used to repair the tunnels are now used when tunnels are made.

Near the end of the tour, which is also near the beginning, there&rsquo;s a small area with tables and benches that can be rented from the city for private functions.

Those who decide to do so should make sure none of the guests gets lost. It gets pretty dark down there.

On the QTDirections:The entrance to the tunnels is about a 15-minute drive from Warner Barracks. From the main gate, turn left onto Berliner Ring and then right onto B22 (W&uuml;rzburgerstrasse). After crossing the river, take the first exit (if you see the exit for Altenburg, you&rsquo;ve gone too far) and follow the priority road. Turn right onto Sternwartstrasse. The tunnel entrance, unmarked, is just down the hill from Heller Brewery.

Times:Tours with the Morale, Welfare and Recreation center on Warner usually leave at about 4:30 p.m. and return at about 7 p.m. Since all other tours are by appointment, times will vary.

Costs:The MWR-sponsored Tour Under Bamberg costs $20 per person. Scheduling your own tour costs a flat 80 euros for one to 25 people.

Food:Downtown Bamberg, with dozens of great restaurants and cafes, is a short distance from the tour entrance. Also, one of Bamberg&rsquo;s 10 active breweries, Heller, lies just up the street.

Information:For more on the Tour Under Bamberg, call the Warner Barracks MWR at 0951-300-8659 or DSN 469-8659, or call Manfred M&uuml;ller at 0951-493-00 to schedule your own tour. Take a flashlight and wear clothes and shoes that are warm and can take mild abuse. Strollers would not be appropriate, but there is no age restriction for children.