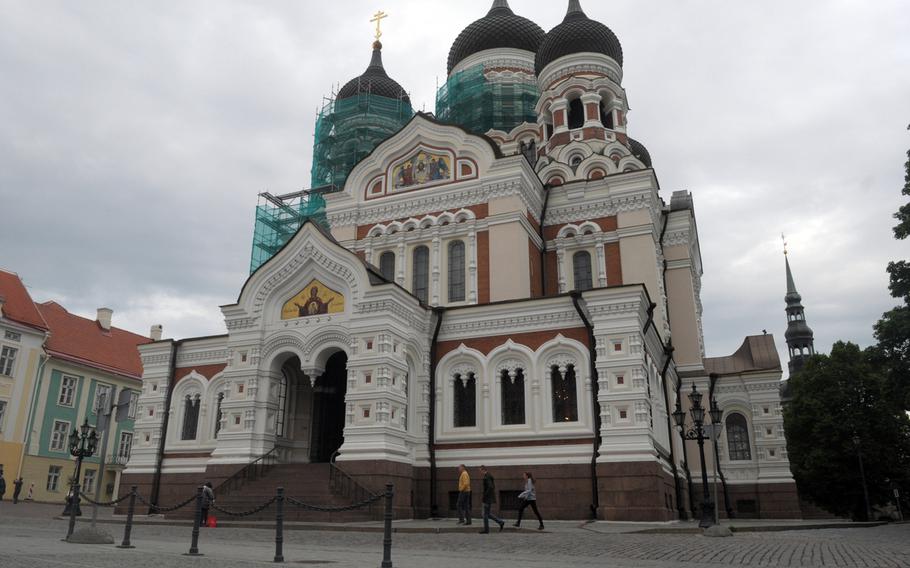 Completed in 1935, the Freedom Monument in downtown Riga commemorates the Latvian War of Independence but took on new significance after the country was absorbed by the Soviet Union during World War II. (Steven Beardsley/Stars and Strip)

Hands down the best elk meat I’ve eaten was in the small Baltic city of Tallinn, Estonia, at a restaurant where the butcher block tabletops and industrial lighting recalled eateries in London or Amsterdam.

But then, it was the only elk meat I’ve ever eaten.

Tallinn and the Baltic capitals north of Poland proudly embrace a European modernism while holding onto their cultural traditions. The rest of Europe is embracing them right back, with tourism cash flowing into shops and restaurants like the one that served the tasty elk meat, in Tallinn’s medieval old town.

Many American visitors to Europe pull up well short of the Baltic states, going no farther than Krakow, Prague or Budapest. Yet the history and setting of cities like Tallinn and Riga, Latvia, and their tourist-friendly prices, offer ample reason for a visit, especially for U.S. servicemembers stationed in Europe.

Estonia is the farthest north of the three Baltic countries, and with only 1.2 million residents, the smallest. Its president, Toomas Henrick Ilves, is a tweedy former professor from the U.S. (he renounced his citizenship to take office in Estonia). The country is also the most wired in Europe, with high connectivity rates and free Wi-Fi emanating from dozens of hot spots across Tallinn.

Tallinn’s medieval old town is one of the most compact and complete in Europe. Stone turrets and green gothic spires rise above the surrounding buildings, and portions of the old city wall remain in place. Its origins begin with Danish conquest in the 13th century followed by a German order that fostered the city’s merchant class and established the city as a trading power.

In its medieval glory days, Tallinn was part of the Hanseatic League, a confederation of trading ports along the Baltic Sea and northern Europe influential enough to raise its own army. Trade would later fall and the city would be caught between warring neighbors like Sweden and Russia. Russian influence would last through the 20th century, when Estonia was absorbed by the Soviet Union.

Tallinn’s town hall is a testament to its medieval success. Finished in the 14th century, when regional trade was at its height, the building once hosted the town council that dictated administration of the city and its trade. Today, visitors can pay 3 euros to climb the narrow bell tower and get a good overlook of the city.

A few minutes’ walk from the square is the Alexander Nevsky Cathedral, an Eastern Orthodox church completed in 1900. Its ornate, flawless exterior gives way to a rich, incense-filled interior busy with worship. Women place candles in silver holders before the icons and touch their foreheads to the religious paintings. Priests intone the liturgy. The golden wall of icons shimmers.

Across from the cathedral is Toompea Castle, former home of the German order that oversaw Tallinn and now the parliament. Just up the hill is St. Mary’s Cathedral and the best overlook of the old town, the Kohtuotsa platform, just off Toom-Rüütli.

On the way down, consider stopping in one of the old town’s artisan shops to buy a wooden spoon, carved from juniper or black ash from Estonia’s forests, or a woolen hat, made from its sheep. Just off the town hall square, the Adamson-Eric museum offers a good look at modern Estonian art.

For evening drinks, the pub Hell Hunt is among the most popular in the city. A lively, talky atmosphere found on Pikk Street just north of the main square, it offers a good range of beers and no-pretensions setting.

Riga’s old town is much bigger than Tallinn’s, and while it lacks its intimacy and medieval character, it is notably greener and just as walkable. It also offers more to choose from in restaurants and shops.

Once a flourishing port for the Hanseatic League, Riga was later absorbed by a Polish kingdom on the rise in the 16th century before being dominated by Sweden and finally Russia. Like Tallinn, it still claims a sizable Russian-speaking population.

Brivibas Bulvaris. Completed in 1935, the tall stone column commemorates the Latvian War of Independence but took on new significance after the country was annexed by the Soviet Union in 1940. At a time when many other nationalistic monuments were dismantled by the Soviets, the Latvian monument was preserved, and it became a rallying point in the late 1980s as the giant empire flagged.

Just west of the monument is the beautiful park Bastion Hill, which follows a small river sometimes drifted by manpowered rafts. Walking paths crisscross the leafy area, and a tree-shaded observation platform at the top of the hill offers a good point to enjoy the moment.

The old town unfolds at the bottom of the hill. Its highlights include the old military barracks and the nearby war museum; the Three Brothers — side-by-side homes that are the oldest still standing in the city — dating from the 15th century; and the massive Riga Cathedral, whose cornerstone was placed on the ground 800 years ago.

Perhaps the most iconic building in Riga is the House of Blackheads, a re-creation of a 14th-century meeting space and merchants association headquarters. Constructed of bright red bricks and ornamented with statuary, gothic columns and brassy weathervanes, the current version was built in 1999 after the original was destroyed during World War II. Written on its exterior is a demand of future residents: “Should I ever crumble to dust, rebuild my walls you must.”

Nearby is the Museum of the Occupation, which details the 51-year Soviet occupation of the country, which began before World War II. Latvia’s conflicted feelings toward that era are visible in the Soviet-era Latvian Riflemen Monument near the museum, dedicated to a formation that fought with the Bolsheviks in the Russian Civil War. While it’s a symbol of pride to some, many others believe it should be removed.

Finally, while navigating the city’s historic buildings, keep your eyes to the tops of towers and church spires. Riga’s old town churches are topped with golden roosters, a tradition meant to ward off evil. Meanwhile, a small statue of a cat perched on the turreted window of a house at 10 Meistaru iela in the old town is another city icon.

While Tallinn and Riga are only two small parts of a much larger, richer region, they are proper introductions to an area often overlooked by American tourists in Europe.

• Getting there: Major airlines, including Lufthansa, Turkish Airlines and Finnair fly into Riga, Latvia, and Tallinn, Estonia. Discount airlines such as Ryanair also fly into both airports.

• Accommodations: Both cities have an assortment of low-cost and higher-end accommodations.

• Food: In Tallinn, try Rataskaevu 16, named for its address. The wait staff is friendly, the prices very good and the food excellent and fresh. The roast elk was terrific, served with sautéed carrots, berries and thyme sprigs. In Riga, check out Province, on Kalku iela. It had a pretty good cabbage soup, with pork, carrot and dill and served with a spoon of sour cream.

• More information: Tallinn’s website, www.tourism.tallinn.ee/eng, has tips on cultural events and offers an interactive map of the city’s neighborhoods. A Riga website, www.liveriga.com/en, gives visitors suggestions for dining out, what souvenirs to buy and currently features “10 Reasons to visit Riga.”