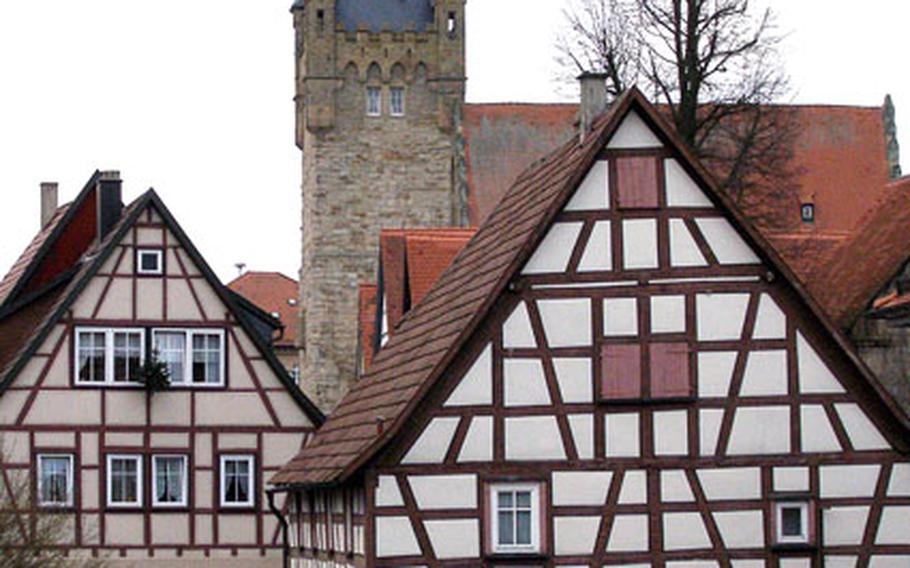 Half-timbered houses ring Bad Wimpfen&#39;s Blauer Turm, or Blue Tower, the town&#39;s landmark. Built around 1200, it is about 192 feet tall and has 167 steps leading to a platform with a view of the town and the Neckar River valley. (Michael Abrams / S&S)

Half-timbered houses ring Bad Wimpfen&#39;s Blauer Turm, or Blue Tower, the town&#39;s landmark. Built around 1200, it is about 192 feet tall and has 167 steps leading to a platform with a view of the town and the Neckar River valley. (Michael Abrams / S&S) 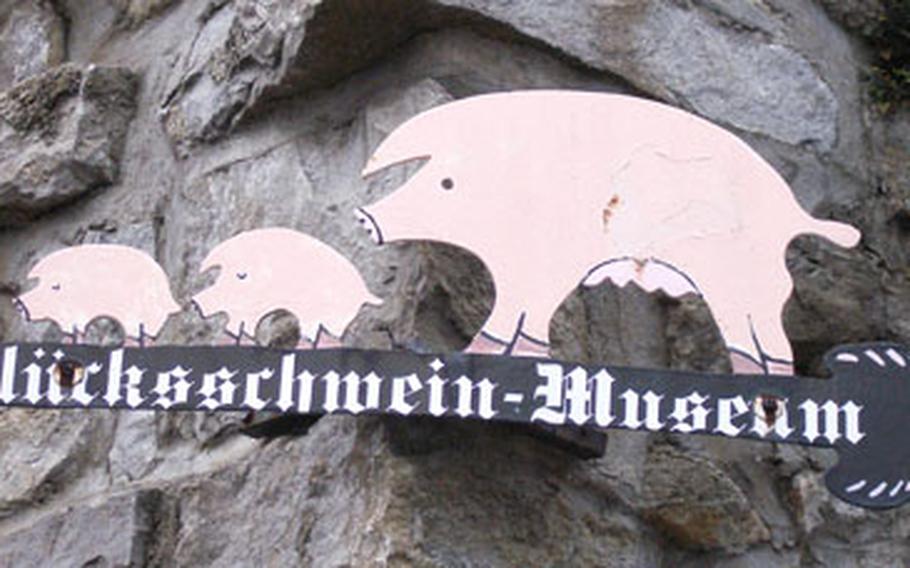 When visiting Bad Wimpfen, follow signs like this to the Lucky Pig Museum, a museum dedicated to, as the name says, pigs. (Michael Abrams / S&S) 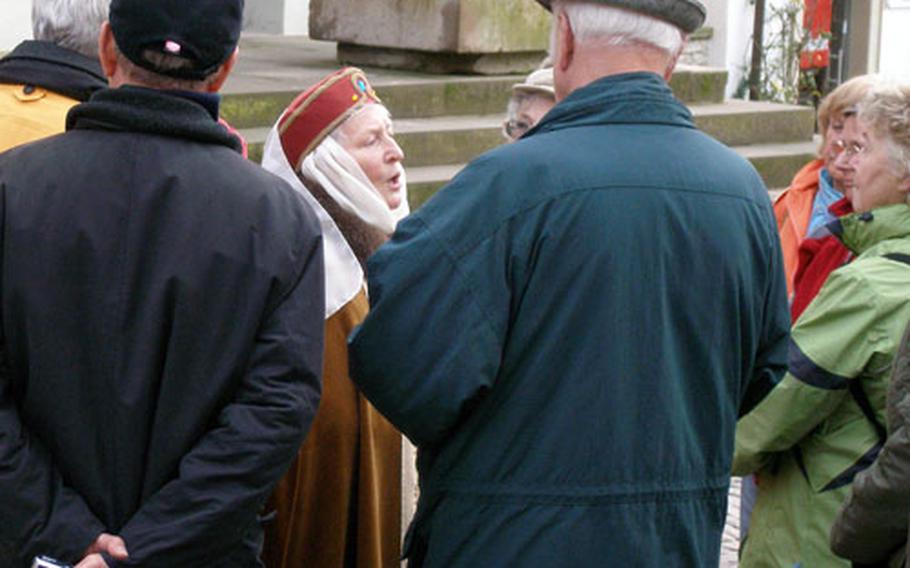 Dressed in traditional garb, a guide leads a tour through the old imperial city of Bad Wimpfen. (Michael Abrams / S&S) 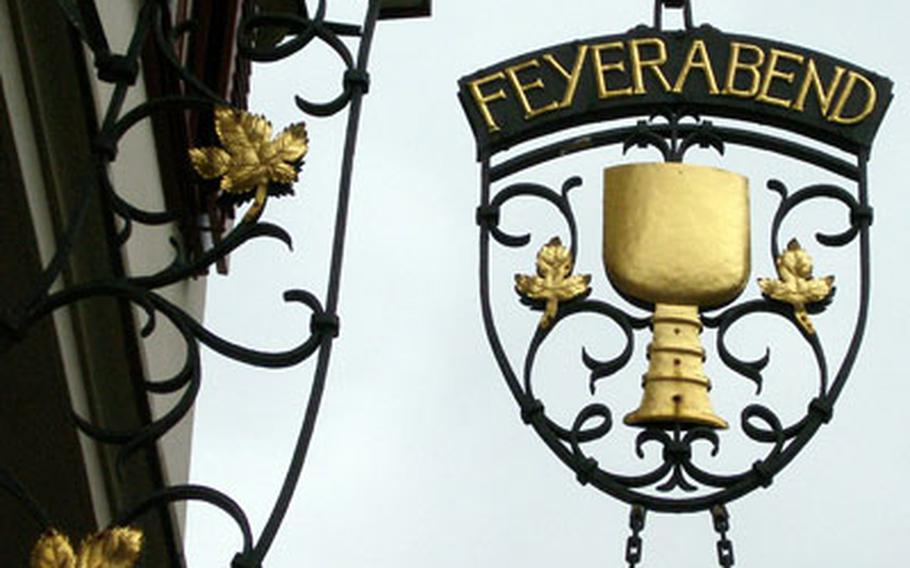 The Feyerabend features a bakery, wine tavern and restaurant all in one. Bad Wimpfen is full of good restaurants, many featuring Swabian specialties like Maultaschen and Spätzli. (Michael Abrams / S&S) 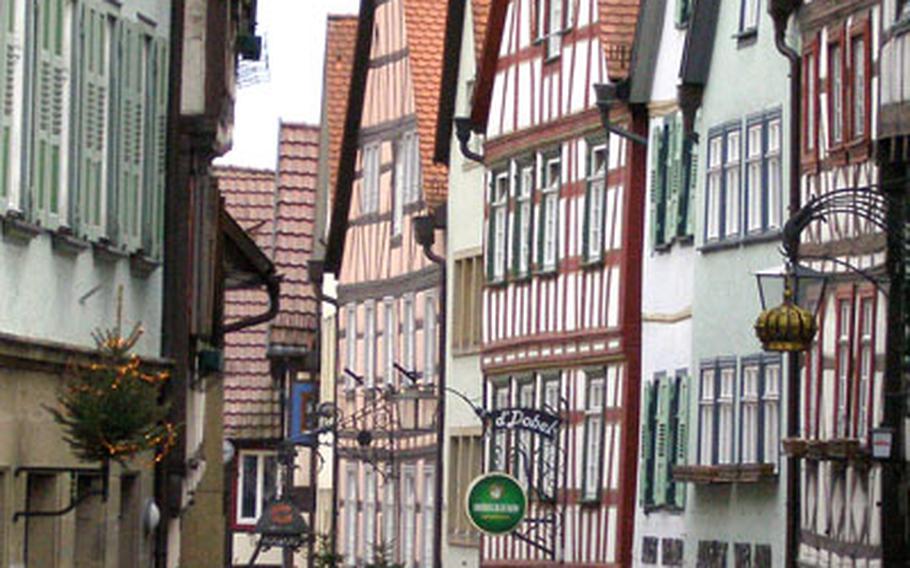 On a bluff above Germany&rsquo;s Neckar River valley stands Bad Wimpfen. The medieval town, about halfway between Heidelberg and Stuttgart, has long been a favorite stop for merchants, kings, armies and tourists.

Its history starts at the bottom of the hill. People settled in what is now Wimpfen im Tal, perhaps more than 5,000 years ago. The castle and the town on the hill didn&rsquo;t come into play until 1182, when Emperor Fredrick I Barbarossa established a residence here. His descendants of the House of Stauffen built the imperial palace crowning the hill.

It has been a spa town since the 19th century, hence the prefix Bad to the town&rsquo;s name. Today its spas, historic buildings, cobblestone lanes, half-timbered houses and Christmas market draw thousands of visitors annually.

No matter from which direction you arrive, the town&rsquo;s landmark, the Blauer Turm, an 800-year-old castle keep, beckons from afar. At almost 192 feet tall and at the center of town, it is a good place to start a town tour.

You can climb its 167 steps up to a platform for a view of the town and the river valley beyond. It was used well into the 19th century as a watchtower, and the view shows why.

Look toward the east, and you will see the Roter Turm, or Red Tower. The upper city, between the two towers, once made up the imperial castle. A walk to the Red Tower will take you past the remains of the palace; the Steinhaus or stone house, supposedly the largest Romanesque dwelling in Germany; and past the arcades, the only remnants of the imperial hall. Check out the varied designs of the pillars. Next door is the palace chapel, built around 1200.

Walking back toward the Blue Tower on Schwibbogengasse, you will pass many fine, half-timbered houses. To the west of the tower are the Rathaus, the town hall and the marketplace.

The twin-towered town church was once Catholic, but after the Reformation, Protestant. In its courtyard is a crucifixion group. Although its statues are worn and many pieces are missing, it is still a beautiful piece of early 16th-century art.

The west and southwest parts of Bad Wimpfen&rsquo;s old town are dominated by imposing half-timbered structures from the 13th through 17th centuries.

The best way to take it all in is to stroll the cobblestone lanes. You will pass two fountains &mdash; the Adlerbrunnen, topped by an eagle and the town&rsquo;s coat of arms, and the L&ouml;wenbrunnen, topped by a lion &mdash; and two unusual museums &mdash; the Sammler und Gl&uuml;ckschweinmuseum and the Deutsches Schutzengelmuseum.

The former is a museum dedicated to pigs, the latter to guardian angels. Both have thousands of items &mdash; pigs and angels in all possible shapes, sizes and materials. Both claim to have the largest collections in Germany, and both have ground- floor stores to help you start your own collection.

On the QT:Directions: Bad Wimpfen is on the Neckar River, about five miles off Autobahn A6. From Heidelberg, you can drive along the river by taking highways B37 and B27; from Stuttgart, B27 leads to the town. Look for free parking at lots on the edge of the old town. Bad Wimpfen also can be easily reached by train.

Times: In the winter, many sights are open on weekends only. The Lucky Pig is open 10 a.m. to 5 p.m. weekends until March 31; from April 1 to Oct. 31 it is open those hours daily. The Schutzengelmuseum is open 11 a.m. to 5 p.m. weekends from now until Easter, and then at the same times on Tuesday through Sunday. The Blauer Turm is open 10 a.m. to noon and 2-4:30 p.m. Tuesday through Sunday.

Food: There are plenty of places offering local specialties, as well as Italian and Greek restaurants. Possibilities include: the Feyerabend, a combination bakery, wine tavern and restaurant; the d&rsquo;Dobel, a restaurant featuring Maultaschen, a Swabian ravioli-like dish (the town is on the edge of Swabia); the Adler, a cheap, cozy tavern serving local specialties; the Kr&auml;uterweible, which specializes in chicken; and the Hohenstaufenpfalz, a more upscale restaurant with a traditional fare that has been featured on television and in print.

Info: The town&rsquo;s Web site, www.badwimpfen.de, has an English-language link. Go to www.schweinemuseum.de for the Lucky Pig Museum and www.schutzengelmuseum.de for the guardian angel museum. The tourist information office is at the train station, down the hill from the old town.