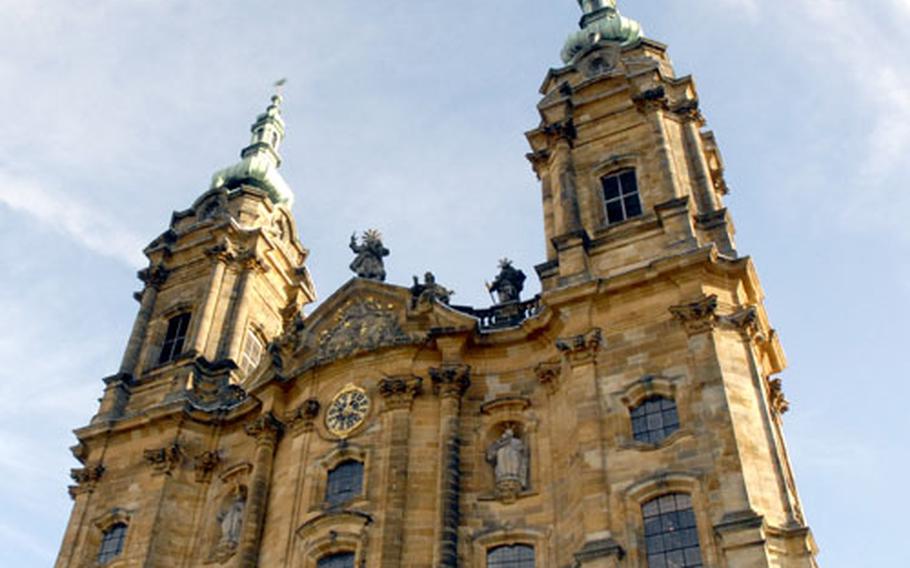 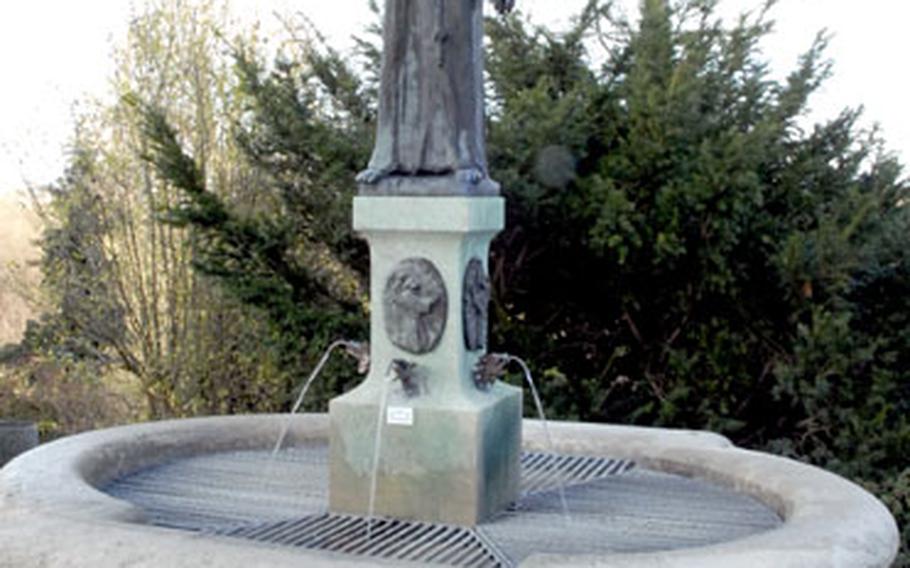 A fountain topped with a statue of St. Francis of Assisi sits in the courtyard of the Basilica Vierzehnheiligen. (Mark St.Clair / S&S)

Overlooking the small Bavarian hamlet of Bad Staffelstein is a church named after not one, but 14, saints.

The Basilica Vierzehnheiligen, or &ldquo;14 holy people,&rdquo; sits atop a hill dominating the beautifully wooded landscape and can be seen for several miles by motorists approaching from Bamberg and the south.

Local legend says that in the mid-15th century, a shepherd boy from a Franciscan monastery saw three visions of a child in a field. In the final vision, the child was accompanied by 13 other children, and they asked the boy to build them a place where they could rest.

Shortly thereafter, miraculous healings began, and two years later an altar was consecrated. The spot became a much-visited place for pilgrims, who could pray for help from the Fourteen Holy Helpers.

Many of the 14 were believed to have healing powers or the ability to ease suffering. During the 14th century, they were venerated as a group because each was believed to be able to relieve one symptom of the Black Plague that terrorized Europe during that time.

The plague would attack without warning and affect various parts of the body, leading sufferers to pray to different saints for help. For example, St. Elmo was believed to help stomach pain, St. Blaise with throat problems and St. Denis with headaches.

After the chapel fell into disrepair, a new structure, designed by Baroque architect Johann Balthasar Neumann, was completed in 1774.

Signs outside the entrance clearly state that no mobile phones, food or drink, cameras or pets are allowed, and the ensuing quiet upon entering the church makes the art and architecture very effective.

Gilded columns and pilasters abound throughout the interior. In the center, under a freestanding altar, the spot where the shepherd had his visions lies enclosed in glass.

It is surrounded by statues of the holy helpers. Some of the images are shocking, including an effigy on the central altar of St. Denis holding his head in his hands. Thirteen of the helpers are said to have been martyred.

At several locations there are informative plaques and brochures, all in German. Books and postcards are also available for purchase, and just outside, there are several vendors selling religious items such as candles, crucifixes and rosary beads.

Two other places of interest are nearby.

One is the Banz Monastery &mdash; formerly the Duke of Bavaria&rsquo;s residence and today used as a conference center. It can be seen from the church, but is about three miles away.

The other is a thermal hot springs that lies in &ldquo;Eden on the Upper Main,&rdquo; as Bad Staffelstein is sometimes called.

On the QTDIRECTIONS: From Autobahn 70, take the exit for B-173 and head toward Coburg. It&rsquo;s about 18 miles from the exit to Bad Staffelstein. Drive straight through the town and head toward the village of Sch&ouml;nbrunn. Signs for the church are along the road, and there is free parking on the hill leading to the church and at the top.

COSTS: Visiting the church is free. Books, pamphlets and postcards are available for as little as 2 euros.

FOOD: There are many restaurants and bars in Bad Staffelstein. The city center is about two miles from the church.