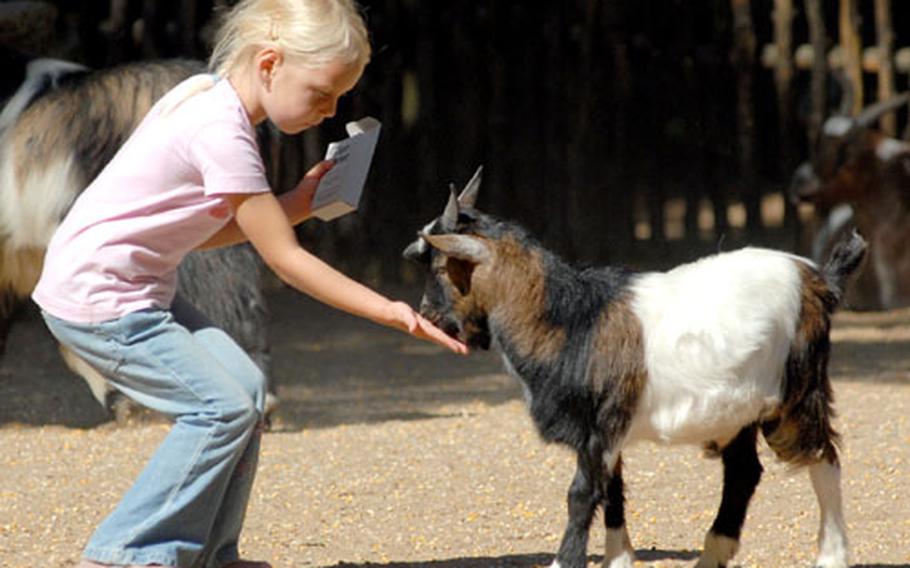 Feeding a goat at the Wildpark in Bad Mergentheim. (Michael Abrams / S&S)

Feeding a goat at the Wildpark in Bad Mergentheim. (Michael Abrams / S&S) A Burren sheep takes a look at all the humans walking by at the Bad Mergentheim Wildpark. (Michael Abrams / S&S) 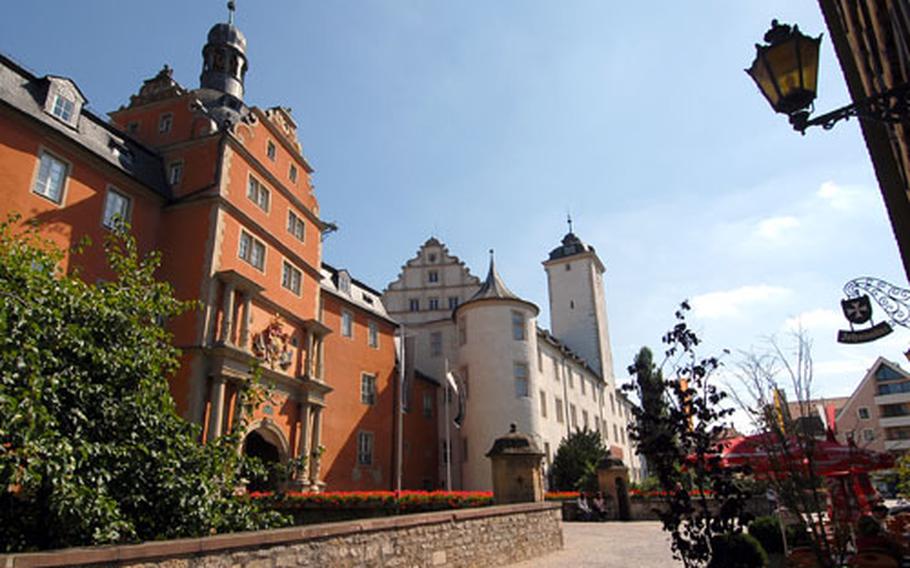 The Castle of the Teutonic Order in Bad Mergentheim, Germany, was given to the order by the House of Hohenlohe, after three of its members returned from a crusade in 1219. (Michael Abrams / S&S) 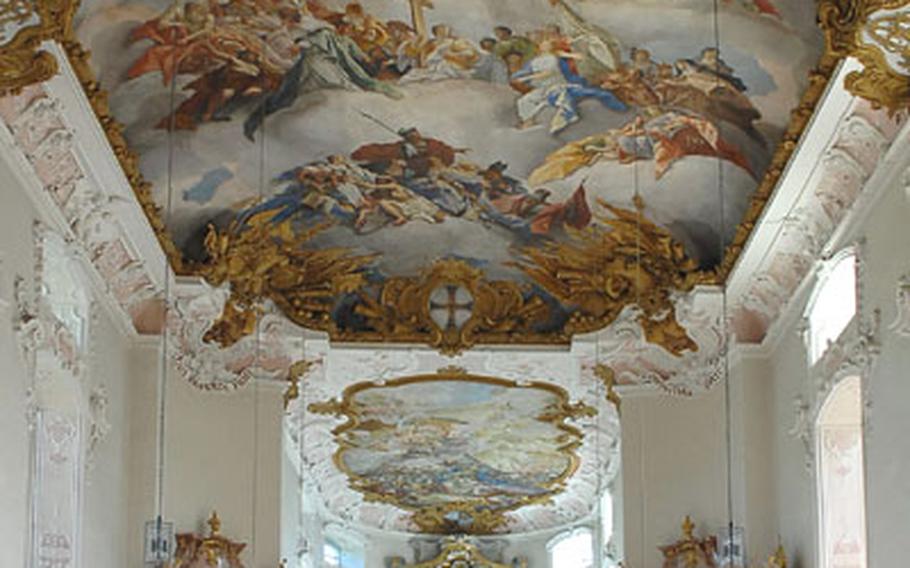 The Castle Chapel, its ceiling decorated with biblical scenes, was built in Baroque style, in the 18th century. (Michael Abrams / S&S) 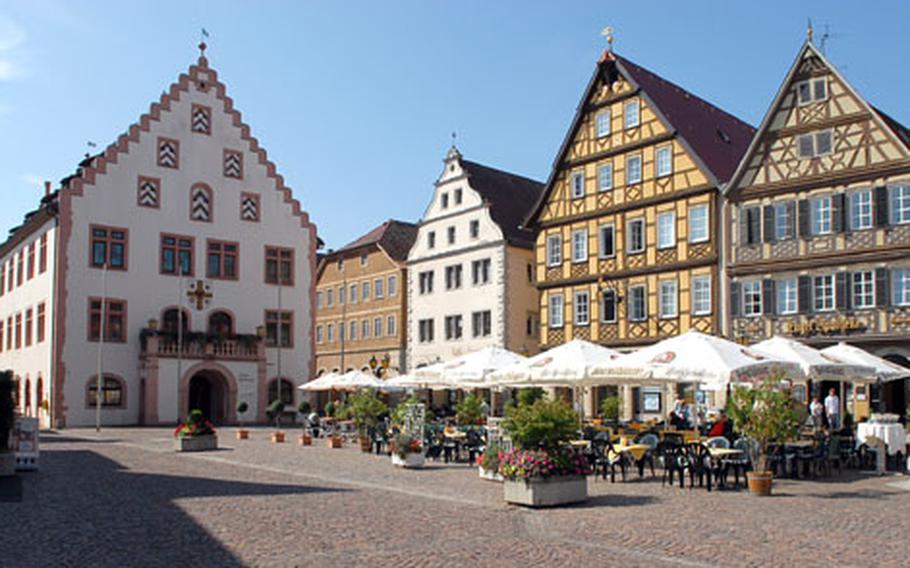 It was a trio of knights and a shepherd who put Bad Mergentheim, Germany, on the map.

In 1826, Franz Gehrig noticed his sheep gathering around a depression in a meadow along the Tauber River.

The water seeping through the ground that attracted the sheep&rsquo;s attention was salty. They had rediscovered an Epsom salts spring that had been forgotten since the Iron Age. Within three years, the town of Bad Mergentheim, which existed near the springs, had transformed into a major spa destination.

It was centuries earlier, in 1219, that Crusaders Heinrich, Gottfried and Andreas Hohenlohe, returning home from Jerusalem, gave their family castle and lands to the Deutsche Orden, better known to us as the Teutonic Order.

Today, the spa and the castle with its museum are the two focal points of the city.

The spa district is a peaceful area of meadows along the Tauber, and the more formal Kurpark. Here are fountains, shops and the Drinking Temple, where you can taste the sping&rsquo;s healing waters.

However, unless you are suffering from diseases of the liver, pancreas, stomach and intestines, you will probably spend more time in Bad Mergentheim&rsquo;s old town than you will at the spa.

The castle, know as both Schloss Mergentheim and Deutschordensschloss, was built by the House of Hohenlohe in the 12th century. Over the years it was expanded and modernized. From 1525 to 1809 it was the residence of the Teutonic Order&rsquo;s grand masters.

It has a parklike, sprawling outer courtyard, and a cobblestone inner courtyard where the entrance to the Deutsch- ordensmuseum is located.

The museum houses exhibits on the order&rsquo;s 800-year history, including the staterooms and a picture gallery. Other exhibits are on the city&rsquo;s history, the Adelsheim Collection of Antiquities and a doll house museum.

Other things to see in Bad Mergentheim are: the market square with half-timbered houses and the old Town Hall; the St. Johannes Minister, a church dating to the early 13th century; the 14th-century Marienkirche, with its highly adorned altarpiece; and the Johanniterhof, a group of ancient buildings surrounding a courtyard that once belonged to the Order of St. John.

If the children are tired of seeing old buildings, head out to the Wildtierpark, and animal park on the outskirts of town where &mdash; if you are lucky &mdash; you can see wolves, bears, deer and much more.

A figure-8-shaped path, about 1&frac12; miles long, leads past the animals and birds in the park. You can get up quite close to some of them. It is even possible to walk through some of the bird enclosures. A highlight is entering the bat cave. The swarming bats take a little getting used to.

One area is dedicated to farm animals, and the wee ones can feed and pet sheep and goats.

If the kids are still full of energy, there is a playground here and at the entrance to the park, where pooped parents can also get something to eat and drink.

On the QT ...Directions: Bad Mergentheim is about 12 miles east of Autobahn 81 between Heilbronn and W&uuml;rzburg. The Wildpark is about a half-mile south of town off highway B-290.

Times: The Deutschordensmuseum is open 10:30 a.m. to 5 p.m. daily except Mondays from April to October; from November to March, it is open 2-5 p.m. Tuesday through Saturday. The Wildtierpark is open daily from mid-March to the beginning of November from 9 a.m. to 6 p.m., with last admission at 4:30 p.m.; from November to mid-March it is open weekends and German holidays from 10:30 a.m. to dusk, last admission at 4 p.m.

Food: There are plenty of good restaurants in Bad Mergentheim at all prices. The Gasthof Johanniter, across from the palace has good local dishes, wine and beer. The Wildpark has a restaurant just inside the gate, and a kiosk near the farm animals.