At Yasukuni Shrine, honoring the war dead while praying for peace 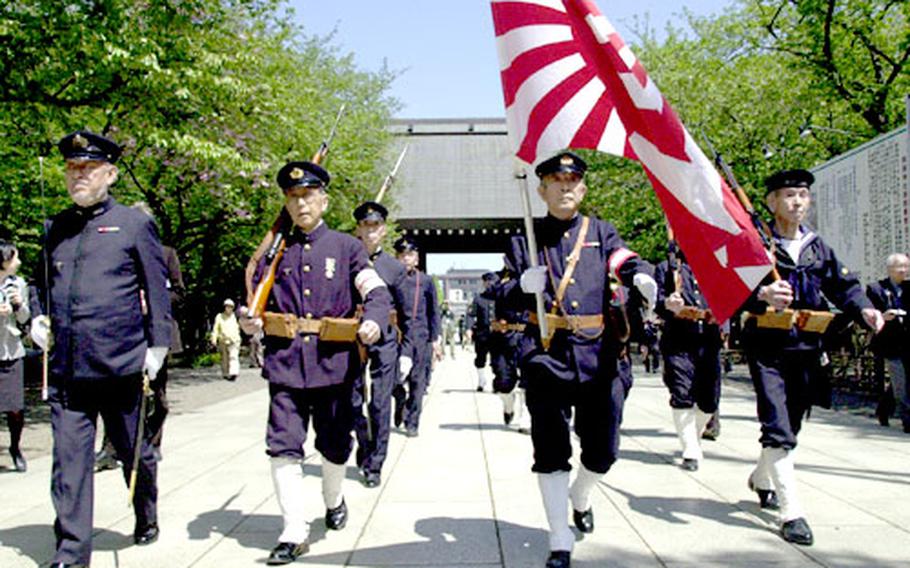 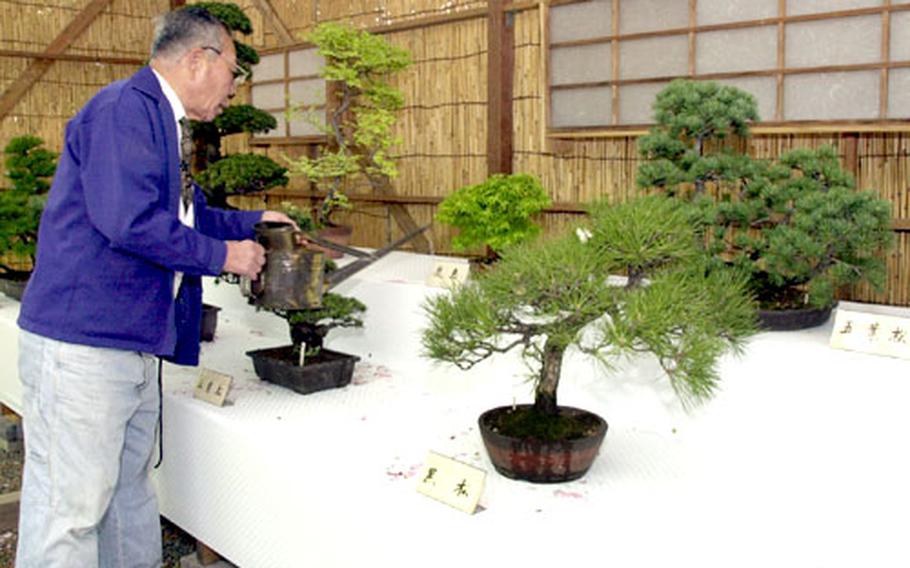 A man waters Bonsai trees in a display at Yasukuni Shrine during the Great Spring Festival. (Jim Schulz / S&S) A woman pours sake as an offering to the spirits of those killed in war during the Great Spring Festival. (Jim Schulz / S&S) A man offers a communion of sake in a Shinto ritual. (Jim Schulz / S&S) Shinto priests walk into the main hall of worship at the Yasukuni Shrine during the Great Spring Festival. (Jim Schulz / S&S)

Under a warm spring breeze at Tokyo&#8217;s Yasukuni Shrine, the Rev. Tadashi Yuzawa stood before a crowd holding an onusa, a branch of the sacred broad-leafed Sakaki tree.

He waved the branch, decorated with paper strips, to purify the crowd for one of the temple&#8217;s largest celebrations of the year, the annual Grand Festival in Spring.

Dressed in white priestly robes, Yuzawa performed a series of rituals to grant peace and honor to the spirits of those killed in battle.

Yasukuni (pronounced yas-kooni) often is called a war shrine. The spirits of 2.4 million Japanese citizens killed in war are collectively enshrined there, including more than 1,000 convicted war criminals.

After the festival, Yuzawa is quick to point out that the shrine honors the war dead by providing a place to pray for peace &#8212; both for the spirits and for Japan&#8217;s future. Emperor Meiji established the shrine &#8212; then called Tokyo Shokonsha &#8212; to promote peace in 1869. It was renamed Yasukuni in 1879.

The spring festival celebrates the collective spirit of the dead, &#8220;not only warriors and soldiers but people (civilians) who gave their lives,&#8221; said the Rev. Tatefumi Yamaguchi, the shrine&#8217;s administrative chief. Emperor Meiji &#8220;hoped the nation would be in a peaceful and restful state for the rest of its future,&#8221; Yamaguchi said.

At the festival, after purifying onlookers with the Sakaki branch, the priests walk across a courtyard into a holy sanctuary. A drum booms out and the chief priest recites a prayer. To the spirits he offers sake and gifts: vegetables, fish, cookies and cigarettes, the items cherished by dead soldiers.

Next, the emperor&#8217;s imperial envoys enter in their bright robes &#8212; one blue, one red and one black and grey. They bring offerings and blessings from the emperor.

The ceremony ends with the gathered crowd walking the perimeter of the courtyard, through the holy shrine and past the offerings, followed by a sip of sake from a bright red dish.

Most visitors to Japan&#8217;s Shinto shrines are limited to the front steps of the main building, far from any ceremonies. But there still is much to see and do, even from this restricted perspective.

Shrines, called jinja, are central to Shintoism, a belief system that worships the spirits of ancestors but is not an organized religion with a doctrine or leader.

&#8220;To revere ancestors&#8217; spirits is the source of religious consciousness of the Japanese,&#8221; Hideaki Takeda, an associate professor at Kokugakuin University, writes for the Association of Shinto Shrines.

Jinja are built to worship those spirits. They often are dedicated to the famous and patriotic: Meiji Shrine in Tokyo is dedicated to Emperor Meiji; Heian Shrine in Kyoto to Emperors Kanmu and Komei, and Minatogawa Shrine in Kobe to the spirit of the great warrior Masashige Kusunoki.

Shrines differ from many western ideas of holy sanctuary. No possessions or remains are sheltered inside. Instead, the grounds around a shrine are replete with natural objects for the spirits to inhabit. The area is simplistic and serene.

A shrine entrance is marked with a Torii, a tall gate. It&#8217;s followed by a path flanked by a grove of trees leading to the main building.

Inside the complex is a basin of water with ladles, often bamboo. They are for visitors to wash their hands and rinse their mouths to be pure before the enshrined spirit, according to the Association of Shinto Shrines. Around the path at certain times of the year, trees are wrapped with white papers with prayers for the spirits.

To honor the spirits, visitors should walk to the front of the shrine, present an offering &#8212; usually a coin tossed in a collection box &#8212; and make a noise by clapping, or ringing a bell if the shrine has one, to get the spirits&#8217; attention.

Trips to any of the 80,000 jinja in Japan follow a similar course. Anyone is welcome to visit and follow the ritual.

Jinja, according to the Shinto Shrine Association, shows visitors not only the beauty of the sacred buildings and surroundings but also a piece of the spirit of Japan.

&#182; When entering the shrine, you should be dressed properly (avoid jeans and T-shirts if possible) and bow at the torii shrine gate.

&#182; In a sheltered area inside the entrance is a stone water basin. This is where visitors should perform simple but important rituals meant to purify mind and body.

The basin should have one or more ladles. Use them to wash your hands and mouth:

&#8226; With your right hand again, ladle water into the palm of your left hand. Use this water to wash your mouth; do not put your mouth to the ladle. Spit the water into the area provided, perhaps with a drain.

&#8226; When finished, lift the ladle vertically to pour water still in the ladle to wash the handle.

Replace ladle face down. Wipe hands with a handkerchief.

&#182; Then you may go before the altar. A long, slatted wooden box usually will be at the edge of the roofed portion of this inner building. If there is a bell above this box, make a small bow and pull its cord to ring it. Pitch some yen coins into the wooden box. Take two deep bows. Clap hands twice. Then take another deep bow.