At the Senckenberg Museum, a new look at an old story 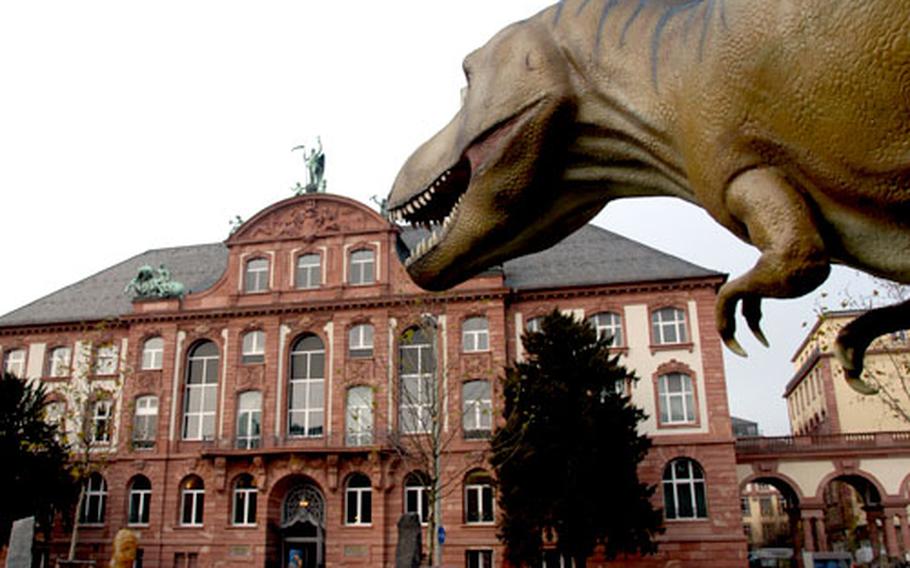 A life-size model of a tyrannosaurus stands in front of the Senckenberg natural history museum in Frankfurt, Germany. (Michael Abrams / S&S)

A life-size model of a tyrannosaurus stands in front of the Senckenberg natural history museum in Frankfurt, Germany. (Michael Abrams / S&S) 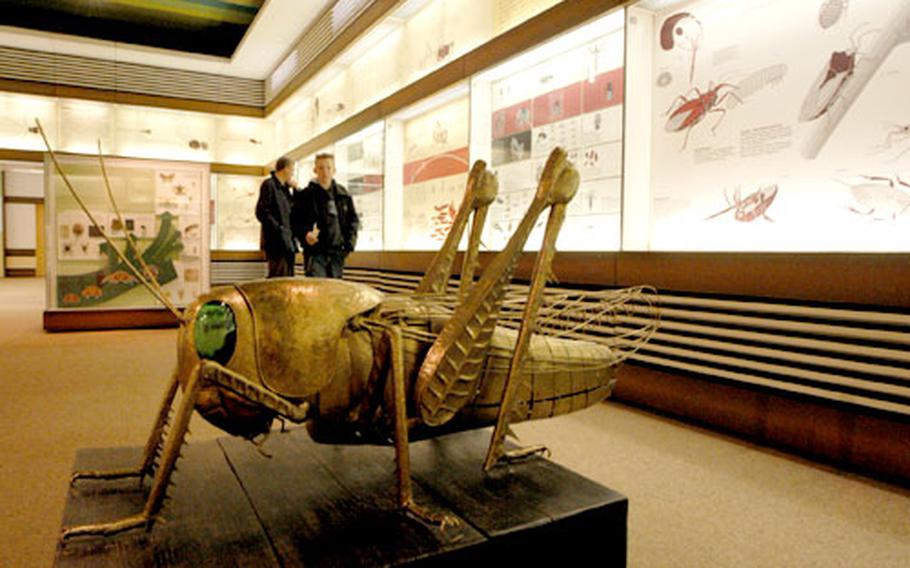 Don&#39;t worry, grasshoppers don&#39;t grow to be this big. It&#39;s just a model of one in the insect department of the Senckenberg museum. (Michael Abrams / S&S) 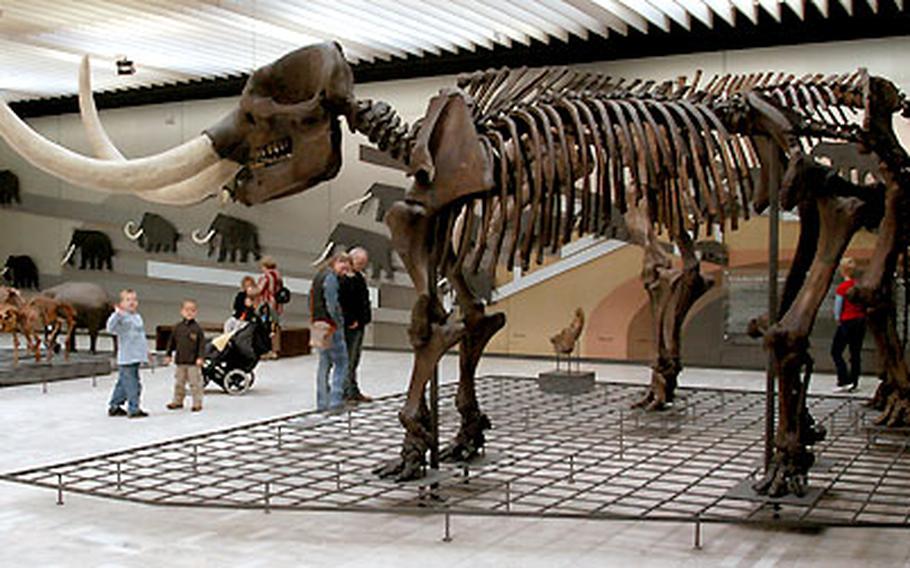 This mastodon that lived 10,000 years ago in what is now New York is one of the extinct creatures on display at the Senckenberg Natural History Museum. (Michael Abrams / S&S) 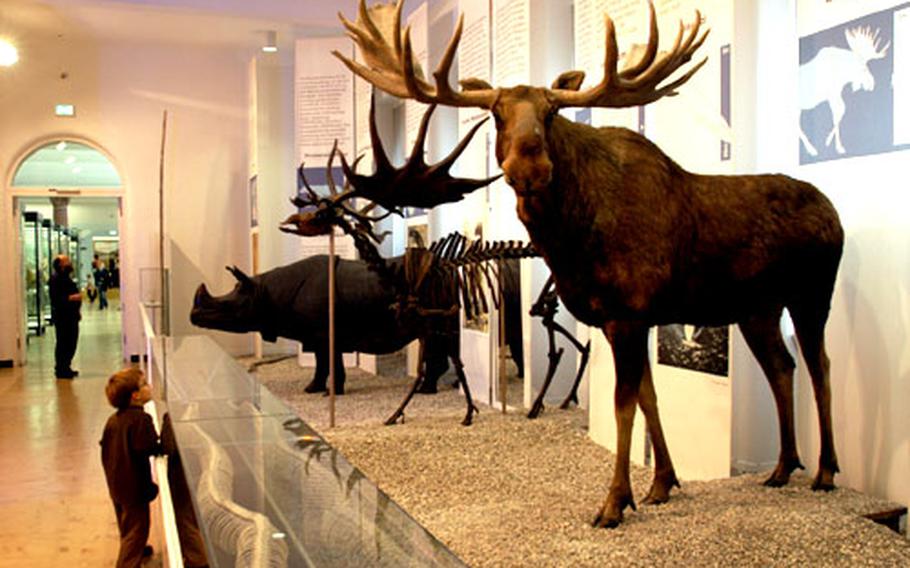 The animals on display at the museum got this little fellow&#39;s attention (Michael Abrams / S&S) 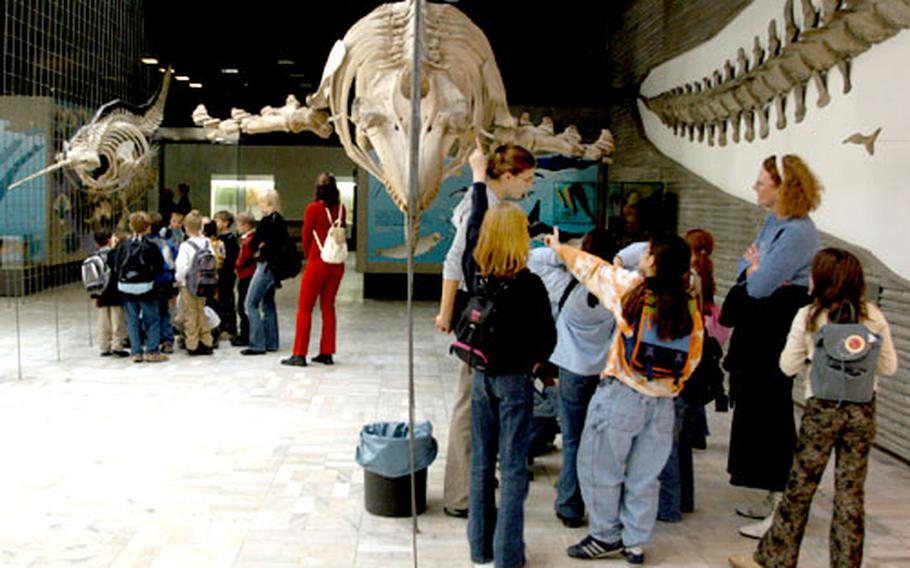 Kids check out the skeletons of two whales, a Narwhal at left and a killer whale at right. (Michael Abrams / S&S)

It is not &#8220;Jurassic Park.&#8221; No danger of being chased by a Tyrannosaurus rex or stomped on by another dinosaur.

Well, not a live T. rex at least, although there is a model of one standing outside the Senckenberg museum in Frankfurt, Germany, and the skeleton of one inside. Still, during a visit to the famed natural history museum, you won&#8217;t have to be afraid of becoming dinosaur feed.

The museum belongs to the Senckenberg Natural History Research Foundation, founded in 1817. Named for Frankfurt physician and philanthropist Johann Christian Senckenberg, it has been housed in its present building since 1907. The museum went through extensive renovations this year and reopened last month.

The exhibits are spread over three floors. There are displays on mammals, reptiles, birds, fish, insects, geology and the evolution of man. The most popular are the whales, elephants and dinosaurs.

The dinosaur hall, just after the entrance, features a huge diplodocus, a stegosaurus, a triceratops, assorted bones and skulls and the tyrannosaurus. It is a replica; the original fossil is in the American Museum of Natural History in New York City. The diplodocus is an original, though. Unearthed in Wyoming, it was a present from the AMNH to the Senckenberg on its 1907 opening.

Beyond the &#8220;terrible lizards&#8221; is another large room with the skeletons of whales and elephants. A couple of the pachyderms&#8217; ancestors are here, too, including a mastodon that lived 10,000 years ago in what is now New York.

The exhibit on the evolution of man traces our ancestors from the earliest humanoids to the present.

An updated exhibit features fossils found at the Messel pit, a former mine between Darmstadt and Babenhausen. The pit is on the UNESCO World Heritage list, and is Germany&#8217;s only natural site on the list. In the layers of oil shale exceptionally well-preserved mammal fossils, including the forebears of the modern horse have been found.

Upstairs are mammals, reptiles, amphibians and birds. An interesting exhibit is the embryology of man, where you can trace a human from conception to birth. It has life-size models of embryos and fetuses to put the growing of a new life into perspective.

While the animal displays are interesting, it is much nicer to see them live in the wild, or at least in a zoo. Unfortunately that is not always possible &#8212; many of the animals have become extinct, leaving the museum the best place to see what the species looked like.

The top floor is full of creepy-crawly things like insects and spiders. Here you might be just as happy that they are not alive. This floor also has the fish and crustacean exhibits.

The museum is popular with children, and during the week it is a favorite school field trip destination. After all, checking out the bones of a tyrannosaurus rex beats sitting in class any day.

Where: The Senckenberg museum is at Senckenberg Anlage 25 in Frankfurt am Main, Germany. Exiting autobahns 5, 648 or 66 follow the signs toward Messe and Universit&#228;t. The museum is next to the university.

There is virtually no parking around the museum on weekdays; a little more on weekends. There is a parking garage at the Marriott hotel and one on Adalbertstrasse, both about two blocks away.

If taking subways U4, 6 and 7 or tram line 16, get off at the Bockenheimer Warte stop, on bus line 32 get off at Senckenbergmuseum.

Costs: Admission is 5 euros for adults and 1.50 euros for children 6-18. For school classes, the cost is 1 euro per pupil.

Information: An extensive guidebook of the museum costs 6.80 euros. The museum store sells souvenirs, including dinosaur models and other natural history mementos. The museum&#8217;s telephone number is (+49) (0) 69-75420; its Web site is: www.senckenberg.uni-frankfurt.de/sme.htm.

Fun dinosaur fact: According to www.enchantedlearning.com, &#8220;Dinosaurs were not a failure. Various dinosaurs lived all over the Earth for about 165 million years. In comparison, humans have only been around for about a million years. In terms of survival through geological time, the dinosaurs were long-lasting animals, probably leaving birds as their descendants.&#8221;