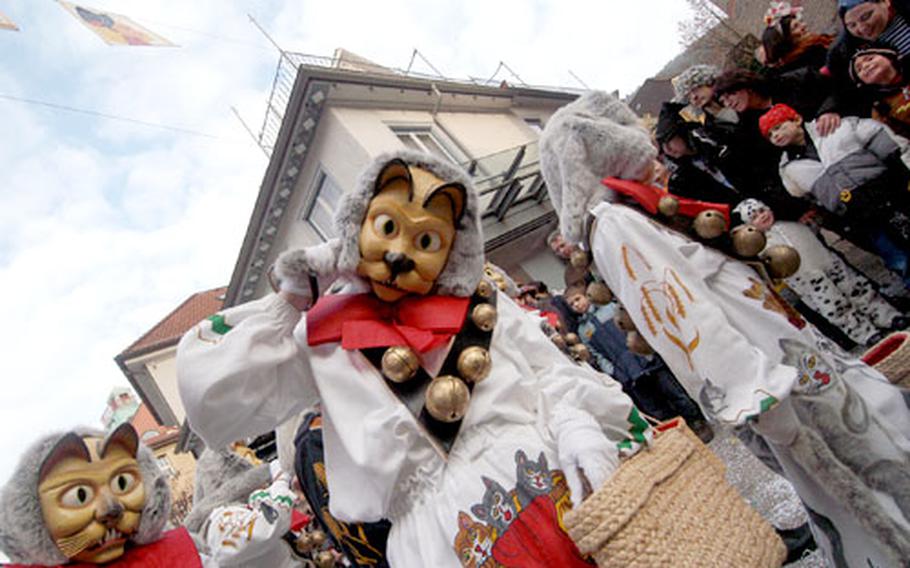 Members of the Katzenzunft (cats guild) from Hardt, Germany, march in the Fasnet parade in Schramberg. (Michael Abrams / S&S)

Members of the Katzenzunft (cats guild) from Hardt, Germany, march in the Fasnet parade in Schramberg. (Michael Abrams / S&S) 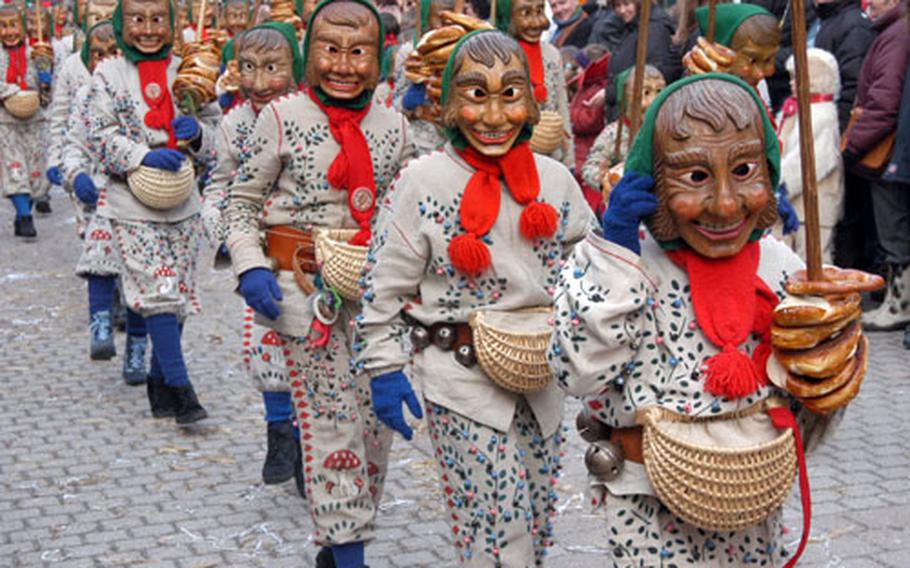 One of many masked Fasnet guilds marches in the Schramberg Fasnet parade. (Michael Abrams / S&S) 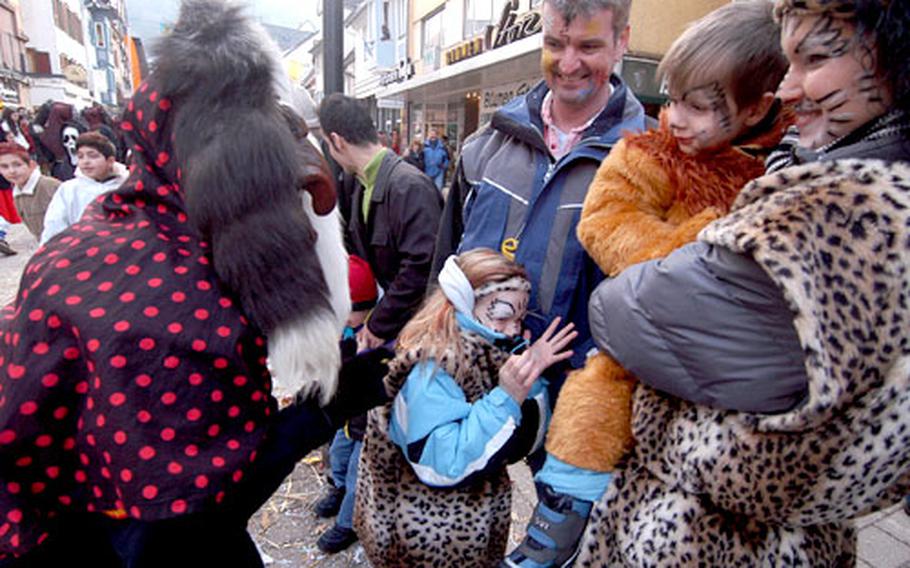 A girl along the parade route tries to stay out of the grip of a witch from the Finsterbach Hexen guild. (Michael Abrams / S&S) The Hansels are the largest group of Narren (fools) in the Schramberg carnival celebrations. On the Sunday before Ash Wednesday, the Schramberg Fasnet guilds march in a parade known as the Schramberger Hanselsprung. (Michael Abrams / S&S)

Tucked away deep in Germany&#8217;s Black Forest, Schramberg takes Fasnet, as carnival is called there, seriously.

Well, that is, if you can call playing music, riding tublike contraptions down a river, parading through the streets and donning masks and costumes serious.

The fun in Schramberg starts the Saturday before Ash Wednesday when the mayor gives the key to the city to the master of the fools guild.

On Sunday is the Hanselsprung, when more than 700 Hansels, a character of the Schramberg carnival, parade through town to the music of the &#8220;Fools&#8217; March.&#8221; Afterward they pass out more than 18,000 pretzels to the spectators.

But Monday is the big day.

By early morning the Katzenmusiken, bands playing music, often on homemade instruments, parade through town, waking fools and nonfools alike. At 10 a.m. they have a competition in front of the town hall judged by the Committee of Eleven.

At 11 a.m. the Bach-Na-Fahrer, the tub riders, march through town to the starting point on the river. Spectators then scramble for a place along the river for the Da-Bach-Na-Fahrt, the wild ride down the river that begins at 1 p.m.

At 2:30, the big fools parade begins, with the Schramberg fools and guilds from other towns joining marching bands and floats as they wind their way through town.

On Fat Tuesday, the fools exit the town hall one more time for the Brezelsegen, or pretzel blessing. At midnight it is all over when the Committee of Eleven, in charge of festivities, buries Fasnet at the Rattenball, the final ball of the season.

The roots of Fasnet in Schramberg reach back to the 16th and 17th centuries. Court records in the mid-18th century show people being prosecuted for being masked and for drunkenness. A royal decree banned the fun altogether in 1809, but 11 years later a Catholic priest was still complaining about the foolery.

The Schramberg Narrenzunft, or fools guild, was founded in 1911, and the first Na-Bach-Na-Fahrt took place in 1936.

What started as more or less a diversion from going to work on Rose Monday is now an event that draws more than 25,000 spectators to the banks of the Schiltach, the stream that flows through Schramberg.

Three weeks before the start, 80 contestants are chosen by the &#8220;da-Bach-Na-Fahrer&#8221; guild to pilot the 40 tubs in the race. They then decorate the tubs, with material provided by the guild, often using political or local topics.

The big parade that follows is a mix of traditional Black Forest Fasnet, with fools guilds dressed in wooden masks and pulling shenanigans on spectators, and the more modern floats with humorous and satirical political themes.

As in most Black Forest Fasnet strongholds, the fools of Schramberg come in a variety of carnival characters.

There are about 1,200 costumed participants in the town&#8217;s fools guild, foremost being the

Hansel, whose mask is either a friendly face or a smiling one. He wears bells on his costume and carries a sword full of pretzels.

The Narro is an imposing figure whose mask has two cornucopias with a bell at the end, much like a jester. He wears a belt of bells, and carries a basket filled with candy and a &#8220;Narrenbuch,&#8221; a book whose contents lampoons Schramberg citizens.

The Br&#252;eli is a sad-looking character, created in 1948 and expressing the poverty after World War II. His mask has large tears running down it and he carries an umbrella and handkerchief to wipe his tears.

The Bach-na-Fahrer is modeled after rafters who once piloted their craft down the river. Today a Bach-na-Fahrer, with his black, pointed cap, is the first rider down the Schiltach during the Na-Bach-Na-Fahrt.

The two other characters of the Schramberg carnival are solitary ones: the Kehraus who carries a broom to sweep away winter as he leads the Hanselsprung with the Endivien-Butz (endive-beadle), who is dressed in a uniform and carries a large bell to announce bulletins.

The Schramberg fools, along with the visiting fools make for a colorful parade. But watch out: Many are up to mischief. Like rubbing confetti in your face, or stuffing it down your back.

But not all are up to no good &#8212; they do pass out goodies to the children &#8212; and it is all just part of the foolery that is known as Schramberg Fasnet.

Getting there: Take Autobahn 81 south, then follow highway B462 west past Dunningen and Sulgen to Schramberg.

What&#8217;s to eat: There are stands selling food and drink and there are plenty of cafes, taverns and restaurants, but expect them to be pretty full.

Need more? Check out the English language pages at www.schramberg.de and the German-only page of the Schramberg fools guild at www.narrenzunft-schramberg.de.