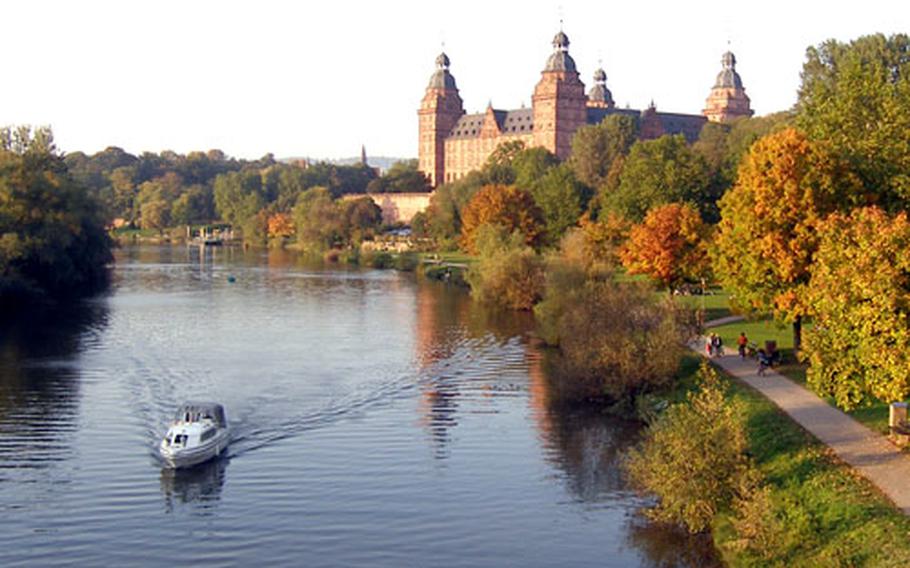 Aschaffenburg’s Johannisburg Palace overlooking the Main River dates back to the 17th century. Built on the site of a destroyed medieval fortress, it has a 14th-century keep. (Michael Abrams / S&S)

Aschaffenburg’s Johannisburg Palace overlooking the Main River dates back to the 17th century. Built on the site of a destroyed medieval fortress, it has a 14th-century keep. (Michael Abrams / S&S) 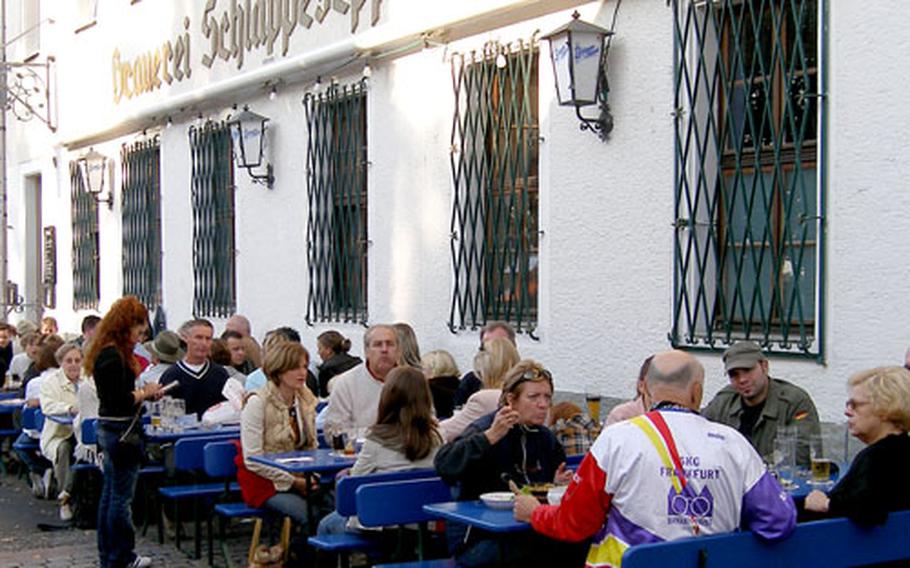 The Schlappeseppel brewery tavern, just down the street from Johannisburg Palace, is popular with locals and tourists alike. (Michael Abrams / S&S) 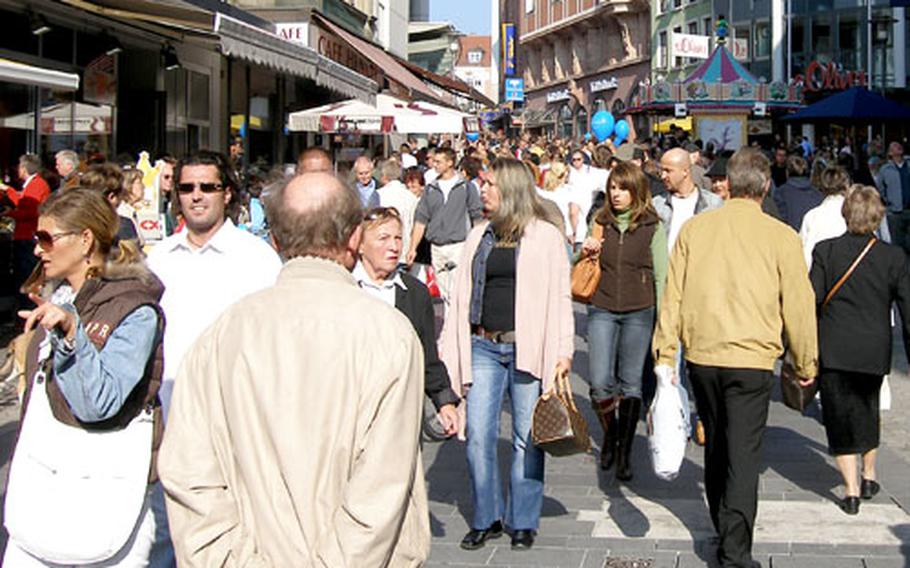 A popular part of Aschaffenburg is the pedestrian shopping area lined with stores, cafes and restaurants. (Michael Abrams / S&S) 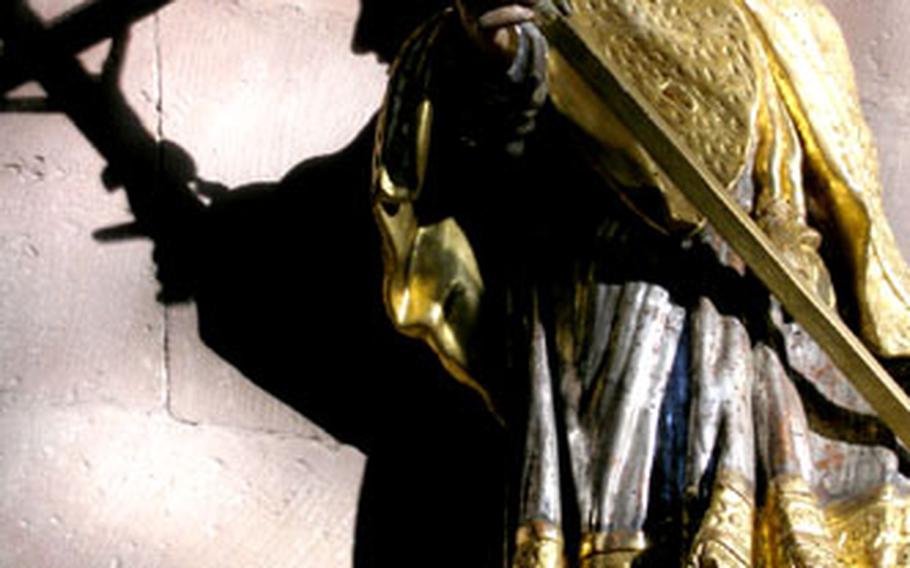 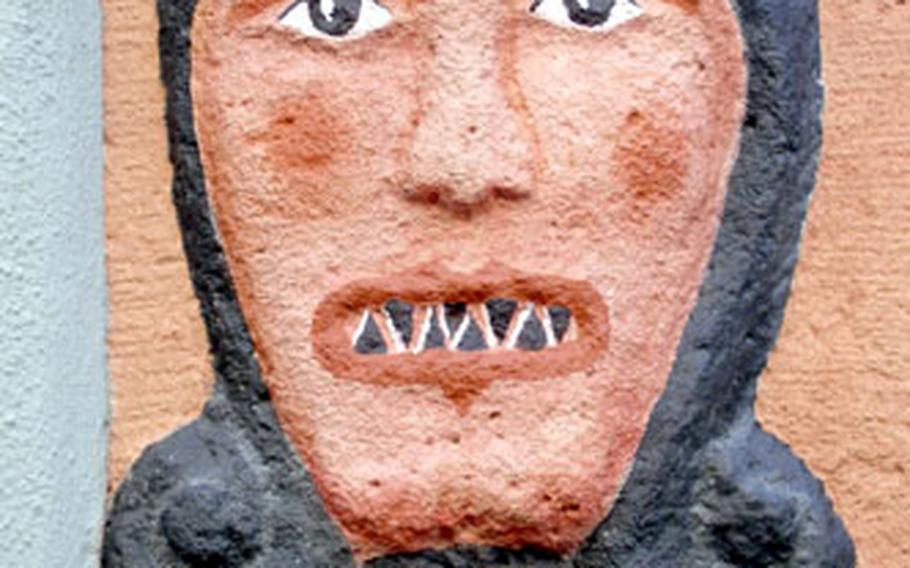 Aschaffenburg was once a familiar place to many Americans stationed in Germany. Formerly filling a half-dozen caserns, the American presence in this city on the banks of the Main River has now dwindled to a housing area. Even it is scheduled to close soon.

But that does not mean Americans do not have a reason to go to Aschaffenburg anymore. The 1,000-year-old city has plenty to offer for a day&rsquo;s outing.

The city&rsquo;s most striking feature &mdash; and when coming from the west a sight you cannot miss &mdash; is the Johannisburg Palace, which towers over the river and the town.

Built in the early 17th century for the prince electors and archbishops of Mainz, it is one of the most important palaces built in the German Renaissance style. Not so obvious from the outside, a mighty 14th-century keep, the remnant of an earlier castle, is revealed by stepping into the inner courtyard.

Today, the castle houses a library, a museum, a winery and a restaurant.

The museum features furniture and art collected by the princes, plus arts and crafts from the 17th to 19th centuries. It also hosts temporary exhibits. Until Jan. 7, there is one on a visit to the city 200 years ago by Napoleon, after his defeat of the Prussians in Jena and Auerstedt.

Napoleon wasn&rsquo;t the only conqueror to visit. In 1631, during the Thirty Years&rsquo; War, King Gustav Adolf of Sweden took the town. The king&rsquo;s court found that the city was dry &mdash; there was no beer to quench the king&rsquo;s thirst. So a soldier who knew how to brew was found. Because of a lame foot, he was called schlappe Seppel &mdash; meaning &ldquo;weak&rdquo; &mdash; and so Schlappeseppel beer was created. Or so the story goes.

Today, the beer is a favorite of the area and has won international awards. The brewery tavern of the same name is down the street from the palace and is popular with locals and tourists alike.

If you are visiting the city between April and September, before you settle down with your beer, take a stroll to the Pompejanum, a house that King Ludwig I of Bavaria had built in the 1840s. It is the replica of a Roman house from Pompeii.

Two other places worth seeing in the old town are the Muttergottespfarrkirche and the Stiftsmuseum. The former is the city&rsquo;s oldest parish church. Damaged extensively in World War II and rebuilt, it features ceiling frescoes from the 1960s.

The latter is a museum featuring archaeology, medieval sculptures and church treasures and is housed in a building belonging to the former Saints Peter and Alexander collegiate church.

Walk off your beer with a stroll along the Main before heading up through the city&rsquo;s pedestrian shopping area, lined with stores, cafes and restaurants.

On the far side of the pedestrian zone is Park Sch&ouml;ntal, a city park. If you like to shop, walk through the park to the City Galerie, a two-story shopping mall.

Aschaffenburg is not a bad place for a night out, either. In the old town, besides Schlappeseppel, there are plenty of restaurants and taverns along Dahlbergstrasse, and in the pedestrian area, check out Ro&szlig;markt street. The Aloha is a popular place for cocktails and music, and next door is Colos-Saal, a live-music club featuring concerts by up-and-coming bands, aging legends and local acts (www.colos-saal.de).

TIMES: Visit the city any time. From spring to autumn, you can enjoy outside dining and drinking; the city&rsquo;s Christmas market is at the foot of the palace in December. Schloss Johannisburg is open 10 a.m to 4 p.m. Tuesday through Sunday from October to March, and 9 a.m. to 6 p.m. April to September. The Stiftsmuseum is open 11 a.m. to 5 p.m. Tuesday to Sunday, and the Kunsthall Jesuitenkirche is open 2 to 8 p.m. Tuesdays and 10 a.m. to 5 p.m. Wednesday through Sunday. The Pompejanum is open 9 a.m. to 6 p.m. daily, closed Mondays, April to September.

FOOD: There are plenty of restaurants in all price classes. Try the restaurant in Hotel Wilder Mann for local specialties, Schlappeseppl for hearty brewery cuisine, and Q Bar for Cuban/Latin American food.

INFORMATION: An English link has limited information at the city&rsquo;s Web site: www.aschaffenburg. de. The tourist information office is on Schlossplatz, across from the palace; call 06021-395-800. See legacy.stripes.com/ article.asp?section=103&article=22683 &archive=true for a story on nearby Sch&ouml;nbusch Park, also worth a visit.