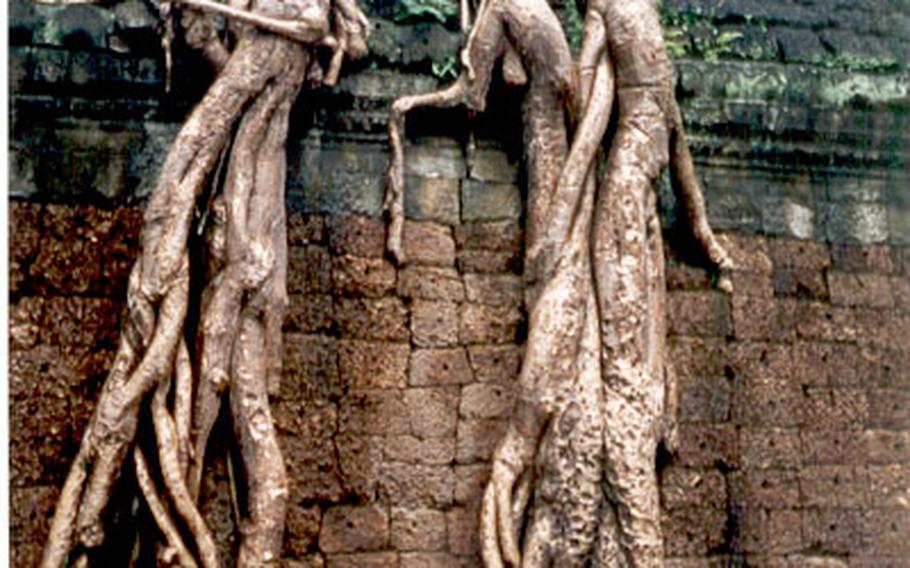 Trees with roots like muscular worms grow atop walls at the Angkor temples. (Jeremy Kirk / S&S) 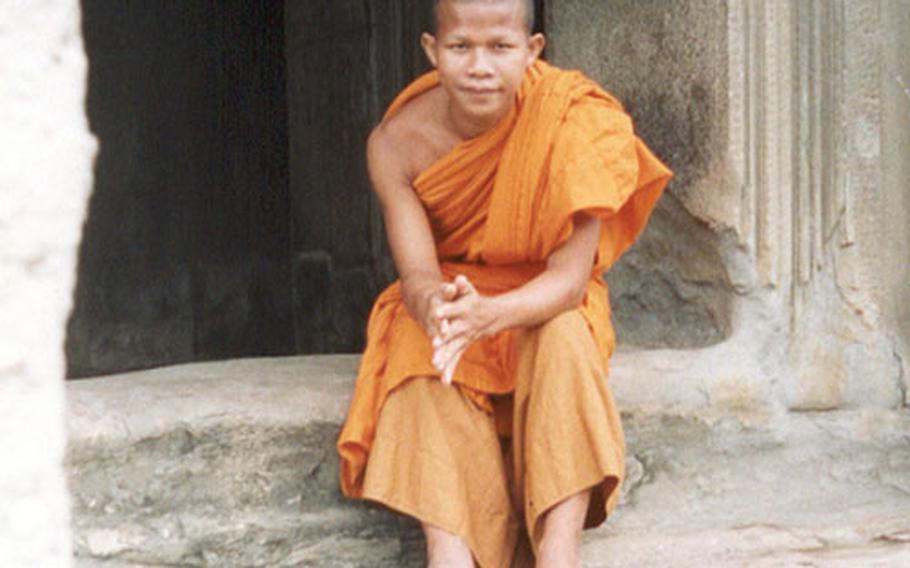 Meas, a 22-year-old Buddhist, sits on the steps on part of Angkor Wat. (Jeremy Kirk / S&S) Many stone carvings at Angkor temples are missing or broken, the result of exposure to nature and looters seeking saleable artifacts. (Jeremy Kirk / S&S)

The Great Wall of China is an unimaginative zipper of dull rocks when compared to the mystical temples of Angkor, the most popular of Cambodia&rsquo;s attractions.

Featured in the recent movie &ldquo;Tomb Raider,&rdquo; the largest and most commonly visited temple is Angkor Wat.

Young Buddhists with smooth- shaved heads navigate the grounds clad in their orange robes and sandals.

Intricate pictorial bas-reliefs line four sides of the temples. At nearly a half-mile long, the stone carvings depict Hindu and Buddhist epics. They are a testament to the two religions&rsquo; influences on Cambodia.

Inside, shafts of light beam down, illuminating small worship areas.

For a few riel &mdash; the exchange rate for the Cambodian currency is about 559 riel to a U.S. dollar &mdash; visitors can buy incense. Placing lighted incense in worship areas is a tradition here, and shows respect for local traditions.

Built over 600 years, the temples spread over 77 square miles north of Siem Reap, a small town near Tonle Sap Lake. Even through their decay, the temples are spectacular evidence of Khmer architectural feats, hubs of religious and cultural finesse.

Some of the temples have been made accessible only in recent years by the removal of land mines and cutting of jungle vegetation.

Siem Reap is a small town that mostly gears itself to visitors. It&rsquo;s entirely a service economy boosted by its greatest jungle resource: the temples.

Angkor Wat &mdash; the most often visited site &mdash; is one the largest temples, the best restored, and recently was featured in the movie &ldquo;Tomb Raider.&rdquo; Surrounded by an enormous moat and short-trimmed grass, Angkor Wat&rsquo;s stone spirals jut heavenward.

It&rsquo;s an awesome feeling, bridging the moat to the main complex, walking on stones almost 1,000 years old and feeling the 21st century slip away. Young Buddhists with smooth-shaved heads circulate through the temple&rsquo;s grounds, clad in orange robes and sandals.

Pictorial bas-reliefs line four sides of the temples, almost a half-mile long intricate stone carvings depicting Hindu and Buddhist epics. The bas-reliefs come from Angkor&rsquo;s heavy influence from the two religions, which were modified according to the prevailing rulers of the time.

Angkor Wat is perfectly modular and angular. Shafts of light from overhead illuminate the inside, where aging Buddhists staff small worship places. It&rsquo;s respectful to place lighted incense, purchased for a few riel, the Cambodian currency.

Dozens of the structures are scattered through the jungle; many have been made accessible only recently by the removal of land mines and the trimming of aggressive jungle vegetation.

Archeologists have debated what to do with the encroaching jungle and how to preserve the temples. But it would take major reconstruction to remove foliage from crevices and between stones.

But it is this decay, and westerners&rsquo; fantasies of being like Indiana Jones, that account for the area&rsquo;s increasing tourism.

Ta Prohm was built around 1186 for the royal temple center of Jayavarman VII. At its height, the kingdom encompassed more than 3,000 villages, 80,000 temple workers and 600 dancers. But today, the jungle holds the ruins in an embrace that eventually will be fatal. Its nooks and crannies are rough: Some signs warn of falling rocks; one must progress with care on the damp, jumbled stones.

Such signs of eventual destruction may account for increasing tourist visits. Still, finding a silent spot among the soft buzz of insects remains easy &mdash; at least within temple grounds.

Outside, however, thriving service industries have popped up. Dozens of children rushing to tourists with trinkets; older women aggressively hawk food &mdash; signs underscoring that the Cambodian economy is on life support.

When he&rsquo;s not studying, 20-year-old Buddhist-in-training Tuan hangs out around the Terrace of the Elephants.

The temple group is undergoing restoration, thanks to Japanese donations.

On his days off from studying, he sells postcards and books. He also offers guide services through the ruins.

Outside the nearby temple of Banteay Kdei, police officer Pahn Phal Cahouk lounges against a large stone.

Flicking his shiny police badge, he, too, sells souvenirs.

&ldquo;All the police, they have to find some other job to get money,&rdquo; Cahouk says. &ldquo;If they had no tourists come here, it would be very difficult.&rdquo;

A one-day pass to Angkor is $20, although even a blitzkrieg tour can&rsquo;t cover all the territory. The best way to see the most may be to hire a moto driver &mdash; a scooter you pay to get a ride on &mdash; for about $7 for the day. The moto driver can take you on popular routes where you can see the most. Taxis, fewer in number, cost more.

Siem Reap has dozens of hotel and guesthouses, costing from $2 per night up to $300. Clean, air-conditioned rooms with a television can run from $10 to $15 per night.

Where: Siem Reap is about 192 miles from Phnom Penh.

Transportation: A cruise on the Tonle Sap river is the best way to get there from the capital city.

For $25, a tour boat carries you to Siem Reap in style. You can lounge atop the boat and get a tan. Or you can watch Khmer movies broadcast in the vessel&rsquo;s air-conditioned cabin.

For information on the cruise to Siem Reap, contact the General Directorate of Tourism in Phnom Penh.

You can also fly or hire a driver.

Flights on Cambodian Airlines are available twice a week between the capital and Siem Reap. They cost about $50 each way.

If you take the boat, near Siem Reap the vessel will slink through a narrow causeway where people live in incessantly bobbing wooden boats.

There, children wave to tourists while guesthouse proprietors and moto and taxi drivers hold up signs to attract business.

Where to stay: Siem Reap is a small town geared toward visitors heading to nearby temples.

There are dozens of hotel and guesthouses, costing from $2 to $300 per night.

Expect to spend at least $10 to $15 per night for a clean, air-conditioned room with a television.

In addition to the rich religious history here, visitors can relive the violent history of Cambodia in the capital of Phnom Penh.

There, Tuol Sleng Prison &mdash; where the Khmer Rouge regime systematically tortured and killed thousands during the 1975-78 attempt to forcibly convert Cambodia into an agrarian-based society by banning education and money &mdash; stands as a shocking testament to the macabre period in Cambodian history.

About 18,000 people were tortured and killed at the site known as S-21, formerly a school but seized by Khmer leader Pol Pot&rsquo;s security forces in 1975.

Outside, Tuol Sleng has a nice grassy lawn with palm trees.

Inside, cells have peeling paint. Metal torture devices are shown with graphic photos of victims. Room after room is lined with mug shots of those who were imprisoned, many barely adolescents.

In the final room of the prison, a glass display cabinet is filled with human skulls.

Prisoners at Tuol Sleng ended up in the famed Killing Fields of Choeung Ek, where they were bludgeoned.

The fields are open to the public; human remains are visible.

Wat Phenom, a temple on the city&rsquo;s tallest hill, is guarded by stone lions.