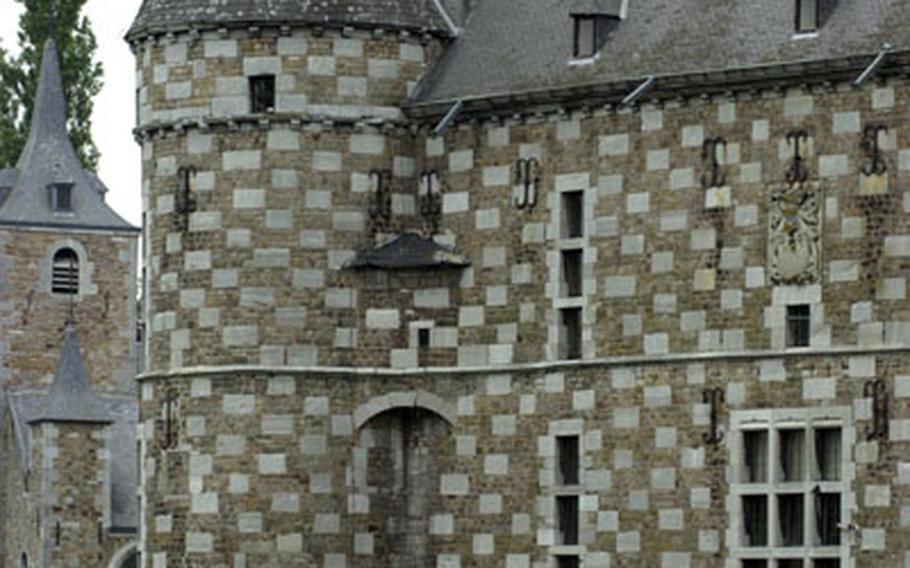 Jehay Castle in Amay, Belgium, dates to the 16th century in its present form. The castle is surrounded by a moat and is open to tourists. Its unusual checkerboard facade is a result of alternating blocks of white limestone and brown sandstone. (Steve Mraz / S&S)

Jehay Castle in Amay, Belgium, dates to the 16th century in its present form. The castle is surrounded by a moat and is open to tourists. Its unusual checkerboard facade is a result of alternating blocks of white limestone and brown sandstone. (Steve Mraz / S&S) 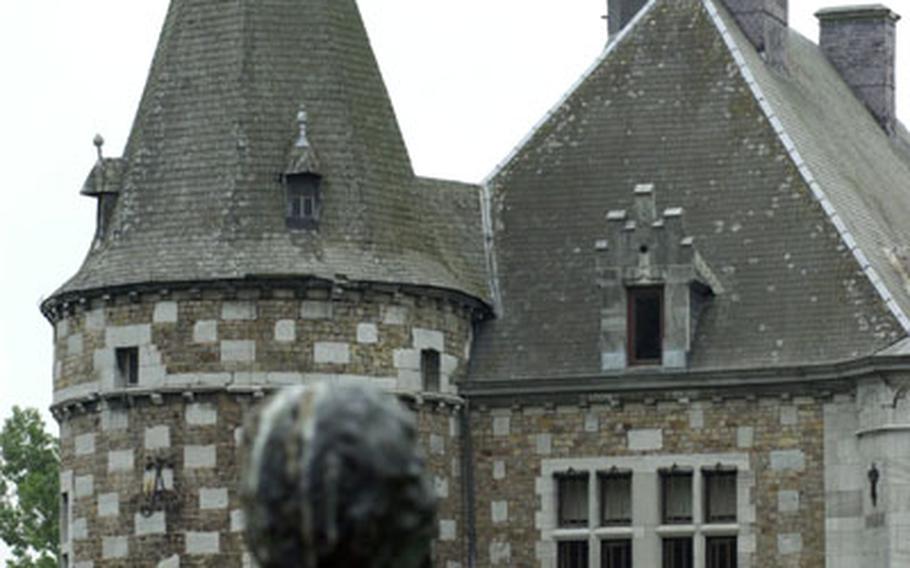 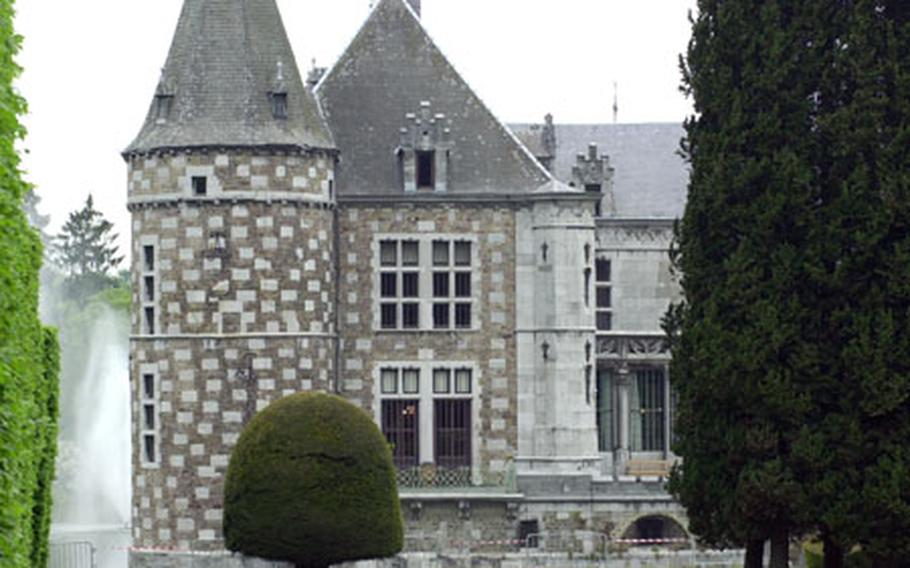 A view of Jehay Castle in Amay, Belgium, from its gardens. (Steve Mraz / S&S) 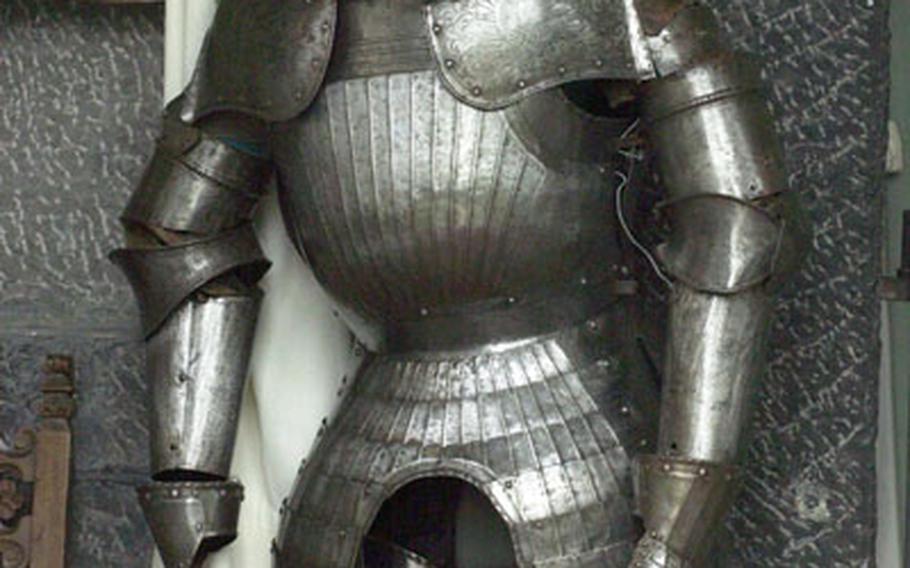 A suit of armor stands guard at Jehay Castle in Amay, Belgium. The castle is filled with fine valuables such as paintings, antique furniture and tapestries. (Steve Mraz / S&S) 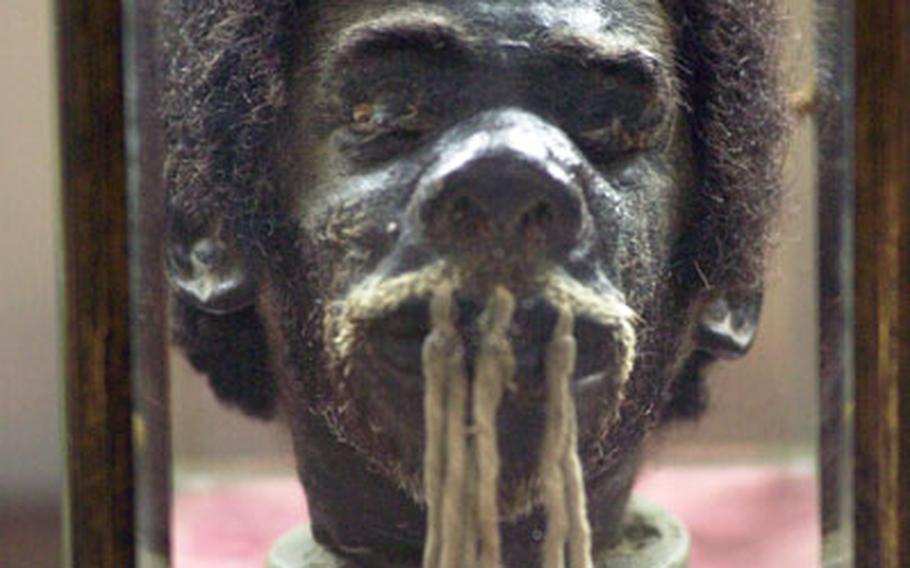 A genuine shrunken head awaits visitors inside Jehay Castle, The head was a gift to a former owner of Jehay from an Australian friend. (Steve Mraz / S&S)

In addition to its unique exterior of checkerboard stonework, Castle Jehay in Amay, Belgium, possesses a blend of exquisite and bizarre artwork.

The moated castle has a checkerboard facade resulting from a combination of white limestone blocks alternating with brown sandstone rubblestone.

Walking onto the castle grounds, you&rsquo;re greeted by views of arches, bridges and spires. It&rsquo;s all typical of what you&rsquo;d expect in a castle.

But then you catch a glimpse of something odd. You might think your eyes are playing tricks when you see an outdoor statue of a naked woman behind a praying mantis that&rsquo;s eating a man&rsquo;s head.

It&rsquo;s not an illusion, and it&rsquo;s only the beginning of the odd outdoor art that dots the landscape in the Castle Jehay gardens. Without getting overly specific, let&rsquo;s just say there are more than a few statues of naked women sitting in very unladylike positions.

After purchasing an admission ticket, visitors enter an adjacent room that has kiosks explaining the history and layout of Jehay in multiple languages. Instead of buying a book that has most of the same information, take advantage of the free kiosks.

The castle dates to the 12th century, and it has existed in its present form since the 16th century. During and after World War II, it was used as a children&rsquo;s home and fell into disrepair. But the property was returned to Count Guy van den Steen a few years after the war, and he and his wife restored and refurnished the castle.

Now that you&rsquo;ve gotten smart on Jehay, it&rsquo;s time to venture into the castle rooms. You&rsquo;ll have to pass by the aforementioned praying mantis statue, so don&rsquo;t say you weren&rsquo;t warned.

You&rsquo;ll likely notice two suits of armor near where your entrance ticket is punched. From here, you can explore the castle&rsquo;s ground floor. Inside the rooms, there is rare furniture and beautiful tapestries. The old-world craftsmanship visible through every doorway is astounding.

In the castle&rsquo;s smoking room, a wide variety of silverware is on display. So, too, is an authentic shrunken head that was given to the castle&rsquo;s last owner by an Australian friend. The apple- sized head even has its lips sewn together.

After touring the castle&rsquo;s roughly half-dozen rooms, head outside for a stroll in the gardens and to take pictures of the castle. Cross the small bridge at the rear of the castle and veer right for perfect views of its facade and moat. Then wander around the gardens to inspect the flora and the bizarre statues.

One warning: While there are fantastic views from the parking lot of the small church in front of Jehay and the water that surrounds the castle, don&rsquo;t attempt to walk along the road to get a picture of the castle. One reason is that cars whip around the blind corner; another is that the trees and shrubs along the road prevent you from getting that postcard-perfect picture. Wait until you get to the castle gardens to take your photos.

Directions: From Ramstein, the drive to Castle Jehay is about 2&frac12; hours. Take Autobahn 62 to A1 to A60/E42. From E42, get on E40, then take exit 5-Saint- Georges for N614 toward Amay/Saint-Georges-sur- Meuse/Verlaine. Follow signs to Amay and Castle Jehay. From Mons, take Auto-route 15 toward Li&egrave;ge, exit at N60 and go south to the intersection with N617 near Huy. Follow N617 east to Amay. For GPS purposes, the address is Rue du Parc 1, Amay, Belgium, 4540.

Times: The castle is open to individuals from May 1 to Sept. 30, 11 a.m. to 6 p.m. on Saturdays, Sundays and public holidays, and 2 to 6 p.m. Tuesday to Friday; closed Mondays. The last visitors are admitted one hour before closing. Groups may visit every day (except Mondays) from now until Oct. 31.

Costs: Admission is 5 euros for adults, 2.50 euros for ages 6-18 and free for those younger; group rates are available. Guided tours cost 40 euros with a maximum of 25 people.

Food: None at the chateau. There are restaurants between the autoroute and the castle.