Alpswitze: One lone, stubborn hiker against the mountain 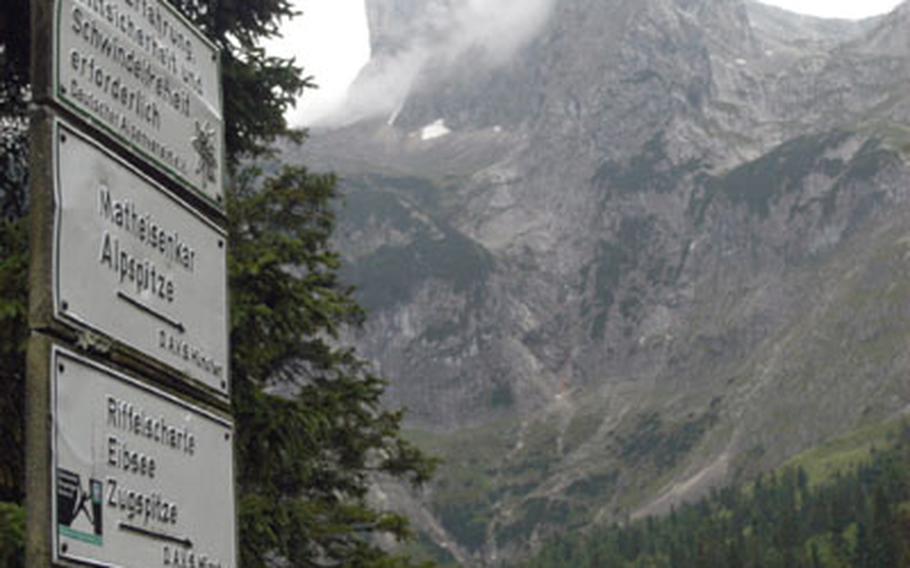 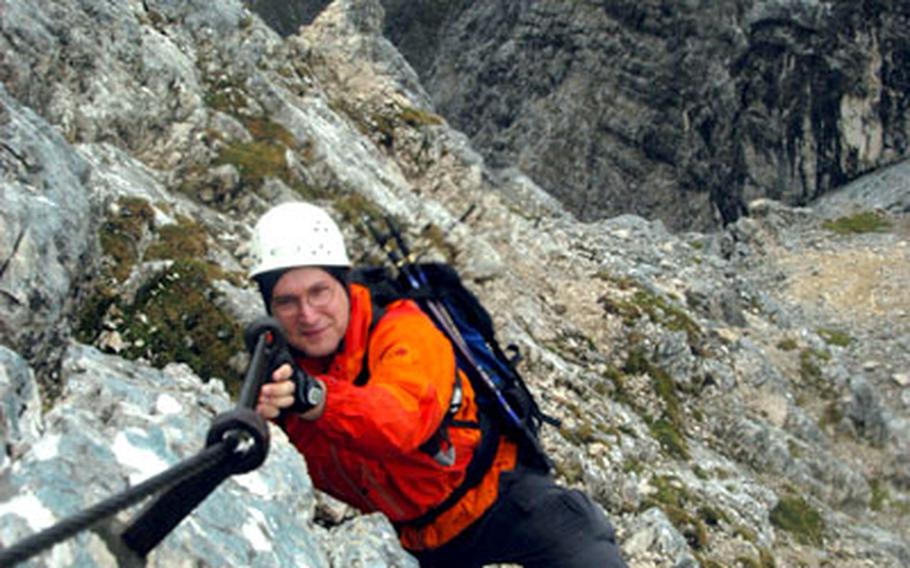 Helmut Grüninger, a weekend warrior from Munich, uses steel cables to climb up the peak of the Alpspitze Mountain. Guides recommend using a helmet and harness to clip into the steel cables for safety during the steep and rocky climb to the top. (Russ Rizzo / S&S) 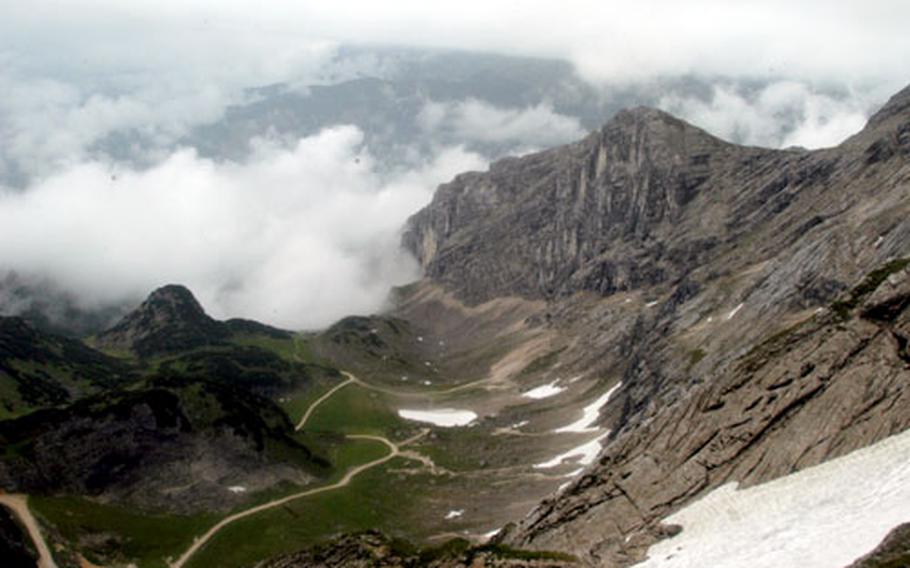 The view from the backside of the Alpspitze peak, at about 6,500 feet. Fog hurts visibility but not the sense of accomplishment after this rigorous climb. (Russ Rizzo / S&S)

Rain and fog aren&rsquo;t the best conditions for a hike, but I wasn&rsquo;t about to let that stop me from conquering one of Germany&rsquo;s highest mountains during a recent trip to Garmisch. Especially not after wind canceled my plans for paragliding for two days straight.

By Alps standards, the Alpswitze is a fairly small mountain, at 8,600 feet. But it&rsquo;s a monster compared with most mountains in Germany, where the highest peak, the adjacent Zugspitze, is just another 1,000 feet.

In preparing for the hike, I was warned that getting to the top was a perilous task, ill-advised for someone on his own and without his own mountaineering gear. I was told that temperatures dipped, especially on rainy and cloudy days like the one I chose.

I took the dire warnings to heart, but opted against renting a harness and helmet to reach the top. I decided I would climb to the base of the peak and turn around, defeated but still alive.

At the advice of a local hiker, I began in Hammersbach, a small town next to Garmisch. The hike started off innocently enough, with stairs of wooden beams leading up to a gravel path overlooking a stream. The trail got rougher as I made my way through the Hollental Gorge.

Taking a steady, leisurely pace, I made it to the first marker, a mountain hut serving food and beer, in about two hours. The hut marks the halfway point to the top of the Alpswitze, which is an important consideration for hikers with short supplies.

But be careful not to get too confident about the gentle hike to that point. It gets steep fast.

Just after the hut, the trail begins to resemble the rocky, steep trails of the Dolomites in Italy. Garmisch and surrounding towns shrink to obscurity in the valley below.

After an hour of snaking trails, stairs appear, marking the end of the second stretch and the base of the peak.

This is where the hike gets fun. It is also where I planned to make my way back down. Thankfully, I met a hiker from Munich who convinced me that the climb to the top wasn&rsquo;t as bad as I had been told.

Turns out, my new friend, Helmut Gr&uuml;ninger, was right. The trail to the top was rough and steep, but it wasn&rsquo;t deadly. It was an adult playground, complete with ladders and steel cables to latch onto while traversing unstable rock.

Gr&uuml;ninger lent me his harness, used to latch onto steel cables during steep ascents. But I found the cables weren&rsquo;t necessary for a hiker with a decent sense of balance and no fear of heights.

One warning that did prove correct: The temperature did drop quite a bit at the top. I was happy to have a long-sleeved shirt handy, and wished I had gloves to protect my hands from the cold steel cable. The fog remained, eliminating views that Gr&uuml;ninger told me were spectacular.

But despite the weather, I conquered the Alpswitze. And I lived.

In my book, that&rsquo;s a good day in the mountains.