Alps: When the cows come home, it's party time 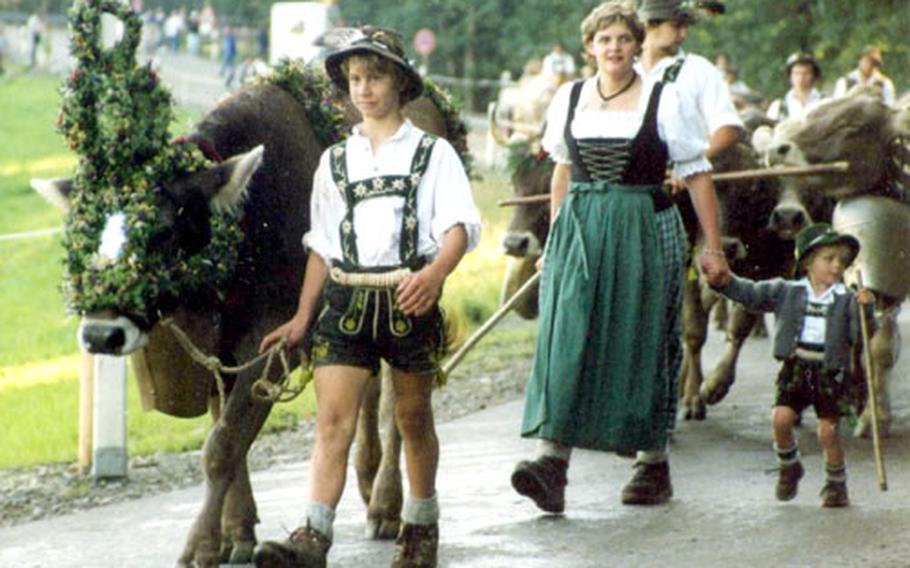 The whole family gets dressed in their finest Bavarian attire to participate in the Viehscheid festivities. (Leah Larkin / Special to S&S)

The whole family gets dressed in their finest Bavarian attire to participate in the Viehscheid festivities. (Leah Larkin / Special to S&S) 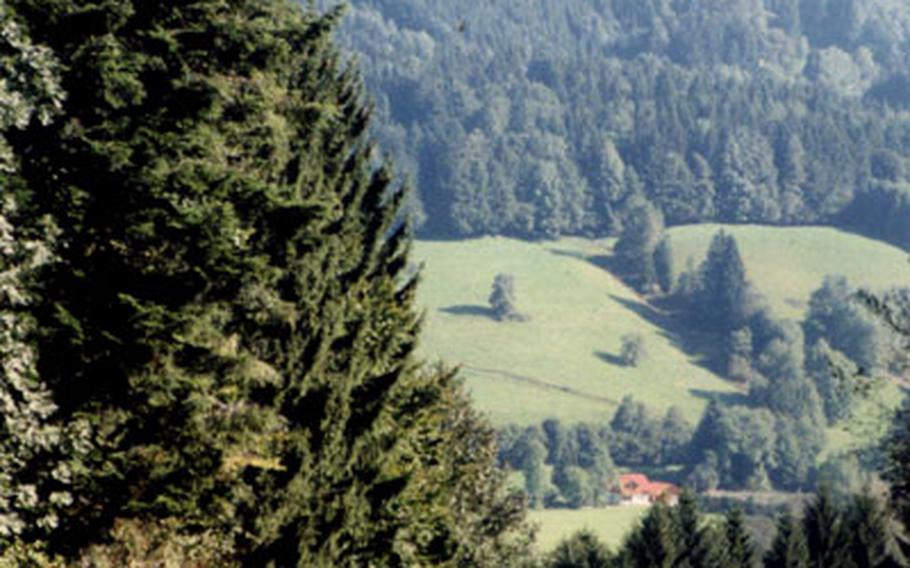 After spending the summer high in the mountains, cows are driven down into the valley, which is cause for a traditional and colorful celebration called the Viehscheid in Germany. (Leah Larkin / Special to S&S) 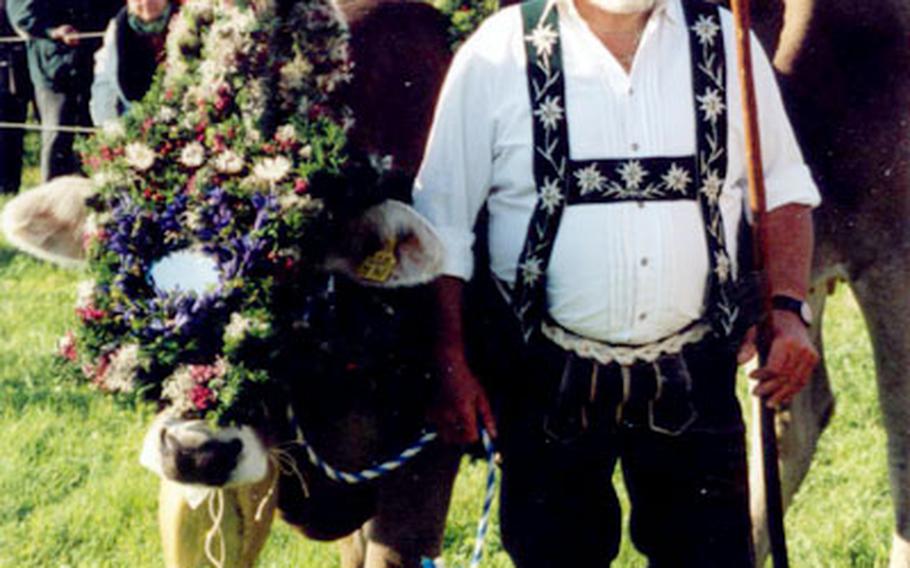 Some of the headdresses worn by the include a mirror to ward off evil spirits. (Leah Larkin / Special to S&S) 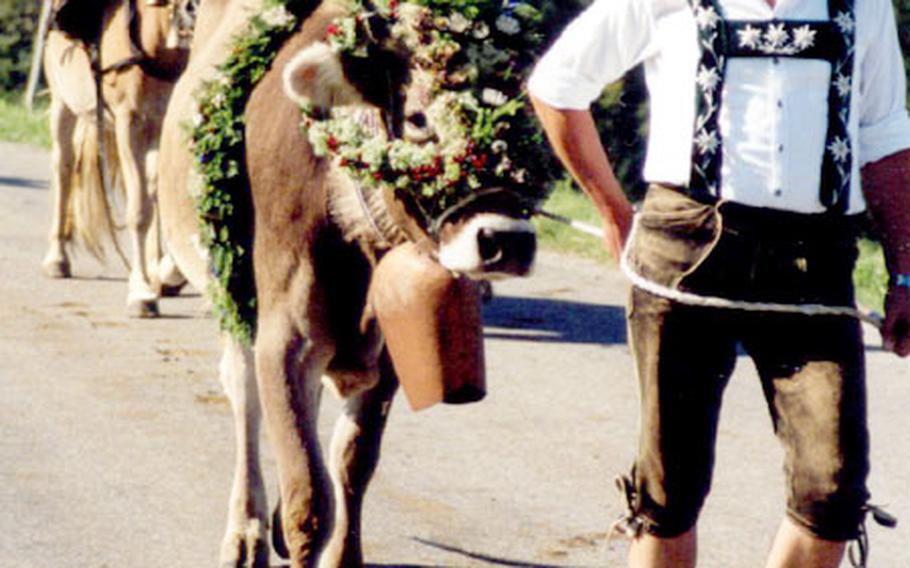 The gets the honor of wearing especially elaborate décor at the Viehscheid, a traditional folklore festival in the village of Weissach in southern Germany’s Allgäu region. (Leah Larkin / Special to S&S) 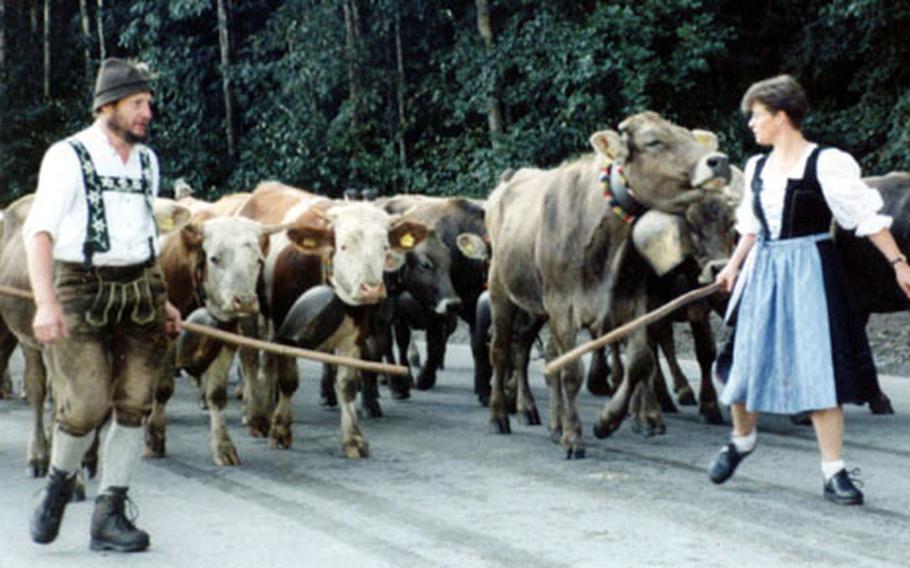 Keeping the cows together as they make their way down the mountain is not always easy. (Leah Larkin / Special to S&S)

A large jovial crowd, many attired in lederhosen or dirndls, gathered outside the beer tent. All eyes were on the mountain road. Soon they shouted and pointed. Rounding a bend up in the hills marched a procession of cows and herders. Bells clanged. The crowd cheered.

The animals came closer and the clanging grew louder. The herdsmen worked the cattle with their staffs to keep them on track down into the valley.

It was the Viehscheid, a traditional folklore festival in the village of Weissach in southern Germany&rsquo;s Allg&auml;u region, when the cattle are driven from mountain pastures back to the valleys. The fun and lusty celebration went on for several hours as some 1,000 cattle paraded down the mountain.

The cattle, many decorated with elaborate wreaths and headdresses of greenery, flowers and ribbons and all wearing huge bells, were divided into groups by ownership. Franz Meisburger&rsquo;s cows, a group of 70, were the first down at 8:40 a.m.

In Germany&rsquo;s mountainous Allg&auml;u, in parts of Switzerland and Austria, the cows are feted in the fall when they return to the valleys after spending summers high up in Alpine pastures where herdsmen live in huts near their charges.

Peter Berg, a local who came by to &ldquo;have a small beer&rdquo; and watch the festivities, explained that Viehscheid means separating the cattle. The animals from different owners mingle throughout the summer, but each has a tag in its ear, which identifies to whom it belongs. Before returning to the valley, the cows are separated into the appropriate groups.

A dirndl-clad woman carrying a sign with the name of the owner precedes each herd in the parade. Children wearing traditional garb are often by her side. Then come the cows and the herders, also dressed in local costume. A happy bunch, they skip, bounce and run down the mountain as they celebrate the end of a successful summer.

One cow from each owner&rsquo;s herd is chosen to be the Kranzkuh (wreath cow) and wears an especially elaborate headdress. It&rsquo;s usually a good-looking specimen who is docile enough to tolerate the huge decoration around its head and neck. Many of the colorful wreathlike headgear include a small mirror to ward off evil spirits.

If misfortune has befallen a group of cows during the summer, such as a death or injury, that owner is not permitted the honor of having a Kranzkuh in his herd. At Weissach, of the 14 herds that paraded, only one was minus a Kranzkuh. All of the cattle are weighted down with an enormous bell, and many are decorated in greenery. Some groups even have a few goats or horses mixed in with the cows.

There are pauses between the appearance of the herds, time to browse the numerous souvenir stands selling everything from cow bells and stuffed cows to Bavarian scarves and socks, wooden shoes with cow hide and fur, even wooden crucifixes. Drinking and eating seem to have a greater appeal, however, as the beer tent, complete with oom-pah band, is always packed. And, the fest-goers, in true Bavarian fashion, drink their beer in Mass mugs, which hold a liter of the golden liquid.

Berg said the Viehscheid used to be a fest just for the locals, but its popularity has grown and now visitors come from all over Germany.

&ldquo;But we try to keep it at the same level. We want to keep to its roots,&rdquo; he said.

Where to find the festivals ...

Here is a list of festivals honoring the return of cattle &mdash; and sometimes sheep &mdash; from the mountain pastures in Switzerland, Austria and Germany this fall.

The following festivals, most involving dairy cattle, are in Allg&auml;u in southern Germany. Find more at www.allgaeu.info.

In Switzerland, the celebrations are called D&eacute;salpe, and it&rsquo;s dairy cattle that come down from the mountains. They generally begin their descent in the morning, but the festivities in the villages continue throughout the afternoon. Learn more at www.MySwitzerland.com.

Sept 24: Charmey (Gruy&egrave;re region). This is said to be the best and most typical of the Swiss D&eacute;salpes; Grimentz in Valais; St. Cergue in the Swiss Jura

In Austria, the festivities are called Almabtriebe and they abound in the mountain villages of Tirol. The cattle, some dairy but mostly beef, are primarily young. They return to meadows in the valleys after their summer in the heights. Sheep are the stars in some of the festivals. Learn more at www.tirol.at.