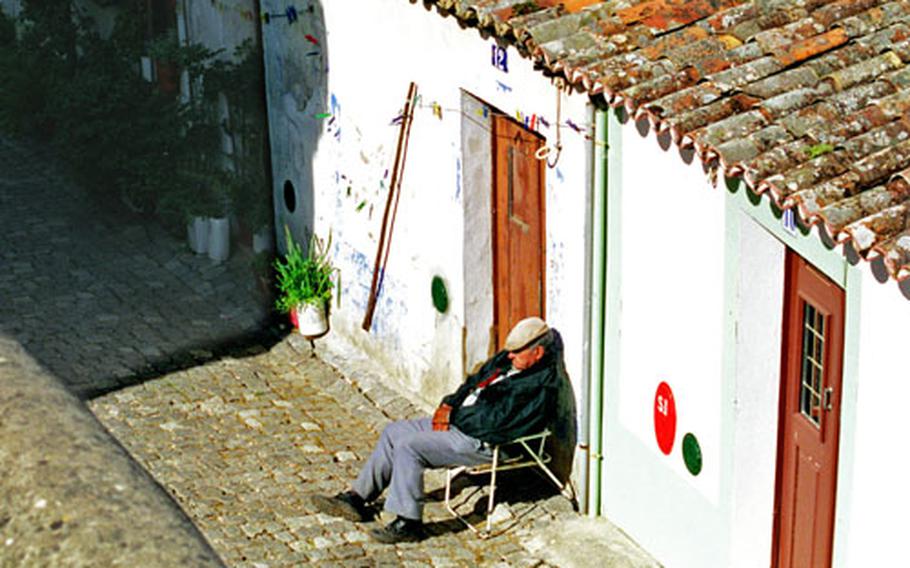 Siesta time in Olho, a town in Portugal&#39;s Algarve region near the entrance to the Ria Formoso National Park. (Peter Jaeger / S&S)

Siesta time in Olho, a town in Portugal&#39;s Algarve region near the entrance to the Ria Formoso National Park. (Peter Jaeger / S&S) 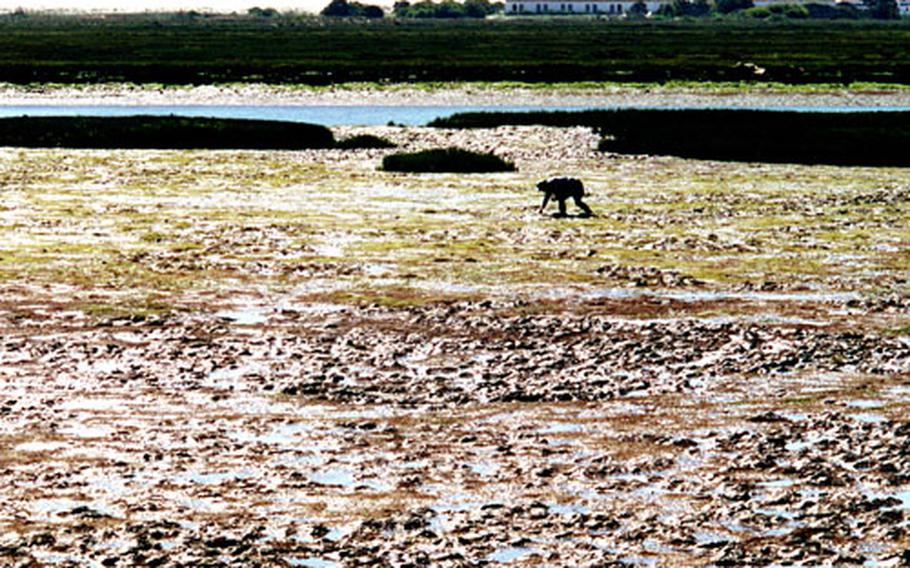 A local person collects mussels at low tide ar the Ria Formoso Natural Park. This landscape is typical of the park in the eastern Algarve, with marshlands and dunes facing the Atlantic Ocean. It is home to countless birds and several Portuguese water dogs that have a special place to exercise. (Peter Jaeger / S&S) Anchors from a former sardine fleet rest on sand dunes at the Ria Formosa National Park in Portugal. The ships were used to fish off the coast near Tavira — a task once made easier with the help of Portuguese water dogs. (Peter Jaeger / S&S)

Listen closely when you enter the Ria Formosa Natural Park in Portugal&rsquo;s eastern Algarve and you&rsquo;ll likely hear the barking of dogs in the distance. It&rsquo;s the sound of a national treasure at play.

In the center of the national park east of Faro, the Algarve&rsquo;s leading city, Portuguese water dogs out for a romp welcome visitors five days a week. While Bo, the Portuguese water dog adopted by the Obama family, has made a significant imprint on the global consciousness across the Atlantic, Bo&rsquo;s Portuguese cousins frolic in semi-anonymous bliss in the Ria Formosa park near the waters where their ancestors helped fishermen hunt down their daily catch.

Every weekday, dog breeder and trainer Carla Peralta takes four or five of her dogs &mdash; also known as Porties or PWDs &mdash; to romp in a specially designated chunk of the park. Although the property is often referred to as a breeding center for these amiable poodle look-alikes, Peralta neither houses nor breeds them there.

What she does is exercise them on several acres of land and allow them to "meet and greet" the public. For four hours a day, visitors can interact with the web-toed canines, watch them bound across the overgrown greenery and listen as Peralta or a volunteer assistant talks about the idiosyncrasies of the breed.

Bo, with his shaggy black mane, white boots and ruff, has raised the profile of the PWD, and of Peralta, who is suddenly getting phone calls from journalists and Portuguese water dog fans from around the world. She is featured on a multitude of Web sites.

She said she sees a sharp increase in the number of people who want to breed the Portuguese water dog, or cao d&rsquo;aqua portugues, since the Obamas&rsquo; decision to add Bo to the first family. But, she cautions, that is not necessarily a positive thing.

"That is not good," she said in a telephone interview. "People want to breed them just to make money. It&rsquo;s crazy. That&rsquo;s what worries me."

The dogs, according to the Portuguese Water Dog Club of Great Britain, were originally bred to assist fishermen by retrieving tackle that fell overboard, rounding up fish that escaped from a net or off a line, serving as a lifesaver or even a messenger between boats. The breed is a strong swimmer and can dive underwater, but the dogs no longer go fishing.

Peralta currently has 12 PWDs, whose ages span several generations. At the time of our interview, some of the dogs were participating in a local festival in Olhao, a fishing town near the Ria Formosa park. PWDs love activity, and Peralta keeps hers busy by training them to rescue victims of natural disasters and putting some to work helping emotionally and mentally disturbed children develop social skills.

While her enterprise is small, Peralta and her dogs are well-known throughout the Algarve. Tourist offices keep her cell phone number handy, and local bus drivers can tell you the right stop to get off if you want to visit.

So far, those coming to see the dogs are still primarily Portuguese. "Like everywhere else, tourism is down in Portugal, and we don&rsquo;t see more visitors in the park than before," she says.

On our pilgrimage to see the dogs, we took a local bus from the town of Tavira to the outskirts of Olhao and walked about 15 minutes through a residential neighborhood to the park entrance. The dogs&rsquo; domain is a further 10 minutes&rsquo; walk inside, and their barking &mdash; playful, a bit gruff &mdash; will guide you along the walkway.

On the day of our visit, Peralta was away, but her husband greeted us warmly and introduced us to three PWDs, with mops of thick, wavy, dark hair, and a fellow canine companion of another breed. The water dogs were friendly, but clearly their minds were focused on play, and on bounding, even galloping, with unremitting joy through the greenery as a pack. Every few minutes, they returned to nuzzle our hands and get a drink &mdash; then they were off again.

They love their space, and they love their humans &mdash; so much so, breeders say, that they always want to be with them and become destructive when left alone for long periods of time.

Visiting them in their natural environment is an almost mystical experience; they seem so free and so comfortably at home in their coastal parkland, watched over by the storks and other winged creatures who also have free range of the land.

Given a choice, Bo might even prefer the Ria Formosa spread to the White House lawn.

DeeDee Doke is a freelance writer based in England.

&bull; Admission to the park is 2.50 euros. There is no extra charge to see the Portuguese water dogs, but visitors may make donations.