Albi, France: Relative of Toulouse-Lautrec shows chateau he visited as a child 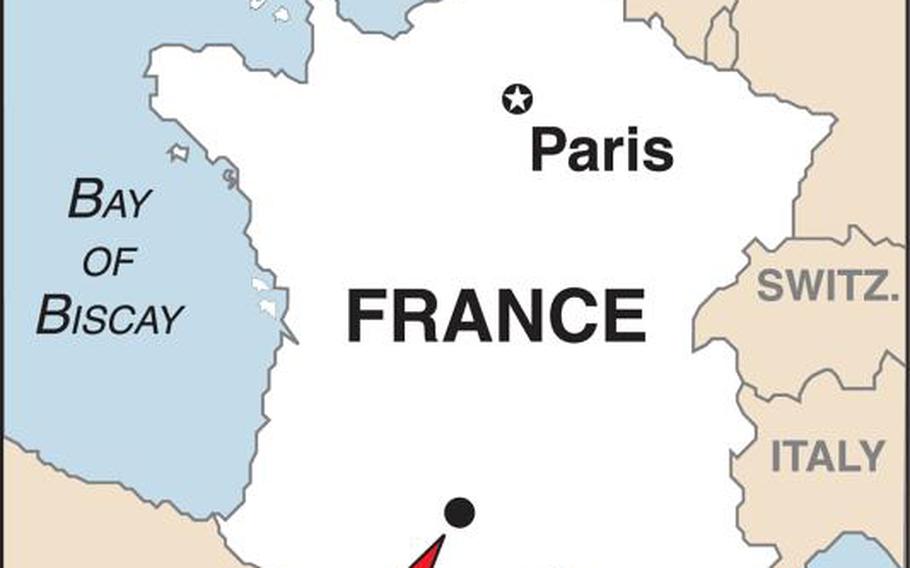 Charming old bridges and the majestic Ste. C??cile Cathedral combine for a postcard-perfect image of Albi, France, as seen from the Hotel Mercure. Albi is the birthplace of artist Henri de Toulouse-Lautrec. (Leah Larkin/Special to Stars and Stripes) The buildings of Albi, France, are made of a red brick that is characteristic of this part of France. (Leah Larkin/Special to Stars and Stripes) 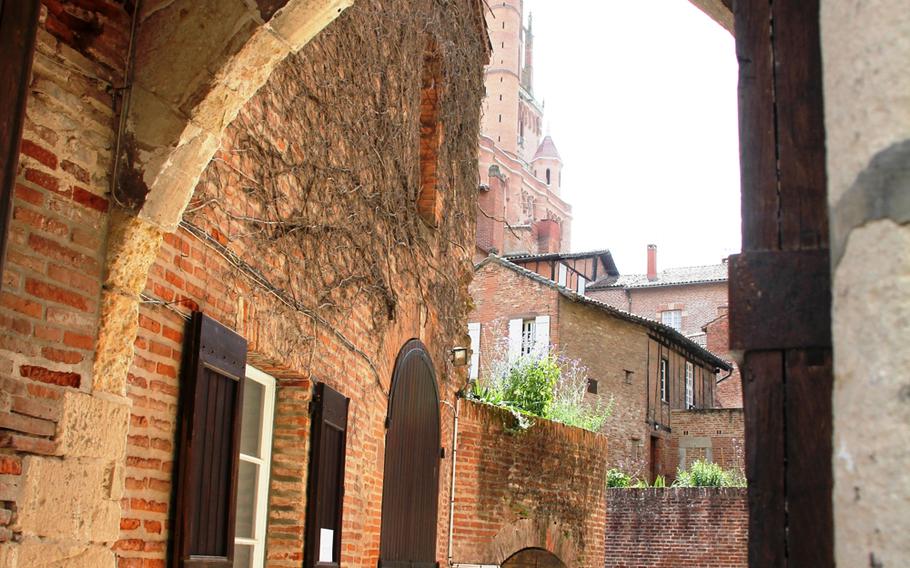 The old districts of Albi, France, are a delight to explore. (Leah Larkin/Special to Stars and Stripes) A picturesque courtyard in the town of Albi, France. (Leah Larkin/Special to Stars and Stripes) 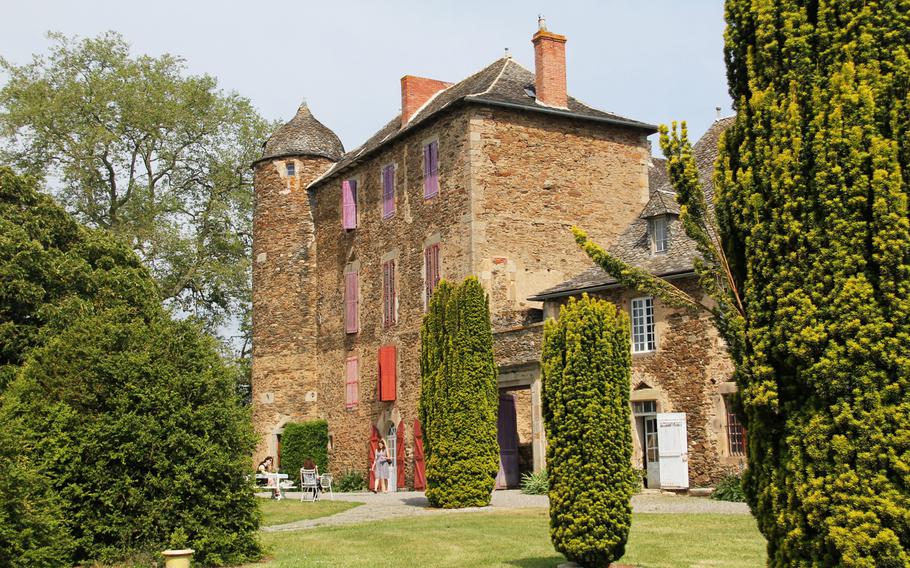 Chateau du Bosc and its garden, in the Midi-Pyrenees region of southwestern France. Young Henri de Toulouse-Lautrec spent summers with his family in the medieval chateau. (Leah Larkin/Special to Stars and) 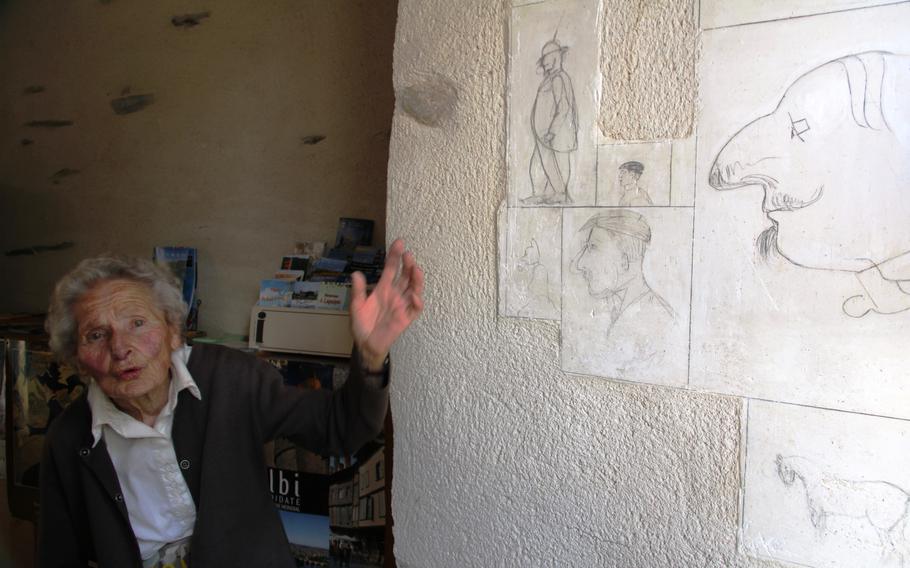 Henri de Toulouse-Lautrec's artwork adorns a room of the Toulouse-Lautrec Museum in Albi, France. The artist was born in Albi and this year marks the 150th anniversary of his birth. (Leah Larkin/Special to Stars and) A hallway of the 13th-century Palais de la Berbie is busy with visitors viewing its works of art. The palace, home to the Toulouse-Lautrec Museum, also houses ancient art, archaeological pieces and modern art. (Leah Larkin/Special to Stars and Stripes) A visitor takes a peek into the Louis XVI room at the Musuem of Miniatures in Albi, France. The museum houses 55 miniature rooms, all made by a woman, now 79 years old, who started the project 40 years ago. (Leah Larkin/Special to Stars and Stripes) Albi's Ste. Cecile is the largest cathedral in the world constructed of bricks and is also the only cathedral in France that is still completely painted with the original 15th-century paint still intact. The paint survived here because the cathedral is very dark. (Leah Larkin/Special to Stars and)

It was two days before her 89th birthday, but she had the vitality of someone much younger. Tiny, frail and slightly hunchbacked, she charged up the long staircases as we followed. Nicole-Berangere Tapie de Celeyran is a distant cousin of the famous post-impressionist painter Henri de Toulouse-Lautrec.

This year marks the 150th anniversary of the birth of the artist whose cabaret posters have become synonymous with Paris and Montmartre, the area of Paris famous for its bohemian lifestyle and the haunt of artists, writers and philosophers in the late 1800s.

Tapie de Celeyran’s passion is giving tours of her home, Chateau du Bosc in the Midi-Pyrénées region of southwestern France. The young artist spent summers with his family in the medieval chateau whose centuries-old furnishings and decor are still intact. She led us from the kitchen, where she pointed out Toulouse-Lautrec’s sketches on the wall, upstairs to a lavish salon and dining room, a bedroom, hallways and then into the garden. She had plenty to tell us about her famous relative, stories passed on from her grandmother and other ancestors who knew the artist.

“I love to talk. I want to preserve this house, the spirit of the family,” she said. She also wants the opportunity to show Toulouse-Lautrec mementoes and correct misconceptions about the legendary artist.

Toulouse-Lautrec’s father and uncles often went hunting. They’d come back after an outing and relate tales of their adventures. Young Toulouse-Lautrec would sit on the floor, using coal from the fireplace to make drawings of their exploits, she said.

In his bedroom, the floor scattered with toys, she pointed out a boat he had made after his accident. He was a sickly child who fractured both thigh bones in falls at the ages of 13 and 14. The breaks never healed properly, and his legs stopped growing. She showed us marks on the wall in one room where his height had been recorded each year. It stopped at 1 meter 52 (4 feet 9 inches). In another room she pointed out menus that Toulouse-Lautrec, who was passionate about cuisine, had embellished with his drawings.

It was all fascinating, especially told by this delightful and amazing woman, and perfect background for a visit to the Toulouse-Lautrec Museum in the nearby town, Albi, where the artist was born in 1864. He was an alcoholic and died at the age of 37 from complications of alcoholism and syphilis.

More than 1,000 of his works — paintings, lithographs, drawings, as well as the famous posters, most donated by his family — are on display in the Albi museum, which has the largest collection of his works in the world.

“What is important in a painting is the person. Landscape is secondary. That was his philosophy,” a museum guide said. He painted psychological portraits, and he understood advertising, hence the posters, she explained.

The museum is housed in the Palais de la Berbie, built in the 13th century next to Albi’s cathedral, and to serve as a residence for the city’s archbishops. In addition to the Toulouse-Lautrec collections, the museum has works of ancient art, archaeological pieces and modern art.

Albi is a UNESCO World Heritage site perched on the banks of the Tarn River, which is spanned by an 11th century bridge. With the spires of its mighty cathedral dominating the skyline, it almost seems too picture-perfect.

It was in Albi during the 13th century that a crusade was launched against the Cathars, heretics who had developed their own version of Christianity, which was viewed as a threat to Catholicism. Many were burned at the stake. Until this time this part of France had been virtually independent. After the Albigensian Crusade, it was annexed by the French crown. The building of the city’s great cathedral got underway at the end of the century and went on for some 200 years.

The cathedral, Ste. Cécile, is the largest in the world constructed of bricks; it is also the only cathedral in France that is still completely painted with the original 15th-century paint still intact. During the Middle Ages, the interiors of churches were painted, although the paint in most of them has long since vanished. It survived here because the cathedral is very dark. The architecture is southern Gothic, a style unique to this part of France, with no flying buttresses, columns or transept.

Another Albi attraction is the city’s Museum of Miniatures. Fifty-five miniature rooms are to be admired, all made by a 79-year-old woman who started the project 40 years ago. As a child she wanted a doll house, but she never got one. So, at 39, she set out to make her own. It takes her from six months to a year to make one room. Down to the minutest detail — silverware next to the dinner plates on the tables, for example — the rooms are a marvel.

See the sights, then wander around the pleasant town. The old districts are full of medieval splendor — narrow lanes with ancient brick and half-timbered houses, flower-bedecked courtyards, Renaissance mansions.

Leah Larkin can be contacted through her website, www.leahlarkin.com, or blog address, www.talesandtravel.com.

Albi, France Getting there Albi is 50 miles northeast of Toulouse, France’s fourth largest city and the capital of the Midi-Pyrénées region. There is train service between the two cities.

AccommodationsThe Hotel Mercure Albi Bastides on the banks of the Tarn River has the perfect location for admiring — and photographing — the city. The hotel building, classified as a historic monument, was previously a water mill. Its riverside terrace is ideal for outdoor dining. See www.mercure.com/Albi.

More information Chateau du Bosc is located in the town of Naucelle, 30 minutes by car from Albi. Nicole-Berangere Tapie de Celeyran gives guided tours in French only, but tours in English by other staff members who know all about Lautrec are offered year round from 10 a.m. until 7 p.m. If you visit, you are sure to meet Tapie de Celeyran, who loves to welcome visitors. Telephone: (+33) (0)5 65 69 20 83.