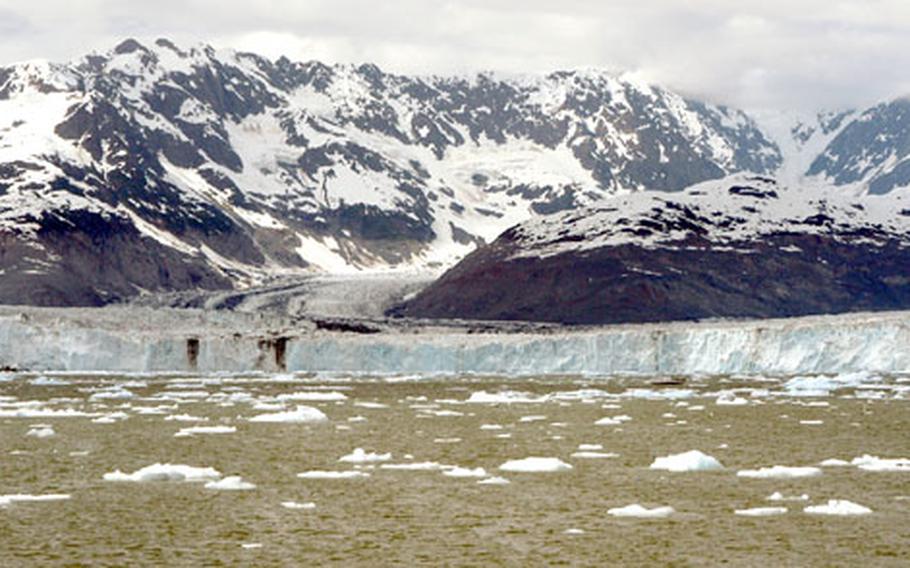 A view of Columbia Glacier from about three miles out. The glacier has greatly receded in the past several years, and the ice floes made it too dangerous for the Glacier Spirit to get much closer. (Michael Abrams / S&S) 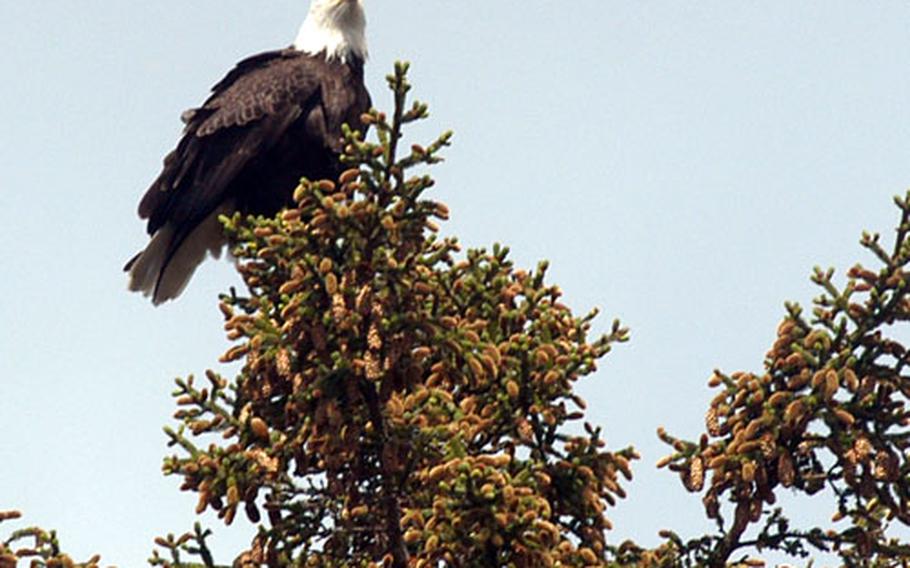 A bald eagle in Valdez, Alaska, may be ho-hum about the tourist boat that is passing by, but the humans aboard the Glacier Spirit are fascinated by him. (Michael Abrams / S&S) 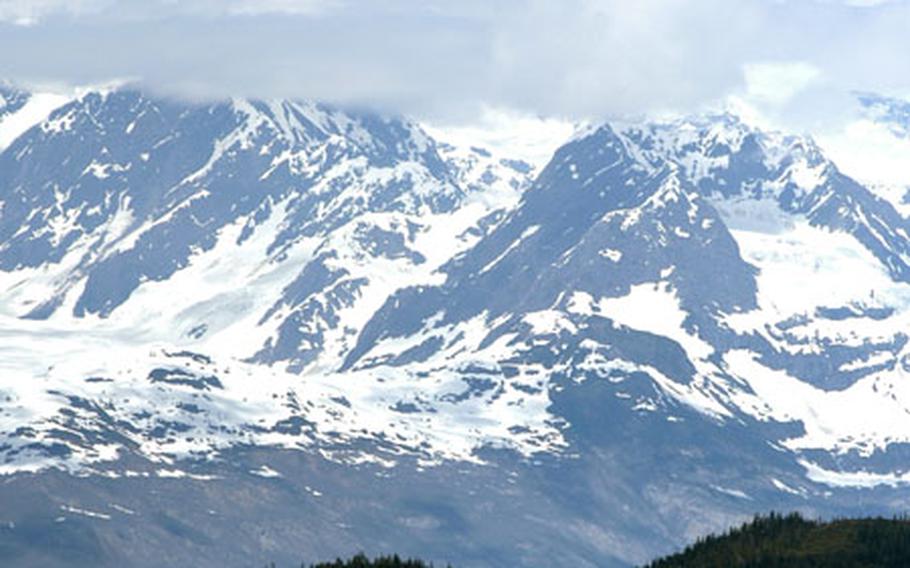 Snow-capped mountains and ice floes were part of the scenery on the Columbia Glacier cruise from Valdez, Alaska. (Michael Abrams / S&S) 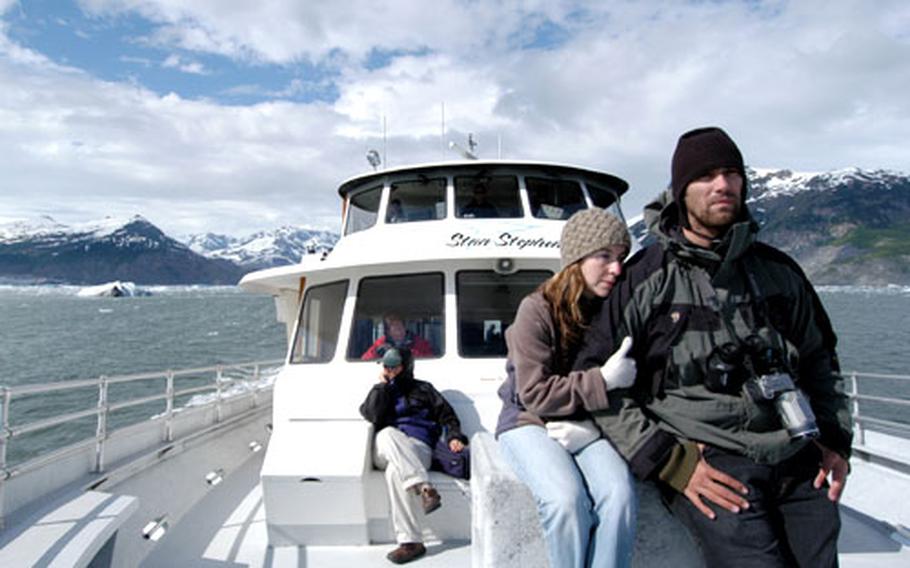 On the deck of the Glacier Spirit as it makes its way through Prince William sound, a couple find the glacial chill a good incentive for huddling close. (Michael Abrams / S&S)

The air was cold, chilled by the giant glacier a couple of miles away. With scores of ice floes surrounding the cruise ship Glacier Spirit, the captain said he would have to make his way carefully up the bay toward Alaska&rsquo;s Columbia Glacier.

With that, he throttled the engine and sped through the ice. &ldquo;If he has to be careful, why is he speeding up?&rdquo; one slightly frightened passenger asked her husband.

If you are afraid of icebergs, a Columbia Glacier cruise might not be for you.

Actually, the Glacier Spirit is well equipped with modern technology to keep track of the dangers on the surface and in the deep. The ship is one of three operated by Stan Stephens Glacier & Wildlife Cruises, out of Valdez, and we were at the highlight of its seven-hour Columbia Glacier cruise.

We had boarded the 80-foot vessel at the Valdez harbor late in the morning and headed out through Valdez Bay, past the Trans-Alaska Pipeline terminal. There were none of the giant oil tankers in port, but a bunch of sea otters frolicked in the bay. The captain slowed down, and we drifted past the animals, the largest members of the weasel family in North America. Most of them were floating on their backs, grooming themselves and enjoying a warm Alaskan sun.

As we made our way up the bay and through the Valdez Arm, a narrows that opens into Prince William Sound, it was time for lunch.

Appropriately for a sea cruise, clam chowder was on the menu (it is included in the price). The meal was interrupted when the captain saw porpoises swimming off to the right, and headed that way. Often porpoises will swim with ships, but alas, today they were uninterested in the boat, and didn&rsquo;t feel like playing.

After lunch, the captain steered closer to shore, where we searched the treetops for that majestic symbol of the United States, the bald eagle. We saw a couple flying near a nest and more in the trees. By the time the cruise was over we had gotten pretty good at spotting their white-feathered heads.

After leaving the Valdez Arm, we headed for Glacier Island and got our first glimpse of Columbia Glacier, far off to the north. Already, bluish ice floes, broken off from the glacier, were swimming on the surface. To the south, what looked like a periscope sticking out of the water, was actually a marker on Bligh Reef, where the Exxon Valdez ran aground in 1989, spilling nearly 11 million gallons of oil into Prince William Sound.

At Point Bull Head on Glacier Island, we spotted a colony of sea lions on the rocks. The noise of their bellowing was incredible. We watched as a giant bull madehis way across the rocks and plummeted into the cool waters.

Farther on, we came across another colony and also saw some of the birds that live here &mdash; cormorants, oystercatchers, terns and pigeon guillemots.

Usually the cruise just skims part of the island&rsquo;s coast before heading toward Columbia Bay. But because of the glorious weather, the captain announced we would sail around the island to the bay.

With a trained eye, he spotted a humpback whale feeding near the shore. After getting as close as possible, the captain let the boat float silently on the surface. We didn&rsquo;t see much of the whale, just a bit of the hump, a shot of water from its sprout, and the flick of a tail.

The captain decided to let it feed, and we continued our voyage around the island, finally arriving at the ice floes of Columbia Bay.

Some of the floes were as big as the boat, others small enough to cool your ice chest. Only 10 percent of the floe bobs above the surface, the other 90 percent is a danger to ships that come too close.

The elements turn the ice into fantastic sculptures as they float out to sea. At the top of one, a bald eagle waited for prey, on another a harbor seal and her pup watched the boat sail by.

The closer we got to the glacier, the more the temperature dropped.

Columbia Glacier was the last Alaskan tidewater glacier to go into retreat. Not long ago, where we bobbed in the sea, about seven miles out, was solid ice. Still, at about 435 square miles, it is Alaska&rsquo;s largest tidewater glacier.

The captain maneuvered the boat through the ice until we were about three miles away. Even from this distance, the wall of ice, more than three miles across and a couple of hundred feet high, was impressive.

Deeming it unsafe to go closer, the captain steered the ship back toward Valdez. We gazed out at the shoreline, spotting a bald eagle or two as we made our way home.

What: Glacier and wildlife cruises leave from the small boat harbor in Valdez, Alaska.

How much: The cruises cost $85 for adults and $42 for children, plus fuel fees that were $3 per person in early June.

For more: Visit the Stan Stephens Cruises Web site for lodging suggestions and descriptions of its Alaska cruises by boat and kayak at www.stanstephenscruises.com.