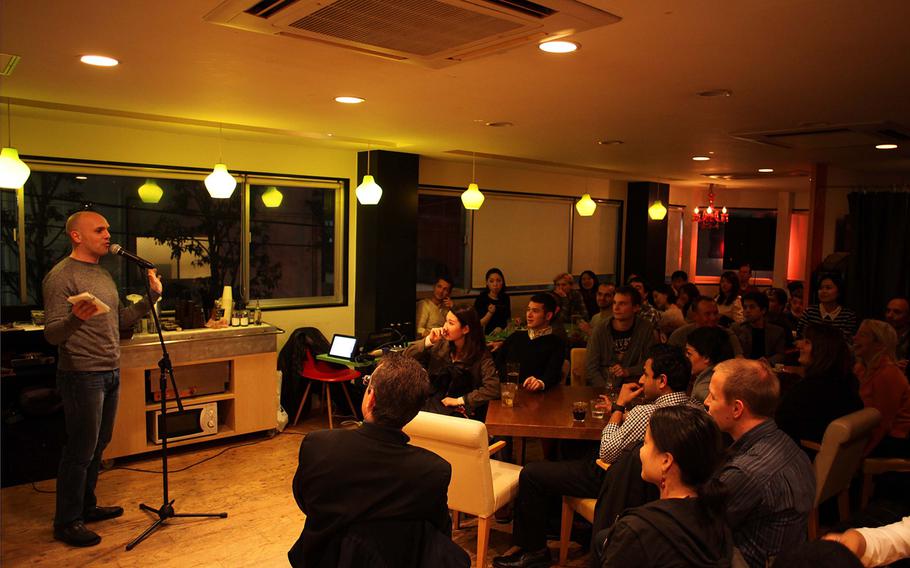 At a recent comedy night at the Double Tall Cafe in Shibuya, Evans Musoka tells jokes in English about growing up in Africa and gaining superpowers. (Trevor Andersen/Stars and Stripes) Jon Sabay, one of the Tokyo Comedy Store improvisers, freestyle raps about suggestions from the audience. ()

Stand-up comedy in English might seem like an odd fit in Japan, but the Tokyo Comedy Store has been entertaining English speakers with stand-up and improv comedy since the ’90s.

In the U.S., comedy like this is usually performed in comedy clubs.

Despite the name, the Comedy Store has no actual building with its name in flashing lights outside. Instead, organizers book several venues every month for their different shows.

During a recent show at the Double Tall Cafe in Shibuya, comedians with freshly written jokes were able to try them out during the New Material Night. Comedians each got three minutes to try their jokes on the audience. Predictably, some bits went over well; others, not so much.

The show was actually broken into two parts: the New Material portion, followed by a round of improvised comedy games from skilled Comedy Store comedians.

All in all, the show was high energy and fully engaging. It was well worth the price of admission ... a drink.

It was surprisingly funny, a review the Comedy Store organizers get so often, they added this line to the website — “Funnier than you think we’ll be.”

New Material Nights are held the first and third Tuesdays of every month at the Double Tall Cafe. But the Comedy Store has several other shows, including stand-up-only shows where top Tokyo comedians do their best material, and Improv-only shows where the best TCS improvisers show off their skills.

For information on other shows or if you’d like to try stand-up or improv yourself, check out their website at www.tokyocomedy.com

Cost: There’s no cover charge, but patrons are required to buy food or a drink once inside.