Across the border: Consider Strasbourg in the morning, then on to Freiburg 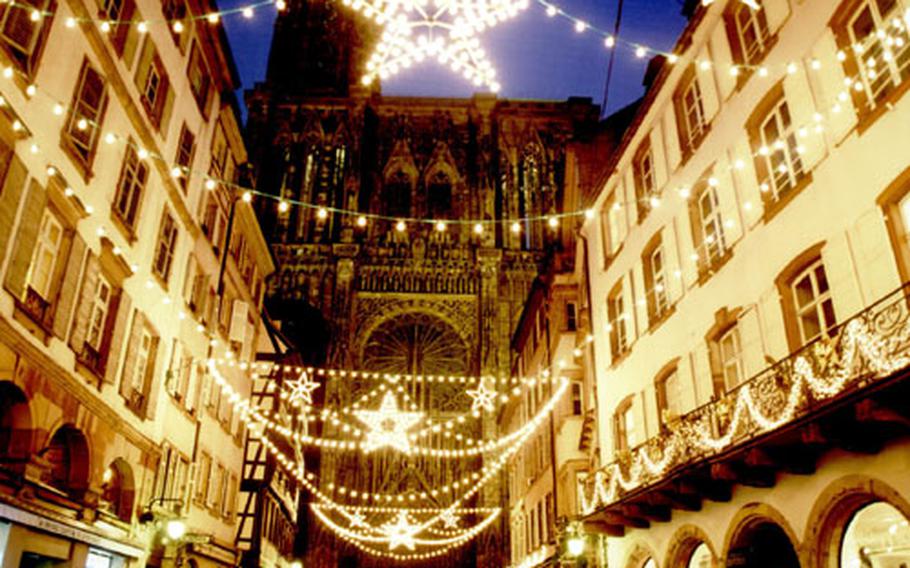 Fairy-light stars adorn the Rue Mercière, which leads toward the illuminated west facade of the Gothic cathedral at the Christmas market in Strasbourg, France. (Photos by Andrew Cowin / Special to S&S)

Fairy-light stars adorn the Rue Mercière, which leads toward the illuminated west facade of the Gothic cathedral at the Christmas market in Strasbourg, France. (Photos by Andrew Cowin / Special to S&S) 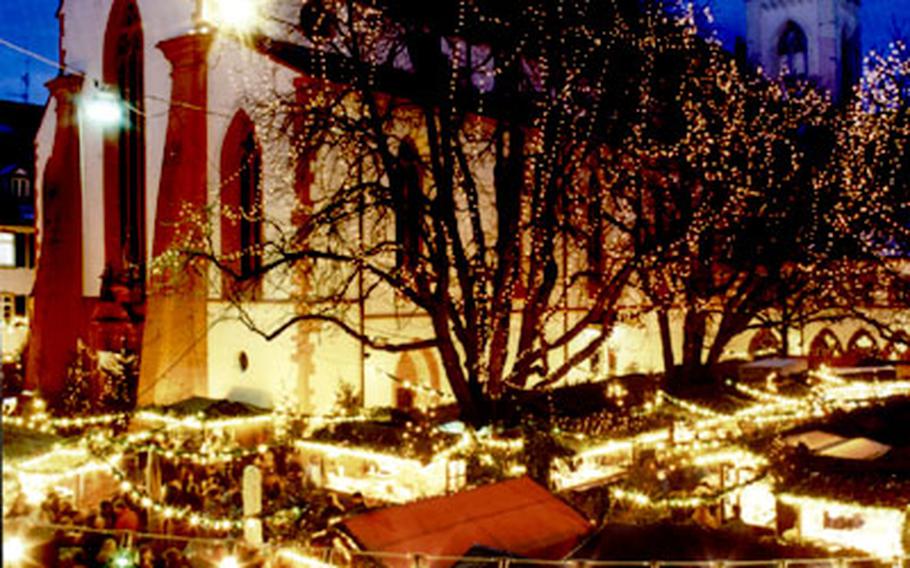 View over the market stalls in front of Freiburg, Germany&#39;s City Hall, with the Franciscan Church in the background. () 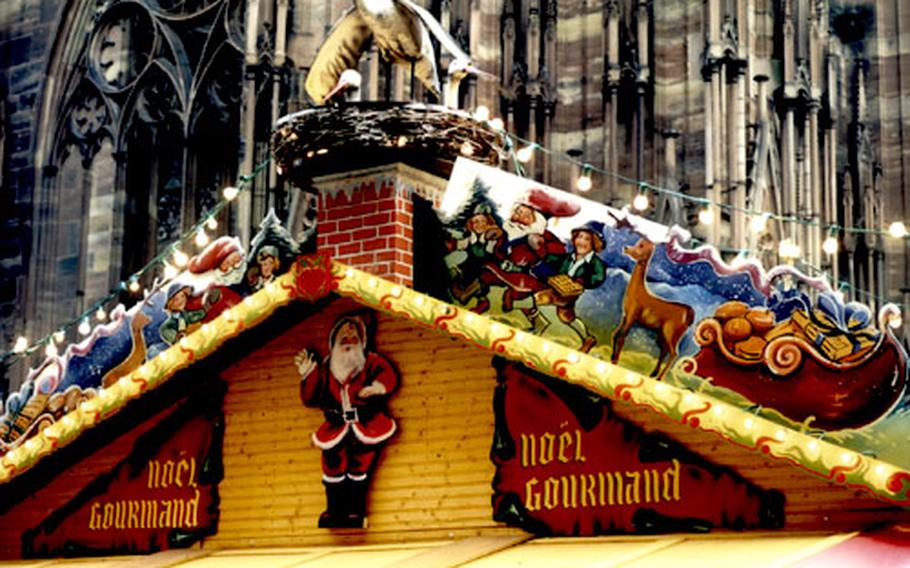 Strasbourg’s cathedral provides a backdrop for the top of a decorated stall at the French town’s Christmas market. ()

If you&rsquo;re in the upper Rhine region this season, you can make your market experience multicultural by visiting excellent markets in both France and Germany.

If practice makes perfect, it&rsquo;s not surprising that Strasbourg, France, can claim to have perhaps the best Christmas market to be found anywhere in Europe.

It was back in 1570 that some bright spark had the idea of setting up a huge fir tree in Strasbourg Cathedral and then decorating it with apples.

To contemporaries, the meaning was clear: The evergreen Tree of Life bearing the fruit of sin (the Latin word, malus, means both apple and evil) was a reminder of Adam&rsquo;s fall that would be redeemed by Christ. To shrewd businessmen, it also meant a chance to lighten the pockets of the faithful coming to the cathedral to meditate on the imminent Feast of the Nativity. So some tempting stands were positioned close to church portals and, lo, the Christkindel-m&auml;rik was up and running.

More than four centuries have passed, and the market has spilled out into numerous streets and squares. But it has retained a charm and intimacy that sets it apart from its counterparts across the German border.

The city &mdash; a cultural and culinary feast at any time of year &mdash; decks itself out with enough trees, tinsel and fairy lights to ensure that few can resist a surge of nostalgia when the fragrance of roasting chestnuts and mulled wine is accompanied by carols played by an enthusiastic brass band.

Like all good things, the market is best enjoyed slowly, preferably with a little stage management to heighten the effect. For example, park in the west part of the city near the fortified Covered Bridges (Ponts Couverts) and stroll through the narrow lanes of the area called Petite France. This former tanner&rsquo;s quarter by the river is a labyrinth of exquisite half-timbered houses leading to the Place Gutenberg, where a historic roundabout and the so-called Land of Fairytales serves as a nice prelude to the pleasures ahead.

Just a few steps away, the Rue Merciere opens up the breathtaking vista of the massive cathedral, an awesome fantasy of intricate stonework topped by a spire, nearly 470 feet high, that was the world&rsquo;s tallest building for about 500 years.

Huddling at its feet, the market stalls may tempt one to linger, but first, plunge into the cathedral itself. Take a seat and watch the gorgeous stained glass begin to glow, offering a vision of heavenly beauty. Then, as your eyes grow accustomed to the dark, enjoy the ancient tapestries that adorn the main nave during Advent showing the life of the Virgin Mary in vigorous narrative detail.

Only when the light begins to fade is it time to go outside to witness those magical moments as twilight falls and the cathedral lights up. It&rsquo;s a spectacle best enjoyed with a cup of mulled wine in one hand and a perhaps a crepe or tarte flamb&eacute;e (like a thin pizza but better) in the other.

Suitably fortified, you are now ready to explore and, as likely as not, to shop. Certainly, the range of available wares leaves little to be desired, with handmade Christmas decorations and lovely ceramic crib figures being particularly charming.

Leaving the Cathedral Square on the north side, head out toward Place Kl&eacute;ber, where a massive Christmas tree dominates the so-called Village of Sharing with its many stalls devoted to various charities.

Other ports of call are the Place Broglie by the City Hall and the Place du March&eacute;-Neuf with countless stalls, while the Place du Ch&acirc;teau adds a cosmopolitan touch this year with guest stalls from the Netherlands. Here, one can sample the delights of boerenkaas (strong cheese), soup or oliebollen (fritters) while the kids have a go on the ice rink.

Don&rsquo;t eat too much yet, though, as the Place de la Gare is the home of the Bredle Market, named after the local gingerbread specialty, which is just one of the array of goodies available, along with the omnipresent pretzels and Gugelhopf, a cake short on sugar and suitable for dunking in wine.

And at the Espace de la Couronne there is plenty of opportunity to further one&rsquo;s acquaintance with the renowned local wines. Amid a mini-forest of Christmas trees, the vintners of the region will be happy to guide you through the finer points of distinguishing a Riesling from a Gewurztraminer and, if you&rsquo;re lucky, might explain how the Alsatian Tokay stole its name from a Hungarian vintage. But that is another story.

The Strasbourg market begins Saturday and runs through Dec. 31.

Over the river and south through the Black Forest from Strasbourg lies the city of Freiburg, Germany. If you&rsquo;ve been in Germany for some time, you&rsquo;ve probably &ldquo;done&rdquo; most of the classic Christmas markets &mdash; Cologne, Stuttgart, Munich and Nuremberg &mdash; and maybe even Bad Wimpfen and Maulbronn.

Now, try Freiburg. It may not rival Strasbourg in size, but it&rsquo;s excellent and not everybody seems to have heard about it. Not yet, anyway.

One might expect that Freiburg&rsquo;s Christmas market would be clustered around its lovely Gothic cathedral. But this is not the case. Instead of supplanting the stalls of the normal food and flower market, the Yuletide vendors have gathered on the pretty square in front of the city hall, as well as in the adjoining Franziskanerstrasse.

The market is notable in that most stalls avoid the usual Christmas kitsch and are devoted to arts and crafts, particularly those of the nearby Black Forest. A traditional product that you don&rsquo;t find elsewhere is the Strohfink, little birds and other ornaments made of woven straw, and the hand-carved and hand-painted wooden decorations are particularly quaint. For those on the lookout for unusual or individual gifts, the puppets, most notably Hansel-and-Gretel-type witches, have a peculiar fascination, while the range of ceramics, aromatic candles and Christmas-tree decorations is outstanding.

The pleasures of browsing are enhanced by the obligatory mug of mulled wine, while the eclectic range of edibles should also help guard against the chilly breeze that sets the lights twinkling on the stalls. Those with a sweet tooth will have trouble resisting the gooey candy, waffles and chocolate-covered, creamy Mohrenk&ouml;pfe, while toffee apples and candy floss should keep the kids in a peaceable mood while Mom and Dad look for that special gift.

But when it comes down to it, Freiburg&rsquo;s modest but quaint market reminds visitors that there&rsquo;s much more to Christmas than just shopping and eating. The relaxed style and friendly people provide the ideal warm-up to the real thing, the idea that a few simple pleasures are the best way to evoke the &ldquo;peace and goodwill&rdquo; that make this the best time of year. Certainly, you have as good a chance here as anywhere of finding that most elusive and precious of gifts that money simply can&rsquo;t buy: the spirit of Christmas.

The Freiburg Christmas market began this week and runs through Dec. 23.

On the French side between Strasbourg and Freiburg are the markets of the Alsatian wine towns. Many have nice markets set amid half-timbered houses, though in many cases they are open on only a few weekends.

These markets have a high percentage of stalls dedicated to food: p&acirc;te, cheese, sausage, mustard, roasted nuts, cakes and cookies. Often the competition for buyers is so stiff that stall operators pass out samples, including macaroons just out of the oven and so warm they melt in your mouth.

The largest is at Colmar, which has its market spread around several several sites in the old town. Selestat, which claims to be the home of the first Christmas tree, dedicates its market to tree decorations. Ribeauvill&eacute;, Riquewihr, Kaysersberg, Obernai, Bergheim, Thann and others all have markets and special events now through Christmas.

Andrew Cowin is a freelance writer and photographer living in Heidelberg, Germany.