A savvy parents' guide to travel with kids Families enjoy a summer day on the Kleinhesselohersee in Munich, Germany’s English Garden. Working something into the travel schedule just for kids will keep the whole family happy. (Michael Abrams / S&S) 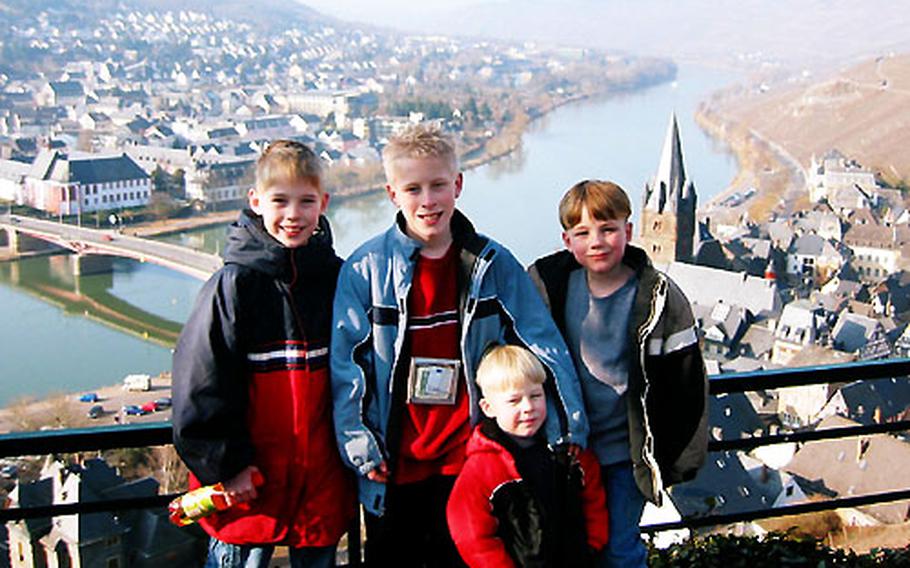 In planning family trips, the Moise family of Berglangenbach, Germany, makes sure there is something for everyone to enjoy. Posing for a photo overlooking Bernkastel-Kues on the Moselle River are the Moise sons, from left, Kyler, 9, Garrett, 11, Rohan, 4, and Bailey, 7. (Nick Moise / Special to S&S) 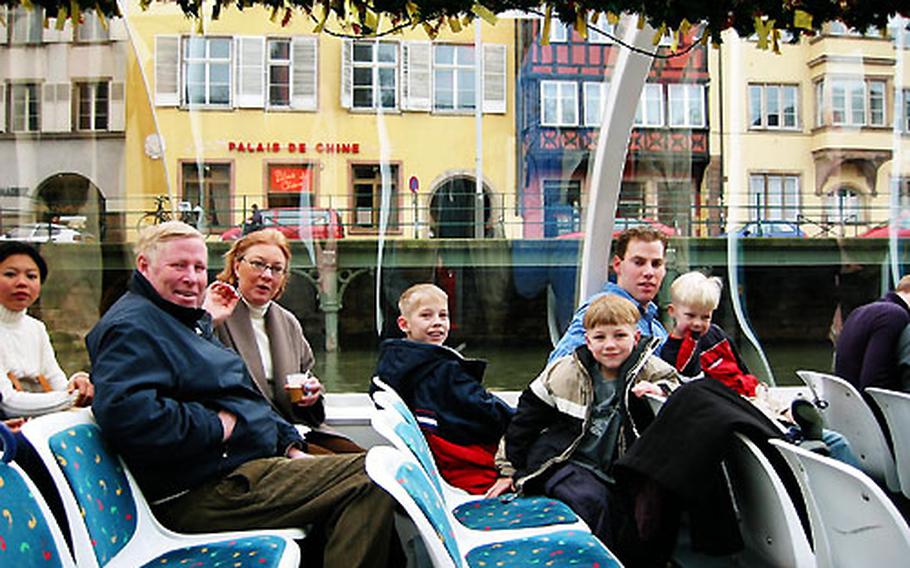 Three of the Moise kids and relatives take a boat tour of Strasbourg, France. Enjoying the tour, from left, are Richard Moise and Helen Moise and their grandchildren Kyler, 9, Bailey, 7, and Rohan 4, along with the boys&#39; uncle Jared Moise. (Photo courtesy of Nick Moise)

His four boys &ldquo;love it when they hear the word &lsquo;hotel,&rsquo; &rdquo; Nick Moise says.

And it&rsquo;s a word they hear a lot.

Nearly every weekend, the Moises &mdash; father Nick, mom Suayn, and sons Rohan, 4, Bailey, 7, Kyler, 9, and Garrett, 11 &mdash; head out to see Europe from their village in Berglangenbach, outside Baumholder, Germany.

They spent Easter in Belgium, exploring caves, castles and museums. Before that, they were in Paris, where they plan to return Memorial Day weekend for a camping trip.

Planned next is a big summer vacation through southern France all the way to Spain.

How do they do it with four boys under 12?

&ldquo;Flexibility,&rdquo; says Moise. &ldquo;When we went to Paris, we didn&rsquo;t expect to spend five hours in the Louvre. You have to have reasonable expectations.&rdquo;

For parents who like to travel, reaching that equilibrium of satisfied adult/contented children is no easy achievement. As Moise says, you must consider your kids as you ponder destinations.

&ldquo;We have to balance it out,&rdquo; he said. &ldquo;I don&rsquo;t think of it as dragging my kids along on my trip.&rdquo; It&rsquo;s their adventure, too, he adds.

As compulsive adventurers, my wife, Cheryl, and I justify all the time and money spent on the road by saying we&rsquo;re shaping our two daughters into worldly young people.

But sometimes I imagine 30-ish versions of Lucy and Lale undergoing intensive psychotherapy. &ldquo;And the worst thing,&rdquo; the say in unison, &ldquo;was our parents dragging us to every broken-down, mud hut village from Turkey to Mongolia.&rdquo;

We haven&rsquo;t done Mongolia. Yet. But they know we probably will because we&rsquo;ve had them on intensive travel schedules since the womb.

Lucy&rsquo;s first trip was a British Virgin Islands visit so late in her third trimester that she was almost born a British citizen. Her first overnighter came at three weeks. Lale hit the road at eight weeks, her inaugural trip being to the Greek island of Chios. At 5 and 2 respectively, the girls have visited nine nations including much of Turkey. Lucy has made 11 trans-Atlantic flights, Lale seven.

This is not out of the ordinary among military families. But every once in a while, we meet people who are totally incredulous. &ldquo;How do you travel with kids?&rdquo; they ask.

Invariably, they have tales of woe about cutting short trips after kids rebelled. Others have no idea how their children will react to a long trip, and friends with babies in the States are reluctant to visit us in Germany because of the nine-hour flight.

It&rsquo;s not easy, and every couple has its own approach to packing: how many clothes, which snacks, scented or unscented wipes.

My wife and I still argue over hotel rooms: Bigger is better for me, while Cheryl says it&rsquo;s a waste of time since we&rsquo;re rarely in it.

But here&rsquo;s what we agree on after five years on the road with kids: First and foremost, the ultimate secret is to get kids on the road early in life. In fact, the first six months is about the easiest time to travel with kids. Babies&rsquo; needs are few. Few newborns pitch a fit to go to Disneyland, and a baby is just as happy in the Louvre as in your nursery at home.

As they mature, children are going to rebel at interruptions in their routine. So you have to refine routines inside the travel experience. You begin by trying out toy combinations. One of the best &mdash; or worst, depending on how many times you&rsquo;ve heard &ldquo;The Martian Bop&rdquo; &mdash; investments we made is a $20 cassette player so that Lucy and Lale can pass the hours with recorded books or music.

The more you travel, the more savvy you become. Successful travel with kids means making note of tiny details, from which insulated drink bags and coolers work best to which big European cities have the best parks, playgrounds and family attractions.

Then, you experiment with scheduling. For example, we used to leave on trips early in the mornings. Bad idea. Let the kids play a couple of hours in the morning, if possible, and they&rsquo;ll nap on the way. That gives you more time for long trips before child-seat fatigue sets in.

Here are some other tips for the road gained from our experiences and from talking with others:

&para; You can see a lot of stuff, even spend hours in museums, if you put a playground visit or carousel ride in between the places mom and dad want to see. In March, we averaged 11 hours each of four days exploring Paris. But about a quarter of those hours were spent at playgrounds or on carousels, or at destinations kids enjoy, such as the Eiffel Tower.

&para; Do your pre-trip preparation. If his family is going to a museum to see Van Gogh&rsquo;s paintings, Moise gives his boys &ldquo;all the background&rdquo; on the Dutch painter&rsquo;s life and work. &ldquo;I think it&rsquo;s helpful to familiarize them. As they get older, they&rsquo;re better able to relate to what they&rsquo;re going to see, and maybe they&rsquo;ve studied it in school,&rdquo; says Moise, a former art teacher.

&para; Feed &rsquo;em first, Moise says. Stop at the wurst and fries stand before your destination and top-up those tanks.

&para; Be honest with yourself about your kids&rsquo; limits. This is still the most difficult judgment for us. Some of the most horrendous meltdowns we&rsquo;ve had came after the girls simply hit the wall, too wired to sleep and too exhausted to calm down.

&para; Backpacking small kids is the only way to travel. Strollers are fine for the mall, but not on the cobblestone streets and flagstone passageways of 1,000-year-old cities.

&para; Consider traveling with a compatible family whose children are close in age to your brood. This is a bit risky, because people with differing tastes, interests and income could cramp your style. But the right chemistry can make difficult trips easy. And if the kids are occupied, the parents have more time to savor the grown-up pursuits of good conversation and relaxation.

&para; In Europe, the best way to economize and to add to the fun is to picnic. You can sample the local foods and not have to worry about snooty waiters or kids confined to cramped restaurants. Moise says his family typically eats one big meal in a restaurant. The rest of the time they frequent food stands, bakeries and groceries for regional specialties. &ldquo;It&rsquo;s much cheaper and quicker. And the kids get a choice, a say so,&rdquo; he says.

The truth is, until they&rsquo;re off at college, traveling with children is, at best, a compromise.

I personally would give nearly anything to have the luxury to take my wife to see Mozart&rsquo;s &ldquo;Magic Flute&rdquo; in Salzburg, or amble together through Istanbul&rsquo;s antique dealers and carpet shops. Nearly anything, that is, except missing my daughters&rsquo; delight as they pat the painted manes of their favorite Paris carousel horse.

You can find more hints for traveling with children on the Internet at: www.travelwithourkids.com or http://travelwithkids.about.com.

For medical issues related to traveling with children, go to: www.princetonol.com/family/columns/pedgroup9.html