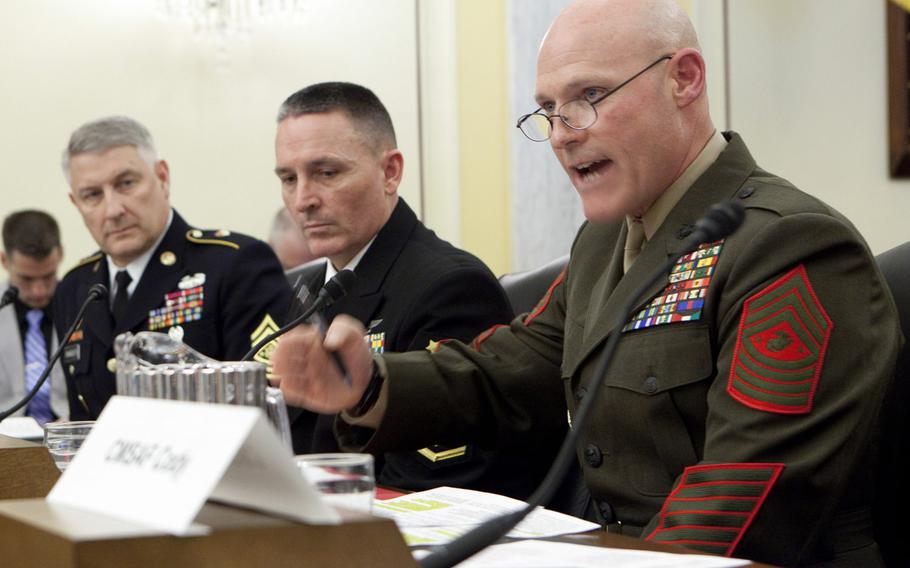 What started as a hard-charging Marine comment to Congress has turned into a public relations emergency for Sgt. Maj. of the Marine Corps Micheal Barrett.

Speaking to the Senate Armed Services Subcommittee on Personnel on Wednesday, Barrett was making the case that personnel costs needed to be reined in to maintain readiness — as all the services have in recent testimony — but went a step further by saying that lower pay would actually improve discipline within the Corps.

“I truly believe it will raise discipline,” Barrett said. “You’ll have better spending habits. You won’t be so wasteful.”

He told lawmakers that if the service didn’t check growth on personnel costs, “we will become an entitlement-based, a health care provider-based Corps, and not a warfighting organization.”

His comments lit up Facebook and other social media sites. Marines and their supporters derided foreign aid, spoke of themselves or comrades getting state or federal financial aid — “read that as welfare” — and chided Marine Corps leadership as being out of touch.

“Says the SMMC who is knocking down $8K+ a month, living in gov’t quarters, etc. You have forgotten your roots and have no clue how some of your Marines are living,” said one commenter on Facebook.

Barrett wrote in his open letter to Marines, posted on usmc.mil on Monday, that his comments were miscontrued.

“Recent reporting of my testimony may have left you with a mistaken impression that I don’t care about your quality of life and that I support lower pay for servicemembers. This is not true,” he wrote.

“Nobody wants less,” Barrett continued. “But if we don’t slow the growth of our hard-earned generous compensation/benefit entitlements that we have enjoyed over the past decade, we don’t have sufficient dollars for what we need — investment in our warfighting capabilities and our wonderful Marine and family care programs.”

Barrett’s testimony, in support of DOD’s fiscal 2015 budget, come at a time of increased pressure on the services to make cuts as the war in Afghanistan is ending, and while Congress-mandated “sequester” budgets poke holes in the balance sheets.

Barrett relayed to lawmakers the sense that he got from talking to his Marines.

“Marines don’t run around [asking] about compensation, benefits, retirement modernization. That’s not on their minds,” Barrett told lawmakers. “As I walk around to talk to the thousands [in] audiences, they want to know into whose neck do we put a boot next. They want to know about what new equipment are we getting.

“In my 33 years I have never seen this level of quality of life, ever! We have never had it so good.”