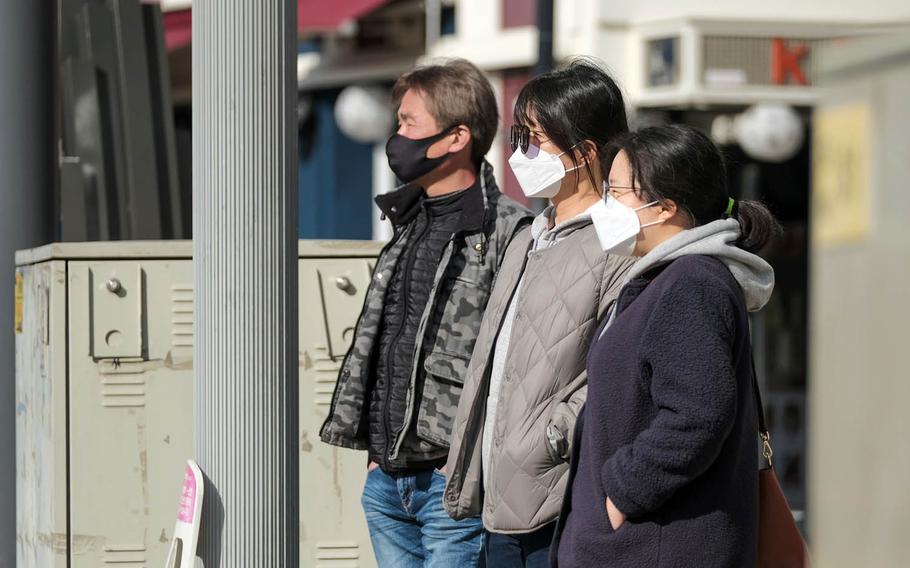 In Japan, the capital city reported another 279 infections Thursday, according to the public broadcaster NHK. About 270 people per day are still contracting the virus in Tokyo, according to metro government data.

Prime Minister Yoshihide Suga on Thursday extended the coronavirus state of emergency in Tokyo and the surrounding prefectures of Saitama, Kanagawa and Chiba another two weeks, its second extension, according to Nikkei Asia. The emergency was set to expire Sunday.

The emergency measures, though voluntary, mean restaurants and other businesses close by 8 p.m., businesses opt for telework when possible and residents refrain from unnecessary travel.

U.S. bases in and around Tokyo have imposed similar restrictions. However, some are easing off-duty travel bans as their case numbers diminish.

The Marine Corps on Thursday had four people test on Okinawa, two at Camp Foster and one each at camps Hansen and Kinser, according to a Facebook post. The Marines provided no further information.

Kadena Air Base, also on Okinawa, reported one new coronavirus patient, a person who tested positive before leaving quarantine; that patient had recently traveled outside Japan, according to a Facebook post.

In South Korea, the Central Disease Control Headquarters reported another 401 infections Wednesday, including 117 in Seoul and 177 in Gyeonggi province, where the largest U.S. installation, Camp Humphreys, is located.

A soldier at Camp Casey, north of Seoul, who fell ill with symptoms of COVID-19, the coronavirus respiratory disease, tested positive Wednesday, according to USFK.

Two people at Humphreys, 50 miles south of Seoul, tested positive Tuesday. One is a soldier discovered through a screening program. The other is a South Korean contractor who fell ill and last visited Humphreys on Saturday, according to a USFK press release.

Another 13 people tested positive after arriving in South Korea between Feb. 12 and Monday, according to USFK.

One service member arrived Monday from the U.S. at Osan Air Base on a government-chartered passenger flight. Another eight service members and four dependents arrived on commercial flights at Incheon International Airport on Feb. 12, 16-18, 23, Friday and Sunday, according to USFK.