‘They put their lives on the line for mine’ 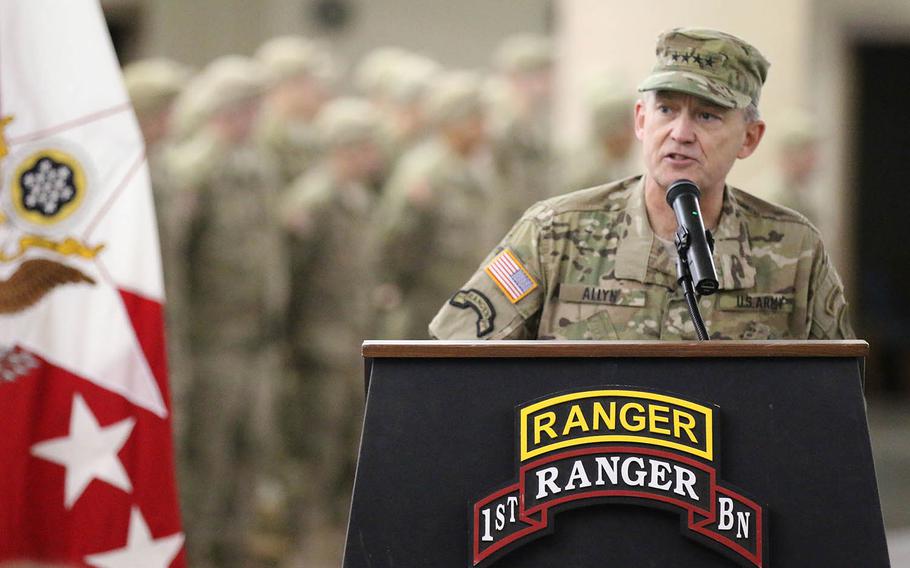 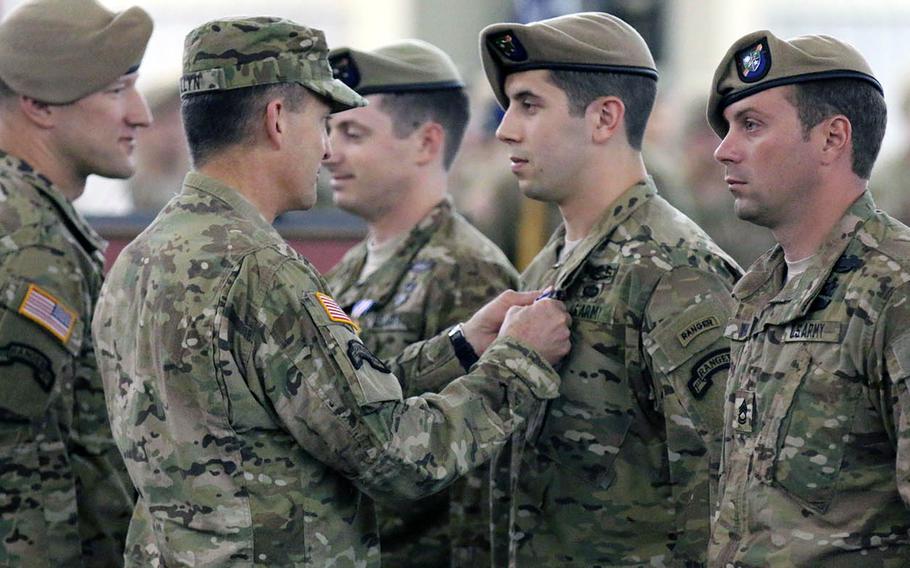 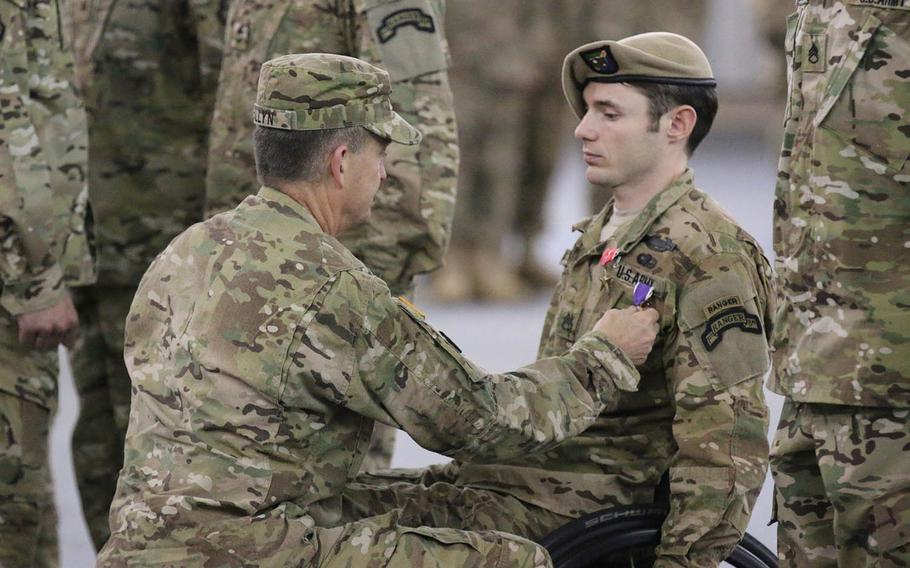 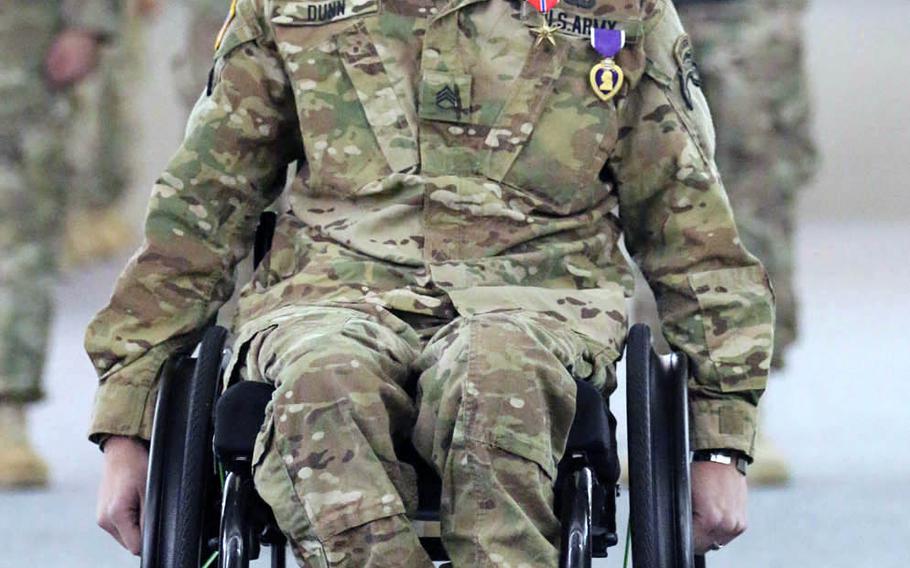 Dec. 2, 2014 Nangarhar province, Afghanistan With three enemy fighters firing on the combined assault team of U.S. Army Rangers and Afghan commandos, then-Sgt. Travis Dunn moved toward the targets, laying down suppressive fire that allowed his teammates to move into a better position.

Then he was hit.

An AK-47 round entered through the Ranger’s left armpit, immediately collapsing both lungs and severing his spinal cord. The force of the bullet threw him from the compound’s roof into a courtyard below, where he lay immobilized.

Within seconds, two of Dunn’s teammates, Sgt. Derek Anderson and Staff Sgt. James Jones, risked their lives, exposing themselves to heavy automatic gunfire as they hurried into the courtyard to grab their critically injured comrade and pull him to cover.

For those actions in Nangarhar province, Afghanistan, on Dec. 2, 2014, Jones and Anderson, of the 1st Battalion, 75th Ranger Regiment, based at Hunter Army Airfield, Ga., would be awarded the Silver Star. Dunn, left permanently paralyzed from his injuries, would receive the Bronze Star with “V” device for valor alongside them in a ceremony at Hunter in April 2015.

The quick reactions of his fellow Rangers allowed him to survive the ordeal, said Dunn, now 25. He credited their advanced training, saying he doubted he would be alive if he’d suffered the same injuries deployed with any other unit.

“Basically, I owe my life to them,” said Dunn, who has since been promoted to staff sergeant as he awaits evaluation from the Army’s Medical Evaluation Board. “You can’t really put into words how much I owe these guys for what they did. They put their lives on the line for mine.”

Anderson and Jones credit their training. They were just doing their job, they’ve said, looking out for their fellow Ranger as any other soldier in the 75th would do.

“I really didn’t think about anything at the time,” said Anderson, 25, who has served seven combat tours since joining the Army eight years ago. “It’s just a reaction.”

Their mission — a classified assault on enemy compounds in eastern Afghanistan to search for a high-value target — was much like hundreds they’d completed before, the Rangers said.

Under the cover of night, the assault team of 1st Battalion Rangers and Ktah Khas Afghan special operators moved quickly and quietly through their first target and began a nearly mile-long trek toward a second compound. That’s when a pair of armed enemy fighters attempted to flank the unit through the woods. Dunn moved toward the enemy, opening fire long enough for other assaulters to take cover.

As one of the fighters prepared to target Jones, Anderson “instinctively maneuvered to a point of tactical advantage with zero regard for personal safety and accurately engaged one of the two enemy combatants,” according to his Silver Star citation. He continued to fire on the other enemy long enough for Jones to eliminate the threat with a hand grenade.

The firefight — which would last six hours — quickly resumed when the Rangers neared the second compound. The assault team faced PKM, AK-47 and RPG fire as a handful of enemy fighters approached them. Dunn and Anderson spotted them, quickly opening fire, killing all but one of the militants. The other ran away and was killed by fire from a supporting helicopter.

At the second compound, the Rangers pulled security as the Afghan commandos faced the threat of three barricaded militants.

With their partners pinned down by enemy fire, Dunn rushed forward.

“Without hesitation and with total disregard for his own personal safety Sgt. Dunn moved from behind relative cover and placed himself in harm’s way in order to suppress the enemy,” according to his medal citation. His actions just before he was shot, it continued, “resulted in the preservation of multiple Rangers and Ktah Khas … soldiers.”

At the sight of his fallen teammate, Anderson rushed to Dunn’s aid. About 20 feet away, Jones heard the call of an injured Ranger over the radio. He rushed into the compound to help Anderson move Dunn to safety.

He’d later describe the split-second decision as a “knee-jerk reaction.”

“It’s something we train for,” said Jones, who helped treat Dunn before returning under PKM fire to the fight, directing his team into position to kill the enemy fighters.

Anderson, Jones and Dunn directly contributed to the elimination of 25 enemy fighters, their medal citations state.

“I’d definitely do it again if I had to go back,” Anderson said. “I wouldn’t change anything.”

For Dunn, the engagement would change his life. In addition to the Bronze Star with “V,” Dunn was awarded the Purple Heart for that mission, his second.

“I just counted it as doing my job,” he said. “I didn’t expect to get any (awards) from that night because we’d done that before. I didn’t think it was that big of an accomplishment.”

Anderson and Jones, he said, undoubtedly earned their Silver Stars.

“For the guys that saved my life, they definitely got what they deserved when they received their medals,” Dunn said, adding that he will miss working every day as an Army Ranger when he is medically retired.

“Working with all these dudes that hold themselves to a higher standard than most people — it shows with the things we do out on target, and it shows in our training and it shows when instances like this happen,” Dunn said. “When lives are put in danger it means a lot to me to have been a part of that regiment for the last seven years.”