Their turn to serve: Fifth-graders do good deeds for war veterans 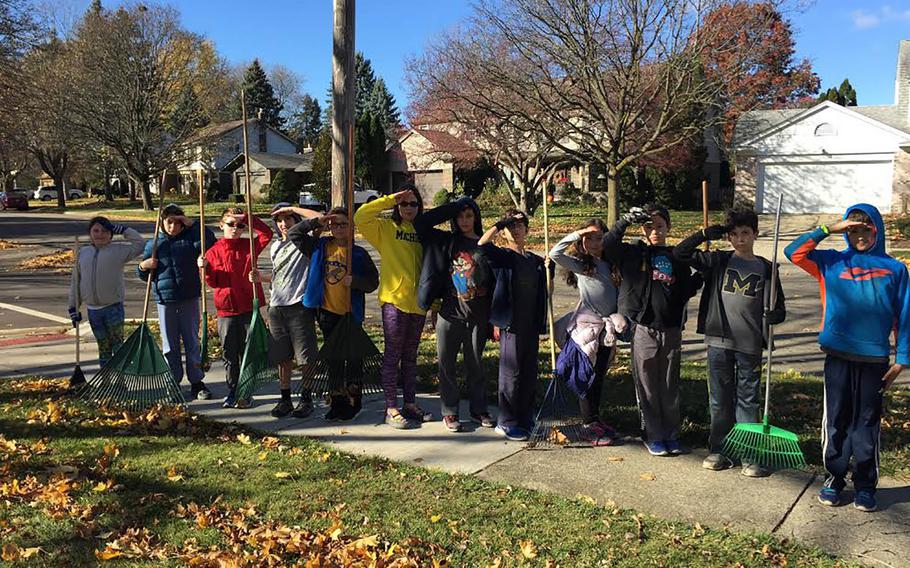 Twelve pupils from Carol Gannon's fifth-grade class at the Hebrew Day School of Ann Arbor, Mich., decided they wanted to give back to the war veterans in their neighborhood by raking their leaves (Courtesy of Carol Gannon)

Twelve pupils from Carol Gannon's fifth-grade class at the Hebrew Day School of Ann Arbor, Mich., decided they wanted to give back to the war veterans in their neighborhood by raking their leaves (Courtesy of Carol Gannon) 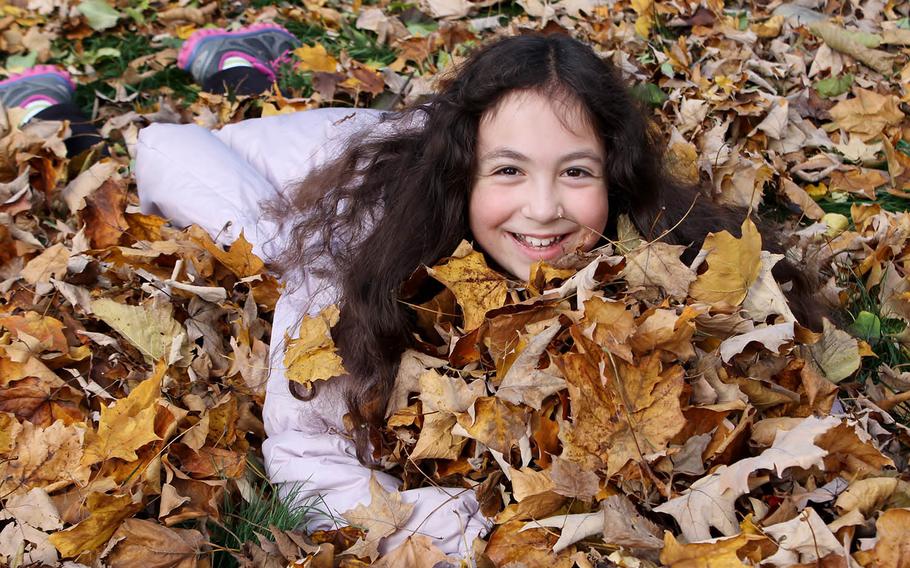 Eliana Adler take a minute to play in the leaves. (Courtesy of Ali Reingold) 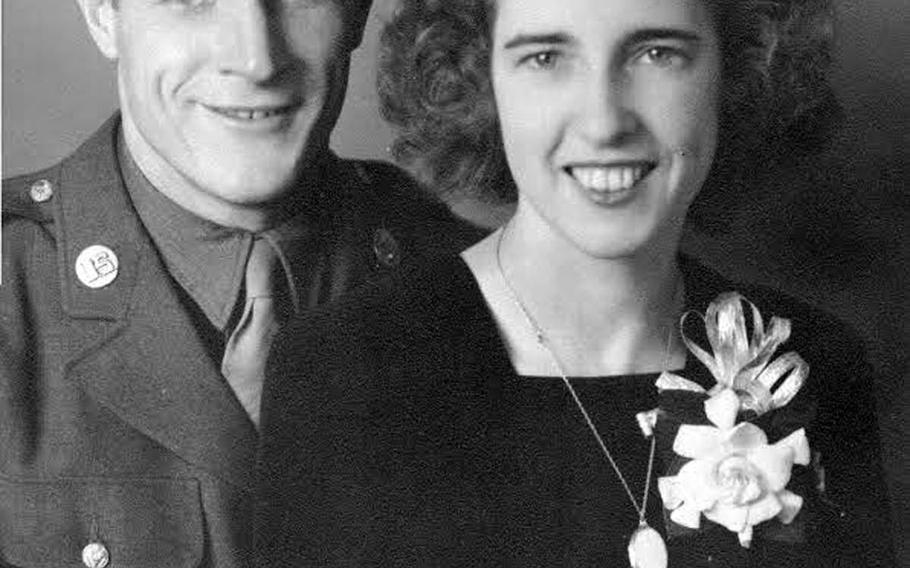 Otto Anderson and his wife, Edith, in a photo taken for their wedding in 1942. (Courtesy of Mr. Otto Herbert Anderson) 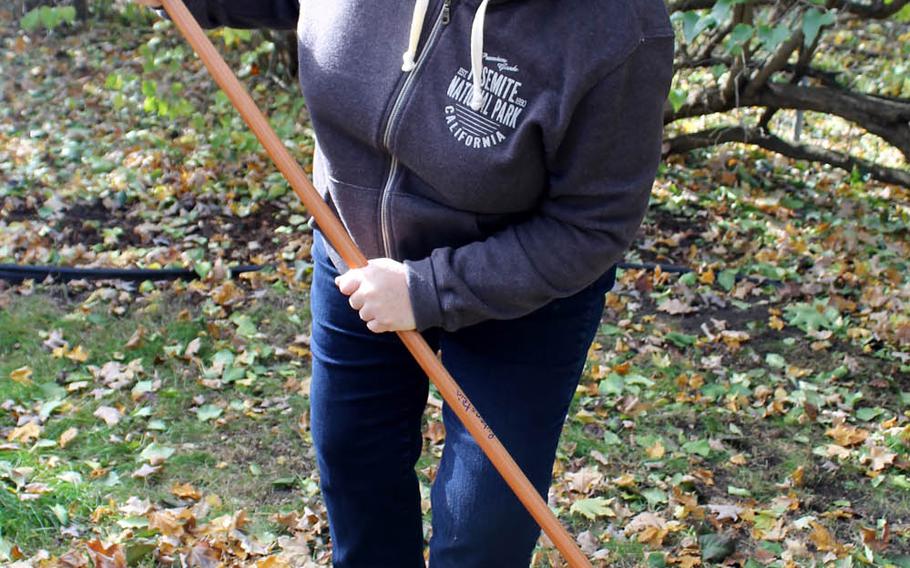 Fifth-grade teacher Carol Gannon rolls up her sleeves and digs in to the raking. (Courtesy of Ali Reingold) 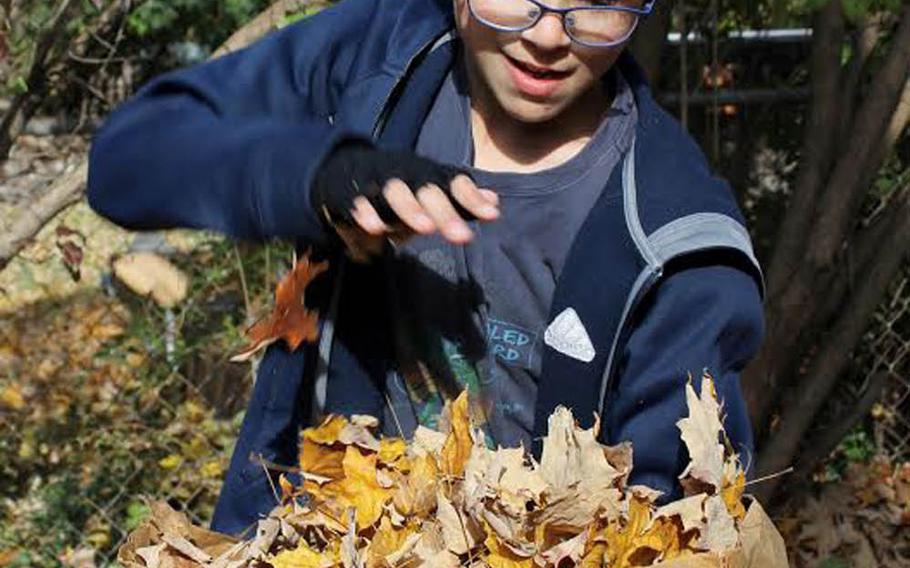 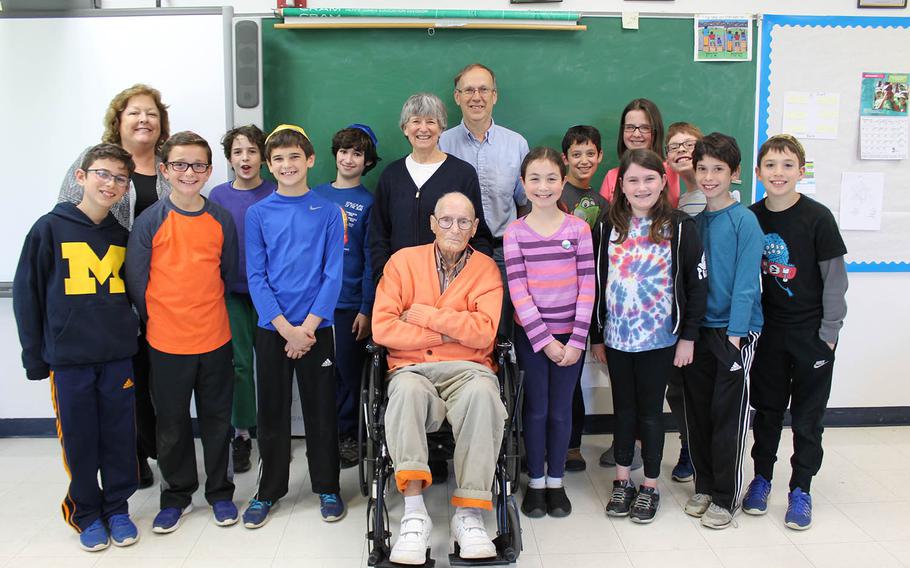 Fifth-graders and their teacher, Carol Gannon, second from left, pose with Mr. Anderson and his family for a group photo. (Courtesy of Ali Reingold ) 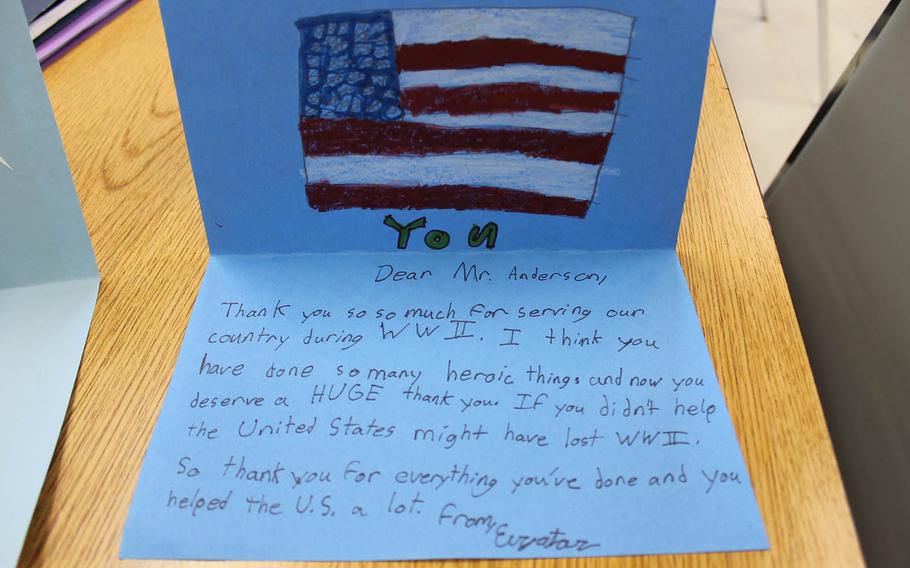 Carol Gannon's fifth-grade class made cards for Mr. Anderson to thank him for his service in World War II. (Courtesy of Ali Reingold )

ANN ARBOR, Mich. — If fifth-graders could mobilize into a unit of sorts, this one would be called the Raking Brigade.

Twelve fifth-graders from the Hebrew Day School of Ann Arbor, Mich., decided that this holiday season they wanted to give back to the residents in their neighborhood in Michigan who had given the greatest service to the United States: the veterans.

“While giving back is something we strive to do all year round, for the holidays we wanted to emphasize a hands-on component,” explained Carol Gannon, a fifth-grade general studies teacher at Hebrew Day School, who incorporates philanthropy into the platform of the school student council, which she advises. “I believe that philanthropy should always include an element where you give of yourself. That’s where people learn to care about other people.”

The 10- and 11-year-olds brainstormed. What could they do? Rake leaves and shovel snow. Perhaps other projects.

But despite days of trying, they struggled to locate veterans. Even local veterans organizations could not disclose any names. Jennifer Rosenberg, head of the school, tried an alternate route: she posted a query on a neighborhood listserv, noting the students’ desire to help.

When that email landed in Capt. Craig Ross’ inbox, the two-time veteran was extremely grateful. Capt. Ross, a Navy physician, served with the 7th Marine Regiment during the 2003 invasion into Iraq and did a seven-month tour in Djibouti, Africa, in 2013-2014. Now he was juggling Navy Reserve duty with running a solo family practice and parenting two small children with his wife, Holly.

“I had just returned from a meeting in Jacksonville, Fla., where I chair the Navy Reserve Medical Executive Committee,” said Ross. “The next morning, I had to drive to Battle Creek for my monthly weekend drill at the Navy Operational Support Center.” Ross barely had time to catch up on office paperwork, let alone rake leaves. The offer to help came down like manna from heaven.

Mind you, this was no small raking job. It was more like a raking mission. On a lot spanning a tenth of an acre, the front and back yards were blanketed with leaves that covered every speck of lawn. Leaves had fallen from seven maple trees and a sycamore tree, one of the tallest in the neighborhood, creating a yellow, brown and umber leaf-like carpet. Leaves covered every flower bed, the deck, even the children’s outdoor toys.

Grinning and giddy, the kids grabbed their rakes and raced the three blocks to the Ross household. The weather was sunny and crisp. With a steady crunch of leaves underfoot, they took turns raking, opening bags, stomping on the leaves to crush them and filling bags and compost bins. Though dutiful about their service, they laughed and cheered the whole time.

“Who knew that raking leaves could be so much fun,” said student Samantha Caminker.

Watching from inside the house was another veteran: Craig’s wife, Dr. Holly Ross. Her five-year naval career included a three-month deployment as a flight surgeon at a Marine Corps air base west of Fallujah.

“I just can’t believe the generosity of these kids,” said Holly, three-month-old Zane in her arms. “We didn’t serve hoping to get any sort of reward or thanks. So every time someone offers to do something, it’s very moving and humbling.”

With ruddy cheeks and swelled hearts, the students lined the bags on the driveway next to the garage. They grabbed their rakes, saluted their teacher and headed back to school.

En route, they happened upon Thomas Diehl, 64, standing almost knee-deep alone in his yard, raking leaves that had dropped from a 20-foot magnolia tree and a 50-foot poplar tree.

“Are you a veteran?” they asked. He shook his head.

But it was clear that he, too, could use some help.

“Let’s do it!” In 15 minutes, they raked up 10 30-gallon bags; each one weighed between 20 to 30 pounds. Giving again only amplified their good feeling.

Back at school, another response came in to the email query posted by the head of school. This request involved a different kind of service.

“My 100-year-old grandpa, a WWII veteran, lives with me here in the neighborhood. He doesn’t need any help raking or shoveling. But he would LOVE something to brighten his day/relieve his monotony. A hand-decorated card? A brief visit from someone? An invite to a 5th grade choir or band performance?”

Otto Herbert Anderson was resting on a day bed in the living room while his granddaughter, Robin Fowler, typed the request. He had moved into her home in September 2015 after suffering several strokes. His daughter and son-in-law, Pam and Jack Revette, Robin’s parents, had also moved in to offer maximum support. Grandpa Herb had left behind sixty years of history in Dowagiac in southwestern Michigan: serving on the City Council, president of the Lion’s Club, his church community and coffee club. Edith, his wife of 70 years, had passed away in 2013. Robin had listened to him reflect, as seniors often do at the end of their lives. “Grandpa sure could use a neighborhood embrace,” she thought to herself.

Ms. Gannon read the granddaughter’s request aloud to her class. The students burst into applause. A real service opportunity, coupled with the chance to meet a centenarian.

The following Monday, Anderson, clad in striped button-down shirt and peach cardigan sweater, was wheeled into school in a wheelchair pushed by his daughter and son-in-law. The smell of chocolate chip cookies fresh out of the oven baked by the students wafted in the air. The students invited their guest of honor to sit at a table covered with a blue tablecloth and red and silver stars.

As Anderson ate some cookies and washed them down with milk, the fifth graders serenaded him. “Let me root, root, root for the home team,” chimed in the reserved 100-year-old, smiling through their rendition of “Take Me out to the Ball Game.”

In the middle of the table was a stack of 12 handmade cards honoring Anderson’s service. Each pop-up card was decorated with hand-crafted American flags and admiring words. Pam, his daughter, began to read them aloud

“I think you have done so many heroic things, and now you deserve a huge thank-you. If you didn’t help, the United States might have lost World War II,” wrote Evyatar Eliav.

As each student’s card was read, he or she reached out to hold Anderson’s hand or capture his gaze.

“My grandmother escaped Berlin, Germany,” said Sam Gershowitz, touching Anderson’s fingers. “And you helped save her!”

“What did I do to deserve this,” said the humble centenarian, wiping tears from his eyes. “All I did was live a long time.”

Anderson was drafted in September 1941 and joined the 36th Infantry Division in January 1942. When he learned that he would be sent overseas, he married his fiancee, Edith, in October 1942. He was wed in uniform. Anderson was sent to Morocco in 1943 and served in Italy, France and Germany before being discharged in October 1945.

Sam’s words about his grandmother in Germany prompted Anderson to reflect. Although he didn’t like to talk about it much, his division was recognized for liberating the subcamps of Dachau.

Talk of war brought Ms. Gannon to shed a few tears. The students did not know that her paternal grandfather had served in World War I, part of the Liverpool pals, and that she was just their age when her beloved older brother, Jim Lenton, was sent off to Vietnam. He suffers to this day from the effects of Agent Orange.

But the real gift was an enveloping of the heart. Looking into the eyes of the students, Anderson saw that they were as glad to see him as he was to see them.

That mutual delight was an early Christmas present for a distinguished veteran ... from a sweet group of 10- and 11-year-olds, the Raking Brigade.

Ruth Ebenstein is an award-winning American-Israeli writer, historian and health activist and author of the forthcoming book “Bosom Buddies: How Breast Cancer Fostered An Unexpected Friendship Across the Israeli-Palestinian Divide.” Follow her on Facebook at Laugh Through Breast Cancer-Ruth Ebenstein and on twitter, @ruthebenstein.