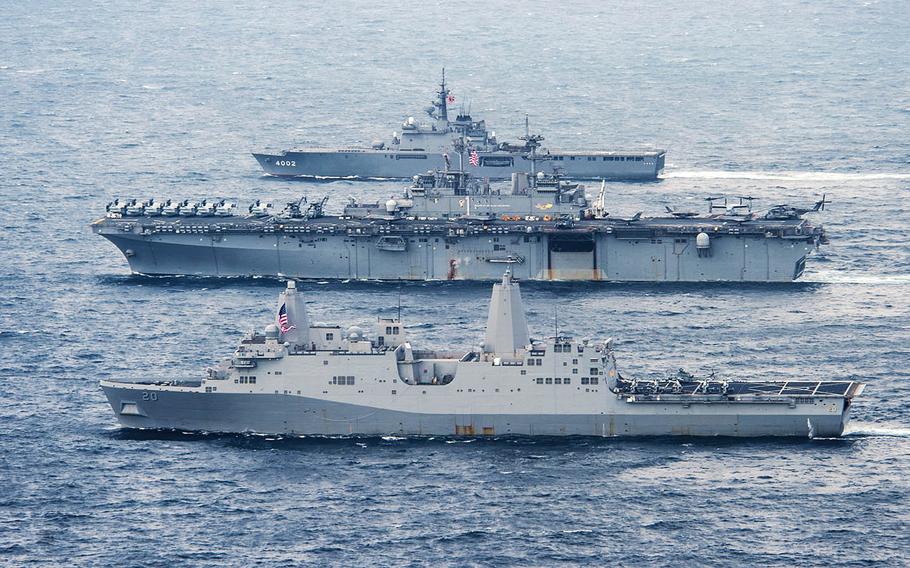 YOKOSUKA NAVAL BASE, Japan — The USS Wasp has trained alongside a Japan Maritime Self-Defense Force vessel for the first time since arriving at its new homeport in Japan earlier this year.

The brief exercise demonstrated both services’ “enduring commitment” to the “U.S.-Japan alliance and security of the region,” a Navy statement said. Chinese activity in the East China Sea has long been an issue for Japan. Tokyo protested to Beijing in January after a submarine, presumed to be Chinese, was detected near Okinawa and the disputed Senkaku Islands. Vice Foreign Minister Shinsuke Sugiyama expressed “great concern” over the issue and urged China not to repeat the incursion.

“We welcome the deployment of USS Wasp in this region, and I hope we continue to work together with Wasp,” he said of the ship, which arrived at Sasebo Naval Base in January and will eventually replace the USS Bonhomme Richard as flagship of Amphibious Force 7th Fleet.

The Navy said some JMSDF sailors will remain embarked with the Wasp “to learn about how the U.S. military conducts amphibious training.”

The event marked the first time since World War II that Japan has a marine unit “trained to counter threats against Japanese islands along the edge of its borders,” the Navy said.

“The establishment of the ARDB signifies a new era of JMSDF-[Japan Ground Self-Defense Force] unity in operating from the sea and the U.S. will continue to build combined capability alongside the Japan Self Defense Forces,” the service said.