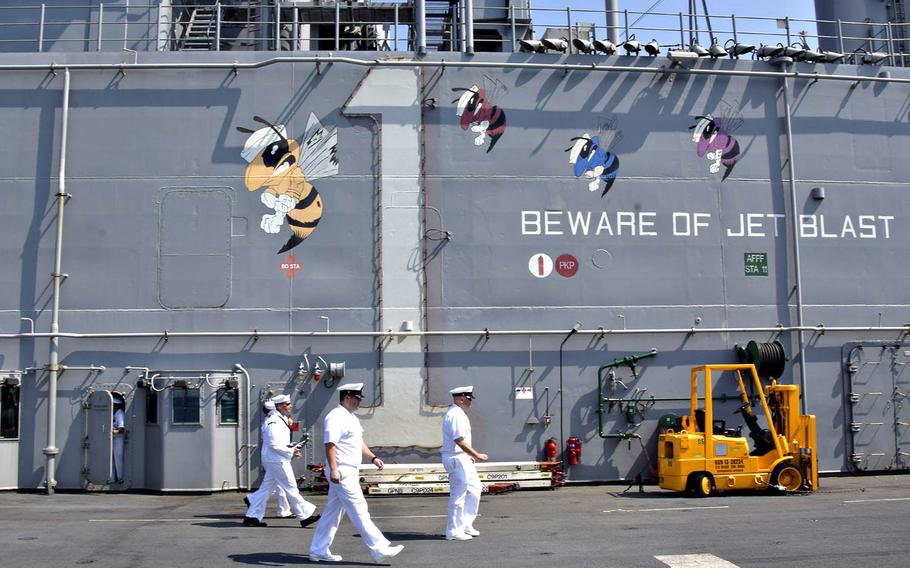 Sailors aboard the USS Wasp prepare to man the rails as the amphibious-assault ship arrives in Singapore, Tuesday, Oct. 2, 2018. (Daniel Barker/U.S. Navy)

The USS Wasp arrived in Singapore on Tuesday, a week after its strike group of 2,200 sailors and Marines were denied a port visit to Hong Kong by Beijing.

The Sasebo, Japan-based Wasp — accompanied by the landing dock ship USS Ashland and members of the Okinawa-based 31st Marine Expeditionary Unit — have been patrolling the Western Pacific since early August.

The Wasp’s commander, Capt. Colby Howard, said the sailors and Marines were “very excited for some well-deserved time ashore after two very successful months” at sea, a Navy statement said.

Late last month, China turned down a U.S. request for the group to stop in Hong Kong in October. The denial came a day after 10 percent tariffs on $200 billion of annual Chinese imports went into effect. The U.S. also had recently issued sanctions on China after discovering the country had bought fighter jets from Russia and a surface-to-air missile system, and in May disinvited China from participating in its large-scale multinational Rim of the Pacific exercise.

The Wasp strike group recently conducted a drill focused on defending its ships in the South China Sea, where on Sunday a Chinese destroyer veered within 45 yards of the USS Decatur in “an unsafe and unprofessional maneuver” in the Spratly Islands, the Navy said.

The Navy regularly sends its ships on patrols through the South and East China seas to maintain freedom of navigation through the international waters that China attempts to claim. The country is militarizing reclaimed land in the seas and regularly disputes the sovereignty of islands in the region. The strike group’s patrol has also included diaster-relief operations. After Typhoon Mangkhut struck the Northern Marianas on Sept. 10, its ships positioned themselves behind the then-category 2 storm and had aircraft in the air by sunrise the next day, said Task Force 76 commander Rear Adm. Brad Cooper.

“Within hours, we had Marines and sailors on ground assessing damage and preparing for recovery,” he told Stars and Stripes via telephone from the Wasp on Sept. 13.

Mangkhut later plowed into Hong Kong, becoming the most powerful storm to hit the city since 1979, according to the Hong Kong Observatory.