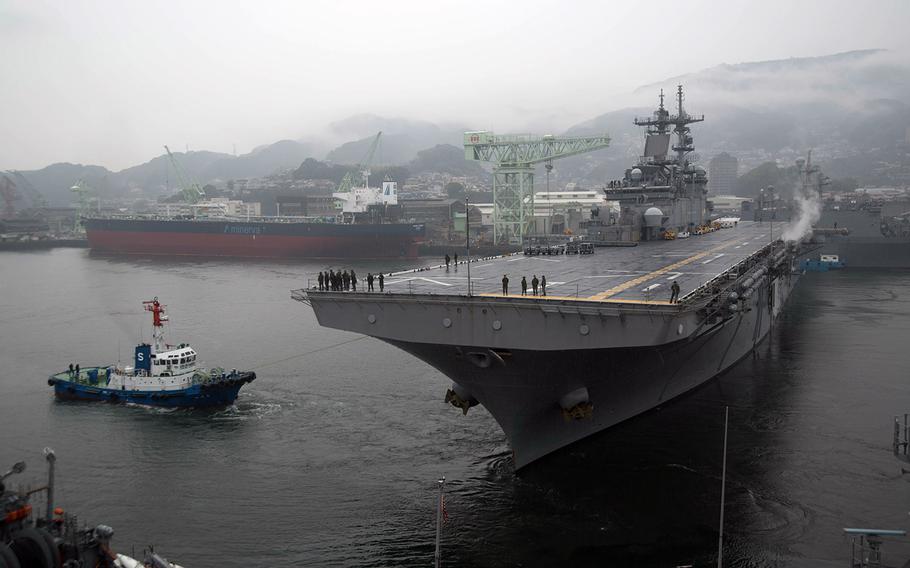 The USS Wasp has left Sasebo Naval Base for the first time since arriving at its new homeport in Japan earlier this year.

The amphibious assault ship — which some have dubbed a miniature aircraft carrier because of upgrades that allow it to host the next-generation F-35B Lightning II stealth fighter — steamed away Saturday and was scheduled to undergo a “ready-for-sea assessment” before heading out on a routine patrol of the region.

The Wasp is part of the Defense Department’s effort to put its most advanced capabilities in the region, an Amphibious Force 7th Fleet statement said.

F-35Bs, which are capable of short takeoffs and vertical landings, were to embark on the ship during this patrol, the Navy said earlier this year. The stealth jets are flown by Marine Fighter Attack Squadron 121, which arrived last year at nearby Marine Corps Air Station Iwakuni.

The Wasp can host more than 1,600 Marines. The 844-foot flattop ship employs 31 aircraft, as well as Marine amphibious craft out of its well deck.

“What the crew of this ship has accomplished given the rigorous schedule of the ship is really amazing,” Command Master Chief Rudy Johnson II said in a Navy statement. “I am incredibly proud of the consistent ‘can-do’ attitude which emanates from these Sailors, and am very excited about the upcoming successes of this patrol.”

The Wasp patrol is among several Navy missions underway in the Asia-Pacific. Sister amphibious assault ship USS Bonhomme Richard — also homeported at Sasebo — arrived Sunday in Manila for a port visit after taking part in multinational Cobra Gold drills in Thailand. The USS Carl Vinson and its strike group pulled into Danang Bay on Monday, becoming the first U.S. aircraft carrier to visit Vietnam in more than four decades.

The Wasp serves under Amphibious Force 7th Fleet, the Navy’s only forward-deployed amphibious force, headquartered at White Beach Naval Facility, Okinawa. It arrived at Sasebo Jan. 14 to replace the Bonhomme Richard after a 28,400-mile journey from Norfolk, Va. It was delayed after being diverted to the Caribbean to assist in disaster-relief efforts after two major hurricanes devastated the islands.

The Bonhomme Richard, which has been homeported at Sasebo since April 2012, will remain there for an undetermined period before heading to its new home in San Diego, where it will undergo maintenance and upgrades.