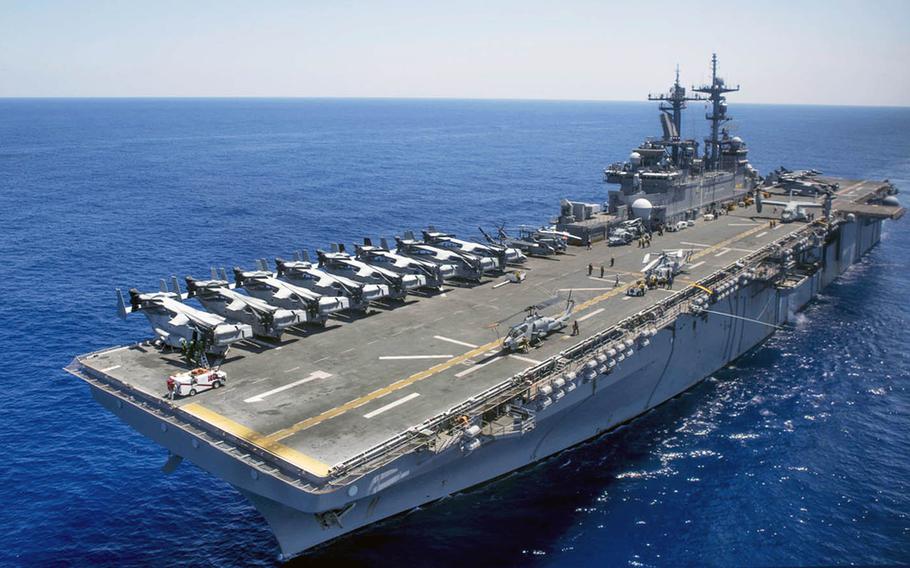 The USS Wasp will join the Navy's 7th Fleet as its forward-deployed amphibious-assault ship and will serve as the flag ship of 7th Fleet's amphibious forces. (Ryan Coleman/U.S. Marine Corps photo)

The Wasp will join the Navy’s 7th Fleet as its forward-deployed amphibious-assault ship and will serve as the flag ship of 7th Fleet’s amphibious forces, the Navy said Wednesday.

The Wasp is replacing the USS Bonhomme Richard, which has been homeported in Sasebo since April 2012. The bulk of the ships in 7th Fleet’s amphibious force are based in Sasebo.

The Navy has not yet provided a date for when the Wasp will arrive in Japan.

The Wasp brings new capabilities to 7th Fleet, and can support the next-generation F-35B Lightning II fighter, which is capable of short takeoffs and vertical landings. The aircraft are flown by Marine Fighter Attack Squadron 121, which arrived in January at Marine Corps Air Station Iwakuni.

“This move ensures that our most technologically-advanced air warfare platforms are forward deployed,” Capt. Andrew Smith, the Wasp’s commander, said in a statement Wednesday. “Our capabilities, paired with the F-35B Joint Strike Fighter, increases our Navy’s precision strike capabilities within the 7th Fleet region. Wasp will help America’s commitment to the maritime security and stability in the Indo-Asia-Pacific.”

The Wasp completed a six-month deployment last year to certify it was ready to join 7th Fleet, the Navy said. The ship’s aircraft conducted airstrikes against Islamic State targets in Libya between August and October.

The Wasp typically includes a crew of about 1,000 sailors and can embark more than 1,600 Marines. The 844-foot flattop ship employs 31 aircraft, as well as Marine amphibious craft out of its well deck.

The Bonhomme Richard is in Australia after departing Okinawa in March for its spring patrol. The ship recently participated in Talisman Saber drills Down Under.

The Bonhomme Richard will remain in Sasebo along with Wasp for an undetermined period in 2018 before heading to its new home in San Diego, where it will undergo maintenance and upgrades.