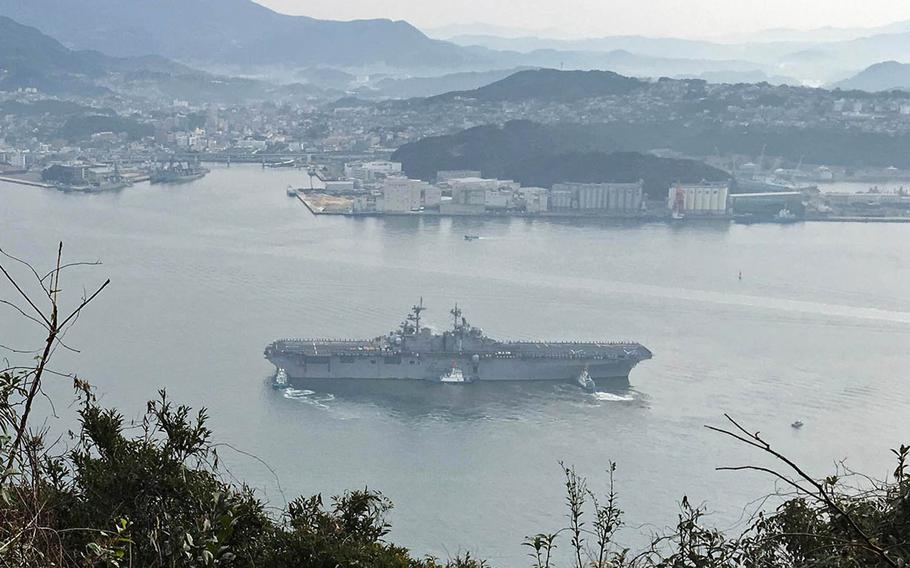 YOKOSUKA NAVAL BASE, Japan — The USS Wasp has arrived at its new homeport in Japan, bolstering the 7th Fleet’s amphibious and stealth-attack capabilities in the Pacific.

The amphibious-assault ship – which some have dubbed a mini aircraft carrier because of upgrades that allow it to host the next-generation F-35B Lightning II stealth fighter – and its crew of approximately 1,100 pulled into Sasebo Naval Base Sunday after a five-month journey from Norfolk, Va.

It will replace the USS Bonhomme Richard as the flagship of Task Force 76. The bulk of the ships in 7th Fleet’s amphibious force are based in Sasebo.

“The arrival of USS Wasp represents an increase in military capability and a commitment to our partners and allies for security and stability in the region,” Capt. Colby Howard, the ship’s commander, said in a Navy statement. “Paired with the F-35B Joint Strike Fighter, we remain ready to execute the full range of military operations from crisis response to disaster relief.”

F-35Bs, which are capable of short takeoffs and vertical landings, will embark on the Wasp when it departs for its next regional patrol, the statement added. The stealth jets are flown by Marine Fighter Attack Squadron 121, which arrived last year at nearby Marine Corps Air Station Iwakuni.

The Wasp can host more than 1,600 Marines. The 844-foot flattop ship employs 31 aircraft, as well as Marine amphibious craft out of its well deck.

Not long after its August departure from Norfolk, the Wasp was diverted to the Caribbean to assist with relief efforts in the U.S. Virgin Islands and Dominica after Hurricane Irma. It was then tapped to provide aid to Puerto Rico after the island was struck by Hurricane Maria.

Its aircraft flew 108 missions in the U.S. Virgin Islands and Puerto Rico, totaling 385 hours of flight time and moving 1,129 passengers along with 26,720 pounds of equipment and 1,718,200 pounds of various logistical support items, including 328,100 pounds of food and water, a Navy statement said.

The Wasp resumed its voyage to Japan in October, with stops in Brazil and Hawaii along the way. It also conducted drills during the transit that covered damage control, combat systems, aviation and casualty response, the Navy said.

The Bonhomme Richard, which has been homeported at Sasebo since April 2012, will remain there for an undetermined period before heading to its new home in San Diego, where it will undergo maintenance and upgrades. It is slated to participate in the Thailand-based exercise Cobra Gold next month.